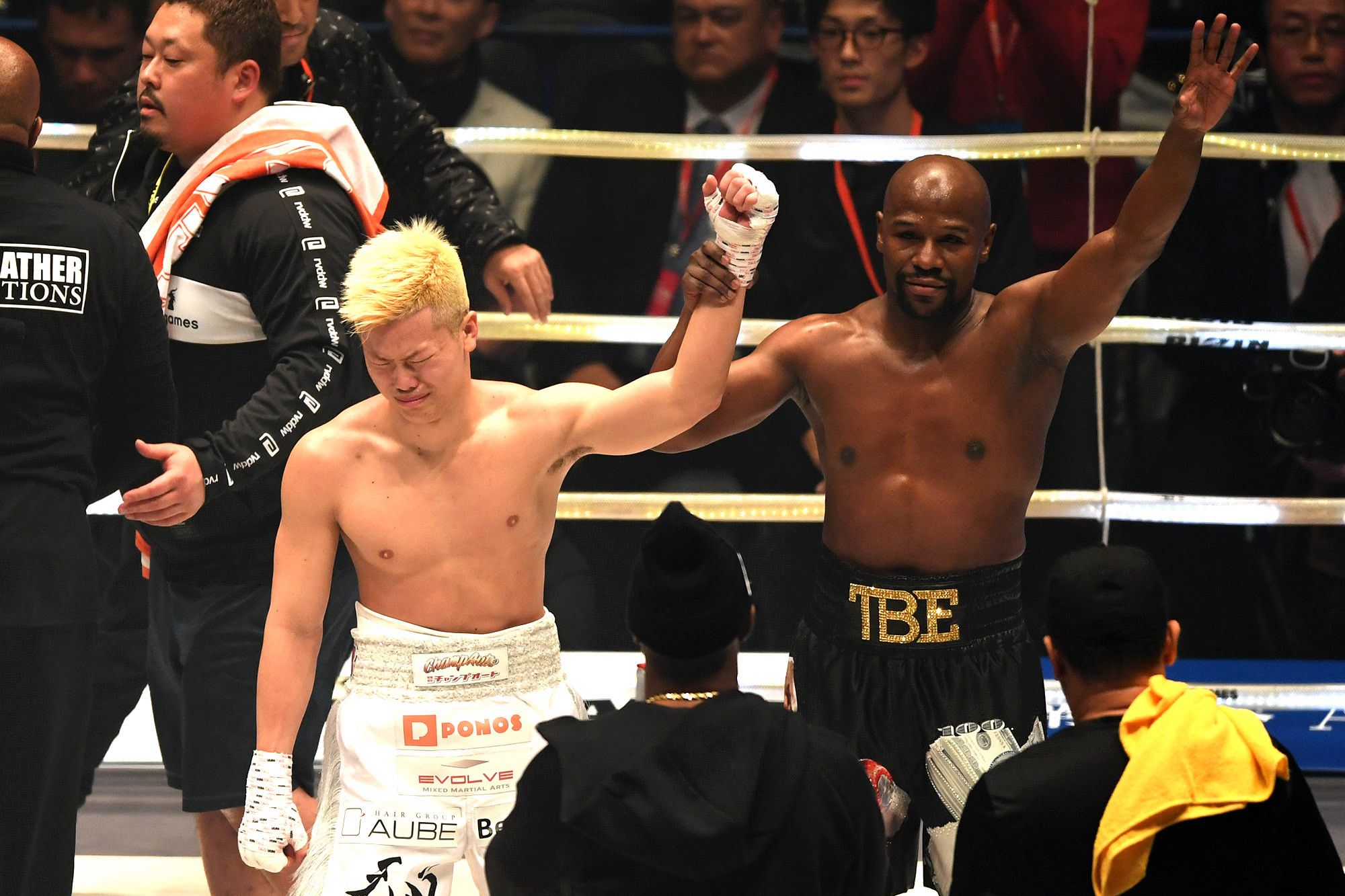 We thought that Floyd Mayweather Jr. would be coming back to fight Manny Pacquiao a second time. Well that’s what he was saying earlier this year. Mayweather then took his statement back and said that if he were to fight Manny again, he would need a tune-up fight. The next thing we knew was that Mayweather had booked himself a match against an up and coming Japanese kickboxer.

On Monday night, Mayweather made his first ring appearance since knocking out Conor McGregor last year. Mayweather made quick work of the overmatched Nasukawa by stopping him in the first round.

How Much Did Mayweather Make?

But more than the victory and the controversial nature of the fight, many people are asking how much did Floyd Mayweather Jr. make for that match or what did it take to convince Mayweather to travel to the Pacific to fight a kickboxer on New Year’s Eve? Well, making Floyd sign the contract was easy.

In anInstagram post, Mayweather revealed that he will be making $9M from the three round exhibition bout. Wrote Mayweather:

I mean who wouldn’t spar for $9M? Floyd had a point and a good business proposal in front of him so there was no reason why he wouldn’t take that offer. On the other hand, there were plenty of reasons for Money Man to take the fight.

First of all, it was an exhibition match, meaning that it would not count in the record of either fighter. Second, Mayweather won’t be fighting a boxer as Nasukawa is a kickboxer and the match was fought under strict boxing rules meaning Nasukawa wasn’t able to fight Mayweather using his full arsenal, thus putting him at a disadvantage. Third, Nasukawa was too small for Mayweather. The Japanese kickboxer has a listed weight of 125 pounds which is equivalent to a boxing featherweight. That meant Mayweather fought a guy the size of Leo Santa Cruz on Monday night in Japan.

You can also add the fact that while Mayweather was busy promoting the event in social media, it wasn’t an event that demanded plenty of his time to promote. In fact even on fight night, the people at the Saitama Super Arena didn’t know if Mayweather would actually show up because he came in late for the event. At the end of the day though, he made the most money from that event, perhaps even more than the promoters themselves.

Mayweather defeated Nasukawa in 136 seconds. If he was indeed paid $9M for the exhibition match, then Floyd made $66,176 per second. That is a truly incredible compensation for a glorified sparring session. But then that’s Floyd Mayweather Jr., the biggest attraction the sport of boxing has ever seen, the sport’s biggest pay per view star and one of its greatest fighters ever. Mayweather isn’t just a boxing great, he is a great businessman as well. He knows his value and he knows how to maximize it, money-wise.

In his most recent bout, an official boxing match against MMA superstar Conor McGregor in August 2017, Mayweather reportedly made $275M but both as a fighter and one of the promoters of the event. Mayweather earned a guaranteed $32M in what was supposed to be his swansong bout against Andre Berto in September 2015. That bout concluded a six-fight, 30-month contract with Showtime/CBS Sports which he signed in 2013. Mayweather made at least $32M agaisnt Robert Guerrero, more than $41.5M against Canelo Alvarez and a guaranteed $32M in each of his two fights with Marcos Maidana.

The biggest payout of that contract came in 2015 when Mayweather finally fought rival Manny Pacquiao in what is considered as the richest bout in boxing history. Mayweather earned an estimated $250M for fighting the Filipino ring icon in the fight that shattered financial records in boxing. May-Pac drew an estimated 4.4M pay per view buys while earning some $600M in total revenues.

Forbes.com estimated that Mayweather’s earnings before the Conor McGregor fight was in the ballpark of $700M meaning he is nearing or has already earned $1B in fight money alone, making him not just the highest paid but the richest fighter ever in the sport of boxing.

Nothing Wrong With Fighting Nasukawa

In the aftermath of Mayweather’s one-sided win over Tenshin, there are plenty of fans and so-called experts who are criticizing Mayweather for fighting an undersized kid in an exhibition boxing match. But there was really nothing wrong with what Mayweather did. It wasn’t official but it was a fight and Tenshin came in throwing punches at Mayweather. All Mayweather did was do what he was paid to do and that was to showcase his boxing skills.

For some, the fight left a sour taste but I’m not sure why people are hard on Mayweather when in 1975, the man called as “The Greatest” in the sport of boxing fought in a similar circumstance also in Japan. It can be recalled that the late boxing great Muhammad Ali fought Japanese wrestler Antonio Inoki in a 15-round fight under “special rules” which some say is the precursor of today’s MMA rules.

The fight went the full distance and ended in a draw when the judges scored the bout 74-72 for Ali, 72-68 for Inoki and a 71-71 draw. Although you could say that Ali vs Inoki was the more “real” fight because it lasted 15 rounds but remember that the final statistics were: 64 kicks landed for Inoki and only 5 punches landed for Ali. Inoki spent most of the fight on his back kicking Ali’s legs and Ali couldn’t land punches on him. In the end, fans were disappointed and threw trash at the fighters.

If you ask me, the Ali vs Inoki exhibition was just the same as Mayweather’s match with Nasukawa. But why are people saying that Mayweather traded his legacy for a $9M payday beating up a kid. Sure, Ali fought a man almost the same as him in age and size and Mayweather did not. But the bottomline is that both boxing greats went out of their league to fight in exhibition matches that mean nothing except earning a huge payday. What’s the difference really?

Some people can’t just get over the fact that Floyd Mayweather Jr. is earning ridiculous money even when he is already retired. There’s a reason why Mayweather’s nickname is Money and his team is called The Money Team. We saw why on Monday night.