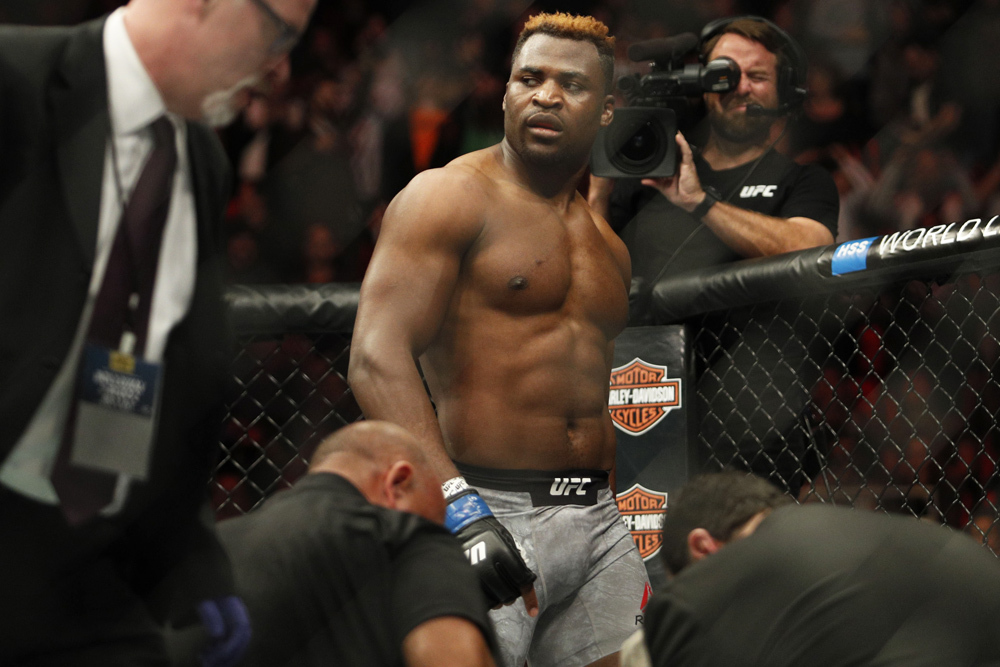 Francis Ngannou Saves What Has Been A Disaster Year For Him

After being nearly written off after back to back losses, the Cameronian Fright Train is back in business.

Ngannou knocked out Curtis Blaydes in the opening minute of their UFC Fight Night 141 main event on November 24, 2018. Needing a win to save his year and even perhaps his career, the Predator carved out a quick win in the process.

Ngannou opened the fight with a thunderous leg kick. Blaydes answered with a flurry that the predator was able to avoid. Ngannou broke away and moved back before landing a powerful right hand that landed behind Blaydes’ ear. Blaydes face-planted on the mat, tried to get back on his feet but Ngannou swarmed and landed several follow-up punches. Referee Marc Goddard gave Blaydes time to recover but while Razor survived three rounds with the Predator the first time they fought, this one was over in 45 seconds. And just like that Francis Ngannou is back in business.

2018 was supposed to be a dream year for the Predator. Instead, he spent most of it trying to save whatever was left of the aura of invincibility he took with him to start it. Now at least Ngannou can say that he saved his year on Saturday morning (night in China) and he can look ahead at 2019 with optimism.

Ngannou’s rise to stardom was as fast as his fall. He won his first six UFC bouts by stoppage and he did so in a span of two years. He earned a title shot against then heavyweight champion Miocic at UFC 220 20 days into the new year. But instead of a happy new year, it felt like like All Souls Day for him.

After fast becoming the most feared man in all of MMA, Ngannou crumbled in his first true test. Miocic wasn’t only able to avoid getting hit by Ngannou’s bombs, he took the Predator down to the ground in six out of 14 tries and grinded him to exhaustion. More importantly, Miocic only allowed Ngannou to land 21 out of 113 significant strikes while landing 70 out of 95 of his own significant strikes. At the end of the fight, the results were so one-sided: 50-44 across all judges’ scorecards that everyone quickly forgot who Francis Ngannou was.

The UFC gave Ngannou a quick chance to rebound, booking him against the injury prone, slow and plodding Derrick Lewis next. The two squared off at UFC 226 with the UFC perhaps hoping that if Ngannou won big against Lewis, there might be a slight chance that he could get a rematch against Stipe Miocic who was facing light heavyweight champion Daniel Cormier in the main event. But instead of getting a nice bounce back win, Francis Ngannou’s stock only plummeted further.

In what most experts call the worst heavyweight fight in the history of the sport, Ngannou and Lewis combined to land a total of only 31 strikes in the bout. Lewis accounted for 20 of those while Ngannou could only manage to land 11 significant strikes in three five minute rounds. It wasn’t just an awful display of fighting from both, it was a shock to see Ngannou look so tentative, even passive, against an opponent who was supposed to be a sitting duck target.

Much was talked about his loss to Derrick Lewis. Most were saying that Ngannou grew an ego problem but he was quick to dismiss it after the fight. As it was, Ngannou admitted that he let fear take over him while fighting Lewis. Said Ngannou last July via Instagram:

“I am not proud of my last performance. I have carried my fear from the last fight to this one. I completely understand the frustration & anger that it has caused to my fans, coaches, teammates, family and friends and I am truly sorry for that. I won’t let everyone down again. All I can do now is prove myself and make you proud again.”

A couple of days before he fought in China, Ngannou also talked about the pressure he felt in trying to rebound quickly from his loss to Miocic. Added the Predator:

“I was under high pressure, I put myself in some place that I couldn’t manage,” he said. “When I realised things were wrong I just took a step back. I tried to remind myself why I am here. What made me take the decision [to be a fighter]. And then I realised that it was my dream. It wasn’t a random choice. What made me be here? It’s my talent. At some point I forgot that thing.

The Predator Is Back

On Saturday night in Beijing, far away from the limelight and Fighting on Fight Pass instead of a pay per view event, Francis Ngannou not only made his fans proud again, he put his rare talents to use by letting his hands go. And when a man who possesses that kind of otherworldly power in his fists, you bet he needs only one punch to alter destiny. From being a flash in the pan, Ngannou became a flash of brilliance in a span of 45 seconds. And just like that, the fear is gone. The doubts are gone. And Francis Ngannou is back in business. Said the Predator after the fight:

“You think this is very easy and then you get disappointed when you realize it’s not that easy. So it’s good, but I really know what I want and then I really keep my eye focused on my real motivation, so yes, it was good.”

It’s never easy in the heavyweight division, not at all. Prior to Miocic no champion had defended the title more than two consecutive times. Miocic defended his belt three times and that was the UFC record. Current champion Daniel Cormier has defended it once. It remains to be seen who he defends it against next and if he’ll even get to two.

As for Ngannou, he knows that even if he made a statement against Blaydes, it isn’t going to give him another crack at the title, at least not yet. This time around, Ngannou was the first to admit that it isn’t the time year to get another shot at the gold he failed to win last January:

“Right now, [Cormier] is the champ of the division and then for my last few fights, I didn’t do great, so I don’t think I’m gonna have that chance now,” Ngannou said. “So for these two fighters, I think the one that I can have would be Stipe”

Miocic is linked to a fight with former two-time UFC heavyweight champion Cain Velasquez right now. But with Francis Ngannou making a huge statement on Saturday, who knows if the UFC is going to do a detour and book the Miocic vs Ngannou rematch instead. Miocic won’t be a walk in the park. It will be a tall order. I’m not sure if Francis Ngannou has grown the additional skills to beat Miocic if they fight a second time.But with Ngannou exorcising his demons on Saturday night in China, you can never say never to that kind of punching power. Never.