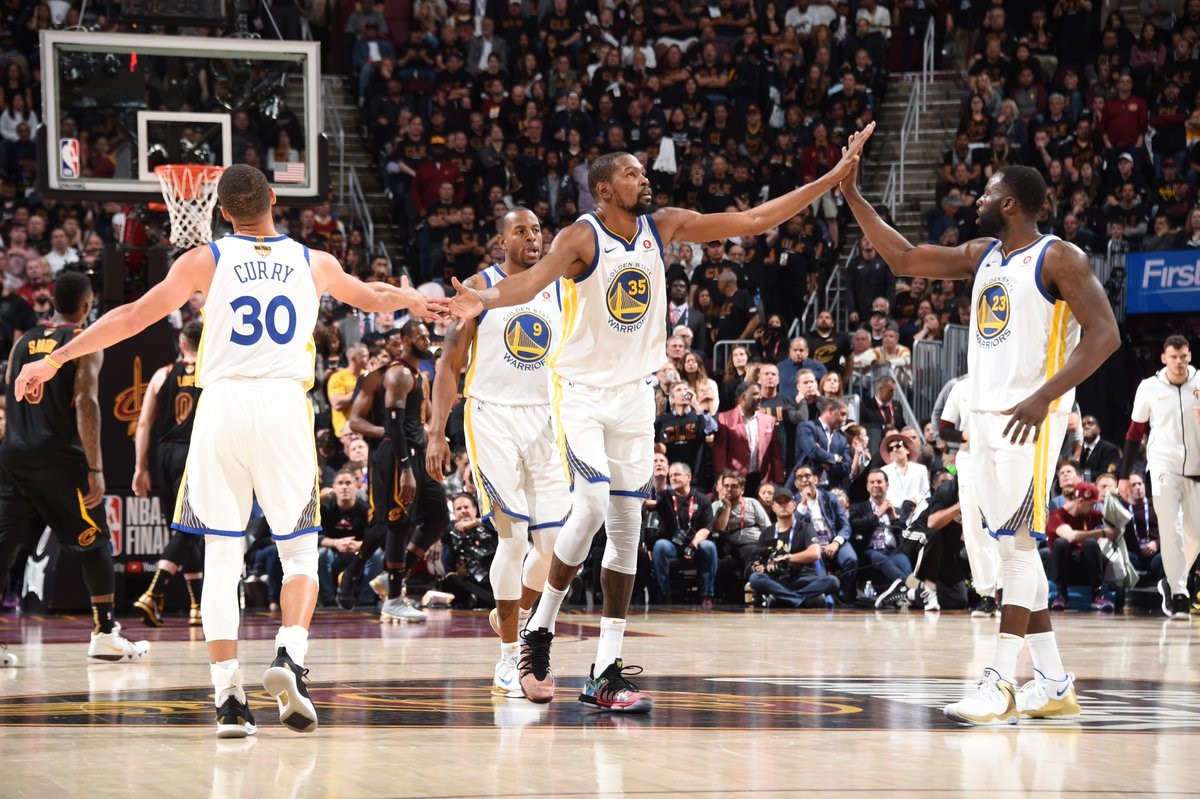 Game 3 of The NBA Finals: Deja Vu For The Cavaliers

In Game 3 of the 2017 NBA Finals, Kevin Durant hit a clutch three point basket with 47 second left in the fourth period. That basket completed the Golden State Warriors’ comeback from a six point deficit in the final three minutes of the game. The Warriors went on to win Game 3 118-113 and to take an insurmountable 3-0 lead over the Cavaliers. The Cavs would have a token win in Game 4 before the Dubs won the NBA title in Game 5 at their home floor in Oakland.

Fast forward to Wednesday night and the Warriors were in a similar situation: up 2-0 on the Cleveland Cavaliers and trying to steal Game 3 at the Cavs’ Quicken Loans Arena. The scenario in the end game was quite different. The Warriors already had a three point lead 103-100 when Kevin Durant was put in a familiar situation. The 2017 NBA Finals MVP buried a 33 foot three pointer that put the game away for good. The shot was taken from almost the same spot Durant took his Game 3 dagger basket from a year ago.

Different score scenario, almost the same spot where the shot was taken, same game numbers, same building, same shooter and same result. And yes, the Warriors are also now up 3-0 like they were last year after Durant’s clutch three pointer. 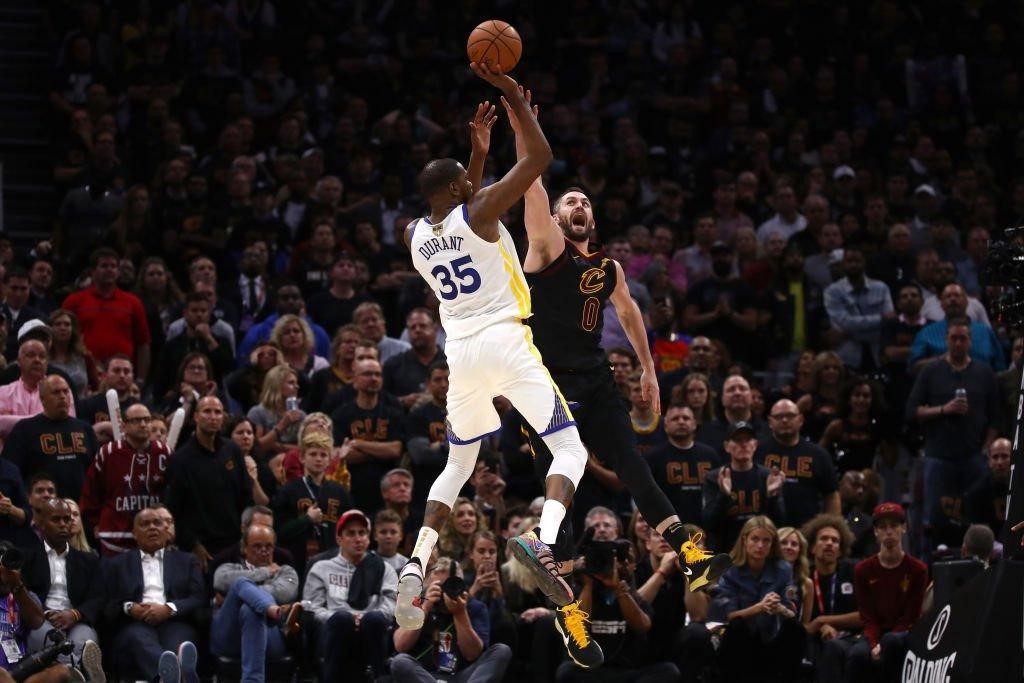 In 2017, Durant finished with 31 points, 9 rebounds and 4 assists on 10-18 shooting from the floor and 4-7 from behind the three point line. On Wednesday night, Durant finished with a playoff career high 43 points, 13 rebounds and 7 assists. KD shot 15-23 from the field, including 6-9 from behind the three point area and 7-7 from the free throw line. Durant became the 6th player in NBA Finals history to record a 40-10-5 game in the NBA Finals.

Stephen Curry had been the Warriors MVP in the first two games of the 2018 NBA Finals but on Wednesday, the two time NBA MVP struggled to find his range. Curry finished with 11 points on 3-16 shooting, including a horrendous 1-10 from the three point area. But Curry scored five very important points in the final minutes of Game 3, including his only three point basket that gave the Warriors a 101-97 cushion with 2:38 left to play in the game.

Like Curry, Klay Thompson struggled to find his shot. Thompson finished with 10 points on 4-11 shooting including 2-5 from behind the three point area. But with the Splash Brothers hitting bricks in Game 3, the Warriors turned to their other MVP to push them to a 3-0 series lead. 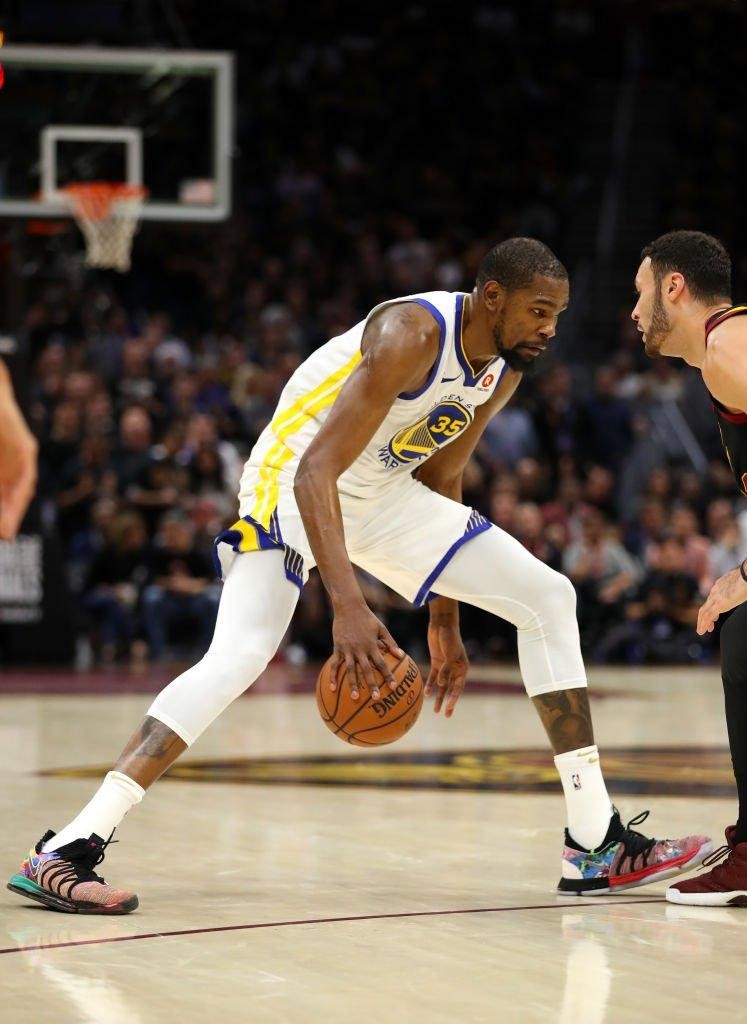 Without Kevin Durant, the Cavaliers would have won Game 3 hands down, by a blowout, as the Cavs opened the game looking for the quick knockout punch. The Cavs played so good early that they built a 10 point lead at the 7:57 mark of the first quarter. That was the earliest time in a game this season where the Dubs trailed by double digits.

Golden State also got a huge boost from Andre Iguodala who returned to action for the first time since Game 3 of the 2018 Western Conference Finals. Iguodala had been nursing a knee injury and didn’t look 100% in Game 3 but Steve Kerr rode him down the stretch and the 2015 NBA Finals MVP delivered the goods.

With the Dubs up by just one at 98-97 and the Cavs in possession, Iguodala stole the ball from Kevin Love and that led to a Steph Curry three pointer off a Draymond Green assists. On the Warriors’ next play, Iguodala moved well without the ball and got an open dunk to give the Warriors a 103-100 lead.

Iguodala finished with 8 points, 2 rebounds, 1 assists and 1 steal but more than his statistics, It was his presence that helped spark the Dubs. Golden State has outscored Cleveland by 141 points with Andre Iguodala on the court in their previous three NBA Finals meeting. That’s the highest plus-minus of any player from both teams in the last four installments of the NBA Finals. Iggy was a +14 in Game 3 on Wednesday night, asserting his status as one of the most important players for the Warriors. 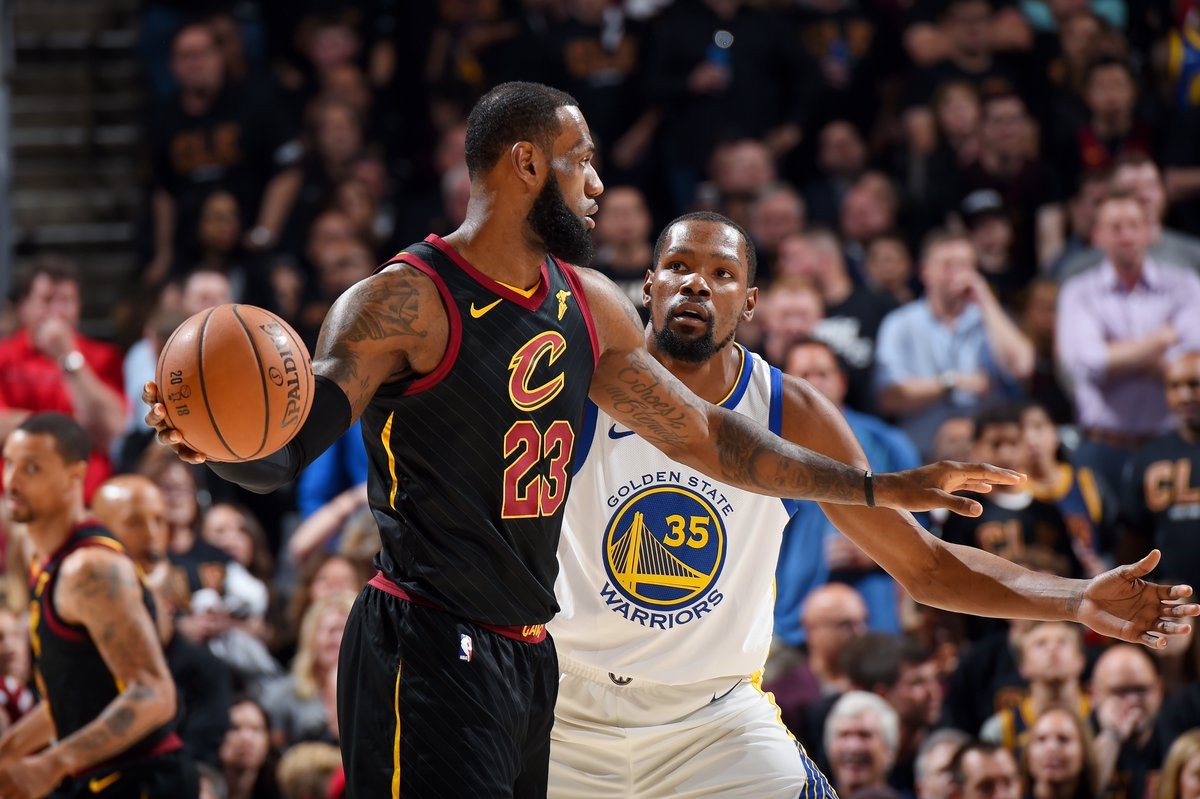 It was another heartbreaking loss for the Cavaliers who looked like they were going to get back in the series with a strong first half. LeBron James led the Cavs again with 33 points, 10 rebounds and 11 assists. It was James’ 10th triple double in the NBA Finals, making him the only player to have at least 10 triple doubles in the NBA Finals.

James was a beast early as well as Kevin Love who finished with 20 points and 13 boards but the Cavs offense sputtered when they needed to score most, enabling the defending champion Dubs to take an insurmountable 3-0 series lead. No team in the history of the NBA playoffs has ever come back from a 0-3 hole to win a best of seven series in any round of the playoffs.

Cavs’ coach Tyronn Lue promised to give Rodney Hood a chance to contribute for the Cavs and the former Utah Jazz player delivered. Hood finished with a playoff career high 15 points on 7-11 shooting. J.R. Smith, whose Game 1 blunder cost the Cavs the game and probably the series, did his best to redeem himself with 13 points and 3 steals but he too could not find his shot in the end game.

Too Much To Overcome 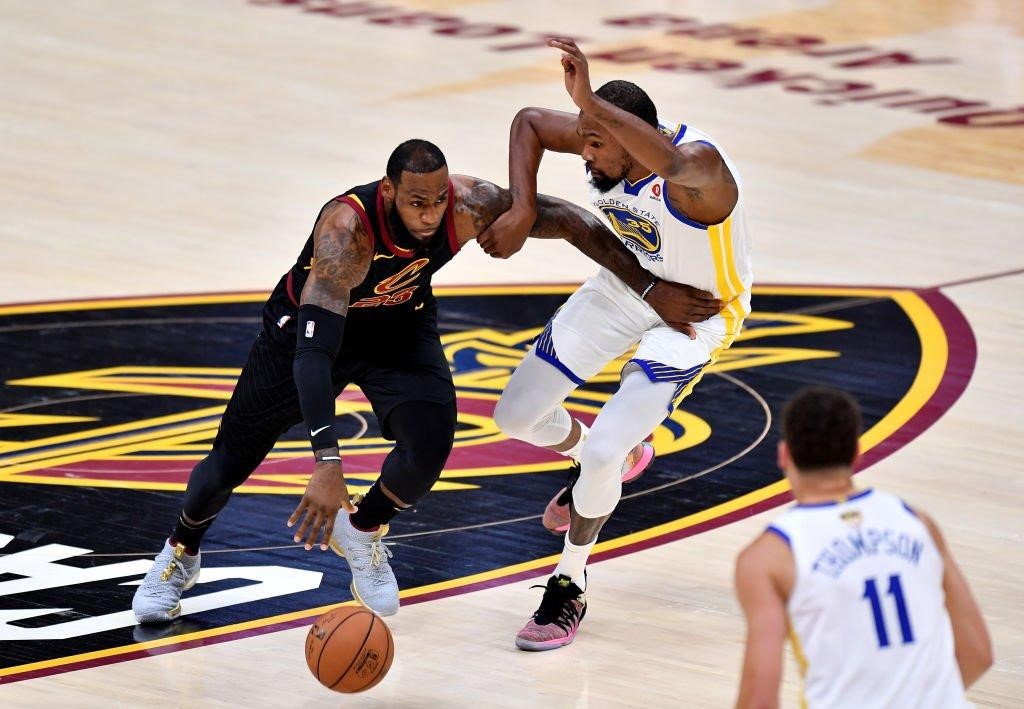 A lot was expected from the Cavaliers in Game 3 with the change in scenery. The Cavs are a much better team at home than on the road during the 2018 NBA Playoffs. Entering Wednesday night , Cleveland was 8-1 at the Q and are averaging 105.8 points at their home floor as compared to being 4-7 away from home this postseason. They came up a little bit short, again and now are faced with a near impossible task of overcoming a 0-3 deficit which has never been done before.

The Warriors have now won at least one road game in their last 19 consecutive playoff series. That’s tied for the longest such streak ever. The Miami Heat have also won a road game in 19 straight postseason series since 2011.

Game 3 was also the 8th time in LeBron James’ career where he’s faced a 0-2 deficit in a best of seven playoff series. Although his 3 wins in those situations are tied with Robert Horry and Derek Fisher for the most in NBA postseason history, things look bleak for the Cavs. This is the second consecutive season where they’ve fallen behind 0-3 in the NBA Finals and the Warriors are the first team in NBA Finals history to take 3-0 leads in consecutive seasons.

Last year, the Cavs were able to salvage a win in Game 4 before the Dubs wrapped up the series in Game 5. Given that the Cavs lost a heartbreaker in Game 1, got dominated from start to finish in Game 2 and now have seen Kevin Durant beat them again in Game 3 with a dagger three point basket, the mental side of things may be too much for the Cavs, even LeBron Jame, to overcome.