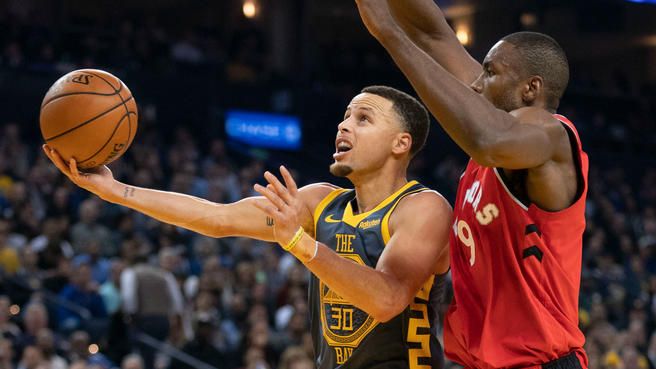 For the first time in their consecutive championship runs, the Golden State Warriors will not face LeBron James in the Finals. But there’s no getting relaxed here as a peak-performing Kawhi Leonard and the Toronto Raptors await the defending champs for the right to lift the Larry O’Brien trophy at the end of the series.

The immediate spotlight shines on the recovery of Warriors star forward Kevin Durant from a calf injury. While there’s already confirmation that he won’t be playing in Games 1 and 2, his potential return at the Oracle Arena for the next couple games will be a needed boost for the banged-up Warriors. It will also be interesting to see how Kawhi’s brilliant postseason performance will carry over to this series as he will be the Raptors’ greatest shot at preventing the Warriors from capturing the coveted three-peat.

After Durant appeared to sustain an injury that will keep him out for at least a couple of weeks, everybody counted out the Warriors and began fantasizing on the idea that James Harden and the Houston Rockets will finally break the Dubs curse. Battling a badly dislocated finger, Curry came alive in the right moment as he put on a historic 33-point second half performance during the series clincher against Houston. Then the two-time MVP would outduel Damian Lillard in the conference finals, silencing anyone who had the guts to immediately cross out the defending champs after the KD injury. Now facing the upstart Raptors, Curry will be hard-pressed to deliver again. It remains to be seen if Raps head coach Nick Nurse decides to put Kawhi as primary defender on Curry or if he goes with a smaller defender like Lowry or VanVleet to preserve Kawhi’s energy. Either way, I see Curry lighting up Toronto in Game 1. With how he has been stroking the ball as of late, it’s almost inevitable that we will witness a Curry cooking show in this series.

How quickly has Lowry made us forget about his 0-point lackluster outing during the Raps’ Game 1 loss against the Orlando Magic in the first round? Lowry has regained his signature confidence and bravado particularly in the Milwaukee series, wherein he has put up a stellar 47% clip average from beyond the arc. Already a folk hero in Toronto, he has the golden opportunity to put a stamp on his legacy as a Raptor by stealing the chip from the defending champs. It’s easier to imagine Nurse putting Lowry onto Curry in this series as the latter always gets his shots off the motion, so I don’t think Kawhi will be the main defender against the Warriors gunner. Sure, there will be multiple switches on defense but Lowry has the excellent ability of fighting through screens and make it harder for Curry to get to his spots. At the offensive end, Lowry also has to put tremendous pressure on Steph by constantly driving to the lane and not hesitate in shooting the ball.

Fred VanVleet is shooting a stellar 14-17 clip from three-point territory. Up until the last three games of the Milwaukee series, the Raptors’ second unit was laughed upon for their lackluster performances. Leonard was doing the heavy lifting for the previous two series, and it seemed like the Bucks will beat the Raptors just by sheer depth alone. They beat Milwaukee in Game 3 as most people expected. But it came as a shock that they managed to win Game 4 as it turned the tables for good in the series. VanVleet has been very instrumental during the latter part of the Bucks match-up, hitting 82% of his 17 triples in Games 4-6. It quickly reminded us why the 25-year old back-up scoring point guard is highly-regarded before this season began. We didn’t imagine saying this right now, but Toronto’s glaring advantage over the Warriors would be their roster depth, considering the fact that Golden State is top-heavy and will be playing without Durant on the active roster.

Steph and Draymond each recorded a triple-double in Game 4 against Portland. The Warriors originals are back. There’s no better time for them to finally morph again into the freight train that they were a couple of years ago before Durant came to the picture. This is not a knock on KD, but it’s just a welcome sight to see the Dubs relying again on their swiss knife core to turn back an upstart Blazers team. People may be very wrong when they say that the Warriors are harder to beat without Durant, but it’s true that their ball movement has become smoother these past few games and it has everything to do with the excellent play of Green and the sweet shooting streak that Curry is currently on.

Scotiabank Arena may be the most difficult arena for a road team to hack out a win right now, but this is the Golden State Warriors squad we are talking about, winner of three of the last four world championships. Without KD, they buckled up and eliminated the Rockets in Texas, then proceeded to dismantling the Blazers through consecutive comeback wins at Portland. They are branded as the road warriors for a reason, and it’s because they drastically improve their level of play at their opponents’ arena during the most important times of the playoffs. I see Lowry playing a big game in the series opener especially now that he has achieved the goal he has long wanted to accomplish in Toronto. Kawhi will be his usual dominant self on both ends of the floor, and the Raps’ stringy defense could hold back the Warriors in the first half. But the Dubs have always been a third quarter team, and they will eventually get going in the second half and escape with a morale-boosting Game 1 win in Toronto.