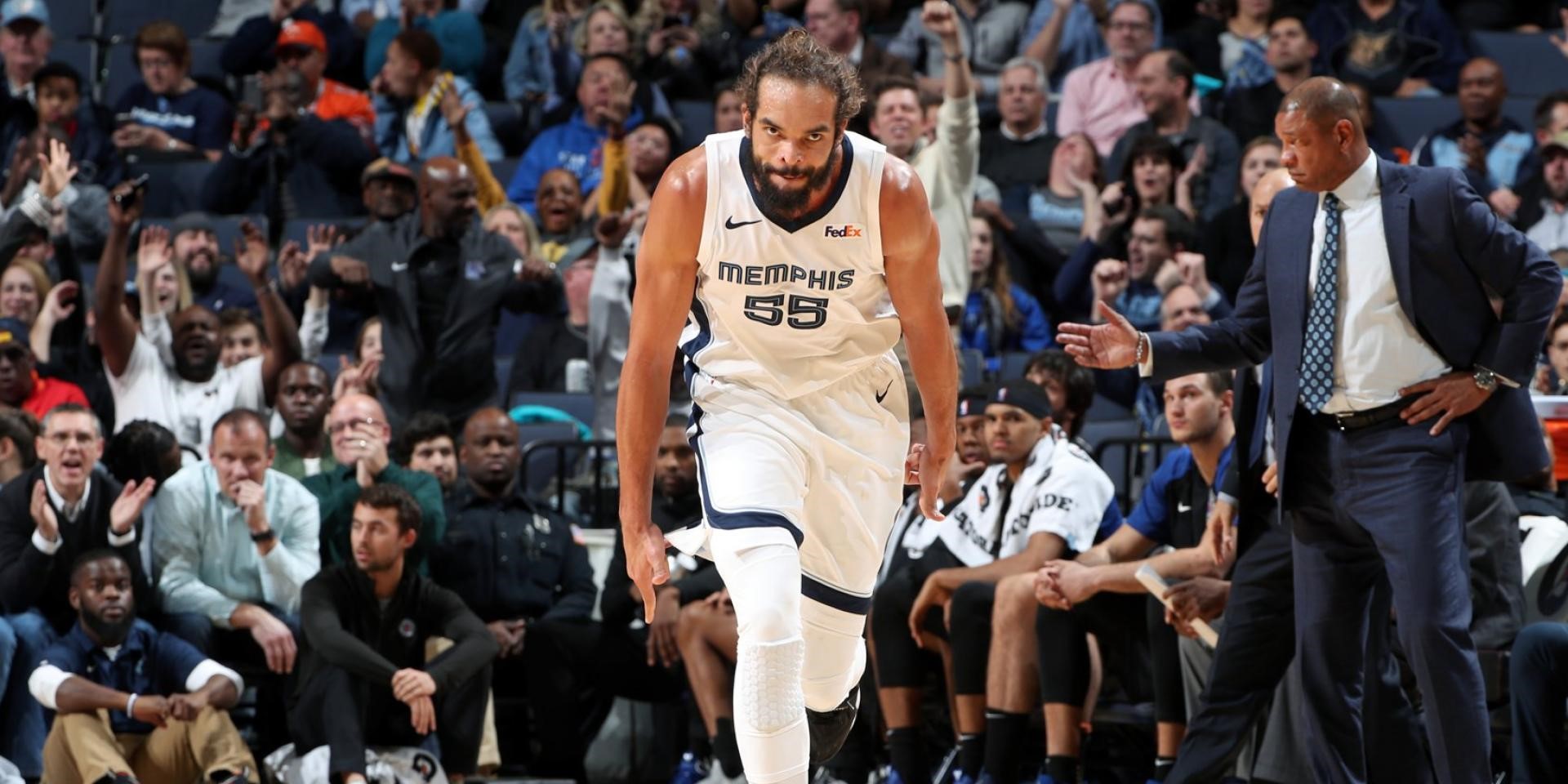 Joakim Noah is back.

The former Chicago Bulls All-Star center and Defensive Player of the Year winner signed with the Memphis Grizzlies on Tuesday. Memphis inked Noah to the veteran’s minimum of $1.73M to play back up center for the Grizzlies.

Noah was waived by the New York Knicks during the preseason using the stretch provision, ending a tumultuous and unproductive stay in the Big Apple. Noah was signed by former Knicks President Phil Jackson to a massive four year deal worth $72M in 2016 with the vision of becoming the Knicks’ defensive stopper. However, Noah never found success in New York. He ended up feuding with then coach Jeff Hornacek which led to his benching and subsequent alienation from the team. Noah and the Knicks wanted to part mutually and after the Knicks failed to find a trade partner, they ended up stretching him in the waivers.

Noah played jus 46 games in his first season with the Knicks due to injuries which included an arthroscopic surgery on his left knee. He was also suspended for 20 games for taking a banned substance. The suspension carried over to the 2017-18 season, a year where he played just 7 total games. With his NBA career seemingly over, the Memphis Grizzlies came calling. And as if he never left a game, the Memphis coaching staff showed him the faith they have in his game, putting him in action after just one day of practice.

The two time all-star made his Memphis debut during the Grizzlies game against the Los Angeles Clippers on Wednesday, scoring a pair of buckets and grabbing three rebounds. He celebrated his teammates’ feats and roared each time he made plays- both good and bad. In the end, the Grizzlies held the Clippers to their lowest scoring output of the season, 12 points below their previous season low. Noah wasn’t the catalyst really. But you could see a different vibe on defense. Grit and Grind. Said Noah after the game:

"I just got here like two days ago," Noah said. "I thought that he would wait at least until I knew the plays. I’m just happy that coach believes in me, put me in the game like that. It means a lot to me. With that said, I’m taking none of these moments for granted. Because all this time made me realize how much I love basketball.”

"It was a grimy game, and that’s kind of what Memphis Grizzlies are known to do," Noah said. "Win grimy games.”

While Noah calls it grimy, the rest of the world calls it grit and grind. That’s been always the kind of basketball the Memphis Grizzlies are known for. During the time of Tony Allen, the Grit and Grind persona made Memphis one of the best teams in the league. Allen and Zach Randolph keyed the defense that led the Grizzlies to a Western Conference Finals appearance in 2013. No question, that was the most successful era in Memphis Grizzlies history.

But like all good things do, Grit and Grind came to an end. Randolph left for Sacramento while Allen went to New Orleans. Suddenly, Memphis was left without personality and later without success. Conley got hurt and missed last season. Gasol was involved in a benching incident that led to David Fizdale’s firing. The Grizzlies finished with an ugly 22-60 record, their fewest wins since 2008 and they missed the playoffs for the first time in eight seasons.

Grit And Grind Is Back 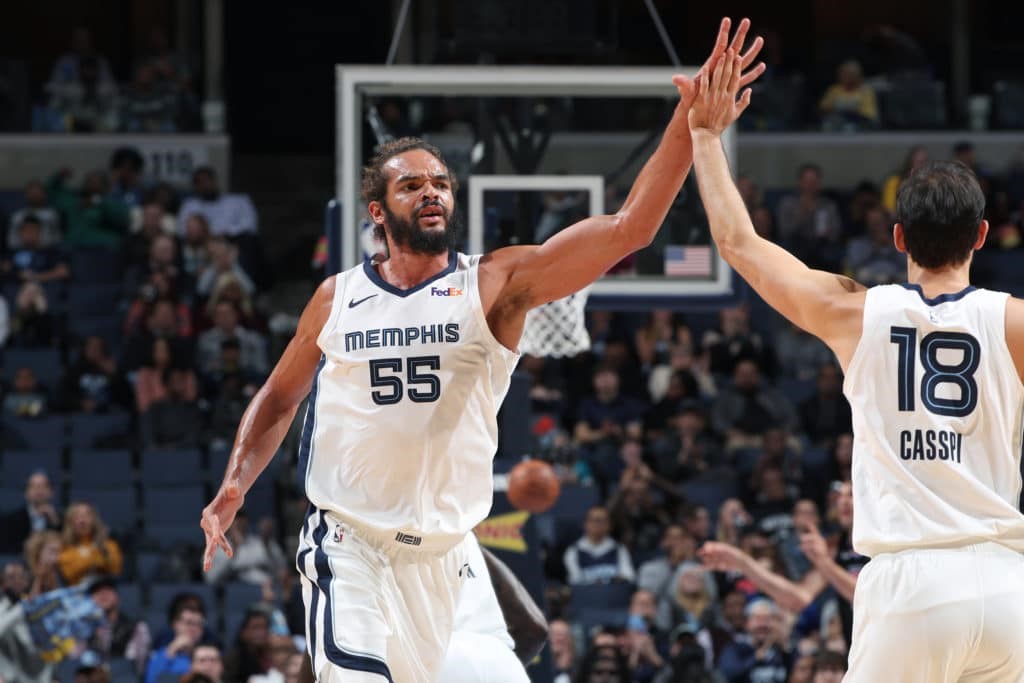 Conley returned this season and Gasol played with renewed enthusiasm under J.B. Bickerstaff. The Grizzlies are off to a 14-9 start and are currently the #1 team in the NBA’s Southwest Division. They playing solid basketball at home with an 8-3 mark at their home floor and more importantly, they are playing the kind of defense that got them to the top five years ago.

Enter Joakim Noah, the 2014 Defensive Player of the Year. At age 33, he is no longer a spring chicken but neither is he too old to grind it out inside the basketball court. Noah has a career average of 9.3 rebounds and 1.3 blocks per game. If he can just do half of that in Memphis, the Grizzlies rebounding woes would be reduced, if not solved. But it’s not only in numbers that Noah can contribute in Memphis.

Noah is a fire starter, a player that gets teammates going when he plays with plenty of emotion. That could work both ways but usually, it gets a team fired up and playing better, especially on the defensive end. That was how Tony Allen ignited grit and grind. That was how Zach Randolph got the emotions high in Memphis. That’s what J.B. Bickerstaff wants Noah to bring to his team, The numbers will only be secondary.

In his first game for Memphis, Noah played just 13 minutes. He wasn’t the difference maker. But he did show some positive signs of being a defensive force and the emotional leader that Memphis needs. Sure, Conley and Gasol are the most talented players on the team. But neither play with as much fire as Noah does. It’s just one game but if the Grizzlies’ win over the upstart Clippers was any indication, Grit and Grind is officially back in Memphis. And Joakim Noah looks like he is a good fit in his new home.