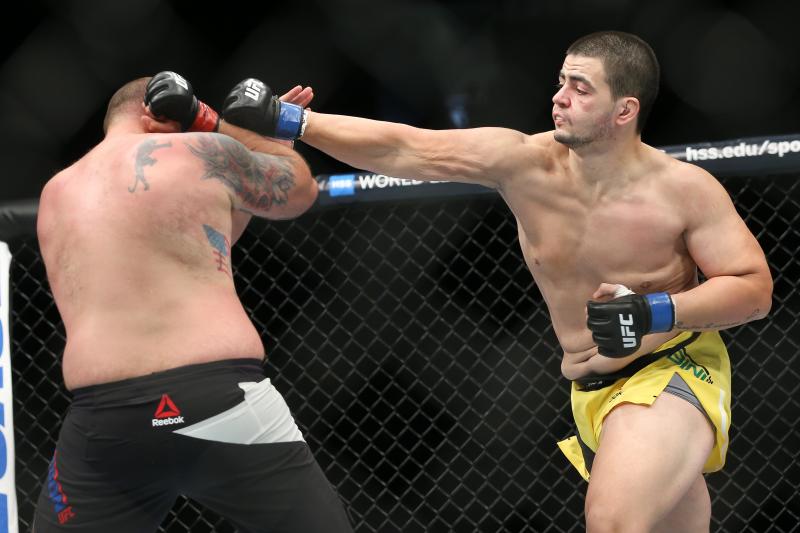 Hardwork Made The Dream Work For Junior Albini

There are moments that are special and then there are those that last a lifetime.

Chris Weidman’s victory over Kelvin Gastelum in the main event of UFC on Fox 25 was special not only because it snapped a three fight losing skid and put him right back in the title hunt but because he did it in front of his hometown fans. However, Junior Albini’s UFC debut produced a moment that will surely last a lifetime.

Junior Albini was a nobody making his UFC debut at the preliminary card of UFC on Fox 25. Prior to his first UFC appearance, Albini had fought nine times before and had won each bout. But according to him, he was never paid for a single victory. He fought so he could fulfill a long-time dream:

“It was all for free. Many times I was spending my money for the hotel, to pay for tickets, travel, everything — even food. It’s been four years that I didn’t make any money from fighting. I was just pursuing my dream.”

Making Most of The Opportunity

The +245 underdog dusted 12th ranked heavyweight Timothy Johnson in the opening round of their UFC on Fox 25 encounter at the Nassau Veterans Memorial Coliseum in Uniondale, New York. The end came at the 2:51 mark of round one after Albini rained hammerfists to his dazed opponent’s face. Before that final sequence, Junior Albini landed a perfectly timed straight right hand that sent Johnson down to the mat.

THAT'S A DEBUT! @JuniorAlbini get the KNOCKOUT win in the first on @UFCFightPass!! #UFCLongIsland pic.twitter.com/fRk6ziZuJs

With the win, Albini racked up his 8th stoppage victory in 10 unbeaten fights. He took home $10,000 for showing up and another $10,000 for the victory. To his surprise, he was awarded an extra $50K for Performance of the Night. The Brazilian felt like a millionaire. He said he never had more than $100 in his pocket before fight week. The most money he had in his wallet was when the UFC gave him his per diem for the event:

“I never saw so much money in my wallet. I never had more than $100. The most money that I’ve ever had in my wallet was when I came to the UFC and they gave us money for food. It’s unbelievable….(The UFC) gave me 740 dollars to stay there from Tuesday to Sunday, and a breakfast voucher. Most of the money I used to buy stuff for my daughter, clothes and toys. Since I was cutting weight, (breakfast) was good enough food for me.”

What was more unbelievable was what he did with the stipend he received before the fight. Albini said he bought her two year old daughter her first ever toy:

“I’ve seen people say that my dream was kind of selfish in a way because my wife and daughter were having a hard life because I insisted on this dream, but it’s hard to say anything because we went through so much together. I mentioned her toys because I’m a father and I wanted to give her that. We always gave her everything we could. My wife always believed in me and supported me. It’s surreal to be able to give back to them now.”

One could only imagine how Albini made ends meet before he was in the UFC. Raising a family in itself is no cheap thing. Toggling it with a pro bono mixed martial arts career makes it even more difficult. To have overcome that isn’t just a victory for the record books. It’s a triumph of the human spirit. It’s prevailing over suffering.

Some people fight to earn millions. Some to win championship belts. Junior Albini fought to live his dream. Sure, he was there to make a living. But more than that, he was there to prove that his struggles were worth it. And that he was worth it. Junior Albini may not earn as much in his entire career as Conor McGregor will make next month. He may not even go on to become UFC Heavyweight champion. But nobody can take away his breakout moment at UFC on Fox 25.

The fight game is a cruel sport and an unfair business. But there are feel good stories like this that transcend the game. There are fighters like Junior Albini who create these stories that touch people’s hearts. They say you are as good as your last fight in MMA. Whatever happens next in his UFC career isn’t even important. We will never forget Junior Albini’s UFC debut at UFC on Fox 25.