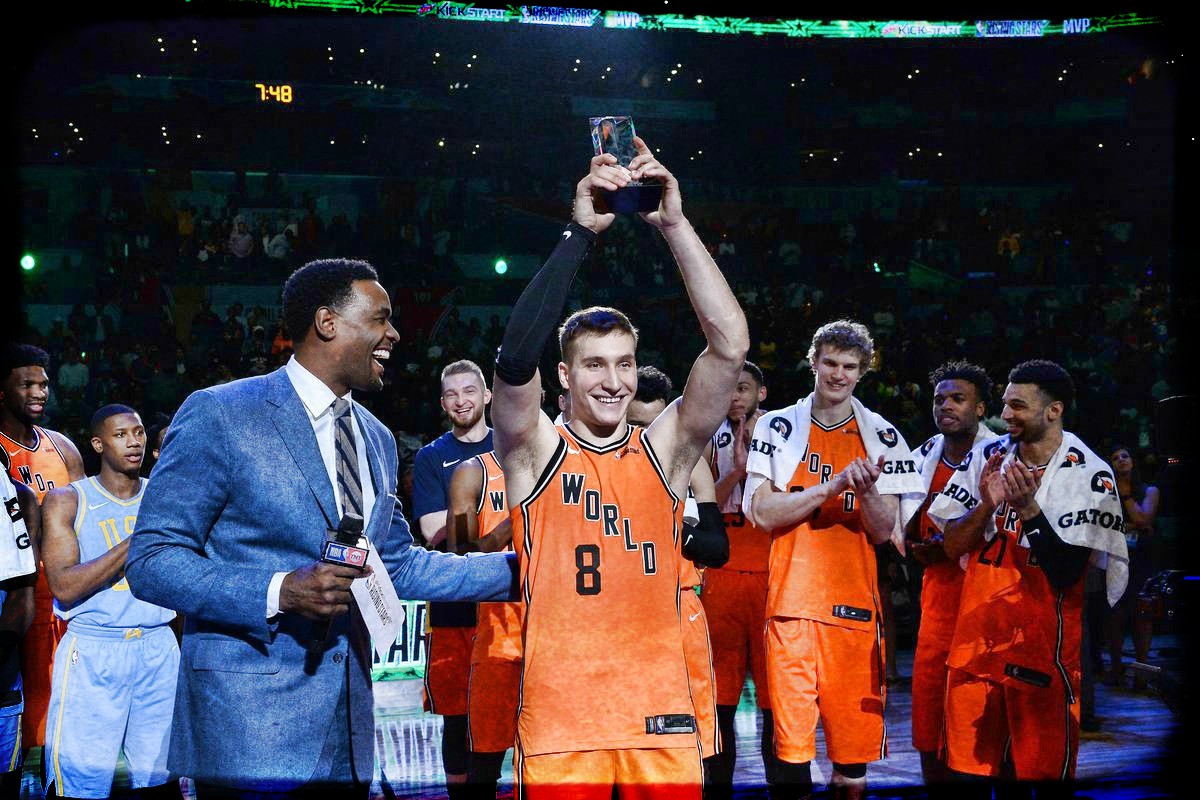 Has The Rest of the World Caught Up With Team USA ?

Among the 108 international players, 11 were from Canada and 10 from France. Another 8 came from Australia and 7 from Spain. The Utah Jazz and Toronto Raptors had seven international players apiece in their opening night rosters while the Boston Celtics and the Philadelphia 76ers have six each.

Ten of those international players set the Staples Center on fire on Friday night, leading Team World to a lopsided 155-124 win over Team USA in the Kickstart Rising Stars Challenge at the NBA’s All-Star Weekend in Los Angeles.

Team World made 64 of 109 field goal attempts ( 58.7% ) and made a total of 23 three pointers, a record in the Rising Stars Challenge. The 31 point winning margin is also the largest since 2007 when the format of the game was still Rookies vs Sophomores. It also marked the third time in four years that Team World has beat Team USA in the event’s current format.

Sure, you could credit the torrid shooting to the token defense put up by the team from the United States, but we saw the depth and the superior shooting abilities of international players, a testament to their role in the NBA in years to come. It’s also proof that after saying for so long that the world is catching up with the Americans, perhaps they have already caught up and are even better - in terms of all-around skills.

If you watched the end of the game, it became a dunk contest. And it was obvious from those sequences that the more powerful and eye catching slam dunks came from the players from Team USA. Without doubt, the Americans remain more athletic than their international counterparts. They always have been. But if their athleticism was always enough to win them international games, maybe the times have changed.

You could argue that the World team won because they were a collection of players from different nations. Sure, if the United States would put up a Dream Team, it would still likely win every major international basketball tournament today. But the point is, when you take a look at how the young players from all over the globe have evolved, they are better than their American counterparts when we talk about all-around skills.

The NBA’s unicorns are just our few examples. The likes of Giannis Antetokounmpo and Kristaps Porzingis are the kind of big men we’ve never seen before. That’s why we call them unicorns. You can add Joel Embiid to that list. Gianis is from Greece, Kristaps from Latvia and Joel from Cameroon. If they stay healthy, they won’t just be superstars in five years. They could be the three best players in the world by then.
Then we can’t overlook Ben Simmons. He has wowed us with his ability to play point guard at 6-10. Ever since 6-9 Magic Johnson, we haven’t seen someone as tall ( or taller ) run the point guard position with as much court vision and skillset. Sure, Simmons can’t shoot - at least not yet. But that will come with time. And when that happens, imagine how good he will be.

Aside from overall talent, the most glaring advantage of international players is their ability to knock down the three point shot. In the history of the NBA, we’ve seen the likes of Dirk Nowitzki stretch the floor with their ability to knock down the three pointer. Nowitzki was once labeled as too soft to be in the NBA. But don’t forget that Dirk is only the 6th player in NBA history to score 30,000 career points, the first international player to do so. With the likes of Antetokounmpo, Porzingis and Embiid and this new generation of international players, it hard to say that Dirk will be the last to score 30K NBA points.

Team World pours in 23 made treys en route to the #KickstartRisingStars victory! pic.twitter.com/LZnar6CnP8

Of the 10 players on Team World’s roster, nine of them attempted a three pointer. Of the 9, only Frank Ntilikina didn’t make a three pointer. The Knicks guard went 0-2. The 10th player on the team, Sixers’ rookie sensation Ben Simmons ( we said he can’t shoot and he knows it ) didn’t attempt a single three pointer.

Four international players made at least three three pointers. 2018 Rising Stars MVP Bogdan Bogdanovic of the Sacramento Kings led the way with 7 three pointers in 13 tries. Dario Saric, a 6-10 power forward fro Croatia came in second with four three point makes in seven tries. The total of Bogdanovic and Saric alone matched the total number of three pointers the Americans made in the game. Don’t forget too that most recently, Bulls rookie Lauri Markkanen of Finland became the fastest player to make 100 career three pointers in the NBA. That’s another feather in the cap for the international community.

Looking For The Open Man

Aside from three point shooting, the other big difference in the game was passing. Sure, this was an All-Star event and is not a gauge for the actual level of competition but if this was an indicator, then there is a big difference between how the international players view the game and how their American counterparts love to play the game.

Again, sure this was just an exhibition with limited defense. But we saw how the young players from all over the globe play the game: they look for the open man first before trying to take matters into their own hands. On the other hand, the American kids had supreme one on one skills and athleticism. A forward like Brandon Ingram, Jayson Tatum or Kyle Kuzma could dribble the ball all the way from the backcourt after a rebounds and go coast to coast with his own shot.

Not saying that the Americans are selfish because in the NBA’s leaderboard, only Ben Simmons is the international player in the Top 10 in assists. However, none of the players on the 2018 Team USA are in the top 10 with Simmons. And in the Top 20, there is only one center in the list and that is Nikola Jokic of Serbia. Speaking of Jokic, the 22 year old recorded the fastest triple double in NBA history a day before the Rising Stars Challenge. Although Russell Westbrook is still the king of the triple double, that is another testament to the all-around skills of young international players.

Based on what we’ve seen so far, this year’s Rookie of the Year contest is likely going down to a two way race between Ben Simmons and Donovan Mitchell. Simmons is putting up the better statline in Philadelphia but Mitchell leads all rookies in scoring. The difference between the two is that Simmons plays sidekick to Joel Embiid while Mitchell has taken over as the franchise player in Utah.

You could make a good argument for both and it remains to be seen who is going to win that award. But again, even if Mitchell wins it, it is another victory for the international community because Ben Simmons is Canadian and he has been the frontrunner in the race from day one.

So far only Patrick Ewing ( Jamaica ) , Pau Gasol ( Spain ), Kyrie Irving (Australia ) and Andrew Wiggins ( Canada ) are the only Rookie of the Year winners not born in the United States. But Ewing and Irving are Americans, making Gasol and Wiggins the only winner from the international community. If Simmons wins this year, there could be a chance that we could see the first back to back Rookie of the Year winners coming from outside the United States.

That’s because one of 2019’s top draft prospects is 18 year old wonderkid Luka Doncic from Slovenia. Doncic is dominating Europe unlike any other teenager in the past. And while he may not be the #1 overall pick in next year’s NBA Draft, his overall skill set is better than most who are projected to be in the Top 10. Because of that, it’s not too far to think that he can win Rookie of the Year too. But that’s going to far, talking about Luka Doncic is too far ahead.

LeBron James and Kevin Durant are still the best players in this universe. Stephen Curry is still the best pure shooter in the galaxy. Five years from now could be a different story. The NBA has gone global and with the influx of talent from other countries, the next torch bearers of basketball may no longer be from Team USA.