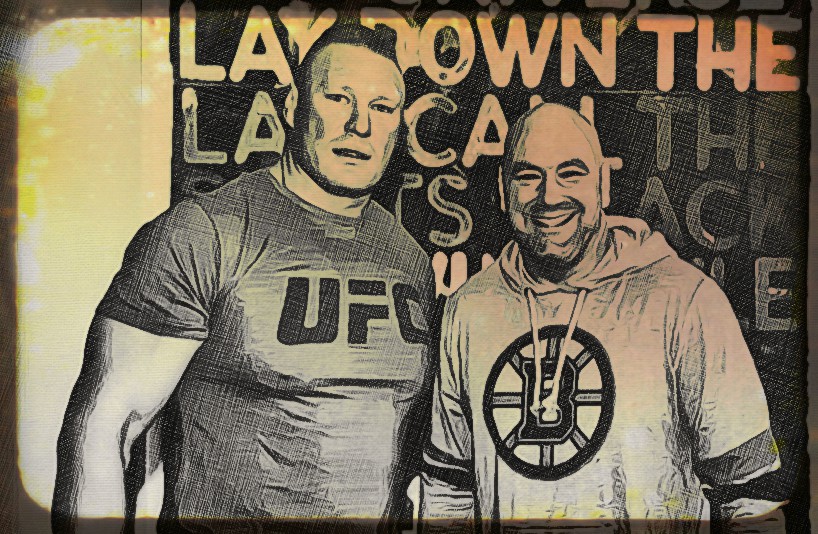 The Brock Lesnar rumors are heating up once again.

That’s how powerful a single social media post, involving an honest photo between two very powerful people can do. UFC President Dana White posted a photo of himself and former UFC heavyweight champion Brock Lesnar on his Twitter account. Lesnar was wearing a UFC shirt. And that photograph has launched a thousand ships.

The Tweet didn’t even have words, only a smiling face open mouth ( grinning ? ) emoji accompanying the picture. That’s malicious, really. It has certainly put plenty of excitement to MMA fans and some worry for WWE fans. It’s also created plenty of stories regarding the possibility of seeing the Beast Incarnate return to the UFC octagon one more time.

But while the combat sports media began to buzz again, Lesnar may only be just playing them. Remember in 2015 when his contract with the WWE was almost about to end? Lesnar walked out of a RAW taping and attended UFC 184 the following weekend. That fueled speculations that the former UFC heavyweight champion was making a UFC comeback. But lo and behold, Lesnar ended up re-signing with the WWE in 2015.

Despite that, Lesnar was given a unique privilege in 2016 to compete in the UFC octagon at UFC 200 despite being under contract with the WWE. The UFC meanwhile, helped the WWE promote the WWE 2K17 video game and the WWE SummerSlam as part of the deal. Lesnar went on to defeat Mark Hunt via decision but his return to the UFC was short-lived.

Lesnar failed two drug tests related to his victory over Hunt. He was subsequently fined $250,000 and suspended for one year by the USADA. Lesnar was eligible to return to the UFC in September 2017 but because he withdrew from the UFC’s USADA drug testing pool, he will have to re-enter it and wait for six months before he can compete again.

That means the earliest possible time that Lesnar can return is in September 2018, that is if he is really serious about making another octagon comeback. Before that, he has to fulfill his contractual obligations with the WWE. His contract is set to expire after Wrestlemania 34 on April 8, 2018 in New Orleans. What he does next is pure speculation right now. But we wouldn’t be surprised if he re-signed with the WWE again.

We’ve seen Brock Lesnar use the UFC as a leverage in his contract negotiations with the WWE. For all we know, he is merely playing us all with a publicity stunt. We know Dana White needs news right now, because the UFC has suffered so much without Conor McGregor.

Lesnar earned $6M in 2015 and according to Forbes, he doubled that in 2016. His 2016 earnings though, included the then record $2.5M fight purse to fight Mark Hunt ( Conor McGregor later topped that with his $3M guarantee for his rematch with Nate Diaz at UFC 202 ). Forbes estimates that Lesnar made $6.5M in his UFC return alone.

So there’s a reason why Brock Lesnar would want to pose with Dana White for a photo. For sure, the UFC would be getting plenty of media mileage for a single photograph. For Lesnar it also helps in his WWE contract negotiations. At the same time, he is going to use it as a gauge for a UFC comeback.

While Lesnar remains a physical freak of nature, he is already 40 years old. Despite arguments that UFC heavyweights can still be in their prime in their late 30’s, Lesnar hasn’t fought since UFC 200 and it would be impossible to determine what MMA shape he’s in if he intends to return soon.

Of course, Dana White told TMZ that he’d like to see Brock Lesnar return to the UFC. Other than Conor McGregor, Lesnar was the biggest PPV draw in UFC history. In his short stint with the promotion, Lesnar broke PPV records and attracted mammoth crowds. With the UFC’s numbers failing without McGregor, Lesnar would definitely provide some much needed spark.

White added though that if Lesnar is going to return, current UFC heavyweight champion Stipe Miocic is ‘hard to topple’. Of course he is and White knows first hand, because Miocic easily turned back the challenge of White’s over-hyped Francis Ngannou at UFC 220. But is Dana White insinuating that Lesnar would fight for the belt should he return? Or maybe he is trying to drum up a conversation about pitting two physical freaks against each other: Lesnar vs Ngannou?

The latter would be a win-win situation for White and the UFC. Ngannou is taking a breather after losing to Miocic. If he makes his return later this year against Lesnar, it’s going to be a mammoth fight both literally and figuratively. If he beats Lesnar, he gets back on track. If Lesnar wins, a dream fight with Miocic should be next. Regardless of the result and the ensuing plot, it’s going to be big bucks for the UFC.

But then again if you look back at recent events, Lesnar got an impromptu call-out from Jon Jones after Bones beat Daniel Cormier at UFC 214. ‘Meet me in the octagon’ , right? But like Lesnar, Jones failed a drug test and is currently facing suspension. However, Jones is taking his case to arbitration and will be facing the California State Athletic Commission on February 27th for a hearing. A USADA date should be next.

If all goes as planned and Bones’ tainted supplement defense is going to hold, he could also be eligible to return late this year. Now having both Lesnar and Jones available late this year may be more than just coincidence. And you bet Dana White will do his damn best to make the fight happen.

We’ve gone too far though, looking at the possibilities of Brock Lesnar’s UFC return and his possible fight if he does come back to the world of real fighting. Like we said, this could all be very much drama on his part. And yes, the latest news is, Lesnar was a no-show at RAW’s February 26th show.

Lesnar, the WWE’s Universal champion, was promoted to show up at the Anaheim, California event last night. Lesnar’s manager Paul Heyman, hinted that Brock would be announcing live on RAW that the winner of February 25’s PPV event would be his #1 challenger. Roman Reigns defeated Braun Strowman in the Elimination Chamber to virtually book a date with Lesnar at Wrestlemania 34. But Lesnar didn’t show up, to the ‘dismay’ of Reigns who called Lesnar an ‘entitled piece of crap who hides under his contract’.

Shortly before Feb. 25’s PPV event began, White tweeted the controversial photo of him and Lesnar. Early Tuesday, the WWE posted an article on its website saying they have reached Heyman for an explanation but they have not received any reply from him nor Lesnar. But while this is controversial, it also sounds like 2015 all over again, right? History is repeating itself.

Maybe the UFC has become part of the WWE’s storyline. After all, isn’t Ronda Rousey there already? Lesnar is known as the only WWE star to make the successful transition from pro wrestling to mixed martial arts. And yeah, vice versa too. Maybe this is just part of a grand plan by Heyman and Lesnar. Or maybe he has already agreed to return to the UFC. Who knows. Things may have gotten interesting.