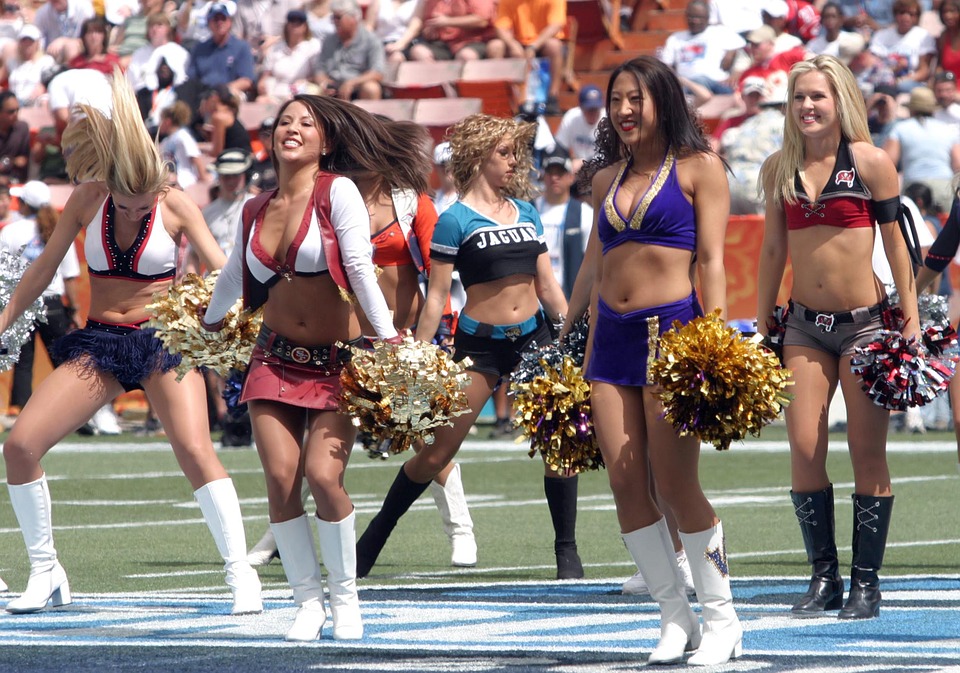 Hot NFL Cheerleaders Who Could Set Instagram on Fire

Warning: Some images may be too hot, they could start a fire. 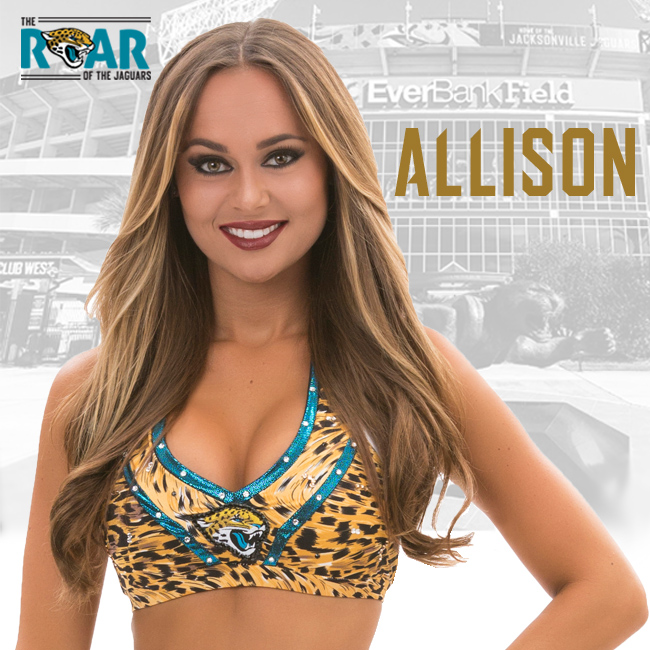 Allison has been a member of the Roar of the Jaguars since 2016 and will be headed to her third year next season.

Allison’s with the Jaguars but her favorite quote has something to do with Lions:

“ Lions do not lose sleep over the opinion of sheep.”

She is a certified medical scribe/patient liaison for Bowden Eye Associates. As such, she discusses products and surgical procedures that the company offers. She also assists the doctor in those procedures in the clinic. 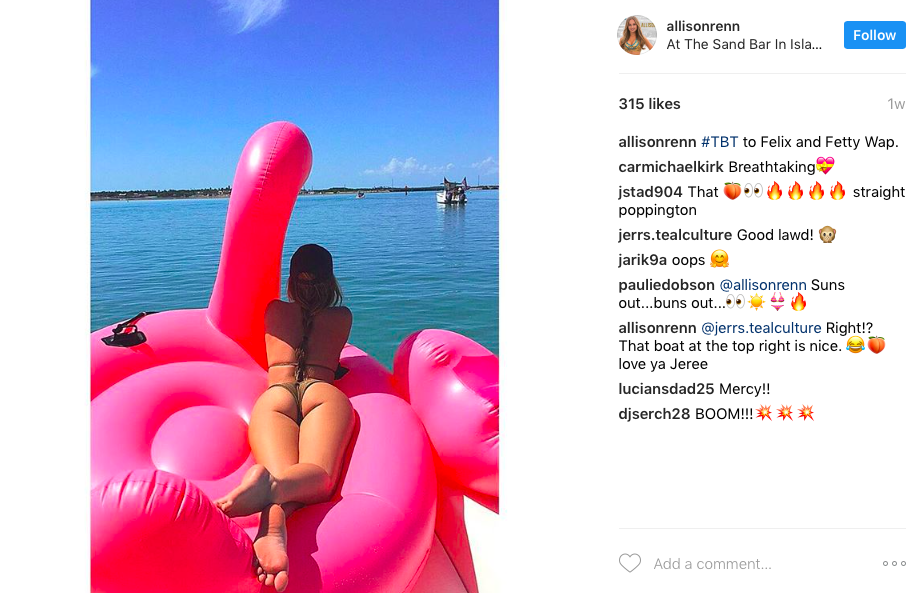 No need to get any product or eye procedure to see the great view though. The boat at the top of the picture is really nice.

Her favorite song is “Island in the Sun” by Weezer because it puts her in a good mood. Asked to pick between Taylor Swift, Beyonce or Miley Cyrus, she picked Queen B without hesitation.

She was a centerfold for North Florida’s Void Magazine Jaguars issue in 2015 and was aptly called ‘perfection’ by the monthly publication. No question about that description, really: 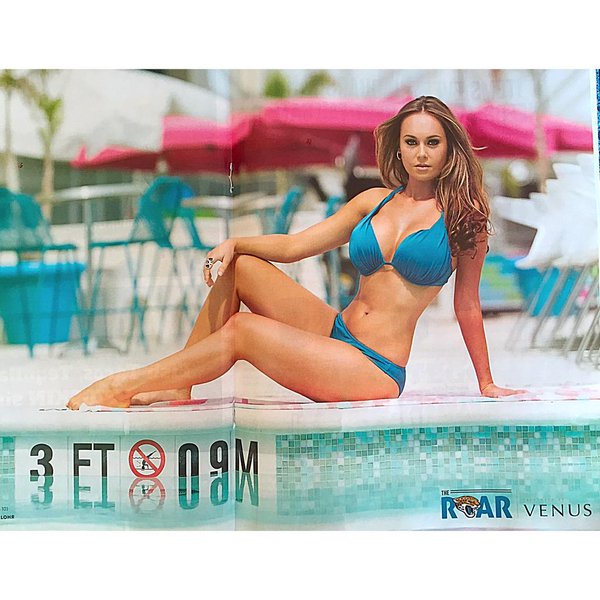 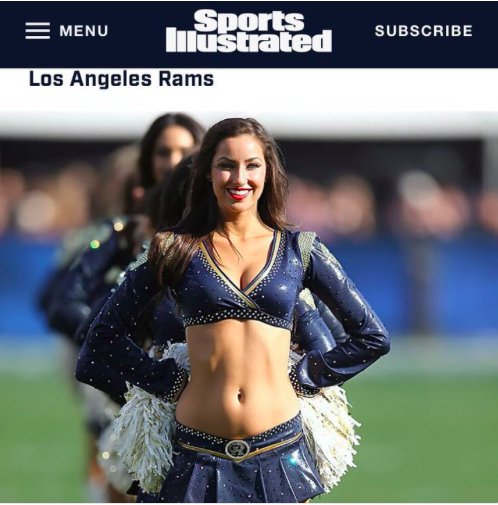 Shelbie Kovach started her dance lessons at the age of 3 and has taken part in countless dance competitions and conventions all over the country. Shelbie was a member of the Arizona State University Spirit Squad while completing her Communications and Family/Human Development degree there.

While with the Spirit Squad, she was also part of a smaller team called The Competition Team, which traveled to Orlando’s Walt Disney World annually to compete for the National title of UDA. During her senior year, Shelbie’s team finished second and was invited back to Disney to represent the United States. Kovach ended her collegiate career with a victory at the ICU World Championship Competition where she emerged as world champion in the Jazz Category.

While Dance may have been a huge part of Shelbie Kovach’s life, it’s not the reason why she’s on this list: 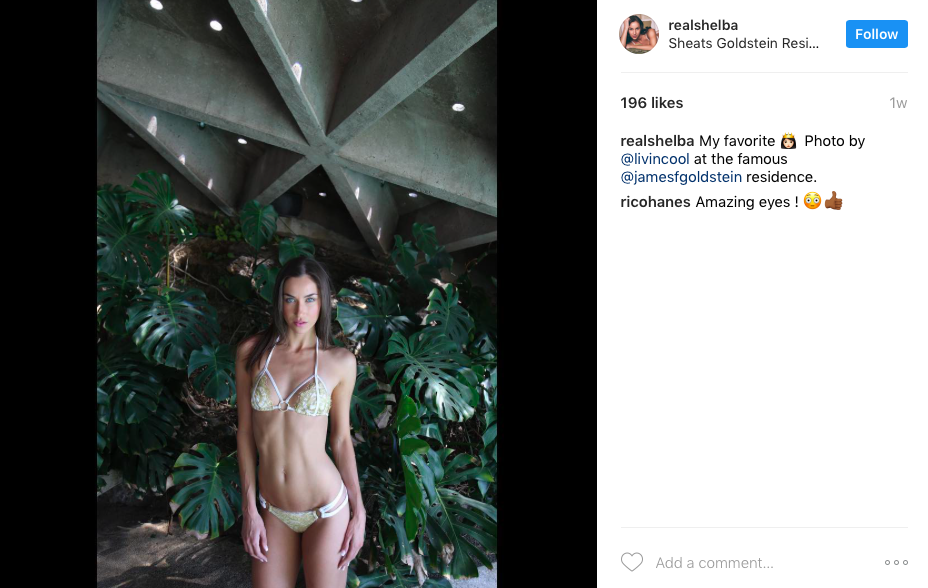 You get the point now. 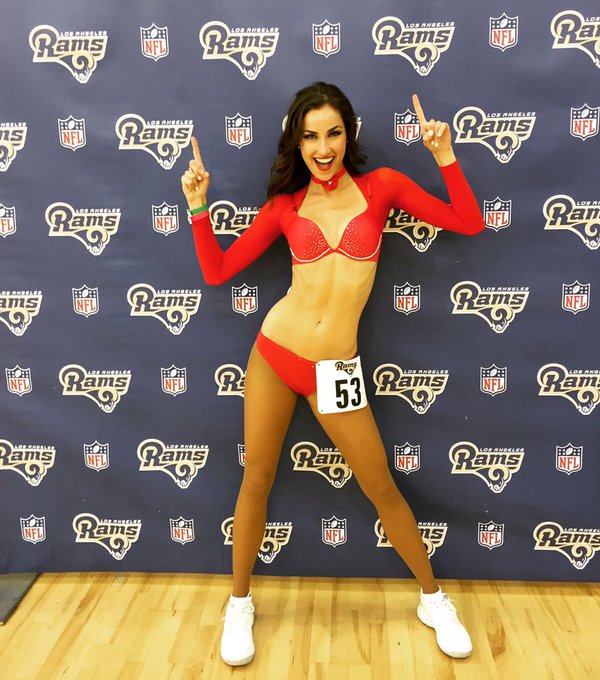 When you make the Laker Girls and the Rams Cheerleader squad, you’ve got to be extraordinary. That’s what Shelbie Kovach is. To see more of her extraordinary photos, check out her Instagram account @realshelba 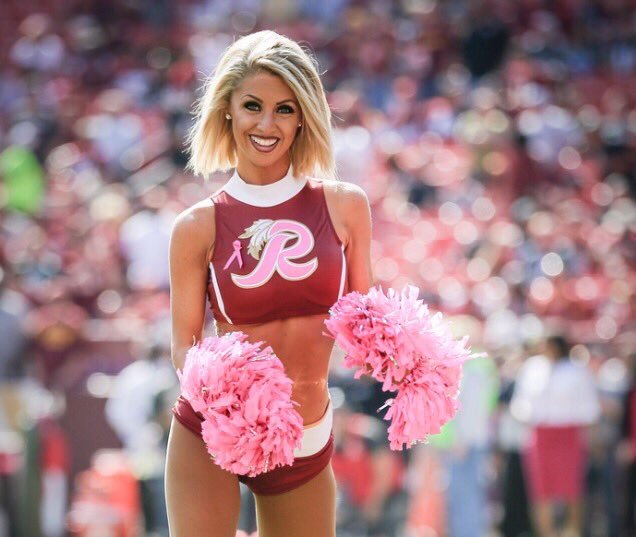 Originally from Staten Island, New York. Carissa Hudson is a city girl ‘through and through’ as she says in her Washington Redskins bio. After growing up in New York, Carissa went to miami to study Hospitality and Tourism Management at the Florida International University. She was in Miami for about five years when she says ‘fate’ brought her to one of the most powerful cities in the world-Washington D.C.

She currently works as an assistant studio manager for Orangetheory Fitness but is more popular for her role as one of the Washington Redskins’ cheerleaders during the 2016-17 season. Aside from working in the fitness industry, she likes to travel and trying out new things. In fact, her motto in life is “I’ll try anything once.” unless it involves bugs which in this case she says you can count her out.

She likes to try out new restaurants, playing golf, going jet skiing or simply snuggling up on the couch with Murphy….her German Shepherd: 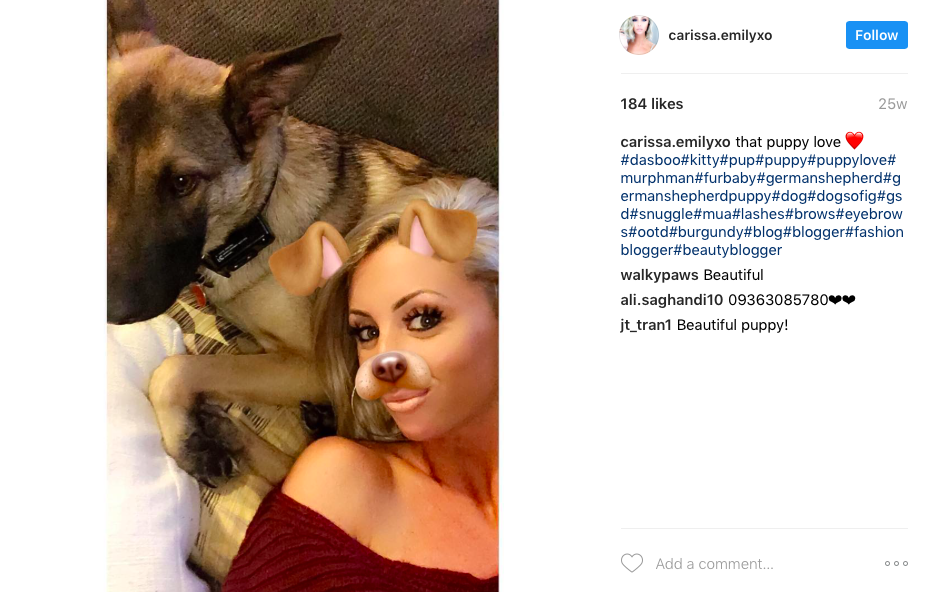 No, that puppy love photo isn’t what put her on our list, although it’s really cute that she loves animals. However, it’s images like this which you can find on her Instagram account @carissa.emilyxo which makes us love her like we do puppies: 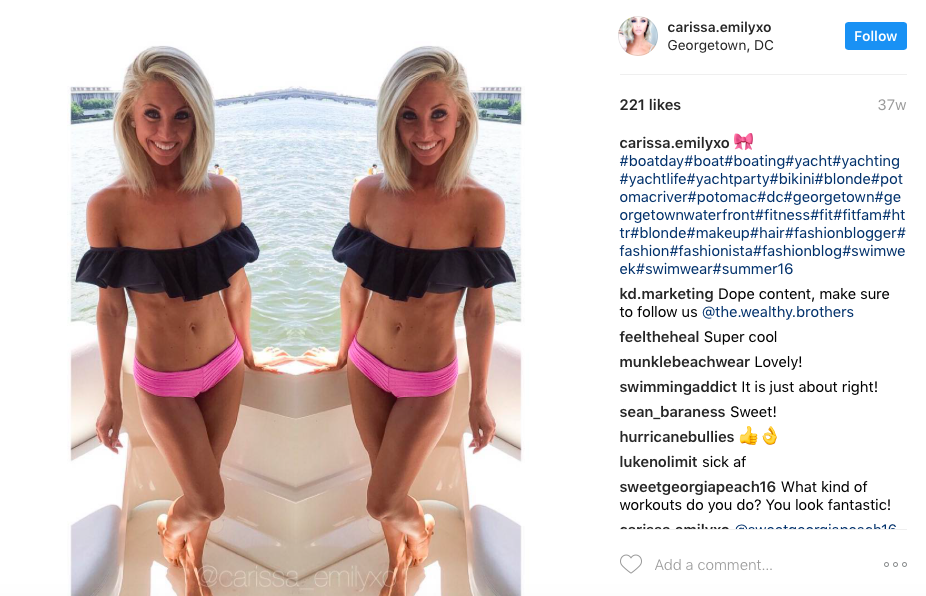 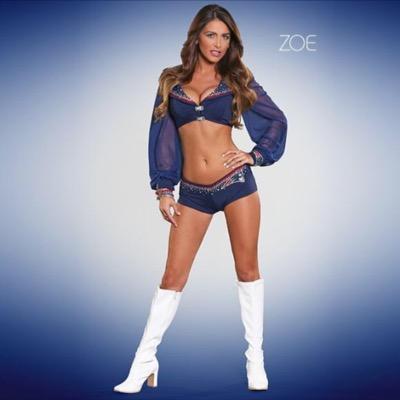 But football isn’t everything great with these New England Patriots. They’ve got some of the greatest looking cheerleaders of the NFL’s 2016-17 season. Check out long-time cheerleader Zoe Bucuvalas of the Patriots: 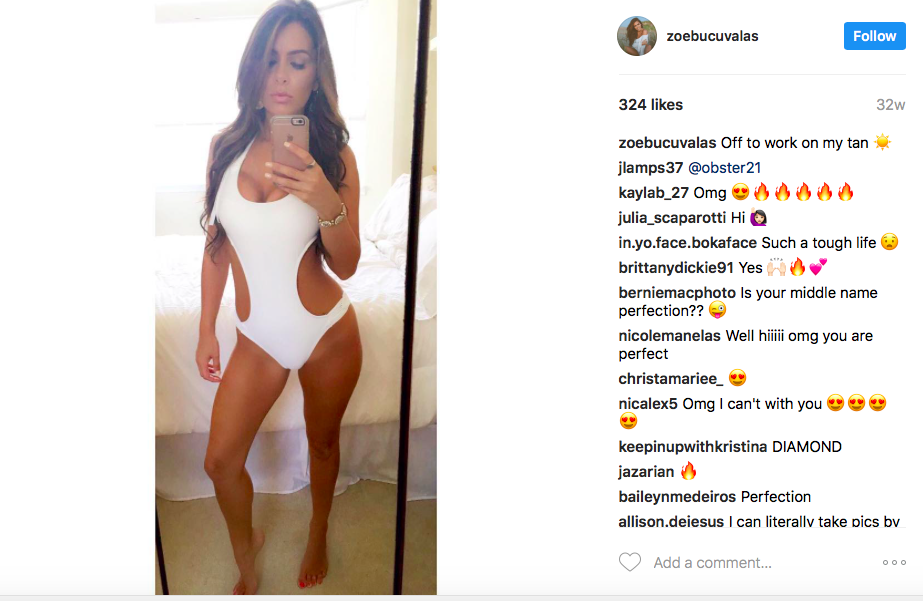 Now that’s smoking great right there folks. Would you rather watch Super Bowl 51 all over again or watch Zoe Bucuvalas’ photos in her Instagram account? That is going to be a no-contest, without a shadow of a doubt.

This Instagram hottie isn’t just your poster girl. Zoe graduated with a degree of Psychology from the University of Massachusetts Amherst. She currently works as an Operations Assistant at the Centinel Financial Group, LLC. In that role, she provides clients with ongoing services and coordinates planning and review meetings.

Aside from that, Zoe’s been a regular reporter for NESN’s Dirty Water News on TV since October 2016. 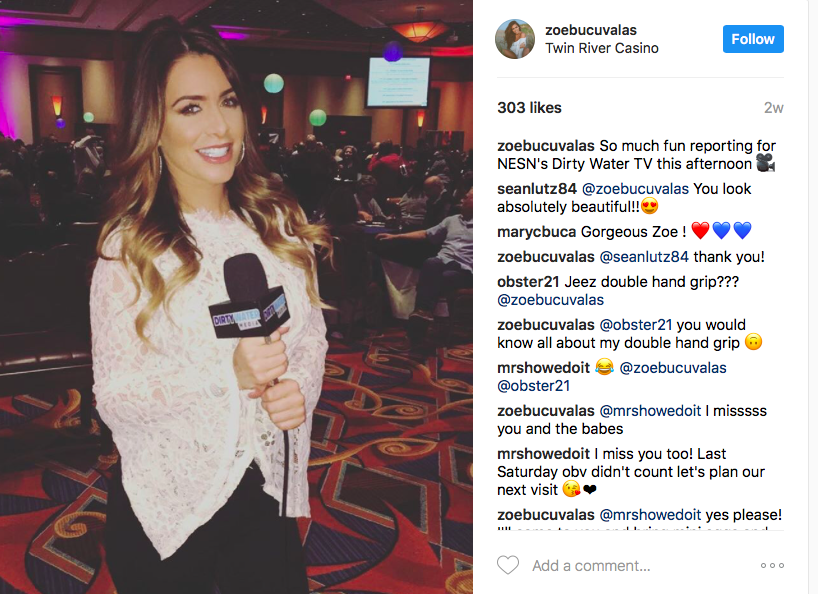 More importantly, she’s been a fixture for the New England Patriots, being a cheerleader for the Pats since 2013.* See more of Zoe in her Instagram account @zoebucuvalas. You won’t regret it, that’s guaranteed.* 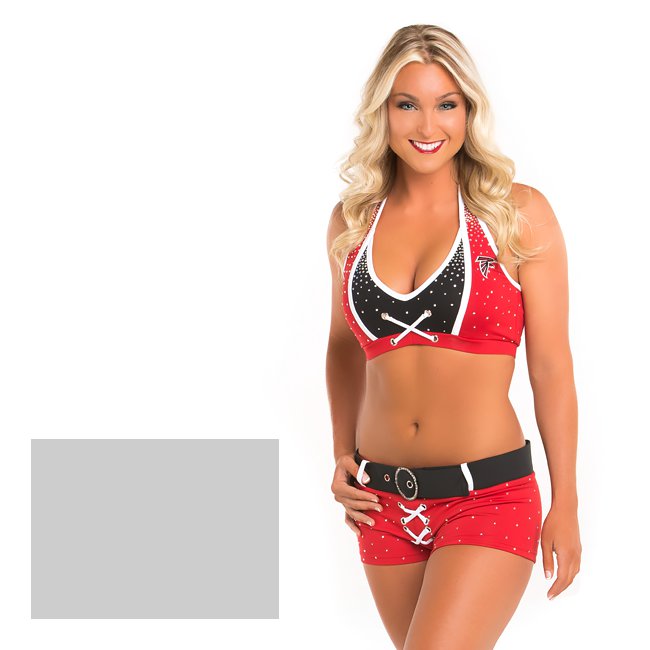 So we mentioned about the New England Patriots’ Super Bowl 51 win earlier. Blowing up the big first half lead was definitely heartbreaking for the Atlanta Falcons. This next cheerleader is a heartbreaker for everyone warm blooded.

Brianna Stade was born in Napa Valley, California but moved to Atlanta in 2013 one month after her graduation from college and after she successfully auditioned for the Atlanta Falcons’ cheerleading squad. 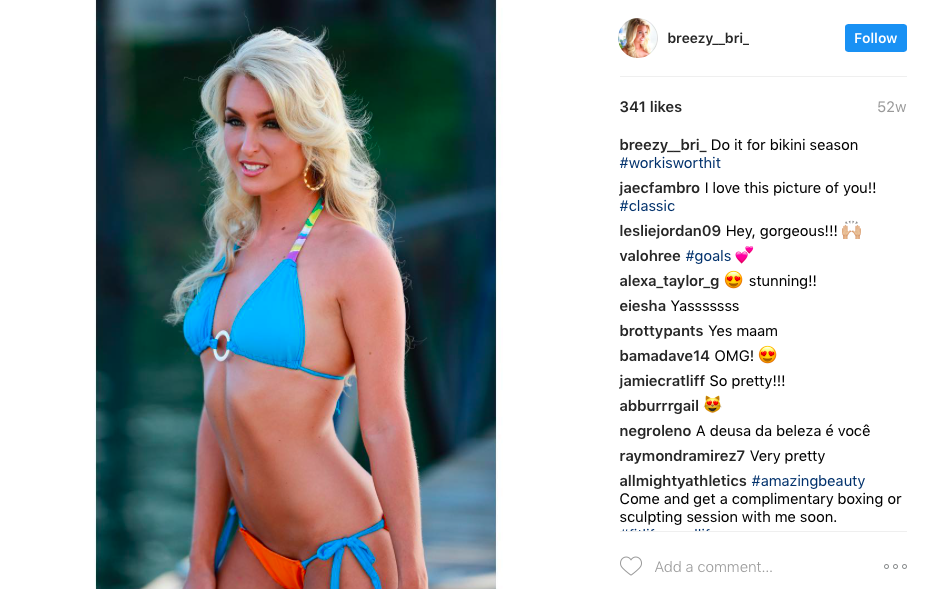 Brianna works full time as a Project Administrative Assistant for Darden & Company, LLC, a project management company that is currently watching over the construction of the Falcons’ new home, the Mercedes Benz Stadium.

Brianna loves the movie ‘How To Train Your Dragon’ and the song ‘Jubel’ by Klinande. If given superpowers, she’d love to have the ability to read people’s minds and the #1 item on her bucket list is visiting the 7 Wonders of the World. 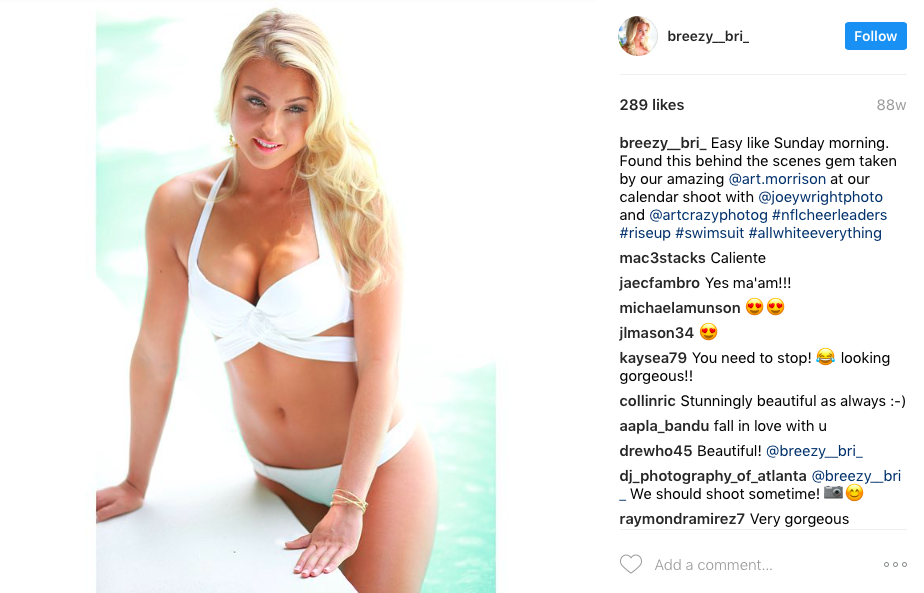 Well, this flaming hot cheerleader is a wonder herself.* You can view more of her sizzling photos at her Instagram account @breezy_bri_ .*