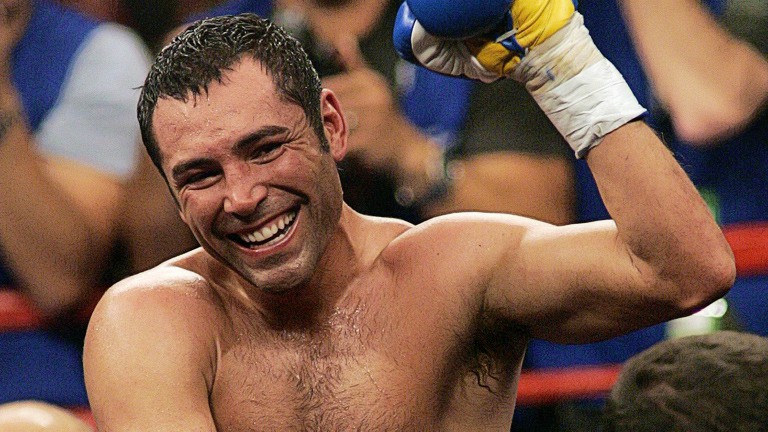 How Much is Oscar de la Hoya's Net Worth?

The first people that come to mind when we talk of boxing are Mike Tyson, Muhammad Ali, Joe Frazier, Manny Pacquiao, and Sugar Ray Robinson. Sure, they’re boxing legends, but that doesn’t mean you can forget the Golden Boy, Oscar De La Hoya.

Considered as one of the all-time greats of the sport, De La Hoya brought the sport of boxing to a whole new audience, making it even more popular around the globe. De La Hoya dominated six different weight classes and took home a gold medal at the 1992 Barcelona Olympics.

He retired at the age of 45 after 16 fruitful years of his career, making him one of the highest grossing boxers in the history of the sport.

Oscar De La Hoya was born on Feb. 4, 1973, to Joel and Cecilia De La Hoya in East Los Angeles, California. He came from a family of boxers as his grandfather Vicente, father Joel Sr., and brother Joel Jr. were all in the sport.

Oscar studied at James A. Garfield High School and was brought up by a strictly religious Orthodox Christian family, making it one of his guiding principles in life. The first publicized relationship of De La Hoya was with Shanna Moakler, a Miss USA 1995 title holder, whom he got engaged with before the birth of their daughter, Atiana De La Hoya.

Unfortunately, things didn't turn out smoothly between the two, and their relationship ended in 2000. This wasn’t the end of Oscar’s romantic life though, as he soon after dated Millie Corretjer, a famous Puerto Rican singer he married on Oct. 5, 2001. The couple has two children, Oscar Gabriel and Nina Lauren.

Oscar holds an amateur career record of 234 wins, with 163 of it being knockouts, and six losses. One of Oscar’s first greatest achievements was when he won the National Golden Gloves title in the bantamweight class.

At the tender age of 17, De La Hoya showed to everyone that even a youngster like him could excel in the sport, as he won the U.S. National Championship in the featherweight division. It made him an instant sensation as he was regarded as the youngest American boxer at the Goodwill Games to win a gold medal.

However, the momentous victory was swiftly clouded with the news that his mother Cecilia was diagnosed with breast cancer and only had a few months to live. Cecilia died in Oct. 1990 and left Oscar with her last few words expressing her hope that his soon would further excel in the sport.

The young Oscar drew inspiration from her mother’s last words, and in the process, won the gold medal at the 1992 Barcelona Olympics. That was when he was nicknamed as The Golden Boy after it was publicized that his mother’s dying wish turned to reality.

Oscar De La Hoya had his professional debut on Nov. 23, 1992, where he won a first-round TKO victory against Lamar Williams. He then won his first-ever world boxing title at just 20-years-old. This was during a fight against Jimmy Bredahl where he claimed the WBO Super Featherweight belt.

He then got the WBO Lightweight title to himself on July 1994 after knocking out Jorge Paez at the second round. His next biggest victory was his fight against the Mexican Julio Cesar Chavez where he got the WBO Light-welterweight championship with a fourth-round TKO.

He then fought Pernell Whitaker after moving to the Welterweight division. His transition turned out perfectly as he defeated the American, thereby crowning himself as one of the best boxers in the world.

Despite the seeming smooth flow of De La Hoya’s professional career, he still was unable to stop the influence of time as his age caught up with him. He got his first loss from Felix Trinidad and another two more losses from Shane Mosley.
Since then, De La Hoya’s efficiency at the ring started to fade, losing one match after another. His fight against Manny Pacquiao in Dec. 6, 2008 sealed the deal from him as he decided to retire for good.

Achievements and Other Endeavors

De La Hoya ended his career with an impressive record of 39-6, 30 of which were knockout wins. Having won 10 world titles in six different weight categories proves that he’s a rare breed and worthy to be considered as one of the greatest boxers of all-time.

The Golden Boy defeated 17 world champions throughout his 16-year career, making him also the top earners in the sport. However, De La Hoya wasn’t just a boxer, because much to everyone’s surprise, he’s also a professional singer!

In fact, his first album titled "Oscar" was released in 2000. It even made it to the No. 1 spot on Latin charts. The Grammys also nominated his single entitled “Ven a Mi." In 2000, Oscar released another album titled "Oscar De La Hoya." It was backed by EMI International and was written by the Bee Gees and Diane Warren.
He founded Golden Boy Promotions in 2000 and up until now runs the company as the Chairman and CEO.

With all the achievements he made, it isn’t hard to say that Oscar De La Hoya is indeed one rich man. Well, that’s the reality as his net worth is currently estimated to be around $200 million, making him one of the highest paid boxers of all-time.

One good example of how much money he made was when he got $40 million after just fighting for 36 minutes inside the boxing ring. That equates to earning $1.1 million every minute. The Golden Boy has numerous million-dollar mansions in the U.S., one of the biggest is found in Bel-Air, Los Angeles.

Reports said that the property is worth $18.5 million. It’s filled with luxurious amenities like a swimming pool, sauna, and Jacuzzi, all while facing a picturesque view of the California skyline. He also owns a condominium in Pasadena, California that’s reported to be worth $2.65 million.

Most of his net worth comes from his boxing career and promotion. His ventures in the music industry and property dealings also contribute a huge portion to his total value.