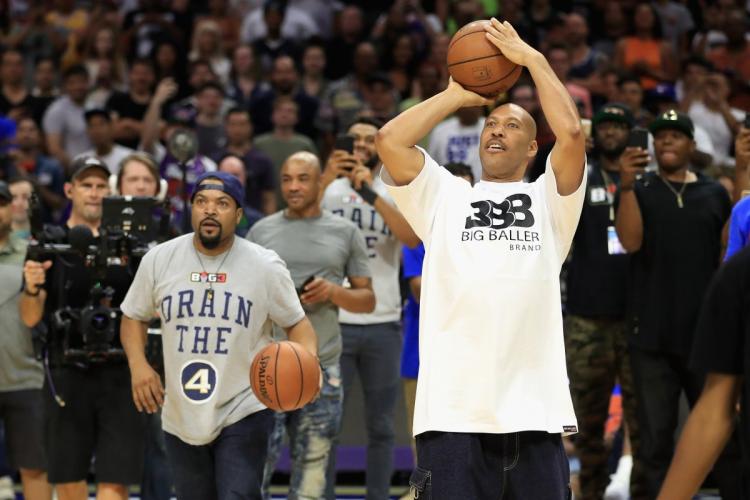 The Four-point shot is one of the unique features of the first professional three-on-three league in the world. Beyond the Big3’s three point line are three specially marked 30 foot spots on the Big3’s halfcourt. If a player makes a shot with at least a foot in one of the three marked circles, that shot is worth four points.

Last May, Ice Cube issued a challenged to Lavar Ball. The Big3 founder dared the Ball patriarch to make the four point shot. If Lavar could make the Big3’s 30-footer, the rapper-founder of the Big3 said he would buy 10 pairs of the Big Baller Brand’s controversial ZO2 Prime shoes.

The ZO2 Prime is the signature shoe of Lavar’s son Lonzo Ball, who was drafted 2nd overall in the 2017 NBA Draft by the Los Angeles Lakers. Manufactured by the Ball’s Big Baller Brand company, the shoe debuted at a ridiculous price of $495. Lonzo officially wore the shoe during the 2017 Summer League where he won MVP honors.

A week later, Lavar Ball accepted Cube’s challenge in a Twitter video. In the video, Lavar gamely talked trash to Ice Cube before upping the bet to 14 pairs of ZO2 Prime shoes, for every player in Lavar’s entire AAU team. The video ended with Lavar taking a jumper, not shown by the camera, which he pretended to have made but apparently bricked based on the clanging sound overheard while Lavar kept saying ‘still pretty’.

With no definite date however on when the challenge would take place, Ice Cube repeated his call out before the Big3’s week 8 event at the Staples Center last August 13, 2017.

With a date established in a venue not far from Chino Hills where the Balls hail from, Lavar obliged and the challenge was set for August 13.

Whether it was the 4-point challenge or otherwise, stars trooped the Staples Center to watch the Big3’s showcase. Chicago Bulls superstar Dwyane Wade sat courtside next to former NFL receiver Chad Ochocinco while artist Chris Brown and actor Jesse Williams were a few seats down. Snoop Dogg was there both to watch and perform at halftime.

When it was time to ball though, the challenge was a little different from what was originally discussed, perhaps because Lavar changed the original bet from 10 pairs of ZO2 Primes to 14. Instead of Lavar making just one 4-point basket, the duo had a 4-point shootout. The baller who made more four point baskets in ninety seconds was the winner. And it wasn’t Lavar.

Ice Cube beat Lavar with two makes to one, with Lavar shooting several airballs before hitting his lone basket. Cube was in his element, serious with the competition and made two big baskets. The best part of it was when Lavar acted like he made a shot when it was clear that it was Ice Cube’s basket which went in.

Lavar Ball infamously declared that he would beat Michael Jordan in a game of one-on-one during his prime:

“Back in my heyday, I would kill Michael Jordan one-on-one. I would just back (Jordan) in and lift him off the ground and call a foul every time he fouls me when I do a jump hook to the right or the left. He cannot stop me one-on-one. He better make every shot ’cause he can’t go around me. He’s not fast enough. And he can only make so many shots outside before I make every bucket under the rim.”

Unfortunately, Lavar couldn’t walk his talk. What did you expect? Lavar took only one three pointer during his 26 games at Washington State. Of course he missed that shot. Heck, Lavar made only 19 of 46 two point baskets and 18 out of 40 free throws in college. You couldn’t expect him to shoot from Curry range, not at all.

But while Lavar Ball couldn’t put his money where his mouth is, his mouth has likely put a lot of money on the Big Baller Brand. Not the shoes, at least not yet. But look where Lavar’s talking has taken Lonzo. He pitched for Lonzo to play in Los Angeles and his son is now projected as the next Magic Johnson. Now oddsmakers have his son ahead of Ben Simmons and Markelle Fultz as favorite for the Rookie of the Year award. Don’t be surprised if Lonzo wins that hardware on awards night.

Sure Lonzo’s got that otherworldly passing skills but Lavar’s out of this world talking has surely helped hype ( and sell ) his son. As for his own game though, that jumper sucks. Lavar is never going to beat Michael Jordan at any age. He can’t even beat Ice Cube.