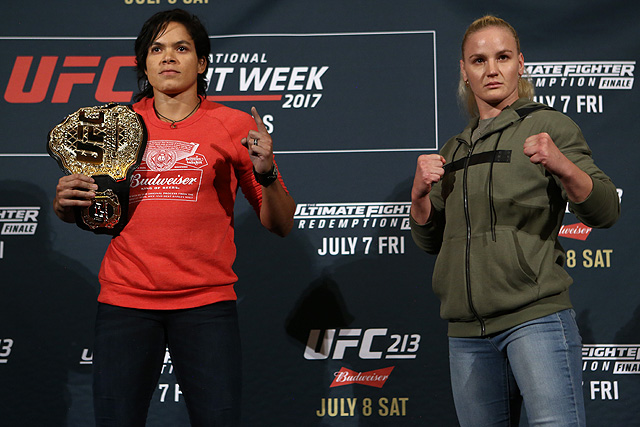 As Amanda Nunes prepares to defend her UFC women’s bantamweight title at UFC 215, the one issue that continues to pop up is her surprise withdrawal from UFC 213. And while Nunes maintains that she did not pull out from the fight because she was scared of her opponent ( of course she wouldn’t admit it ) , Valentina Shevchenko, a lot of people feel that way, especially since Nunes was cleared by the doctors to fight when he begged off.

During Thursday’s UFC 215 media conference call, Nunes made sure everyone knew she isn’t ducking anybody in her division. Via MMAFighting:

“And this is the thing, I don’t know if people think I was scared or something like that — no, I’m the one who wanted this fight. I’m the one asking for Sean Shelby to reschedule the fight right away. ... I never was going to run away. I’m a champion, I have to defend this belt. Whatever steps in the cage against me, I will fight, because I have the belt, I’m No. 1 on the planet, and I want to keep staying here. I have to keep proving it, and for that, I have to prove it against somebody. And Valentina is the one, the one that I wanted to fight next. Nobody else in this division.”

Has To Be Valentina 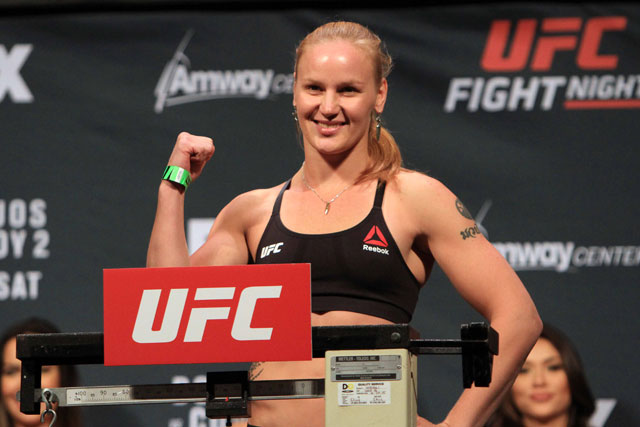 Amanda is correct, it has to be Valentina. Not only is Shevchenko the #1 contender in her weight class, Shevchenko was the ready opponent at UFC 213 who had to watch her opportunity to fight for a world title wait when Nunes inexplicably pulled out of the event after she had successfully made weight.

Shevchenko worked her butt off to prepare for her first ever UFC title shot, only to find out less than 24 hours before the big day that her opponent had herself removed from the bout because she ‘felt ill.’ The bout was supposed to headline UFC 213 in Australia but instead, UFC President Dana White had to scramble and make the co-main event between Robert Whitaker and Yoel Romero as the new main event. 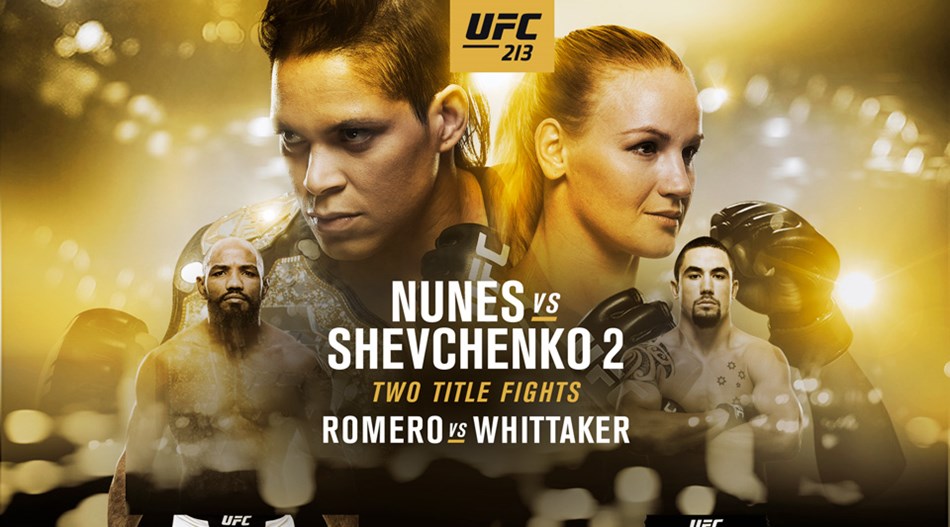 As a result, UFC 213 bombed at the PPV box office, netting just an estimated 125K-150K buys, one of the lowest in the UFC in nearly a decade. Part of the blame also goes to the loss of the T.J. Dillashaw and Cody Garbrandt bantamweight title bout. But Nunes’ sudden withdrawal also played a part in the flop.

After the incident, an understandably upset UFC President Dana White declared that Nunes will ‘never headline another UFC event’. Nunes was rightfully not paid for the bout while Shevchenko was paid a measly $70K for her troubles. Worse, Nunes was allowed to keep her title despite the controversial nature of her withdrawal from the title bout. 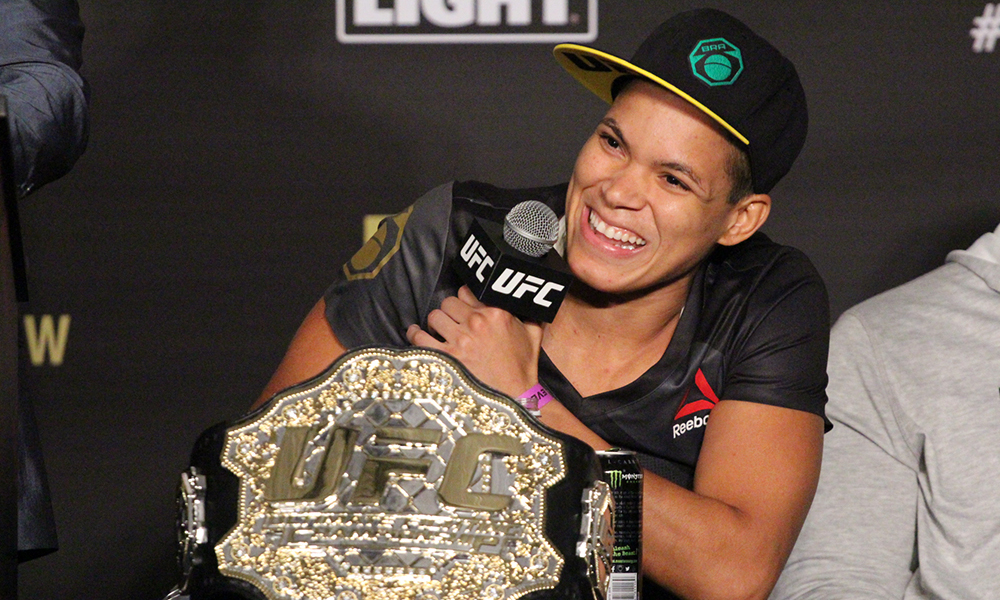 Many fans and experts wondered why Nunes was never stripped of her belt. After she made weight during the weigh-ins, she was suddenly hospitalized in the afternoon of Friday. However, the doctors later cleared her to fight. It was Nunes who declared that she didn’t ‘feel good’ and wasn’t ready to fight.

At that time, White could only say ‘you can’t force her to fight’ but the UFC President also told reporters that time that Nunes’ illness was 90% mental and only 10% physical. Did White believe that Nunes wasn’t really ill? Or White allude that Nunes’ was scared of Shevchenko, just like many of the Lioness’ critics were saying? Dana Never answered that question but likewise, he allowed Nunes to keep her title. And that’s why we have a fight at UFC 215. 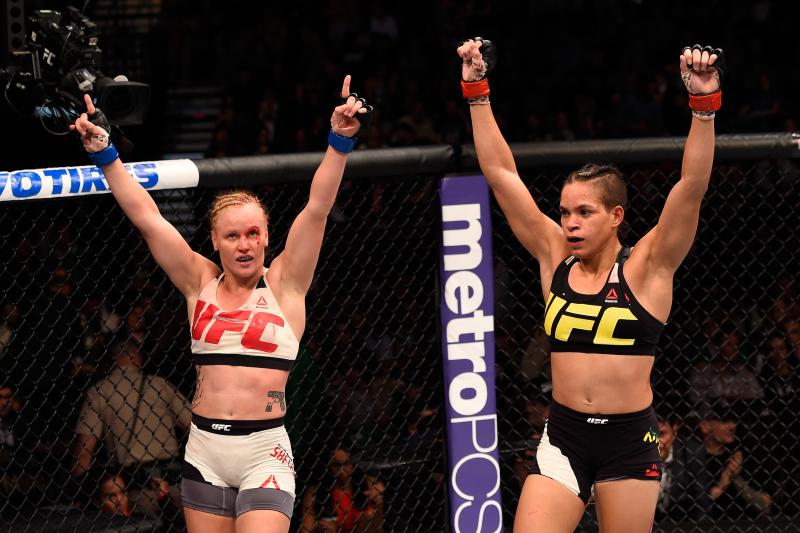 Whether it’s true or not, Does Amanda Nunes have a reason to be afraid of Valentina Shevchenko? Well Shevchenko is perhaps the most decorated striker in the UFC, being a multiple time Kickboxing and Muay Thai world champion in the past. Shevchenko is on an impressive two fight winning streak, defeating top contenders Holly Holm and Juliana Pena in succession.

Prior to her twin wins though, Shevchenko ran into a then rising Amanda Nunes. The two fought in a back and forth war which Nunes won by unanimous decision. However, the current women’s bantamweight queen faded in the latter stages of the fight, forcing her in a survival mode against a surging Shevchenko. 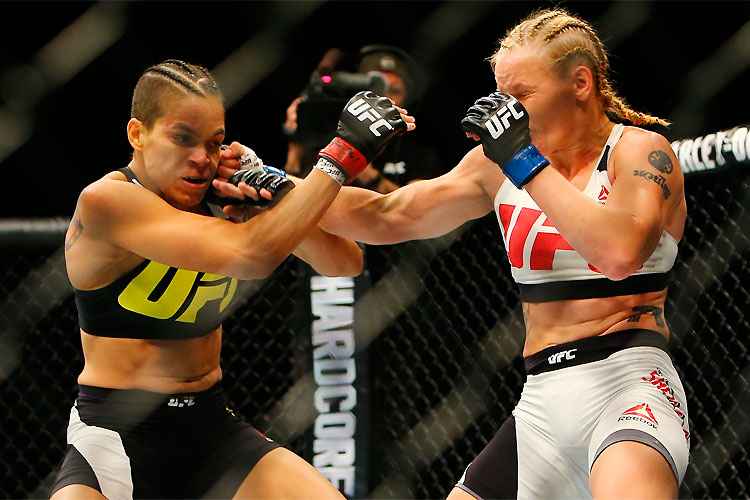 Valentina started the fight a little tentative, and that allowed Nunes to dominate the first two rounds of the fight. But by the third round, Nunes’ suspect cardio betrayed her. And once Shevchenko started to open up, it was a different fight. Sure, Nunes won, but many believed that had the fight been scheduled for five, the outcome would have been different.

Nunes displayed more power against Shevchenko but Valentina’s resilience was more startling. Her vast fighting experience showed when she never panicked. She countered Nunes better than any other fighter had ever done before. Shevchenko showed a wide array of striking skills that had Nunes thinking more often than she does. In short, Shevchenko has the style and the skills to give Nunes a hell of a fight. 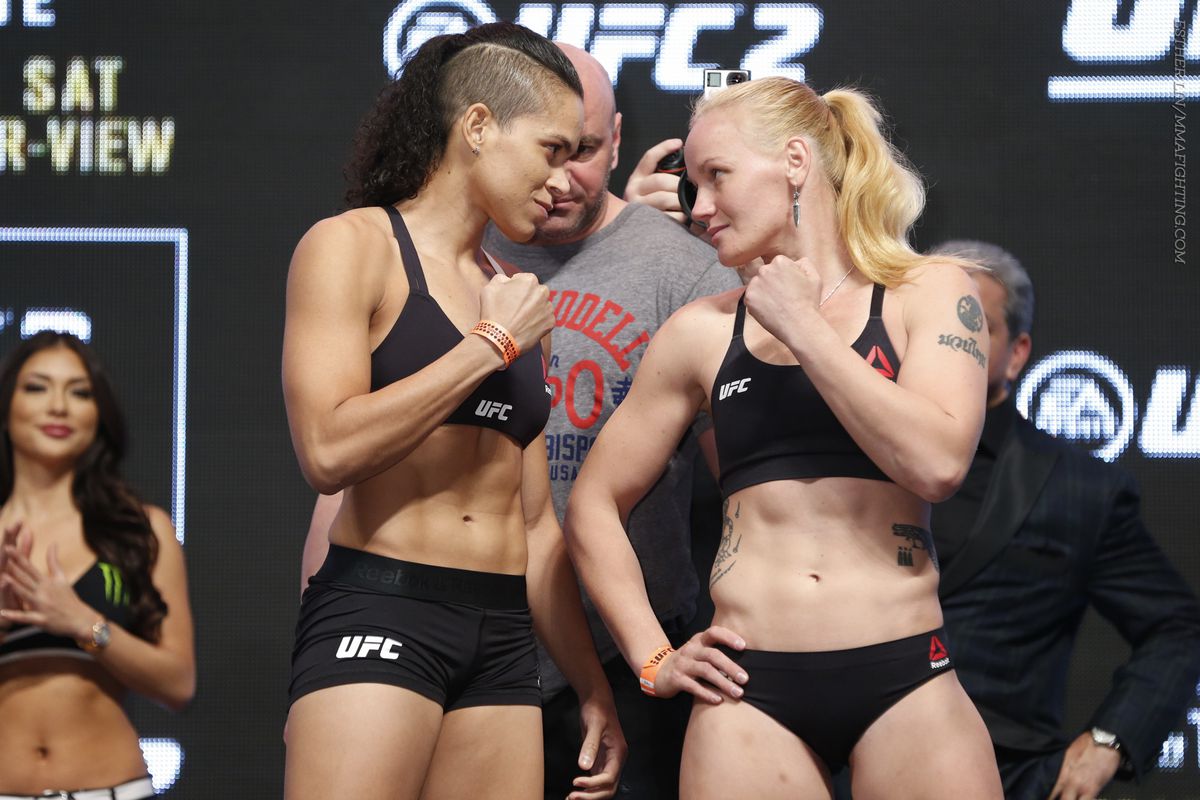 Nunes’ win over Shevchenko led to a title shot against then champion Miesha Tate at the iconic UFC 200 event in Las Vegas. Nunes went on to pound Tate and submit her in one round to win the gold. Nunes then successfully defended her UFC women’s bantamweight title by retiring former champion Ronda Rousey. Nunes’ dominance over two of the UFC’s top bantamweights made her the new woman to beat. However, she will not be the baddest woman in the planet unless she beats Shevchenko at UFC 215.

With a week to go before the fight, Nunes looks more confident than ever. but no matter what happens at UFC 215, critics will continue to ask what if the two fought at UFC 213? What will be her mental state going to UFC 215? Valentina is a pro and has been one for a long time. She is more than ready to face Amanda Nunes at UFC 215. But what if UFC 213 was her best chance at beating Nunes because she had the mental edge back then?
Amanda Nunes dodged a ‘bullet’ at UFC 213. She’s lucky she still has the belt heading to UFC 215.