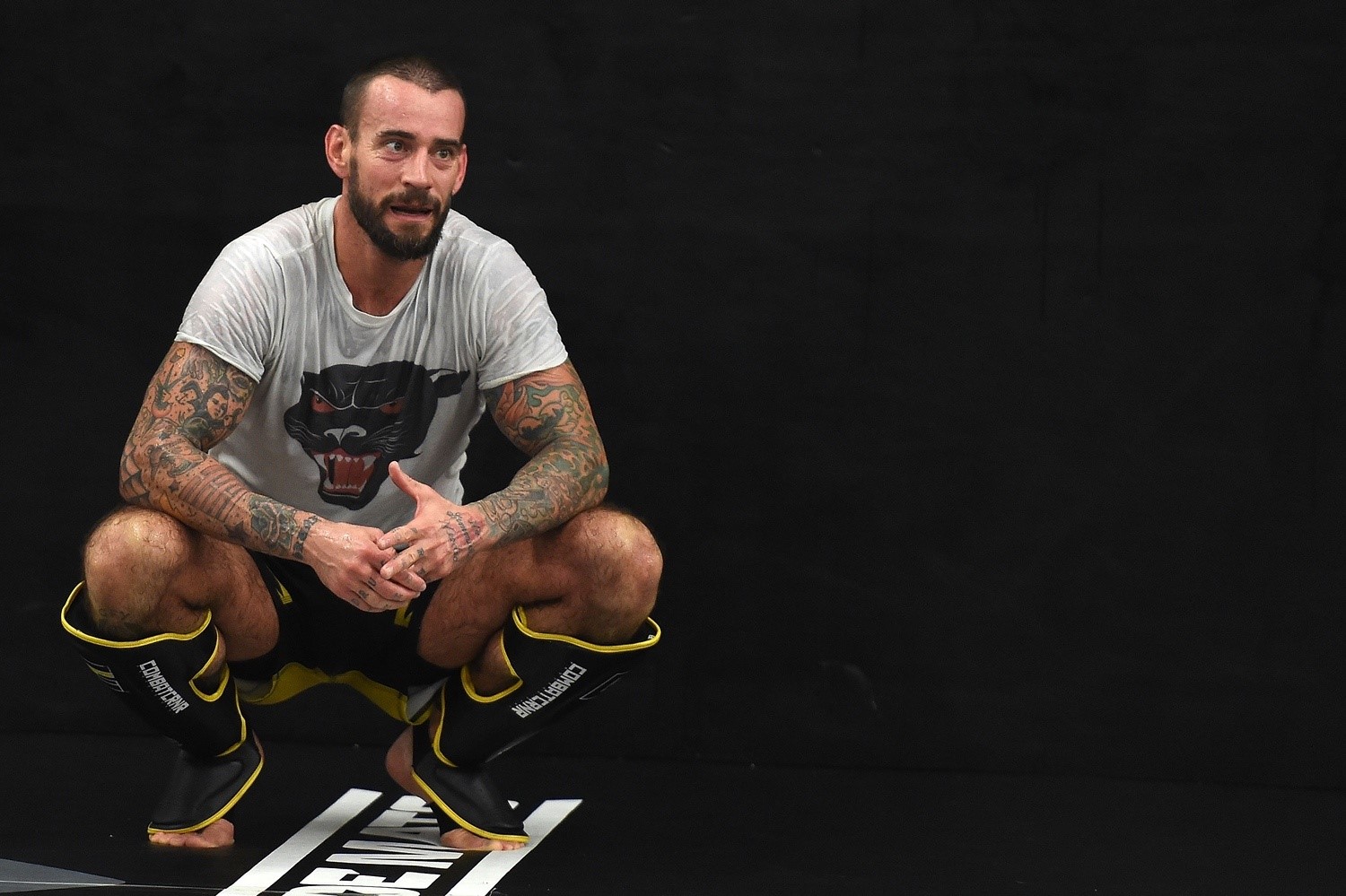 Is CM Punk Fighting In The UFC Again?

It’s been more than a year since CM Punk’s disastrous UFC debut and it appears like the former WWE superstar is ready to fight again.

Punk, whose real name is Phil Brooks, is back in camp, apparently training for his next bout, wherever that may be. In an Instagram post by famed MMA trainer Duke Roufus of Roufusport MMA Academy, Punk is seen breaking a sweat, with boxing gloves, along with Roufus, clad in training gear, in the gym: 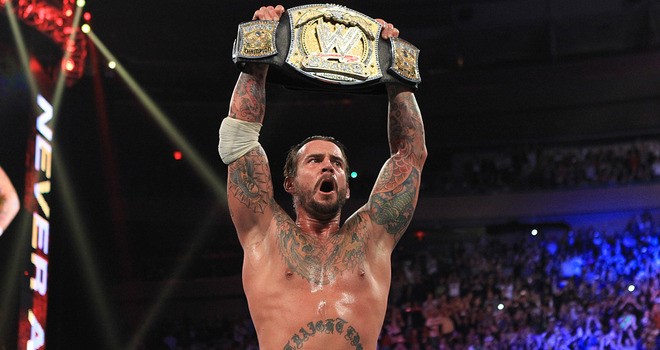 Phil Brooks is a legend in professional wrestling. He began his career fighting on independent circuits, most notably the Ring of Honor promotion until 2005 when he signed with the WWE group. Punk worked his way up the WWE ladder, toiling in its developmental OVW to the ECW until finally breaking ground in the mainstream organization in 2008.

Punk became the cult of personality in the WWE, where he became a two-time WWE champion. His reign of 434 days from November 20, 2011 to January 27, 2013 is considered as the sixth longest title reign of all-time in the WWE and the longest in its ‘modern era’. 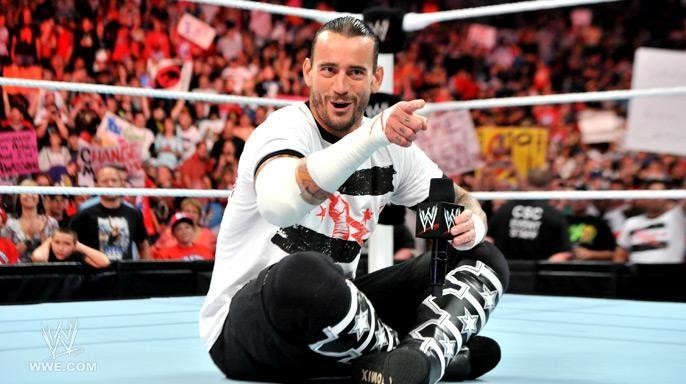 Punk portrayed an outspoken and sharp-tongued iconoclast throughout his professional wrestling career. His personal belief of the straight edge movement was the core of his wrestling persona. During his career, Punk also adopted an anti-establishment and anti-corporate attitude.

‘Cult of Personality’ by Living Colour was CM Punk’s longtime ring entrance music dating back to his Ring of Honor days. By the time he reached the peak of his powers in the WWE, he became the real life embodiment of the song. CM Punk became a cult figure, idolized by millions of WWE fans. A disagreement with the WWE forced him to leave in 2014. But what he did next was more stunning than leaving the WWE in his prime. 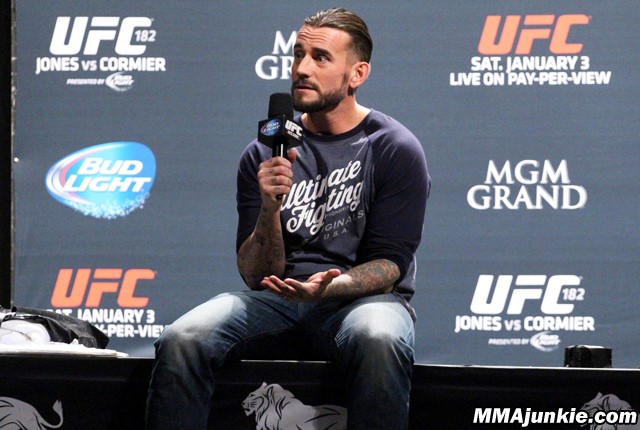 At UFC 181, CM Punk announced that he had signed a multi fight deal with the UFC. The signing was greeted with both excitement and skepticism. For sure, Punk’s star power would draw millions of his followers to the UFC. We already saw a similarly huge WWE star in Brock Lesnar make the successful crossover to real life fighting.

But while it came as a surprise that Lesnar won the UFC Heavyweight title in such a short period of time, the Beast was a former NCAA Division I collegiate wrestling champion. On the other hand, CM Punk had no background in wrestling or martial arts. In fact, he didn’t have any fighting experience at any level of competition. 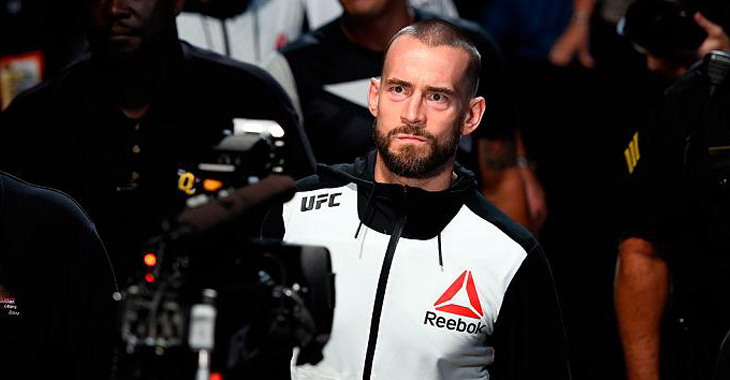 Still, Punk was a gamble the UFC was willing to take. In November 2013, Georges St. Pierre decided to take a leave of absence from the octagon after a controversial win over Johny Hendricks. A month later, Chris Weidman dealt Anderson Silva his second consecutive loss, literally breaking the Spider’s leg in the process at UFC 168. Without its top two draws, the UFC needed a boost.

2014 was a tough year for the UFC, PPV-wise. Only one event topped the 500K buys mark and that was UFC 175. Six events topped the 200K mark but failed to reach 400K buys. Worse, five other events failed to make it to the 200K PPV level, making 2014 one of the worst in the history of the UFC. CM Punk’s signing, no matter what critics said, drew a lot of attention back to the UFC. 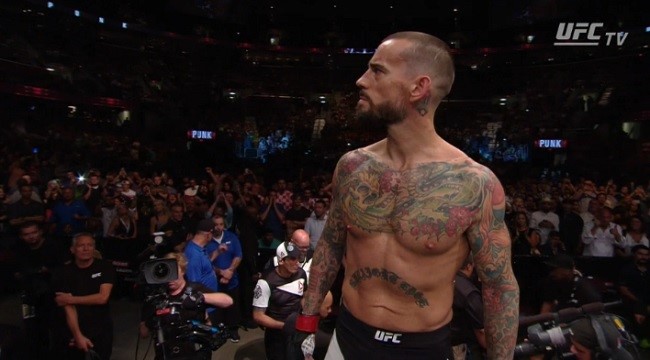 News of CM Punk’s signing almost broke down Twitter. However, Punk never fought in 2015 as promised. Instead, it was an Irishman named Conor McGregor who burst into superstardom with his flamboyant personality and powerful left hand. Then there was Ronda Rousey, who singlehandedly out women’s MMA in the map of fight sports.

Still, the fans clamored for CM Punk, wondering when he would finally fight inside the UFC octagon. And then it was announced, CM Punk would make his much awaited UFC debut at UFC 203 against fellow newcomer Mickey Gall. The bout ended quickly and rather disastrously for Punk who landed just 6 of 8 total strikes, none of them significant, while being helplessly submitted by Gall in less than one round. 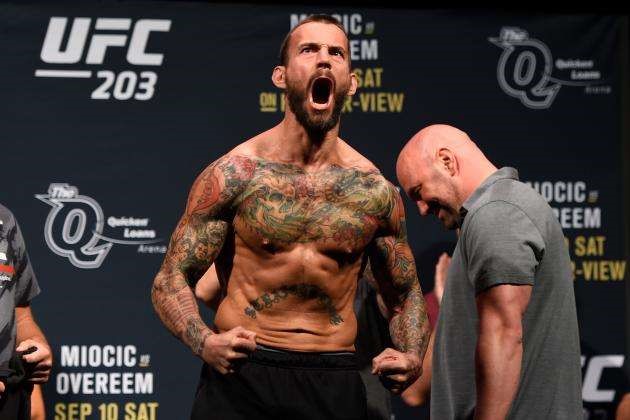 After the fight, UFC President Dana White was quick to say that CM Punk would not fight in the UFC again, at least not in his next fight after the 37 year old was totally outclassed by a young prospect. But even with White’s declaration, there was no doubt that Punk brought business to the UFC.

UFC 203 wasn’t really a PPV hit, making only around 475K buys. But that figure was the highest since 2013 for an event without Conor McGregor or Ronda Rousey. UFC 203 was headlined by Stipe Miocic vs Alistair Overeem, and given that Miocic’s previous PPV event ( UFC 198 ) got only an estimated 225K buys, Punk theoretically added twice as much to the event. Given that Punk was paid just $500K for getting beat up by Gall, he was a bargain for the UFC. 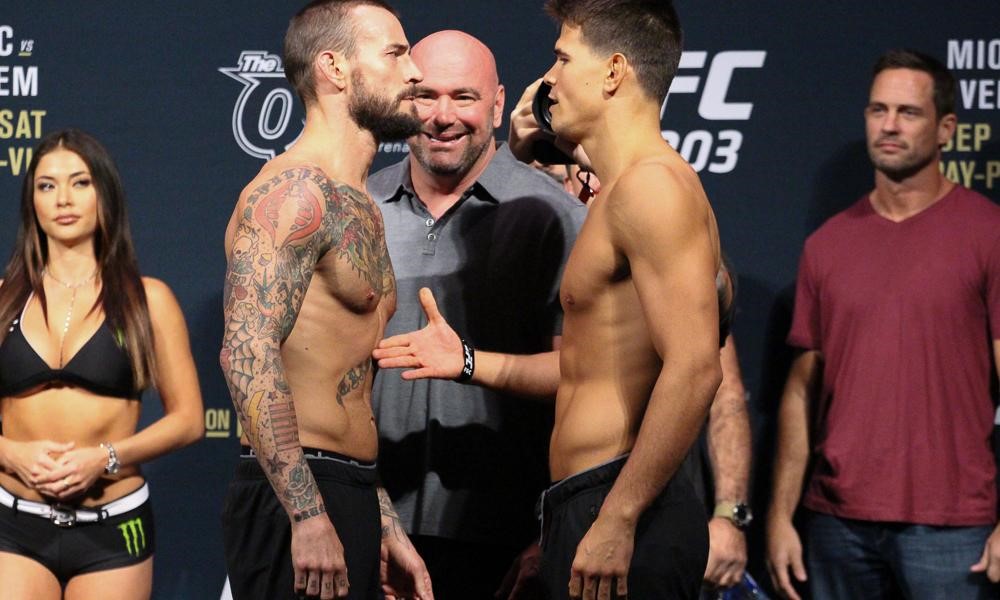 In December 2016, Dana White appeared to soften his stance on CM Punk by telling reporters ‘we’ll see what happens’ when asked about the former WWE champion. This April, White told reporters again that there ‘were no update’ on CM Punk’s future in the UFC. Despite the lack of answers, his change of tone on Punk’s future was obvious.

The UFC is in a similar situation as it was in 2013. Conor McGregor is in hiatus after his rich money fight with Floyd Mayweather Jr. Ronda Rousey is happily married and virtually retired. Jon Jones is probably starting at a long suspension. Sure, there are many up and coming stars, but there is no superstar with drawing power. 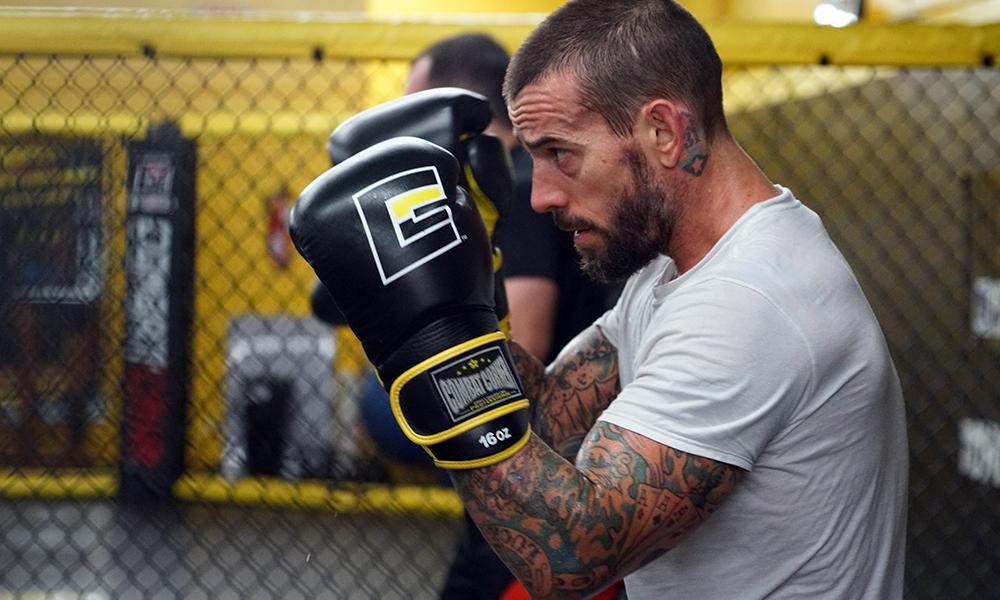 White hs brought back Georges St. Pierre to keep the boat afloat while McGregor is away. The Canadian superstar is booked to fight Michael Bisping at UFC 217. But after a long layoff, it remains to be seen if GSP can still compete, especially at a higher weight class. If he wins, White will hit the jackpot, if he doesn’t it will be back to square one.

McGregor is the logical choice to bring the numbers back. But the Irishman’s desire to fight again inside the octagon is uncertain. Here is CM Punk, all 38 years of him, wanting another shot at the UFC. He is no Conor McGregor, but outside the Notorious One, he may have the most drawing power. 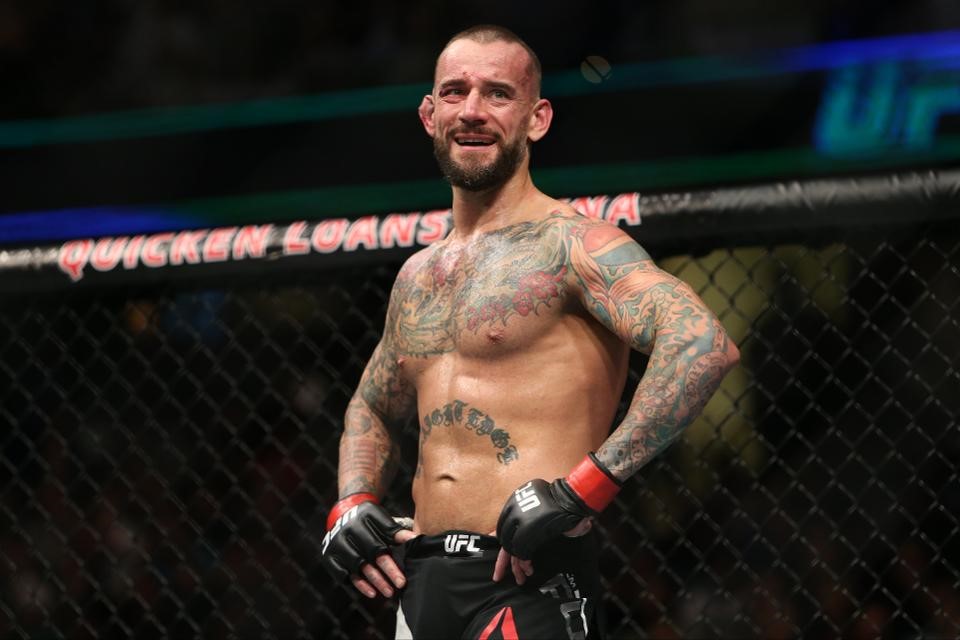 Traditional logic tells us that Dana White should send CM Punk to fight outside the UFC and face opponents who have the same level of experience with him. After all, Punk’s UFC 203 performance was nowhere near UFC level. But then that may not be the only point of consideration.

Much as MMA is a sport, it is also a business. The new owners at WME-IMG forked out $4B to buy the UFC in 2016. An investment that huge is presumably to make the most money, not just make the best available fights. In that line, CM Punk fighting again makes sense, no matter what the hardcores will say. That’s a dilemma for Dana White.