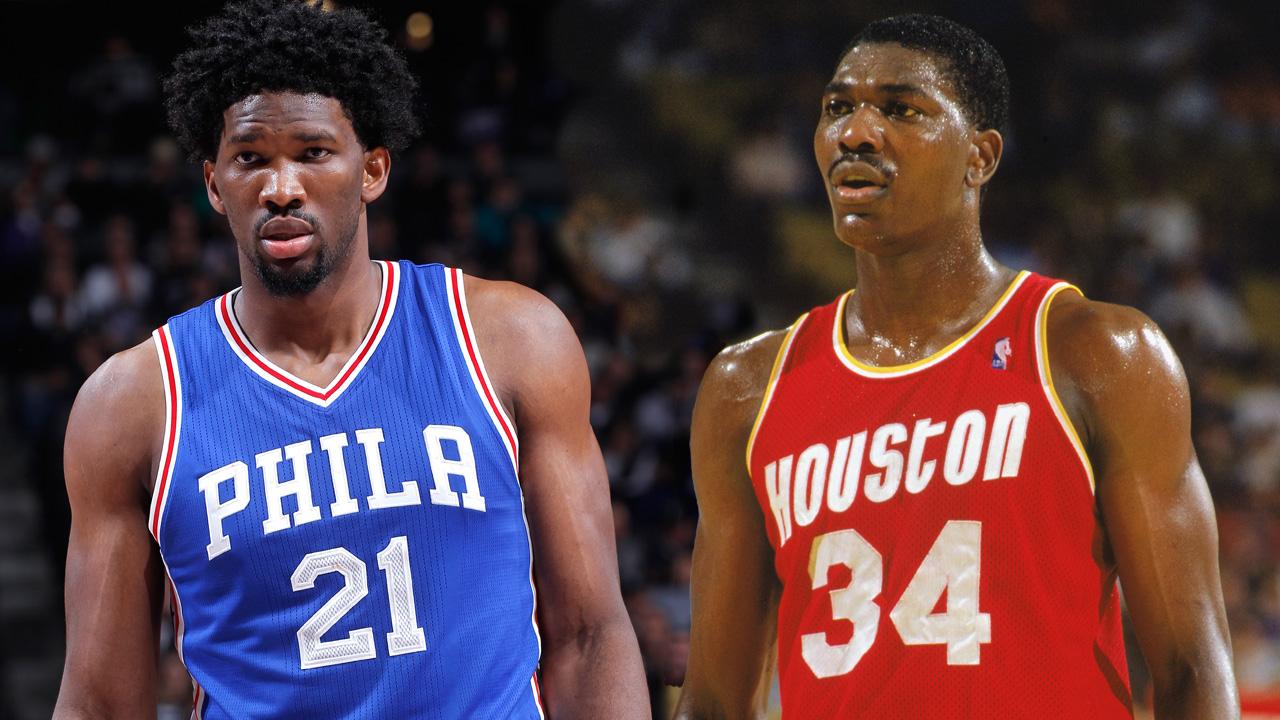 He may have arrived two seasons late, but he is making up for lost time.

Twenty one games into his second NBA season, Joel Embiid is making waves. Not only are the Sixers starting to win, Embiid is easily proving why the Sixers gambled on him with the 3rd overall pick of the 2014 NBA Draft. 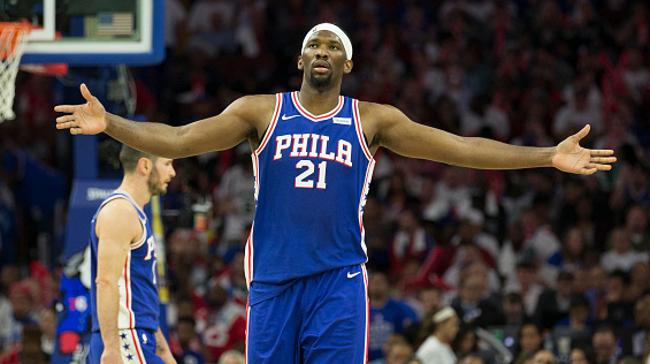 But it’s not just Joel Embiid’s numbers that are drawing comparisons to the two-time NBA Finals MVP, it’s Embiid’s moves that are catching the public eye. With plays like these, it’s hard to differentiate between Joel Embiid and the great Hakeem Olajuwon:

Joel Embiid looks a lot like Hakeem Olajuwon in this @CocaCola #SCMustSee. pic.twitter.com/eCYhEEsmjt

JOEL EMBIID OLAJUWON with the bucket and the shimmy pic.twitter.com/Tw8cMztZmf

No doubt, Joel Embiid has the moves of the Dream. And it’s not just the Dream Shake that is eerily similar. Embiid’s footwork, soft touch around the basket and perhaps almost his entire post arsenal are very much Hakeem-like. So while his offensive repertoire still needs improvement to equal Hakeem level, Joel Embiid is on his way there.

But the graceful moves aren’t what made Hakeem Olajuwon the dominant player that he was during his era. What separated Hakeem from the other great players was his defense. Olajuwon was perhaps the single most dominant defensive player the league has seen since Bill Russell. And that’s not an exaggeration. 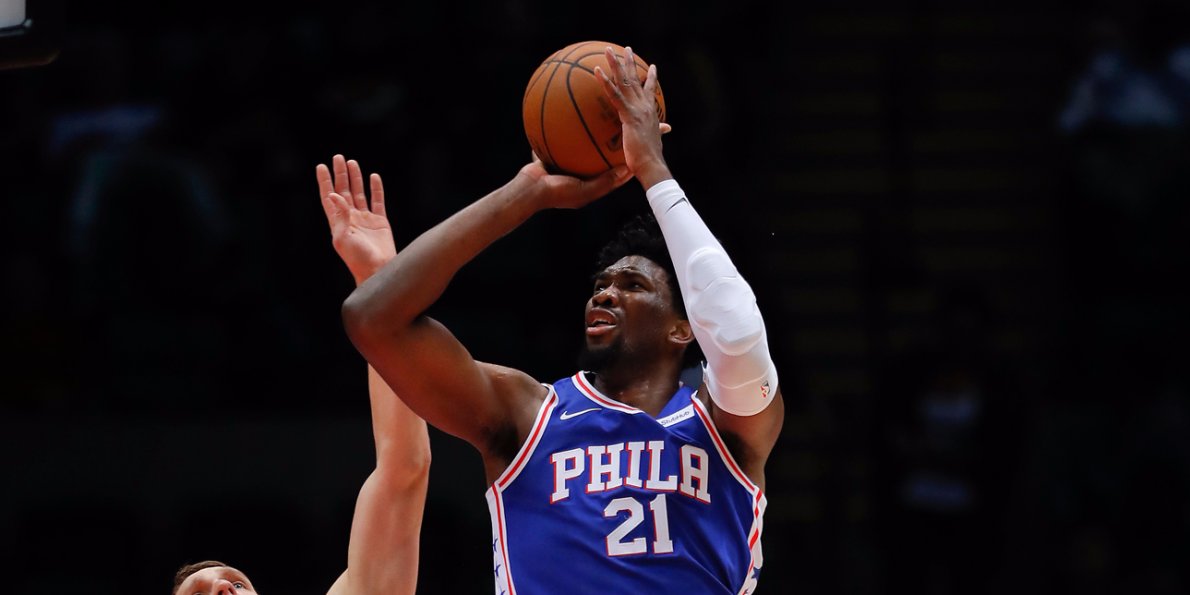 We all know that Olajuwon is the NBA’s all-time leader in blocks with 3,830 shots swatted during his entire NBA career. But not many of us know that Olajuwon averaged over 4.0 blocks per game during a six year stretch from 1989-1995 ( 1782 blocks in 442 games = 4.03 ). To appreciate that, allow us to tell you that the last time a player averaged 4 blocks per game was Dikembe Mutombo more than 20 years ago, in 1996.

Since the NBA began tracking stats, there have only been six seasons where a player has averaged 2 steals and 2 blocks per game. The latest to accomplish that feat were David Robinson in 1991-92 and Gerald Wallace in 2005-06. Before those two? Hakeem Olajuwon did it four times, in four consecutive seasons from 1987-1991.

And then there are his defensive accolades. The Dream won two Defensive Player of the Year awards. He was named to the NBA’s All-Defensive first team five times, the All-Defensive second team four times. He led the NBA in blocks during two seasons. He also paced the league in rebounds twice.

It wasn’t just all individual achievements. With Olajuwon as defensive anchor ( and without another elite defender on the team ), the Houston Rockets were a Top 10 defensive squad from 1989 to 1994. They led the NBA in defensive rating during the 1989-90 season and finished 2,10,3 and 2 during the succeeding seasons. 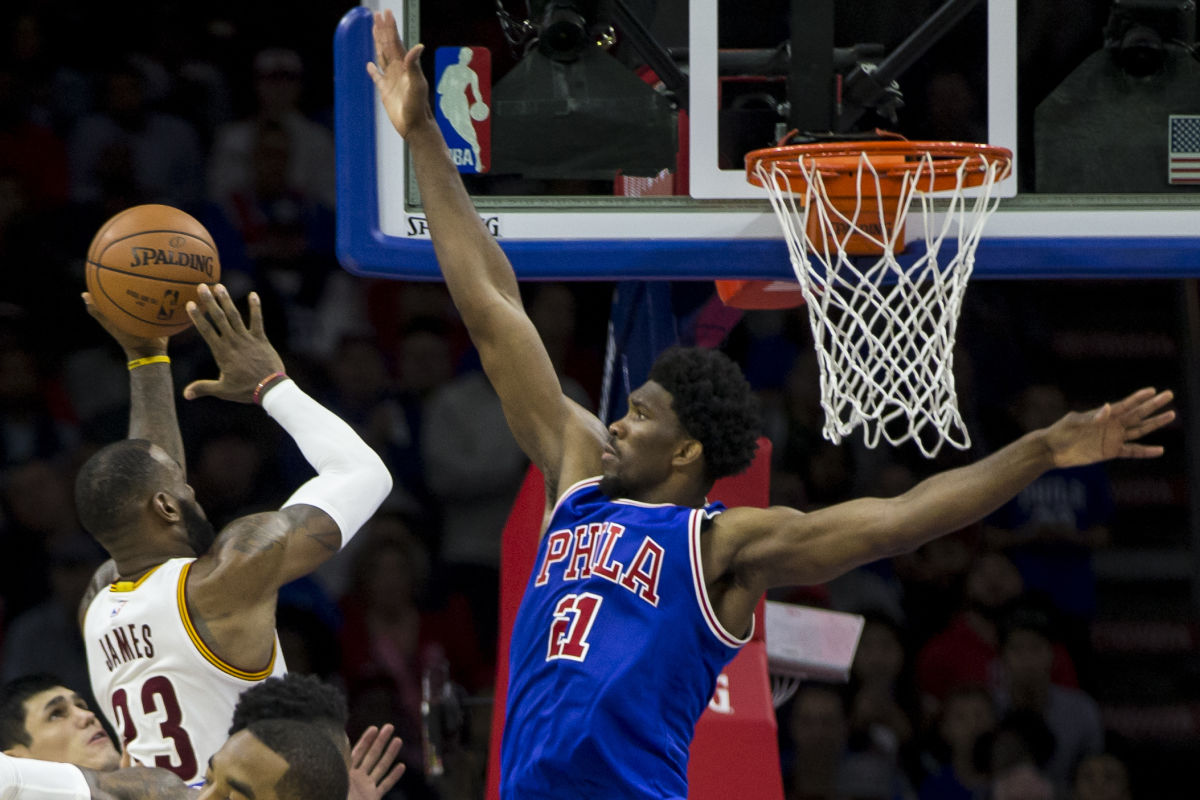 Olajuwon’s defensive prowess is what sets him apart from Embiid. We’re not saying that Joel Embiid isn’t a good defender because he is, despite the fact that he’s only playing in his second season.

Embiid leads the team in win shares per 48 minutes at .154 although he is just second to Ben Simmons in defensive win shares. He is also the team leader in rebounds and blocks.
Embiid’s Defensive Field Goal percentage allowed ( DFG% ) of 39.6% ranks second to Kevin Durant among players who defend at least 12 field goal attempts. 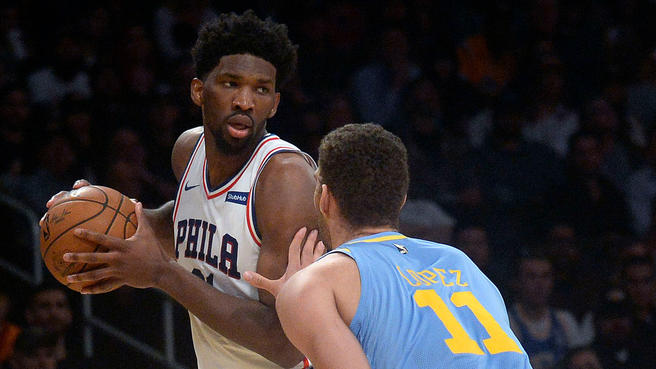 Joel Embiid is good. In fact, he’s very good and maybe will be one of the greats one day. Playing only in his second NBA season, Embiid is averaging 23.5 points, 11.1 rebounds, 3.2 assists and 2.0 blocks per game. In the history of the NBA, only Kareem Abdul Jabbar ( 6 times ), Shaquille O’Neal ( 4 times ), Tim Duncan ( 3 times ), David Robinson ( 2 times ) Hakeem Olajuwon ( 2 times ), Bob McAdoo, Bob Lanier, Patrick Ewing and Kevin Garnett have done so in a full season.

What makes Embiid’s season impressive is that he’s putting up his statline in just 30.2 minutes per game of playing time. That’s lesser playing minutes than any of the names mentioned above during their 23-11-3-2 season. The closest to Embiid’s minutes was Kareem Abdul Jabbar at 36.5 minutes per game during the 1977-78 season.

If you convert Embiid’s stats to Per 36 minutes, it’s going to be 27.9 points, 13.2 rebounds, 3.8 assists and 2 blocks per game. Again, those numbers are spectacular, considering in the history of the league, only two players have been able to record a statline of 27-13-3-2: Kareem Abdul Jabbar ( 3 times ) and Shaquille O’Neal ( 1 time ).

That would be great company, but that may not be happening soon. Embiid missed his first two seasons with various foot problems. He finally played last season but appeared in just 31 games before suffering a meniscus tear which ended his rookie year abruptly. This year, Embiid has played in only 21 of 26 games. 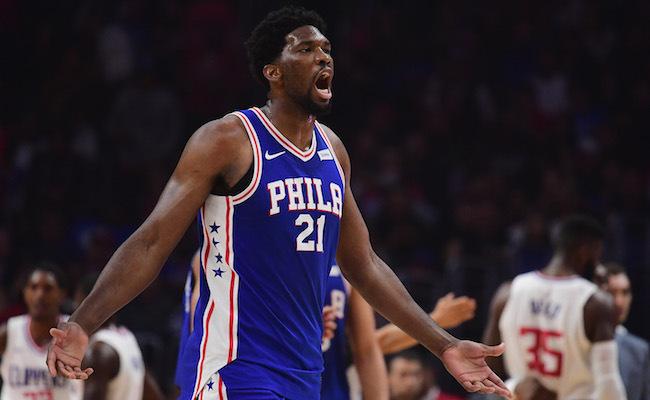 But as his nickname says, he is the Process. And while Sixers fans feel they are already reaping the rewards of Sam Hinkie’s ‘process’, Joel Embiid is still a work in progress. Offensively, he’s already showing a vast arsenal, with the ability to the three pointer on a consistent basis.

On the offensive end, the Olajuwon comparison is valid. But like a coin, the basketball court has two sides- Offense and Defense. Each is equally important as the other, although some would say that offense wins games, defense wins titles. Hakeem Olajuwon won back to back NBA titles with his otherworldly defense. Joel Embiid is only starting to win games for the Sixers.

Make no mistake, it’s hard not to love Joel Embiid. Not only is he a dominant force on the basketball court, he is also is a fun and colorful personality outside it. Joel Embiid is one of the more popular stars in the NBA today. With his potential, he can possibly be great like Hakeem Olajuwon - that is if he stays healthy and plays enough minutes to help the Sixers win. For now, the Olajuwon comparisons are like Hakeem’s monicker: A dream.