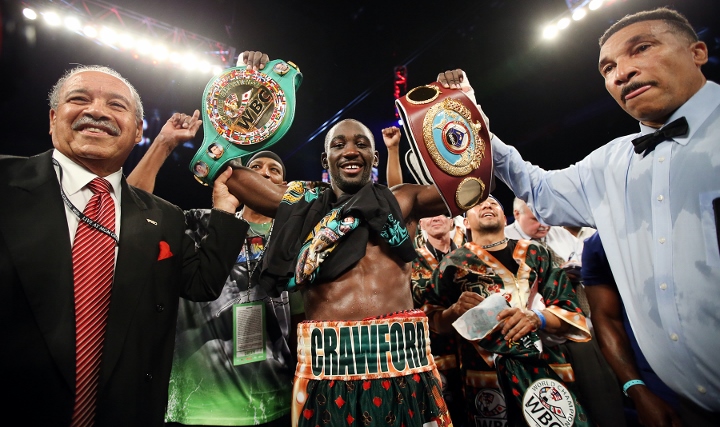 Is Terence Crawford Now The Best P4P Fighter In The Planet?

Unifying boxing's major belts has never been an easy task. Since the WBO came to exist in the late 1980's, only one fighter has unified the WBO title with the three other major belts ( WBC, IBF and WBA ) and only two fighters have held all four belts at one time.

Bernard Hopkins unified the four major belts by knocking out Oscar De La Hoya in 2005. Since then, the only fighter to simultaneously hold the WBC, WBA, IBF and WBO titles of a specific weight class was Jermain Taylor. Taylor accomplished the feat by beating Hopkins two fights after B-Hop made history, becoming boxing's last undisputed champion-until now. Terence Crawford now joins the list.

Bud has gone from two division title to undisputed champion in four fights. Two bouts after winning the vacant WBO light welterweight title, Crawford annexed the WBC belt by dethroning Viktor Postol. The win over the Iceman also netted Crawford the vacant Ring and Lineal light welterweight titled. Bud then retained belts with back to back stoppage victories over John Molina Jr. and Felix Diaz then set up the fight with the unknown Indongo. 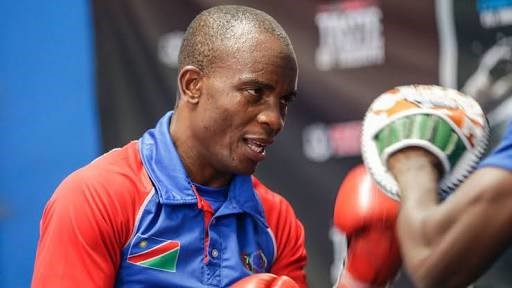 While Julius Indongo was relatively an unknown outside his native Namibia, his title conquests looked impressive. Turning pro after representing his country in the 2008 Olympics, Indongo fought exclusively in Namibia. Unbeaten in 20 fights, he travelled to Moscow, Russia to challenge Eduard Troyanovsky for the IBF and IBO light welterweight titles. Despite being the underdog, he knocked out the champion in just forty seconds to become only Namibia's fourth ever boxing world champion.

Instead of resting on his laurels, Indongo then travelled all the way to Glasgow, Scotland to unify with WBA ( unified ) champion Ricky Burns. Despite fighting on hostile territory for the second straight title fight, Indongo defied the odds and took Burns' title back to Namibia with a 120-108, 118-110 and 116-112 unanimous decision victory.

Once again, instead of basking in glory, Indongo sought to fight another champion in a foreign land. This time the stakes were much bigger-four more belts including the other two major alphabet straps. This time it was for the title of the world's undisputed light welterweight champion. And this time it was against boxing's next biggest superstar.

Terence Crawford's journey to boxing superstardom almost ended before it even began. In 2008, Crawford was shot inside his car while counting his winnings from a neighborhood dice game. The bullet hit Crawford's head, just behind his right ear. Thankfully, it missed anything serious. But it was his wake up call to stay away from the street life and focus his life on boxing.

Two fights later, Crawford was back fighting in the ring. Finally, he caught a break in 2013 when he was asked to step in on short notice to fight the dangerous Columbian knockout artists Breidis Prescott. Prescott is famous for being the first man to unlock Amir Khan's glass jaw. Crawford won by unanimous decision. It was his first ten round fight and his first ever foray in boxing's 140 pound division.

Bud Crawford's first world title came two fight later when he traveled to Glasgow, Scotland to beat Ricky Burns and capture the WBO lightweight title. One fight later, Terence Crawford arrived on the international scene with a star making performance in one of the sport's historic nights.

Although he hailed from Omaha, Nebraska, Terence Crawford never fought in his hometown as a professional boxer. More interesting than that, Omaha had hosted only one boxing world title bout in its history and that was in 1972 when then heavyweight champion Joe Frazier took on local boy Ron Stander. Smokin' Joe smoked Stander in four rounds and since then, Omaha has never seen a major boxing bout nor had a major boxing star.

Terence Crawford changed all that when he stopped the previously unbeaten Cuban Yuriorkis Gamboa in nine rounds, in front of a full house crowd at Omaha's Century Link Center. Crawford dazzled the crowd with his switch hitting skills and scored two knockdowns before putting Gamboa away. With the win, Crawford didn't just retain his WBO belt, he became boxing's newest star.

But now that he's cleaned up the 140 pound weight class and collected all the relevant junior welterweight belts, there may be no stopping Crawford's entry into the welterweight division. He's already 30 years old and once again, there are no more marquee names to fight in his current weight class. Welterweight may be inevitable.

Welterweight was once the division ruled by Floyd Mayweather Jr. and Manny Pacquiao. Now, Keith Thurman is the WBC and IBF titleholder. The WBO belt is in Australia with Jeff Horn while the WBA strap is with Errol Spence. Any of those names would translate to a rich payday. But none of those names would be easy picking. But does Bud have any other choice.

After the fight, Crawford was non-committal about the future. And who could blame him? He is currently the toast of the boxing world, it's first undisputed champion in a dozen years. More than the move to welterweight, Crawford's post fight talk was more focused on a non-monetary prize: boxing's pound for pound title.