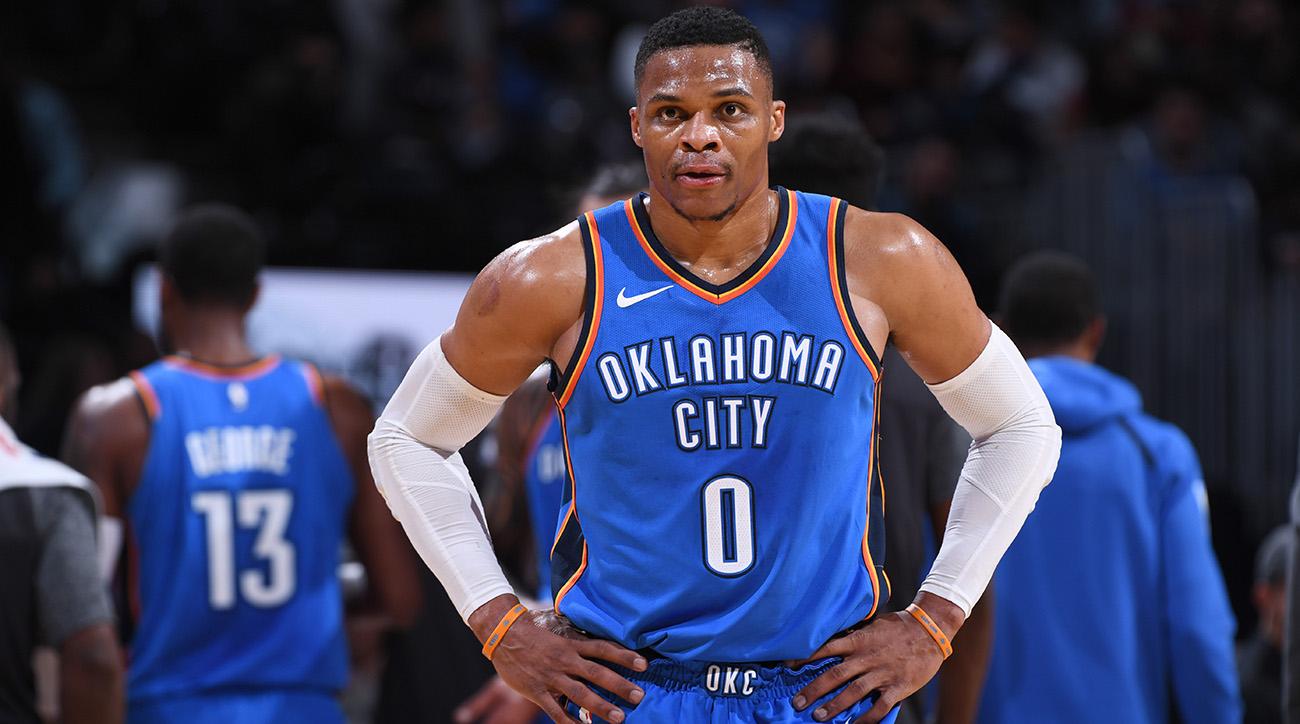 Is There A Need To Be Worried About Russell Westbrook’s Latest Knee Injury?

When you talk about Russell Westbrook, you talk about that fiery, feisty and ultra competitive guard who can literally carry his team for an entire season. That’s not a hyperbole because that’s exactly what happened to the Oklahoma City Thunder the season after Kevin Durant deserted them in favor of the Golden State Warriors.

Westbrook had one of the best individual seasons of all-time in 2017, broke Oscar Robertson’s long standing triple double record and won MVP honors at the same time. Although the Thunder didn’t go past the first round of the playoffs, Westbrook’s season was lauded as one of the most herculean efforts ever seen in league history.

Many view Westbrook as a machine or a cyborg who is indestructible and who just keeps on inflicting damage to the opposition day in and day out. So when you hear news that Westbrook is injured, that’s not ordinary because here’s a guy who loves to compete every day.

On Friday though, we got that “not ordinary” news. According to the Oklahoma City Thunder, Westbrook underwent arthroscopic surgery on his right knee last Wednesday. The procedure will force Westbrook to miss the preseason and presumably the early part of the 2018-19 regular season.

Westbrook will be evaluated in four weeks or around one week before OKC opens its 2018-19 campaign against the defending champions Golden State Warriors on October 16th. If Westbrook is cleared by doctors during the evaluation, he could be available to play against the Warriors (which is always an important game to him for obvious reasons). However, even if he is given the go signal by the medical team, there may be no rush on the part of the Thunder to bring him in that early.

According to reports coming from OKC, Westbrook felt some stiffness on his right knee while preparing for training camp last week. The 2017 NBA MVP opted to have a pre-emptive procedure rather than deal with it during the regular season.

Below is the full official statement released by the Oklahoma City Thunder:

The Thunder, Westbrook and his representation determined that after he experienced inflammation in his knee this past weekend that the best course of action was the proactive procedure, performed by Dr. Neal ElAttrache with Thunder medical personnel present at the Kerlan-Jobe Orthopaedic Clinic in Los Angeles.

The seven-time All-Star averaged a triple-double for a second straight season during the 2017-18 campaign, with 25.4 points, a league-leading 10.3 assists and 10.1 rebounds, making him the first player in NBA history to average a triple-double in multiple seasons.
Westbrook will be re-evaluated in approximately four weeks, at which time a further update will be provided.

As the statement says, the surgery was a proactive procedure. Still, the fact that Westbrook felt discomfort on the knee while training last week is a cause of concern for OKC fans. That’s because this is not the first time that Westbrook has had knee problems. In fact, he has a history of problems with that right knee.

Not The First Right Knee Injury 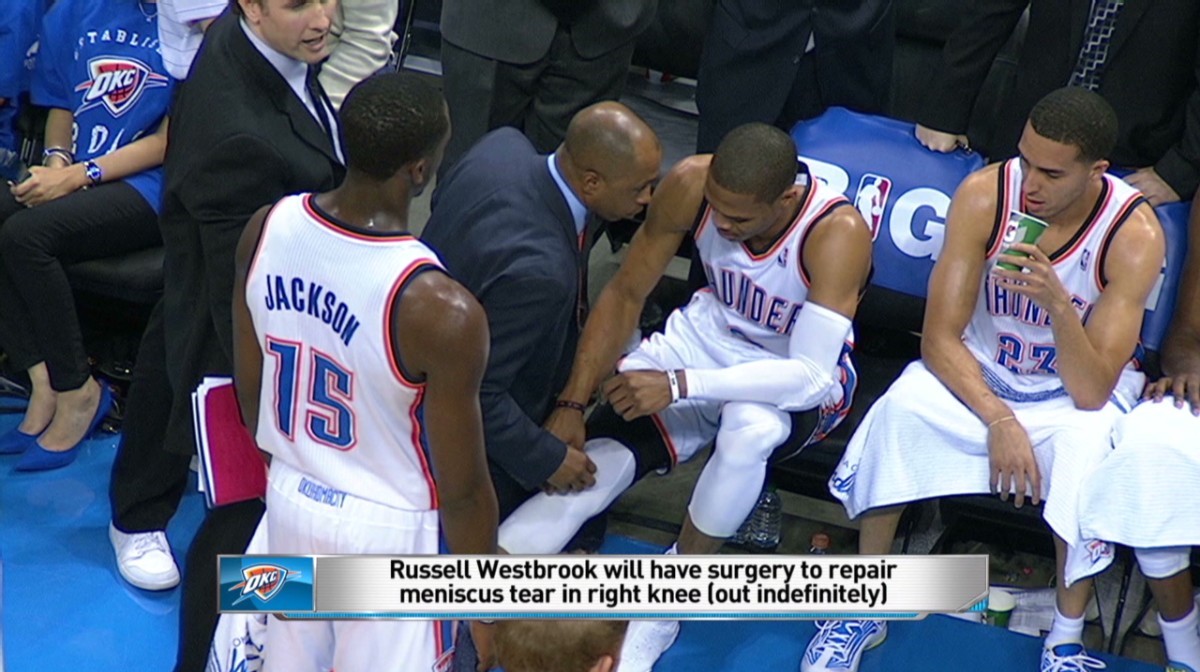 It can be recalled that during the 2013 NBA Playoffs, Westbrook collided with the then Houston Rockets’ guard Patrick Beverley as the latter lunged for a steal. Beverley’s hip collided with Westbrook’s knee. Westbrook slammed the scorer’s table with his right hand after the collision, as if he knew he had hurt something seriously. Westbrook remained in the game because he felt comfortable and the team though it was just a bone bruise. However, an MRI later revealed that he suffered a torn meniscus in his right knee. He was forced to undergo surgery that forced him to miss the remainder of the postseason and most of the summer.

In October 2013, the Thunder announced that Westbrook would undergo a second arthroscopic surgery on his right knee after a loose stitch in his knee caused it to swell. Because of the second procedure, Westbrook was expected to miss training camp, preseason as well as the first four to six weeks of the regular season.

But a determined Westbrook returned ahead of schedule, missing only five days of opening week. He returned to action on the Thunder’s third game of the regular season and worked his way back to form. But after registering a triple double during the Thunder’s Christmas Day victory against the New York Knicks, Russ had “experienced increase swelling”, the Thunder guard underwent a third arthroscopic knee surgery. Westbrook would miss the next 28 games but he would recover to return on February 20, 2014 and subsequently play in the postseason.

Then on September 22, 2017, Westbrook received a PRP injection on one of his knees. Now there were conflicting reports on this as the NBA’s global website said that it was on Russ’ left knee but ESPN reported that it was on Westbrook’s right knee. Regardless of which knee it was, Thunder General Manager Sam Presti said that it was nothing serious. A PRP is a “platelet rich plasma” injection involves drawing blood and spinning the blood down to create new blood which has higher plasma concentration. A high concentration of plasma allows muscles, ligaments and tendons to heal faster. Westbrook missed training camp but went on to play 80 out of the 82 regular season games.

A Cause For Concern? 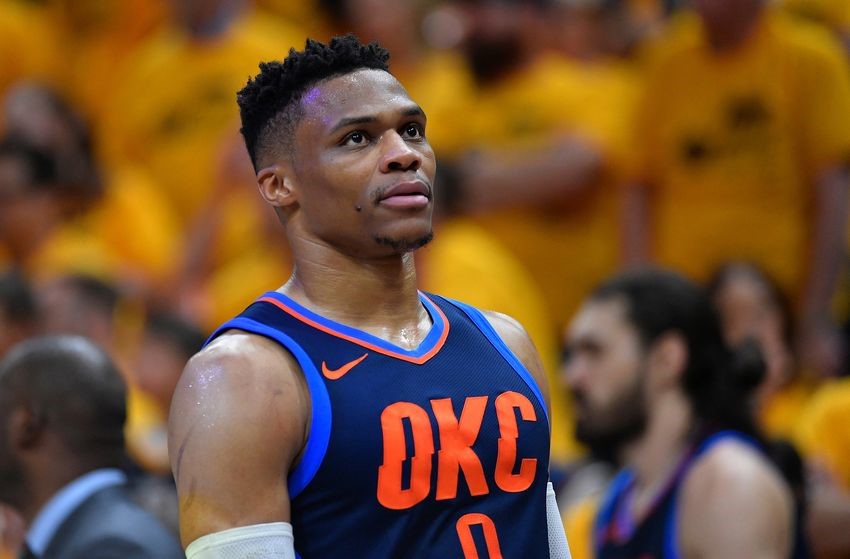 Anytime your franchise player undergoes a surgery, whether it’s minor or major and pre-emptive or not, you have got to be worries. When you have someone like Westbrook whose career average is 34.4 minutes of playing time per game and does what he does, there will always be some concern.

As his triple double average in the previous two season show, Westbrook is a guy who literally does everything for his team. Last season, Westbrook’s usage of 33.2 ranked higher than any other player who played at least 2600 minutes last season. That’s higher than the usage of players like LeBron James, Giannis Antetokounmpo and Anthony Davis. In fact , with the exception of James who led the league in minutes played for the second consecutive season, Westbrook is viewed as the player who carries the most individual load for his team.

Anytime something like this happens to a guy like Westbrook, we ask if his workload and style of play has finally caught up with his body. Look, the game of basketball is being played alongside science these days. NBA players get the best possible methods of conditioning and stuff like that with the evolution and application of science in sports. But at the end of the day, the body is only human. And when even machines like cars wear down with usage and mileage, what more for the human body?

An arthroscopic procedure means that there is only little incision as it’s only a scope that intrudes the human body. It’s not something like the doctors sliced a big part of Westbrook’s knee and sew it up with long stitches. But the mere fact that the procedure was done on a body part that had undergone surgeries ( not surgery ) in the past, that is something to be alarmed about.

It’s not about Westbrook missing a couple of games, a few weeks or even months this coming season. It’s about the possibility that the human body is telling its owner that it can’t take everything anymore. We know that Russell Westbrook is a fierce competitor and who loves to play the game of basketball in an intense manner. But Cyborgs only exist in movies and NBA superstars are only humans. Let’s hope that this is indeed nothing serious and that we are just over reacting to the latest news. But who can blame us, really? Knowing Westbrook’s injury and given how he plays the game, this was something we always wished would never happen.