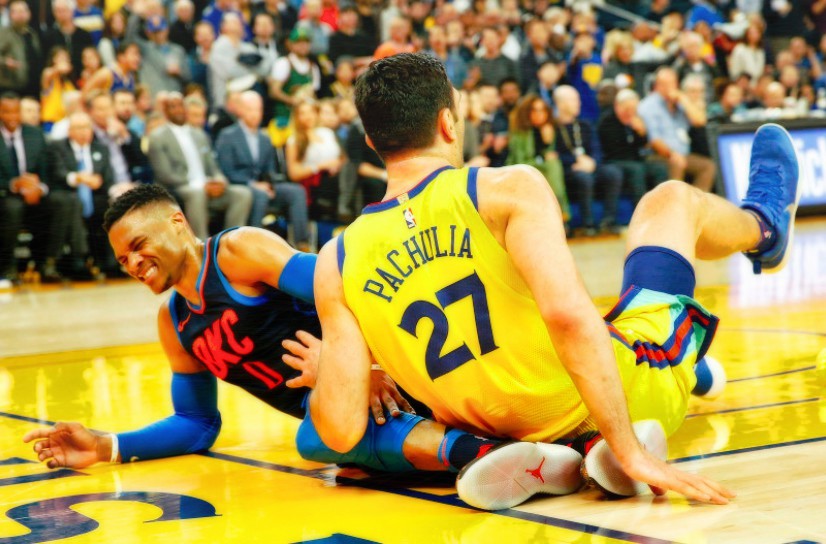 Is ZaZa Pachulia Clumsy or Dirty?

ZaZa Pachulia has a history of ‘dirty’ plays. Russell Westbrook has an injury history on his right knee. So when Pachulia fell on Westbrook’s knee for no apparent reason at all, a lot of people cried foul - including Westbrook himself.

"Obviously it was intentional," Westbrook said after the game. "Nobody touched him, he fell over my leg. He tried to hurt me. But hey, that's how it goes."

When asked further if he thought that Pachulia is a dirty player, Westbrook’s response was short and sweet: “for sure”.

Russell Westbrook on Zaza Pachulia falling on him, and asked if he’s a dirty player: “Yeah. For sure.” pic.twitter.com/w9ZH0AwVP1

Late in the third period of the Thunder’s 112-80 loss to the Golden State Warriors, Westbrook found himself in transition and threw a floater above Nick Young. The shot missed and as Westbrook tried to get the offensive rebounds, both he and Young fell to the floor by the baseline as Stephen Curry grabbed the ball. Then it happened.

ZaZa Pachulia, who had been trailing the play, found himself standing over both Westbrook and Young. Then for some suspicious reason, he fell to the floor and directly towards Westbrook’s knees. Warriors’ fans say he got hit by Nick Young’s flailing feet but that’s not conclusive in the video. Watch it here:

You be the judge.

If you think that was a dirty play, you are not alone. Other than Westbrook himself, a handful NBA stars think that the play was indeed intentional, and meant to hurt Westbrook.

“You know Zaza, you know his history, you know nobody pushed him,” Said George. “He aimed where he was going to fall. That’s Zaza making a Zaza play. He’s on the end of hurting a lot of guys.”

George has a good point. Falling down without any reason is one thing. Falling down on a particular spot isn’t coincidence. Not at all. Not if you are ZaZa Pachulia. Not with his history. Let’s talk about that in a while.

But if you think PG13’s opinion is biased towards his teammate, then you can’t say the same for Kyrie Irving of the Boston Celtics. Said Irving, via Instagram:

"The league has to take a look at this man, this s--t is ridiculous,"

Well Kyrie, S--t happens. But ZaZa’s s--t is indeed ridiculous. You can’t just fall over one guy after another. Again, that’s history and we’ll talk about that next.

Irving isn’t alone. Portland Trail Blazers All-Star guard Damian Lillard also didn’t like Pachulia’s actions. Said Dame, via Twitter: “ bs play smh”. We all know what he meant by ‘bs’ and it’s not big shot. Not at all.

The Kawhi Close Out

When we talk about ZaZa Pachulia’s history, we don’t have to look beyond last season’s Western Conference Finals. Remember that the San Antonio Spurs were up by twenty one points on the Golden State Warriors in Game 1 of that series? And then that infamous closeout happened.

After that play, the Warriors made a run, caught the Spurs and won Game 1. They would go on to win the series as the Spurs played minus Leonard. But not only did the Spurs lose the series. Leonard has never been the same since that injury. The former Finals MVP and two-time NBA Defensive Player of the Year has played just nine games this season and his future is in limbo.

Remember how livid Spurs Head Coach Gregg Popovich was after that incident:

"Ask David West, his current teammate, how things went when Zaza (Pachulia) was playing for Dallas, and he and David got into it," Popovich said. "And then about the history he's had and what that means to a team, what happened last night. Totally unnatural close out that the league has outlawed years ago, and pays great attention to it. And Kawhi's not there. And you want to know how we feel about it. You want to know how that lessens our chances or not. We're playing very possibly the best team in the league.

"We don't know what's going to happen in the East and 9.75 out of 10 people would figure the Warriors would beat the Spurs. Well we've had a pretty damn good season, we've played fairly well in the playoffs, I think we're getting better and we're up 23 points in the third quarter against Golden State and Kawhi goes down, like that. And you want to know if our chances our less, and you want to know how we feel? That's how we feel."

Once again, Pop talks about history. And he mentions David West, Pachulia’s current teammate in Golden State. This is Pachulia’s history with West and Leonard, back when he was still playing for the Dallas Mavericks:

This is Zaza Pachulia's history with Kawhi Leonard and David West that Gregg Popovich was talking about pic.twitter.com/HXhOqBJOSP

Nothing serious though with David West. But Kawhi Leonard? Damn, he tried to break Kawhi’s arm and/or shoulder the way Kelly Olynyk injured Kevin Love. Good thing nothing happened to Leonard that time. Bad thing, Leonard’s been hurt since that incident during last season’s playoffs.

As for David West, well we know he’s a savvy veteran and wouldn’t want to start friction inside their locker room. So his reaction to Popovich’s statements?

We don’t know if West still feels the same way after the latest incident involving Westbrook. But as for Westbrook’s former OKC teammate Kevin Durant ( who is now ZaZa’s teammate in Golden State ), the Slim Reaper says Pachulia is just a clumsy dude.

KD on the Zaza-Russ play: "I don't think Zaza is trying to hurt anybody. He is clumsy." pic.twitter.com/xVIzWtv2VD

Durant adds that he’s glad that Russ didn’t get hurt on the play. But he insisted that ZaZa is just clumsy. Nothing more, nothing less. But what do you expect? Like David West did before, Durant is merely trying to avoid internal conflict, especially at this point of the season.

But let’s leave the Warriors out of our conversation. Of course, they have their teammate’s back. After all, his ‘success’ will be a huge part of their team’s success. Make no mistake, the Warriors are the best team in the league today ( in the last four years for that matter ). They don’t need ZaZa’s BS plays. But whether they like it or not, they are the beneficiaries. Just remember how the fast the momentum of last year’s Western Conference Finals changed after ZaZa’s ‘innocent’ closeout on Kawhi Leonard. Didn’t the Dubs get an easier road to the Finals after that play? They sure did.

The issue here really isn’t whether Pachulia’s intention is to hurt the other player or not. The issue here is he keeps on getting involved in such suspicious plays. An accident that happens more than once isn’t an accidental. No matter how much we try to give him the benefit of the doubt, we can’t. ZaZa Pachulia cannot just fall on one player after another. We know he’s big, he’s lumbering and maybe he can’t control his fall sometimes. But why do these plays not happen to other big guys? We saw Dennis Rodman. He was tough, he was considered dirty. He got into fights. But was there a time when the Worm was involved in a similar incident? Perhaps there was one or two but none of us remember as vividly as we do ZaZa’s arm lock and close out of Kawhi Leonard.

It’s good to have someone like ZaZa Pachulia on your team. He’s an enforcer who brings toughness to your ball club. But he must remember that the bulls eye is on his back. Every innocent play like those will always be misconstrued as intentional. An honest mistake will always be considered as premeditated. He can’t just allow himself to be caught in similar situations, unless of course if it’s by design and on purpose. In ZaZa’s case though, it’s hard to call it an honest to goodness tough play because not only has it happened several times, it’s happened against the best player on the opposing squad. That’s obvious. That’s dirty, by any definition of the word.