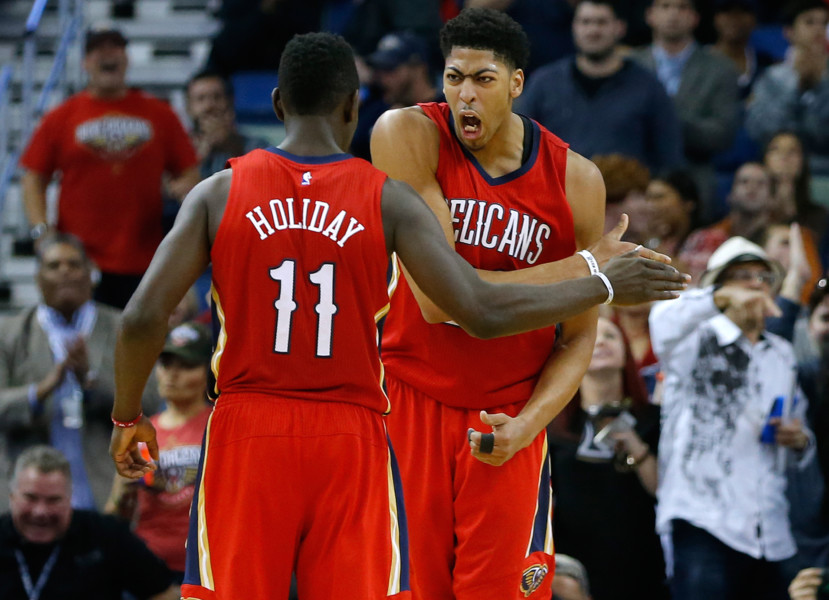 The New Orleans Pelicans continued their rise in the Western Conference standings with a 121-116 win over the stubborn Los Angeles Clippers on Tuesday night in Los Angeles.

The win was the Pelicans’ 9th in a row and it kept them in sole possession of 4th place in the Western Conference team standings.The Pelicans are now 36-26 or half a game ahead of #5 San Antonio and #6 Minnesota plus also just one game behind #3 Portland.

The Pelicans’ current playoff position is rather surprising since the team lost All-Star center DeMarcus Cousins to a season ending injury on January 26, 2018. Given up for dead, the Pelicans refused to fold and have instead battled back to make a strong final push heading to the postseason. 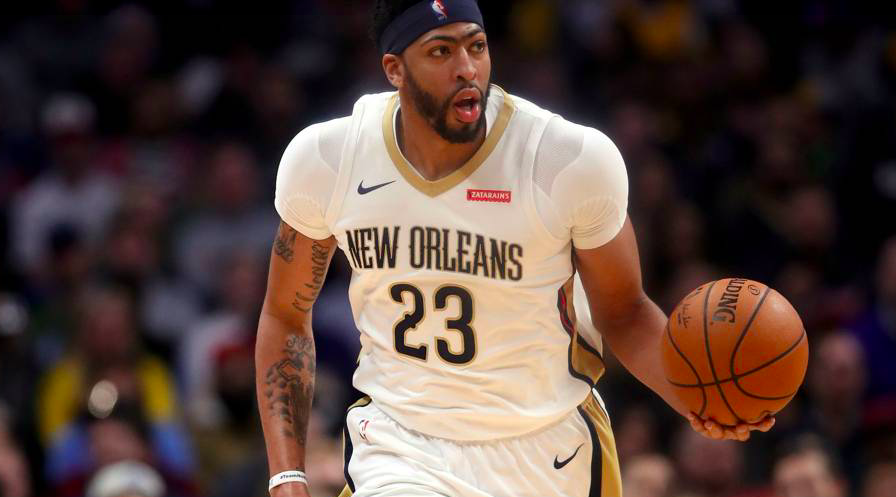 Anthony Davis has been at the forefront of the Pelicans’ resurgence. Since losing DeMarcus Cousins to a season-ending achilles injury, the Brow has been on a tear. Davis averaged 35.0 points and 13.0 rebounds in the month of February. During that month, the Pelicans went 9-3 and have moved up the playoff ladder in the Western Conference.

Right now, the Pelicans have won 9 games in a row with Davis not only recording double doubles in each of those nine games but him putting up otherworldly numbers over that period. Davis averaged 41.5 points, 15,0 rebounds and 3.2 blocks per game in the first six games of the winning streak. He’s broken the 40 point barrier five times in those nine games, including the monster 53 point night against the Phoenix Suns on February 26, 2018.

On Tuesday night, Davis led the Pelicans’ attack again with 41 points, 13 rebounds, 3 steals and 3 blocks. After a slow first half where he scored just 10 points, Davis exploded for 19 points in the third period to keep the Clippers at bay. He scored the go-ahead basket with 30.5 seconds left in the final period and prevented a comeback by the stubborn Clippers.

Not Just The Brow 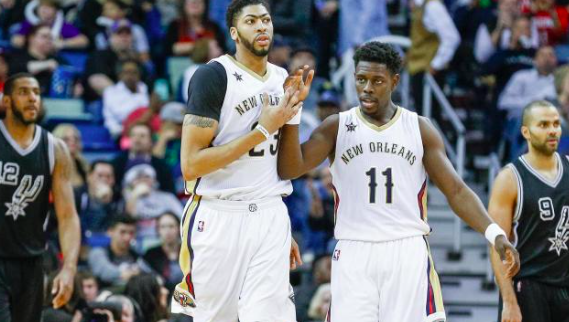 Davis’ herculean effort has landed him in several MVP conversation tables as of late. But while Davis has gotten bulk of the credit for the Pelicans’ recent ascent, he isn’t the only player on the team that has been doing more than what is expected of him. Aside from Anthony Davis, eight year guard Jrue Holiday has silently put up an equally remarkable season for the Pelicans.

Flying under the radar, Holiday has averaged 25.11 points per game during this 9 game winning streak by the Pelicans. Prior to Tuesday night, Holiday had scored at least 21 points in eight straight games, the longest 20 game streak of his career. While Holiday struggled for just 19 points against the Clippers, he dished out 17 assists and also recorded 2 blocks.
Holiday has been shooting the ball at a red hot 52% from the field in the last nine games. But if you think that he may be only be just on a shooting streak, well he’s been on fire since the month of December. And that’s not just a short hot streak.

Having A Career Season 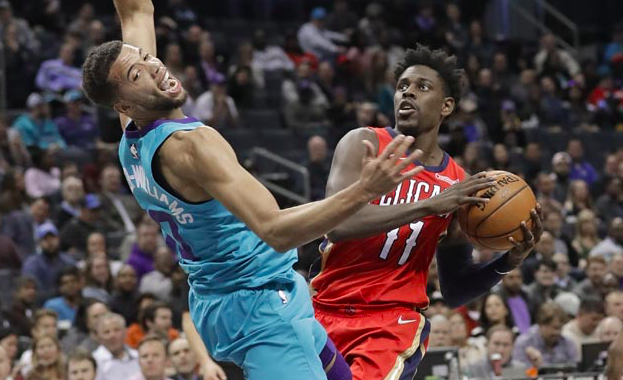 Holiday is currently shooting the ball at a 49.5% average this season. Not only is that a career best for the eight year guard, it also ranks 8th among NBA guards. Among guards who play at least 30 minutes per game, only Klay Thompson, Darren Collison, Ben Simmons and teammate E’Twaun Moore shoot better. Holiday has also scored at least 30 points six times this season, the most in any season of his career.

Sure, Victor Oladipo in Indiana is likely the hands down winner for Most Improved Player of the Year this season. But considering that Jrue Holiday averaged just 15.4 points per game last season and is just a career 14.8 points per game scorer, he should at least be included in the same conversation.

2017-18 has been a career season for Jrue Holiday both on the court and off it. He’s struggled the past four years dealing with various injuries and a recent personal emergency. His 2014 season ended after just 34 games following a stress fracture in his right tibia. The injury carried over to the 2015 NBA season, where he played only a total of 40 games. In 2016, he played just 67 games after suffering a fracture on his right orbital wall. As if those injuries were not enough, Holiday missed the Pelican’s first 12 games of last season to attend to a serious family health issue. 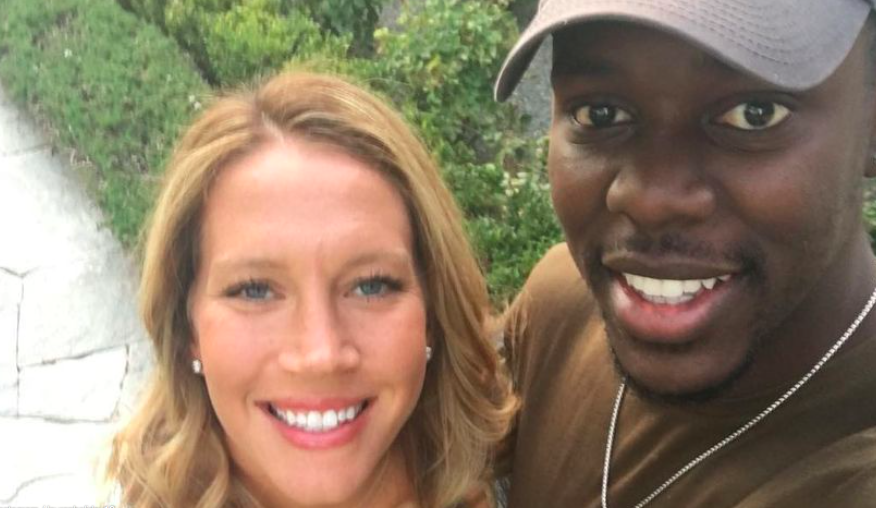 In June 2016, doctors discovered a benign tumor on the right side of his wife’s brain. At that time, Lauren Holiday was pregnant with the couple’s first child, making the situation even more delicate. It was like a punch in the gut for a young couple like the Holidays and almost incomprehensible for a world class athlete like Lauren Holiday.

Lauren was a two-time Olympic gold medalist for the U.S. Women’s National Soccer team. She was in the prime of her professional career when she retired in 2015 primarily to start a family with Jrue, who was the starting point guard of the New Orleans Pelicans. The couple met at the UCLA campus, where Jrue was a star for the Bruins’ basketball team and Lauren a stalwart forward for the school’s soccer team. They became friends before eventually dating when their professional careers took off. The couple married in July 2013, the same month Jrue was traded from the Philadelphia 76ers to the New Orleans Pelicans.

That same year, Lauren was named as MVP of the National Women’s League Soccer. In 2014, she was awarded as the Female Athlete of the Year by the U.S. Soccer Federation. Endorsement deals with Chobani yogurt and Under Armour followed. But in the summer of 2015, Lauren decided to call it quits to start a family with the love of her life.

Everything was going smoothly for the newly married couple until Lauren began suffering painful headaches. An MRI revealed a tumor on the right part of her brain. The good thing was that it was benign and could be removed via surgery. But she had to give birth first. So Jrue asked permission from the Pelicans to take care of both his child and wife. Weeks after giving birth, Lauren had a successful surgery and the couple’s daughter J.T. or Jrue Tyler is now 17 months old.

In January 2018, J.T. made an adorable appearance at the Pelicans shootaround:

Playing To His True Potentials 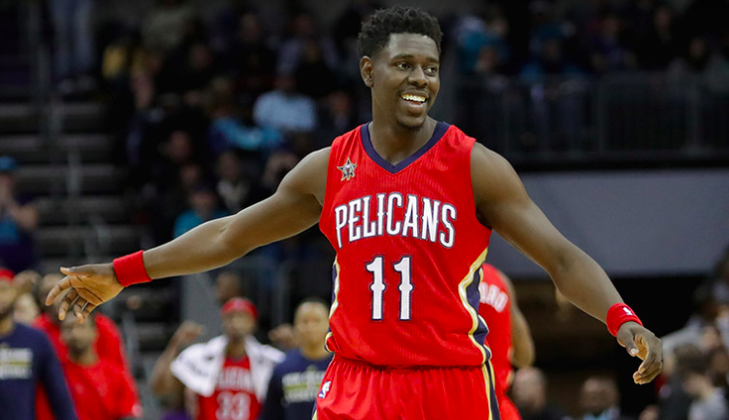 With Lauren slowly getting her normal life back and his daughter ‘assisting’ daddy on the court, Jrue Holiday is finding his shots for the Pelicans this season. It’s been a trying four year stay for Holiday in New Orleans but with his injuries and personal adversities now in the past, Jrue Holiday is finally playing to his true potentials.

The Pelicans hope that Holiday will keep up his strong showing so that he can continue to support Anthony Davis with the scoring load in Cousins’ absence and help the Pelicans get home court advantage in the playoffs. During the six times in franchise history where they’ve reached the postseason, the Pelicans have only tasted home court advantage just once. That was in 2008 when they had their first and only playoff series win ( against the Dallas Mavericks ).

New Orleans has missed the playoff bus the last two seasons and it would be a big accomplishment this year if they reach the postseason and also get home court advantage.Playing before their fans should help their chances of advancing deeper in the playoffs. Should that happen, it’s still going to be Anthony Davis who’s going to get the media mileage ( and deservedly so ). But while not many talk about him, the Pelicans know that they couldn’t have done all these without Jrue Holiday having a career season.