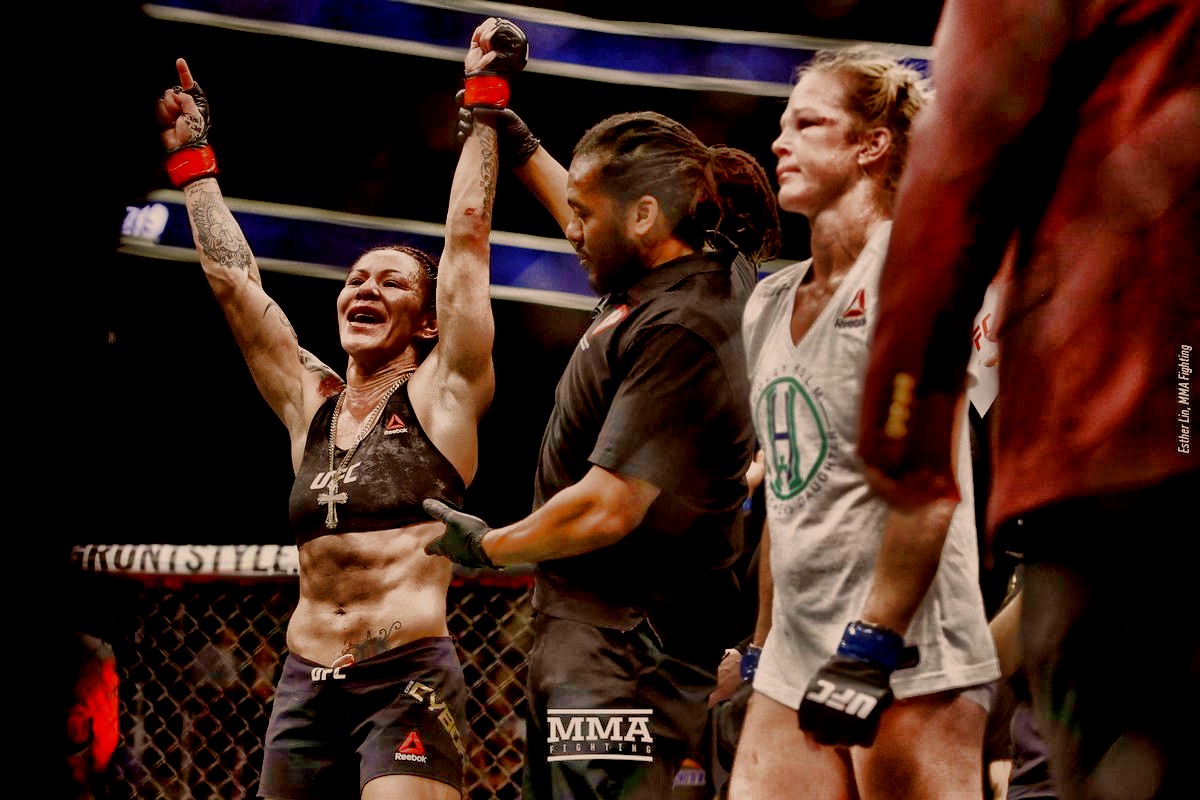 It’s Time To Give Cris Cyborg Her Due

Cris Cyborg came up with dominant unanimous decision win over Holly Holm at the main event of UFC 219 last weekend. But while she proved that she is the best in what she does, there are still those who force themselves to believe otherwise - but foolishly.

Without doubt, Cris Cyborg is the most dominant fighter in women’s MMA. She is the greatest female fighter the sport has ever seen. And no matter what her critics say ( or call her ), they can only do so in envy. 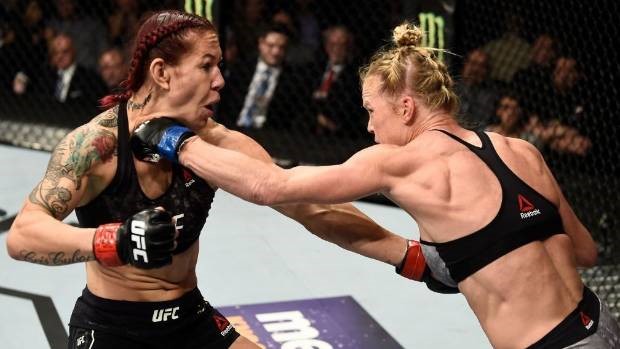 There are plenty of reasons not to like Cris Cyborg. On top of the list is that failed drug test related to her December 17, 2012 Strikeforce title defense against Hiroko Yamanaka. She won that fight via 16 second TKO but the victory was overturned and Cyborg was subsequently suspended by the California State Athletic Commission for one year after testing positive for stanozolol metabolites.

Since then, she has been labeled as a ‘drug cheat’ perhaps not only because of that lone doping violation but because of the reputation of MMA fighters coming from Brazil. But it’s not Cyborg’s fault that she’s Brazilian nor is it her fault that she is naturally big and masculine as compared to her rivals.

It didn’t help that in December 2016, she tested positive for the banned diuretic spironolactone. Her defense was that the drug was prescribed by her doctor to help her with her weight cut. The USADA granted her a therapeutic use exemption ( TUE ) which prevented her from getting another suspension. 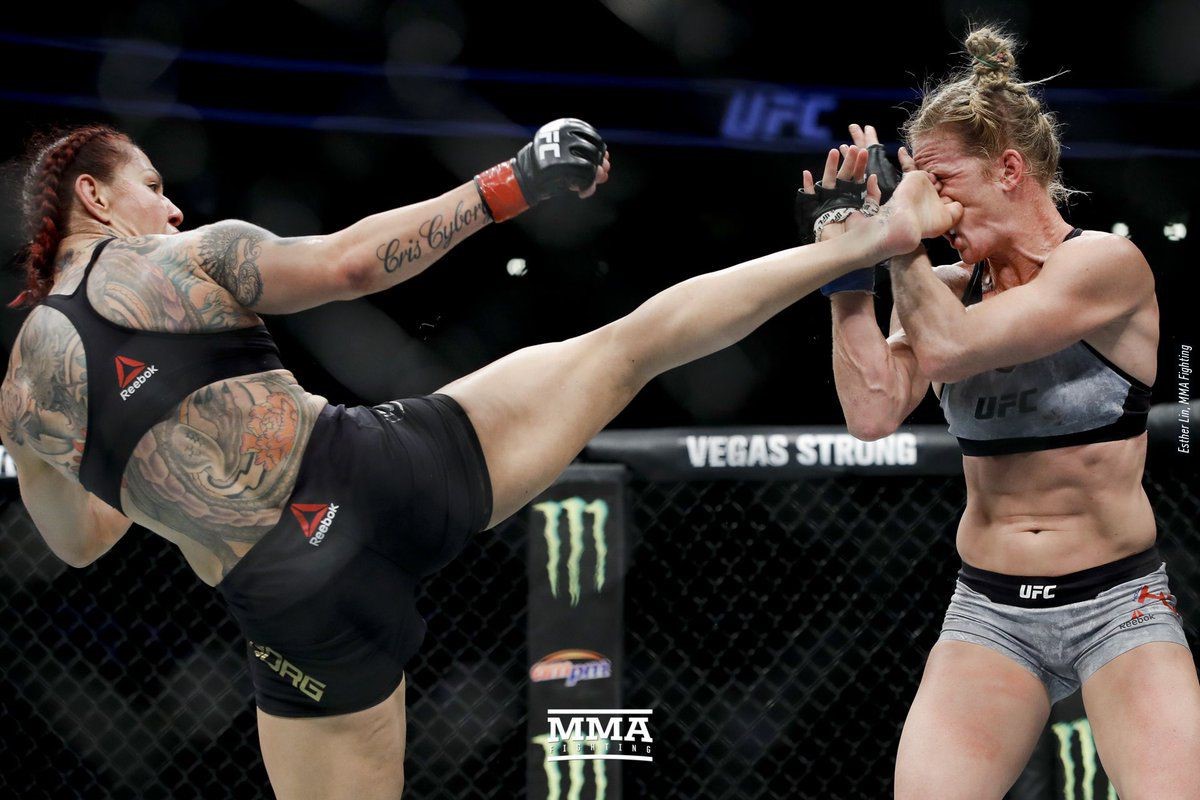 Then there was Ronda Rousey, the former UFC bantamweight champion who took the MMA world by storm. Rousey was the anti-Cyborg - an all-american with a smile that could launch a thousand ships, an Olympic judoka who successfully transitioned to MMA and become the biggest and most popular female fighter in the sport.

Rousey was groomed to bring women’s MMA to new heights. She did but along the way, UFC President Dana White used Cyborg as one of Rousey’s storylines. White created a rivalry, which only existed in his mind. He drummed up a fight between Rousey and Cyborg as if it were a battle between good and evil.

But everything was just for the show ( and to hype up Rousey ) as White put up ridiculous stipulations for the fight to happen. At first, they wanted Cyborg to move down to bantamweight to face Ronda and then later said that meeting at a catchweight of 135 pounds would be ‘fair’’ to both sides. 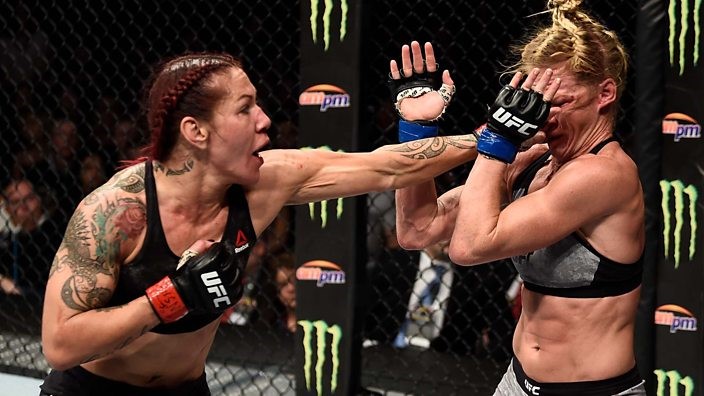 That fight never materialized because it was almost physically impossible for Cyborg to make 135, much more 130 pounds. Rousey became an icon and pulverized every girl the UFC put in front of her. She looked invincible, that was until Holly Holm knocked her out and sent her falling back to Earth.

With Rousey’s invincibility gone, the UFC tried to build around Holm but she lost the belt in her first title defense against Miesha Tate. Tate looked like she could’ve been the next torchbearer too, but like Holly, she lost the title to Amanda Nunes during her next fight. Nunes is still the current bantamweight champion but she doesn’t possess the star appeal of Rousey, Holm or Tate.

With no clear alpha female, the UFC finally thought it was time to bring the true superstar. They allowed Cyborg to fight at catchweights before finally creating a featherweight division which was long overdue. While Cyborg didn’t fight in the inaugural title bout, it was clear that the division was made for her. In no time, she wrested the belt but still, her doubters pointed to her shallow fight resume. 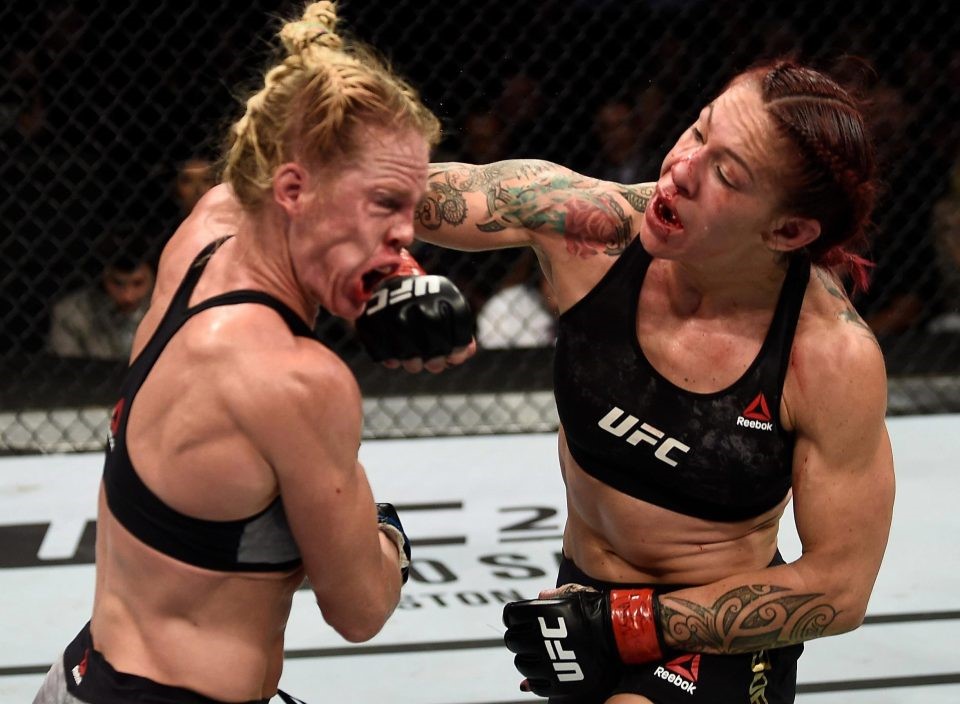 Cris Cyborg became a star after she annihilated Gina Carano to win the Strikeforce women’s featherweight title in 2009. But the dearth of big name competition and the lack of promotion of women’s MMA put her on the backseat of the sport’s limelight. Still, she continued to dominate like no other.

Since losing her first professional MMA fight in 2005, Cyborg has racked up one dominant victory after another. She won her next 20 bouts ( including the one that was overturned into a no-contest ) with relative ease. But without a signature win, she never got the respect she always deserved.

And then there was Holly Holm. Holm’s background as a former multiple time world boxing champion and kickboxer were supposed to give her a good shot at beating Cris Cyborg. Holm is perhaps the most technically equipped striker in women’s MMA, Cyborg notwithstanding. She also had the size that could match Cyborg pound for pound. 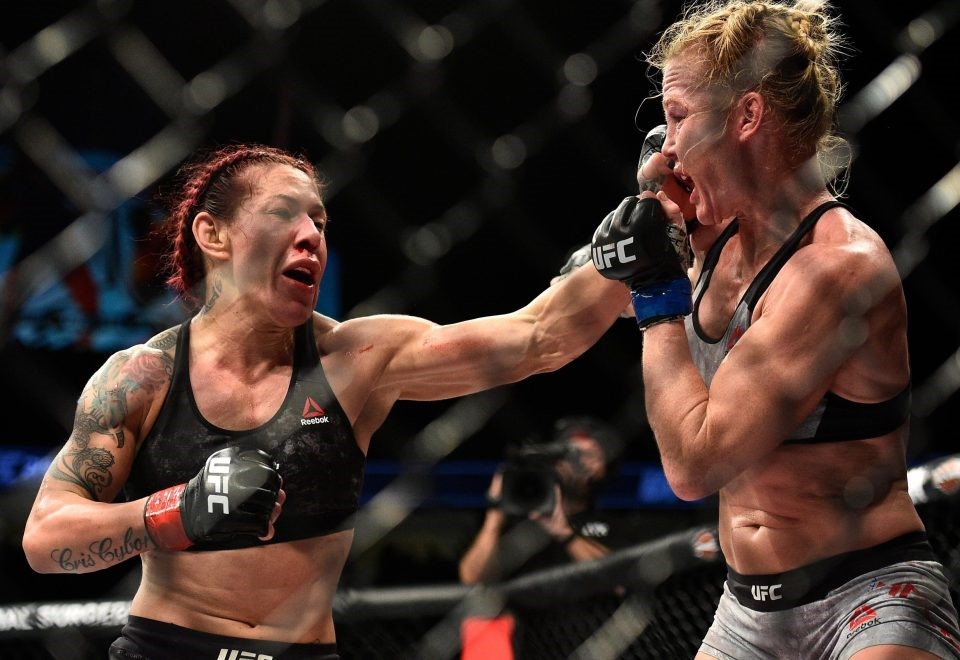 So at UFC 219, headlining her first major PPV event, Cyborg entered the octagon against the biggest challenge of her MMA career. And while the scorecards didn’t show it, it was a one-sided affair that made us affirm what was always obvious - that Cris Cyborg is a beast and that she is for real.

Sure, we’ve seen Holly Holm lose a fight before - to Miesha Tate, to Valentina Shevchenko and then to Germaine Randamie. But we have never seen the Preacher’s Daughter get beat up like she did against Cris Cyborg last weekend, not even when she was a boxer or a kickboxer.

Make no mistake, Holm put up a great fight. Before UFC 219, Cyborg had never gone past round three and had never seen a round five before. Nor had she been hit and challenged like Holm did. Still that did not matter. While Cyborg didn’t score a knockout, she surgically picked Holly Holm apart and almost reconfigured her face. 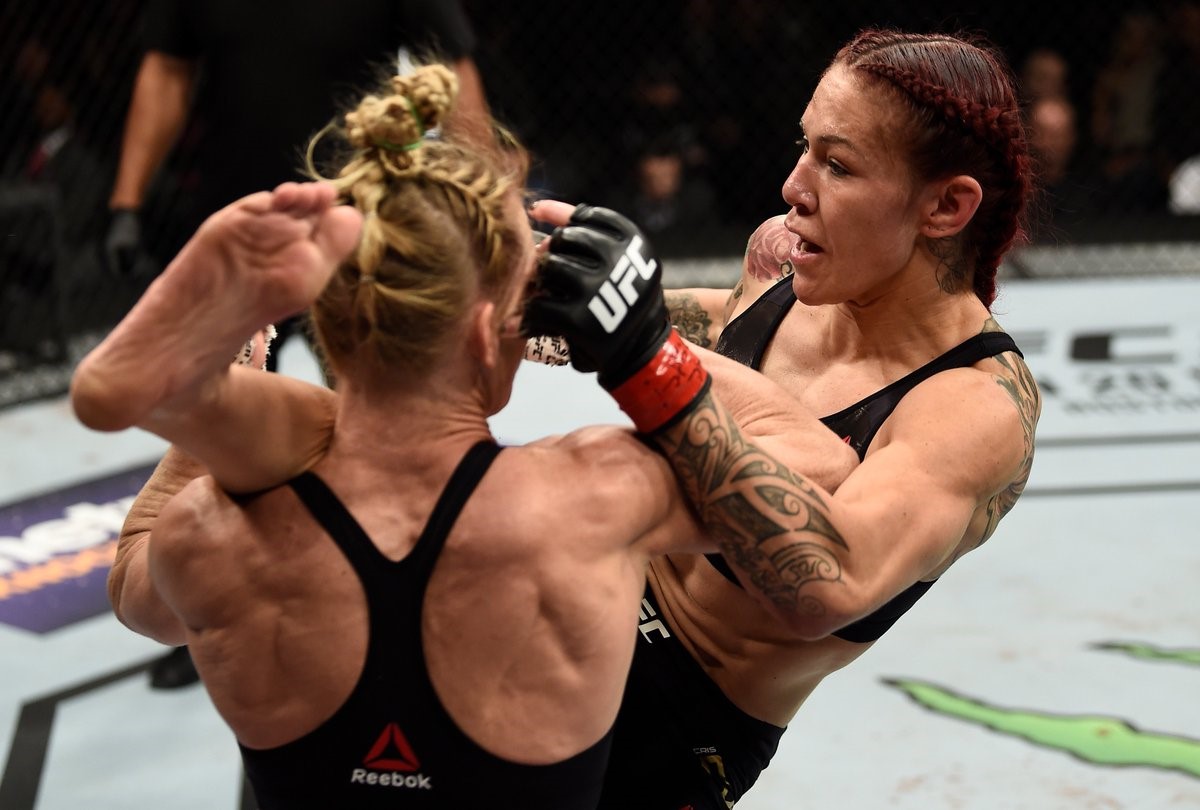 Even in victory, Cris Cyborg was humble. When asked if she thought she is the greatest women’s fighter ever, she only said:

“I never think like that,” Cyborg said at the post-fight press conference. “I let my fans think about that. I just have to keep training and keep learning, because the girls are going to beat me, and I have to be ready.”

With Amanda Nunes’ team recently saying they want to fight the winner of Cyborg-Holm, a super bout with the current UFC women’s bantamweight champion could be next. Nunes’ ATT coach said that they believe their fighter can rule the featherweight division as well. If that fight happens, one of them could hold two belts at one time, making history but putting the women’s division in the same dilemma as what Conor McGregor has placed the men’s side.

When pressed for a name, Cyborg mentioned Megan Anderson, the Australian whom she was originally scheduled to fight at UFC 214 but who pulled out of the fight due to ‘personal reasons’. As to why Anderson, Cyborg said that she wants to bring attention to the women’s featherweight division and help grow the weight class.