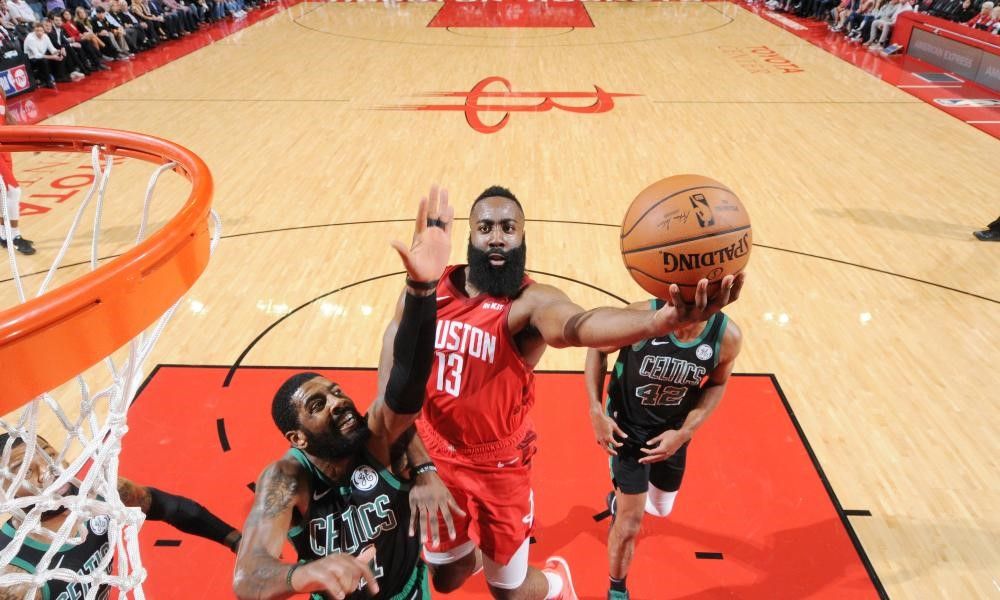 James Harden is Cooking, The Rockets Are Winning

The Houston Rockets are suddenly looking the world beaters again. After struggling since the start of the season, the Rockets seem to have gotten things going. And the reason is none other than the reigning NBA MVP James Harden who is having one of the best stretches of his basketball career.

On Christmas day, Harden scored 41 points to lead his Rockets over Russell Westbrook, Paul George and the Oklahoma City Thunder. That same day, Kyrie Irving hit one clutch basket after another en route to 40 points as the Celtics knocked off the Philadelphia 76ers in a thrilling overtime game. Two days later, Harden and Irving went head to head as the Houston Rockets visited the Boston Celtics at the Toyota Center in Houston. But instead of seeing a battle royale, the game turned into the James Harden show.

Playing with a bruised left calf, the reigning NBA MVP started like a house on fire, scoring 17 points in the first quarter and finished 11-26 from the field, 9-18 from behind the three point line for a total of 45 points to lead the Rockets to a 127-113 home win over the Celtics.

"You take those shots, you're confident in those shots and those shots will go in," Harden said after the game. "Sometimes they might not go in, but mostly, they'll go in. I just have to keep going, keep working."

The win was Houston’s eight victory in their last nine games and 19-15, it put the team four games over the .500 mark for the first time this season and in the driver’s seat of the Western Conference’s Southwest Division with a half-game lead over the San Antonio Spurs. For Harden, it has been a magical nine-game run.

It was the 8th straight game where Harden has scored at least 30 points and the third time in the last six games where he’s scored 40 or more points. Harden’s run of 8 consecutive 30-point games is the longest in the league since Russell Westbrook had eight consecutive 30 point games in November 2016. Harden has also scored at least 35 points in six straight games, the longest such streak since Carmelo Anthony scored 35 or more points in six straight games in 2013.

In his last nine games played, Harden has averaged 39.2 points, 5.6 rebounds, 8.2 assists and 2.0 steals per game while shooting 44.7% from the floor and 40.7% from behind the three point line. According to ESPN’s Elias Sports Bureau, Harden’s 388 total points scored over his past 10 games are the most by any player since Kobe Bryant scored a total of 396 points during a 10-game period in 2007.

"He just has a mastery of the game and a control and an ease at which he plays," Rockets coach Mike D'Antoni said. "It's fun to watch. On this side, it's fun."

For the Rockets, it’s but fun for the rest of the league, it’s scary. The Rockets are without Chris Paul who is out for at least a couple of weeks with a hamstring injury yet the Rockets have beaten the Spurs, Thunder and Celtics in succession. Critics are saying that the Rockets lost their depth during the offseason and that Harden and Paul would have a hard time replicating last season’s success without firepower from the bench. But lately, Harden has proved that he can carry his team on his shoulders without Chris Paul.

"I think what James is doing is really special because he's really carrying us right now," Gerald Green said. "Not only is he scoring, he's leading us."

We’ve seen heroic performances like Harden’s come up short because it’s going to take a team effort to win an NBA title. Russell Westbrook had a super human season two years ago when he won MVP. But he could not take his Thunder team past the first round of the playoffs. Harden knows that first hand because it was he and the Rockets who eliminated Westbrook and the Thunder that season.

The Rockets have recently added guard Austin Rivers to strengthen their bench and to provide Harden and Paul the needed bench production to compete with the elite teams. Rivers has scored 10 points in each of his first two games with the Rockets, hitting 7-14 shots including 4-9 from the three point area in 32 minutes of playing time per game.

Rivers isn’t going to replace Chris Paul and there are worries about how he would mesh with CP3 considering the issues surrounding them when they were still with the Clippers. But if Rivers continues to play the way he has, I think he’s going to get better in Houston and in the long run, he is going to make the kind of contribution that the Rockets have missed after Trevor Ariza left in free agency.

Of course when Paul returns, he is going to provide the Rockets with the points, assists and the playoff experience. Remember that the Rockets were one game away from eliminating the Golden State Warriors in last season’s Western Conference Finals. But Paul got hurt and missed the final two games of the series. The Warriors won both games and the rest, as they say, is history.

No question the Houston Rockets are no longer the same team they were last season. But this year’s version is slowly growing to be a similar monster. Harden is beginning to put up the same numbers that made him MVP last season. It won’t be a surprise if he repeats as MVP if he continues to play this way. But that’s secondary. The Rockets want to go all the way this year. They certainly don’t have the best line-up in the league nor do they have the deepest roster in the NBA. However, they have the reigning NBA MVP and he’s playing like one right now. James Harden looks unstoppable but that’s not the issue. It’s the fact that he isn’t showing any signs of slowing down.