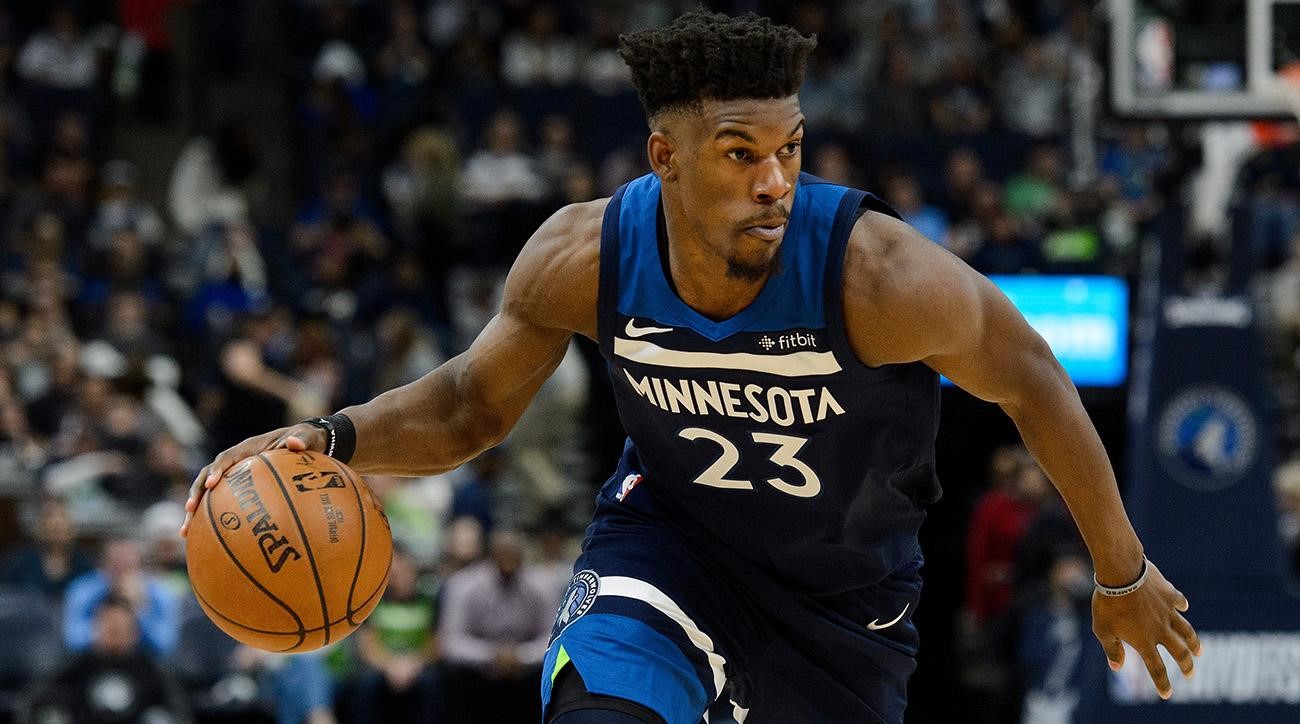 Jimmy Butler has turned down a four year $100M contract extension offer from the Minnesota Timberwolves. According to team owner Glen Taylor (via ESPN 1500), Butler declined his offer because Butler is betting on getting a bigger offer next summer when the NBA’s salary cap increases significantly.

Butler was a key contributor to the Wolves’ successful 2017-18 season. Although they got the early exit, Minnesota broke a 14 year playoff drought last season. Prior to the 2017-18 season, the last time Minnesota reached the postseason was during the time of Kevin Garnett.

Butler averaged 22.2 points, 5.3 rebounds and 4.9 assists per game in his first season with the Wolves after being traded from the Chicago Bulls in 2017. But more than getting more money next summer, there are reportedly other reasons why Butler doesn’t want to extend his stay in Minnesota.

Let’s talk about these one by one.

Complaining About His Minutes 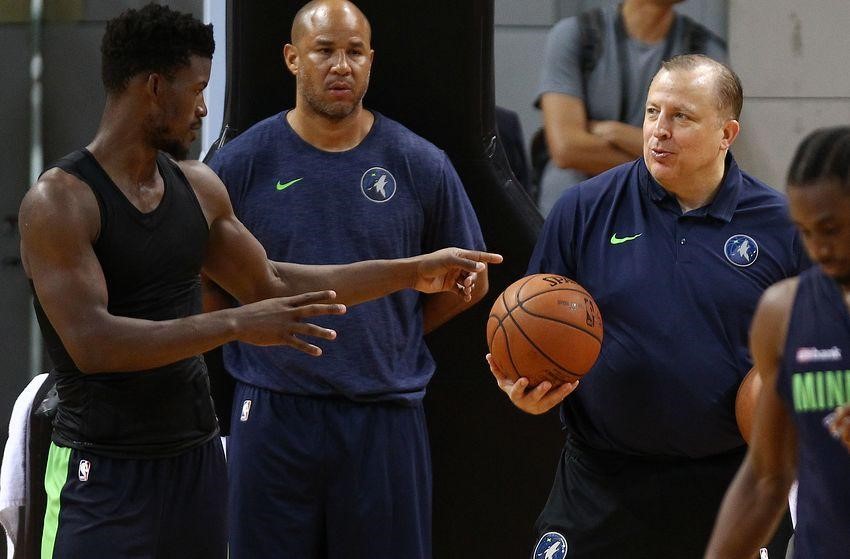 While it cannot be disputed that Tom Thibodeau turned the Chicago Bulls into a serious title contender, he also squeezed his top players for minutes. So while he delivered the results, his superstar players also suffered the consequences of high mileage.

Derrick Rose was a superstar in his early days with the Chicago Bulls. He won Rookie of the Year 2009 and was NBA MVP two seasons later. But during his first three seasons, Rose averaged 37 minutes of playing time per game. Remember that Rose started having knee problems after winning the MVP award in 2011. Surprisingly, Rose is playing for Thibs at Minnesota right now but the 29 year old is no longer the explosive player he once was.

During his All-Star seasons, Joakim Noah averaged 36 minutes of playing time under Thibodeau. Sure, Noah won the Defensive Player of the Year award in 2014 but four year later, he is virtually unheard of. Noah underwent left shoulder and knee surgeries while he was in Chicago.

Before the All-Star break last season, Butler was already ‘complaining’ about his minutes. In a post game interview, Jimmy Buckets told a reporter that the 40 minute games are ‘adding up.’ From a comfortable 36-26 record before the break, the Wolves fell to mediocrity after Butler suffered a torn meniscus. When he returned to action in April, Minnesota was holding on dearly for playoff life with the 8th spot in the West.

Frustrated With His Teammates 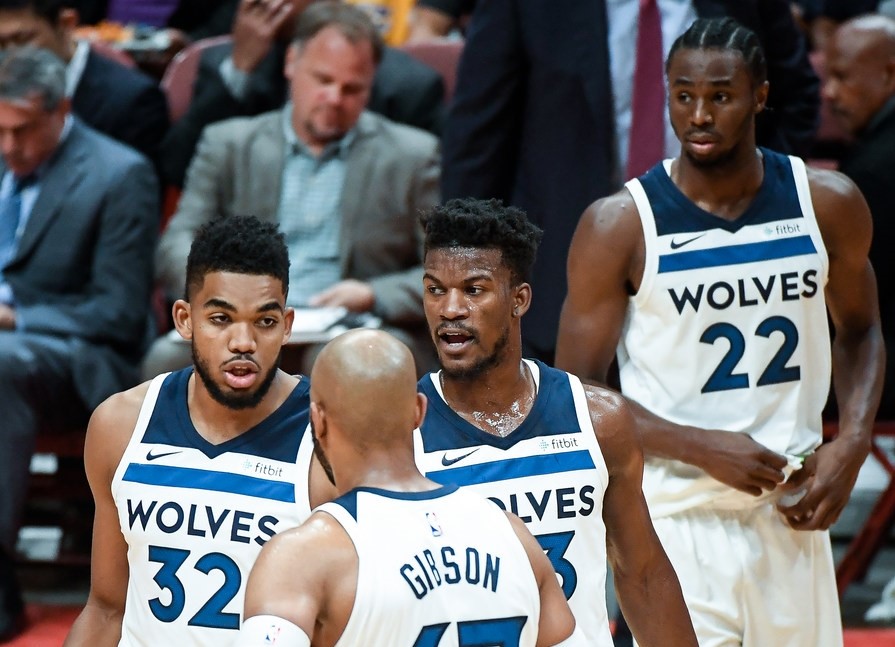 Aside from his reported problem with his playing time, Butler also reportedly also became frustrated with his younger superstar teammates. According to one report, Butler “had problems” playing with Wolves guard Andrew Wiggins last season. The report pointed to Wiggins’ work “ethic and his approach on the defensive end of the floor.”

Thibodeau reportedly had the same concerns about Wiggins and he thought that by bringing in a veteran leader like Jimmy Butler would bring out the best in Wiggins. But after a breakout season where he averaged 23.6 points per game in 2017, Wiggins’ game regressed with Butler around.

The 23 year old Wiggins saw his shot attempts decrease by four per game and his scoring averaged dropped to 17.7 points per game last season. Worse, the Wolves signed him to a $146M contract extension before the 2017-18 season, meaning the Wolves had no choice but to patch things up if they want to keep Jimmy Butler. But Wiggins wasn’t the only young star that Butler grew frustrated with.

A report by the Chicago Sun-Times said that Butler had become “fed up with the nonchalant attitude of his younger teammates, especially Karl Anthony Towns.” This report came out during the time when it was also reported that Towns and the Timberwolves “were not in a good place internally”.

Towns had reportedly become disgruntled and right there and then, trade rumors ran out from the rumor mill. Towns is due for a contract extension this summer and the reports are that he and the Wolves are already negotiating a max contract extension with their prized unicorn.

If indeed Jimmy Butler has issues with Andrew Wiggins and Karl Anthony Towns, then we can believe that the reason why Butler didn’t sign the Wolves $110M offer sheet is because he no longer wants to play with those two young stars. But while he was open in saying that he is “uncertain about playing with Andrew 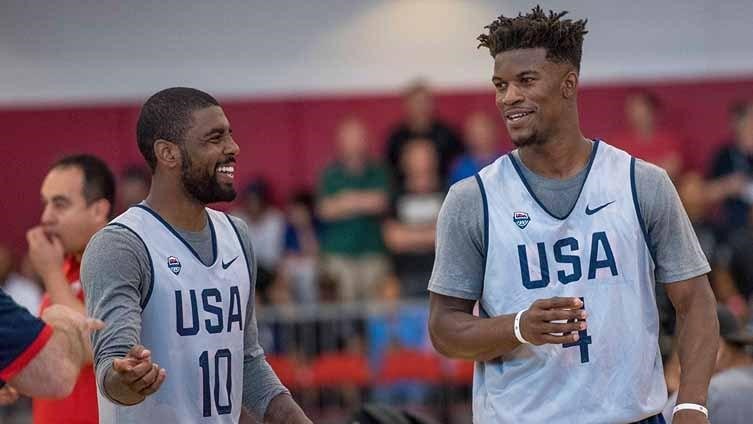 Last week, Jimmy Butler liked an Instagram comment saying “Jimmy To Spurs”. That led to speculation that Butler may want a trade to San Antonio. But even before that rumor heated up, Butler “liked” another Instagram comment and this time it was about playing with Kyrie Irving in New York.

Irving transferred to the Boston Celtics last season after demanding a trade from his original team, the Cleveland Cavaliers. Irving was also due for a contract extension this summer but the All-Star guard said last June that an extension this summer “would not make sense contractually”, meaning he is going to test free agency next season.

Now Irving has been linked to the New York Knicks. Chris Mannix of Yahoo Sports recently said in his podcast that the Celtics are “scared” that Irving might leave next summer and that the New York Knicks are a potential destination. The Knicks are on a massive rebuild and are expected to go all out in the 2019 Free Agency market where Irving will be available. Aside from Irving, Kevin Durant is also a high value target for the Knicks.

The Knicks rumor began when Irving told injured Knicks big man Kristaps Porzingis that he’d “like to play with him one day”. Porzingis is the ultra talented 7 foot unicorn who is touted to be the next franchise player for the Knicks. He is currently out with an ACL injury but is expected to be back during the middle part of next season.

The Celtics consider Irving as their franchise player. But the team proved last season that they can win without Irving and Gordon Hayward, the other injured all-star on Boston’s roster. Hayward has a long friendship with Celtics’ coach Brad Stevens. With the rise of young stars like Jaylen Brown, Jayson Tatum and Terry Rozier - who are all less expensive to keep than Irving, there are rumors that Boston may be willing to part with Irving.

Irving reportedly wants to team up with Butler in Boston or any team in the Eastern Conference. The talk is that these former USA Basketball teammates want to ‘build and elite backcourt” in the Eastern Conference. Even before Irving was trade from the Cavs, he included the Chicago Bulls among his wish list because he wanted to team up with Butler. With both becoming free agents next season, there is a possibility of that happening.

For sure, Jimmy Butler is making a huge gamble in turning down the Wolves’ generous contract extension offer. But if Butler’s gamble is correct, he can make more money next summer when he becomes a free agent. However, there are more unknowns than there are guarantees.

Butler has been a relatively healthy player. But last season, he suffered tore a meniscus in his right knee and missed a good number of games. While we don’t want any injury to happen to Jimmy Butler (or to any other player for that matter), the risk of injury is always there in a contact sport. Much more if one plays a significant number of minutes every game, which Butler does in Minnesota.

While Butler is also coming off an excellent season in Minnesota, there is no guarantee that he will keep those numbers. Not with the reported internal problem within the team. Butler’s rumored beef with Wiggins and Towns could lead a trade somewhere and we have seen many stars’ performance decline in a new team, especially one which already has a go to guy or two.

But don’t tell Jimmy Butler these risks. He’s done this before. This isn’t the first time that he has turned down a lucrative offer. Butler declined to sign a $44M extension with the Chicago Bulls before the 2014-15 season. His gambit paid off as he was able to secure a $90M deal the following summer.

Many believe that Butler’s problem with Minnesota revolves around money. Wiggins got his extension, Towns will get his. Had Butler agreed with the Wolves’ offer, he would have easily have a lower contract value with Andrew Wiggins and Karl Anthony Towns. Butler knows he can get next a better deal next summer, that is if he plays another excellent season.

But while the angle of money is for real, Jimmy Butler may be looking for a place where he can finally call home. He’s a guy who beefed with his coach in Chicago when he was the franchise player. So he moved to Minnesota and has become their top producer. But with his frustration with his teammates, he may want a new city. No doubt Jimmy Butler is one of the best two way players in the business. But unless he finds a team he can call home, he will always be remembered as a journeyman who couldn’t get along.