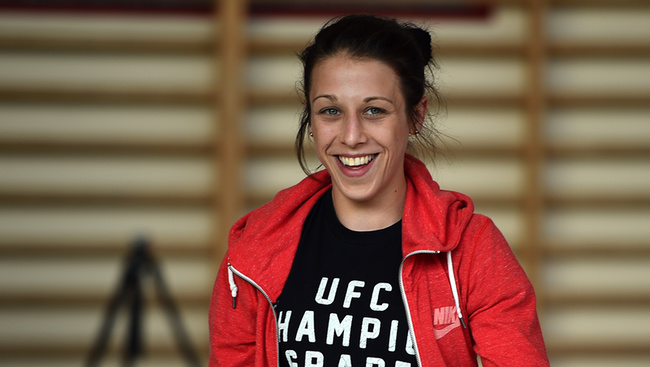 Joanna Jedrzejczyk Says She Didn’t Tap Out Against Rose Namajunas

Three UFC world titles changed hands at UFC 217 last Saturday at the Madison Square Garden in New York and while Georges St. Pierre’s win over Michael Bisping may have been the most historic, Joanna Jedrzejczyk’s loss was perhaps the most unexpected.

Jedrzejczyk has since come to peace with her defeat to Namajunas but if there’s one thing that’s still on the former champion’s mind, it’s the fact that she didn’t tap out at the end of the fight.

Sure, the fight was declared by the referee as a TKO win for Rose Namajunas, but a lot of people, including the broadcast panel who called the fight, thought that Jedrzejczyk did tap. Watch the video for yourself and be the judge:

Joanna was interviewed by MMAFighting’s Ariel Helwani on the latest episode of the MMAHour and Helwani asked Jedrzejczyk about what happened at the end of the fight.. Watch the portion of that interview right here:

Joanna sounded upset when asked about the ‘tap’. She tried to insist that she did not tap.

“Someone said that I tapped, I never tapped,” Jedrzejczyk told Ariel Helwani.
Are you kidding me? It was probably that I was trying to stand up, but I didn’t. It was a piece of a second for me....I know it took a while – from the punch to the ground and pound when I had the turtle position, but for me it was a like a piece of a second. I know it was a few long seconds......It looks totally different than people think it is.”

Got Beat At Her Own Game

When Helwani pushed the envelope, the more Jedrzejczyk insisted that she didn’t and that she merely tried to stand up and probably looked like she tapped because she couldn't get her balance in doing so.

Tapping out is a sign of ‘surrender’ in a fight because a fighter is voluntarily telling the referee that he/she has had enough. That’s very much likely not in Joanna Jedrzejczyk’s vocabulary. She’s too proud a champion to say ‘I quit’. Not after how she intimidated and taunted Namajunas in the lead up to the fight.

But whether Jedrzejczyk tapped or not is besides the point. The fact is that Rose Namajunas beat her at her own game. Thug Rose outstruck the master striker and forced her to quit - whether it was by choice or not.

The result was an upset, which some said was bigger than Holly Holm beating Ronda Rousey at UFC 193. Jedrzejczyk was making her sixth straight title defense. A win would've tied her with Rousey for most by a female champion in the UFC. It was not meant to be.

Namajunas was the biggest underdog in the entire fight card. Jedrzejczyk had beaten every challenger thrown at her. She beat them all with ease, whether they were strikers or grapplers. Joanna was brimming with confidence in the lead up to the fight. She repeatedly taunted Namajunas and tried to get inside her head. But the challenger kept her composure. And all she needed was three minutes and three seconds to change all of that.

Perhaps Joanna underestimated Rose's striking because that wasn't what was written on Namajunas' resume. Prior to UFC 217, Namajunas' record was 6-3. Five of her wins were by submission so if she stood a chance against Jedrzejczyk, it was supposed to be on the ground. But she shocked the world with her ease in striking against arguably the best female striker in the sport.

Despite getting pummeled in a one-sided beating, Jedrzejczyk refused to give credit to Namajunas' punching power and said that she merely didn't see the punch that dropped her:

“I didn’t see the punch, the power of the punch. She didn’t hit hard, you know, but right to the point, I don’t know what happened."

However, Jedrzejczyk admitted that she was out and that the referee was correct in stopping the fight. Still, she couldn't give props to her opponent:

For a woman who dominated her weight class like no other, it's always tough to accept defeat. For a fighter who won multiple world titles in Muay Thai and kickboxing, it was a harder pill to swallow. Prior to the fight, Jedrzejczyk fought a total of 84 times professionally - MMA, kickboxing and Muay Thai combined. She lost just six of those fight, none in MMA.

"I have almost 100 fights in my time in boxing and kickboxing. I had 15 fights in MMA and nothing ever happened before. It was the first time I got cut, someone knocked me down.”