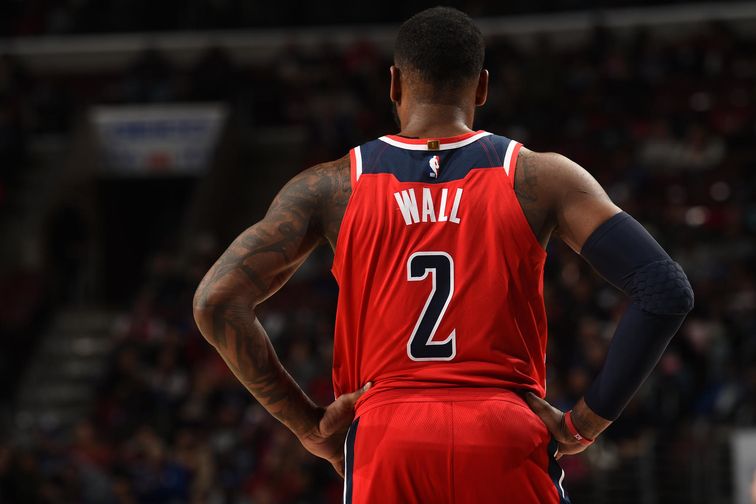 As if the Washington Wizards are not going through enough turmoil, another major issue struck them as All-Star point guard John Wall is set to miss the rest of the season with a surgery on his left heel. Reports have it that Wall has been playing through bone spurs in his heel and the pain has increased so much in the past few days that it has become unbearable for the 28-year old playmaker.

“I’ve been with him for almost three years,” Washington coach Scott Brooks said Saturday before the Wizards hosted Charlotte. “He’s as tough as they come. He never complained. He wanted to compete for his team, but it got to a point where he had to make some tough decisions. And that’s why he met with a specialist.”

Wall and the Wizards are one of the most disappointing teams in the NBA so far. Even with a talent-heavy roster, they are just sporting a 14-23 win-loss card. Considering the lucrative contracts given to their key players, missing the playoffs will be a tough pill to swallow for the Wizards front office.

With that said, Wall is still an All-Star caliber playmaker who has been playing good basketball until the surgery. The 6-foot-4 point guard is averaging all-around numbers of 20.7 points, 8.7 assists and 3.6 rebounds per game. But with his recent setback, there are clamors that the Wizards should break up the core and rebuild the team with young players and future draft picks.

Wall’s injury should be a sign for Washington to rebuild

With offseason acquisitions of Dwight Howard and Jeff Green, the Wizards were poised for a major ascent in a weakened Eastern Conference that won’t have LeBron James for the first time in almost two decades. With James taking his talents to Los Angeles, Washington had the opportunity to surprise East powerhouse teams and make a deep postseason run. With Wall and Bradley Beal running the show, the team was heavily-loaded with a supporting cast that featured Otto Porter, Kelly Oubre, Austin Rivers and Markieff Morris.

Still, the Wizards played below expectations as losses racked up one after the other. With many people already writing them off this season, the team was not ready to give up yet as they made a trade for veteran forward Trevor Ariza in exchange for the up-and-coming Oubre. It was obviously a win-now mindset for the Wizards, considering the fact that they gave up a future franchise piece in Oubre.

But as expected, Ariza’s arrival did little to nothing in improving Washington’s plight and Wall’s recent surgery could be a confirmation that the team should look forward into their future and break up the core. Reports are saying that the team is bent on retaining Beal but they still have major trade assets in Wall and Porter.

Even if the Wizards surprise people and make the playoffs, it’s hard to imagine them making some noise in April. The Wizards should give up this season, negotiate some trades for young players and valuable draft picks, and make a play for a lottery pick in the 2019 draft.