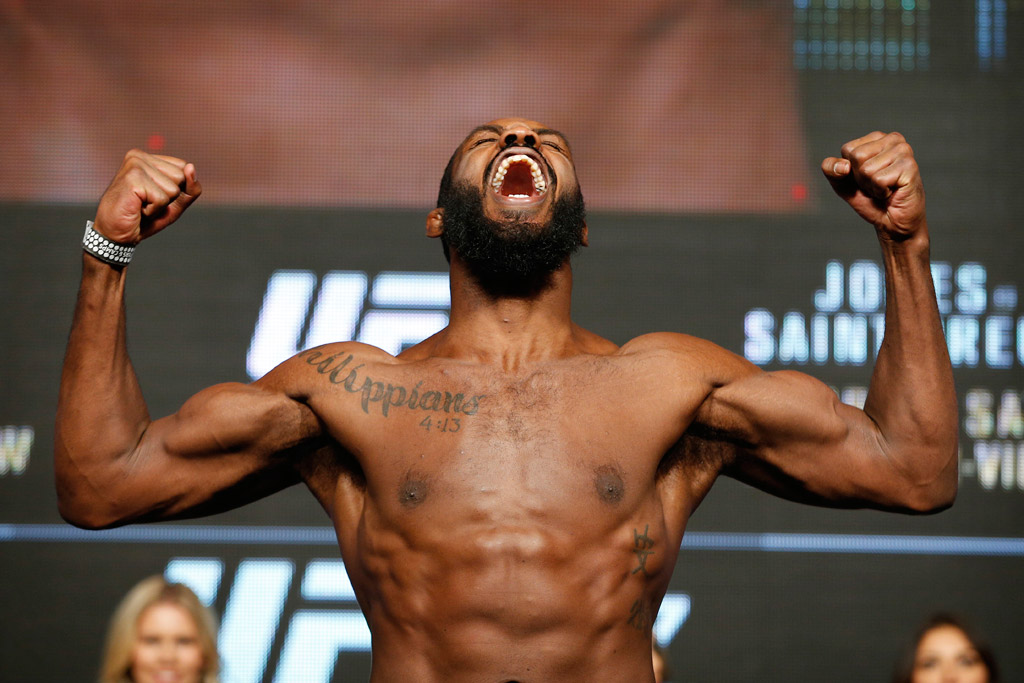 Daniel Cormier did his job. Now the true king of the UFC’s light heavyweight division is back.

Jon Jones knocked out Daniel Cormier in round 3 of their UFC Lightheavyweight title bout at Honda Center in Anaheim, California. The bout was the main event of UFC 214, the promotion’s most stacked event of the year.

Earlier in the night, Volkan Oezdemir opened the show with a stunning first round upset KO of Jimi Manuwa. Then former UFC welterweight champion Robbie Lawler won a back and forth brawl against Donald ‘Cowboy’ Cerrone. Later, Cris Cyborg finally completed her trophy case by winning the UFC women’s featherweight title with a victory over a game Tonya Evinger. In the co-main event, Tyron Woodley then retained his UFC welterweight title by stuffing all of Demian Maia’s takedown attempts. But it was the main event that the whole world was waiting for.

Ever since their rumble at a promotional event for UFC 178, Jon Jones and Daniel Cormier became the worst of rivals. The two finally met at the main event of UFC 182 where Jones easily defeated Cormier 49-46 across all scorecards. Following that victory, Jones career spiralled downwards, thanks to his many brushes with the law.

In April 2015, the UFC stripped Jones of his title after being involved in a felony hit and run incident. Cormier beat Anthony ‘Rumble’ Johnson for the vacant belt and assumed Jones’ throne. After Jones’ suspension, the two were set to meet in a rematch at UFC 197 but Cormier suffered a foot injury. Jones went on to beat Ovince St. Preux to become interim 205 pound champion.
Then just when we thought that they would finally meet a second time at the historic UFC 200 in July 2016, Jones was removed from UFC 200 three days before the event after he failed a USADA drug test. The fight was scrapped but the bad blood remained. Jones was suspended for one year and Cormier remained as champion by beating Anderson Silva and Rumble Johnson ( again ) in his next fights. But while DC enjoyed his time at the top, he could not hide from Jon Jones forever.

Jone asserted his dominance over Cormier at UFC 214. He patiently waited for his opening and when he finally got DC to blink, Jones landed a perfectly timed head kick that hurt Cormier badly. Sensing his opponent was hurt, Jones pursued Cormier whose legs gave out on him. With DC down at the side of the cage, Jones unleashed a wicked ground and pound assault that forced referee Big John McCarthy to halt the bout at the 3:01 mark of round three.
With the victory, Jones becomes the UFC’s undisputed light heavyweight champion once again and became the first fighter to stop Daniel Cormier. After his hands were raised in triumph, a seemingly more mature Jon Jones paid tribute to his fallen opponent.

“I want to thank this opportunity to thank Daniel Cormier for being my biggest rival and greatest motivator,” Jones said. “...He’s a model champion, a great human being. He’s a true champion for the rest of his life.”

Cormier’s reign as champion lasted for two years and two months. In between, he suffered the only losses of his MMA career, both to Jon Jones and both convincing defeats. With the loss, the rivalry is officially over.

“If you lose both fights there’s not a rivalry,” a weeping Cormier said. “So I don’t know.”

Cormier didn’t even know what hit him. The fight was back and forth for two rounds with Jones landing more strikes and Cormier coming forward most of the time. Jones kept Cormier at bay with his kicks and jabs while Cormier tried to land big shots on Jones. The first two rounds seemed close but Jones closed the show in the third.

Jon Jones’ dominant win not only puts him on top of the 205 pound scene once again, it puts him back in the conversation for the greatest fighter in UFC history. Jones has always been considered one of the best talents to ever set foot in the UFC octagon but his legacy has always been tainted by his personal troubles.

Jones owns the UFC’s longest current active winning streak at 14. His 11 title fight victories are tied for the second and is just one short of Georges St. Pierre’s all-time record. Jones is the youngest fighter to win a UFC world title at age 23. He also owns several light heavyweight records like most wins, longest winning streak, most consecutive and successful title defenses and most wins by submission.

Jones was the UFC’s best light heavyweight and best pound for pound fighter before he got into trouble with the law. With yet another convincing win over Daniel Cormier, he has placed himself in a pedestal all by himself. Jones has beaten half of the Top 10 fighters in the 205 division including four of the top six. With no immediate challenger seemingly able to topple him in the near future, Jones may have fought his last fight at 205 pounds.

“Lesnar, if you want to know what it’s like to get your [butt] kicked by a guy who weighs 40 pounds less than you, meet me in the Octagon,”

The talk of a fight between the two erupted on fight week when Jones was asked by a fan about the possibility of him facing Lesnar. When Jones replied in the positive, Lesnar was quick to reply ‘anytime, anywhere’. Currently, Lesnar is retired from MMA and is under contract by the World Wrestling Entertainment ( WWE ) until next year. And even if Lesnar is allowed to fight, he will have to serve out the remaining five months of his USADA suspension which was put to hold when he announced his retirement.

However, if the rematch between Jon Jones and Daniel Cormier was able to wait for two years before actually taking place, then a fight between Jon Jones and Brock Lesnar isn’t impossible. And although many say that it is unlikely going to happen, it’s too big and too rich to close the door on. For now though, Jon Jones will have to be content with regaining his spot as the best light heavyweight in the planet.