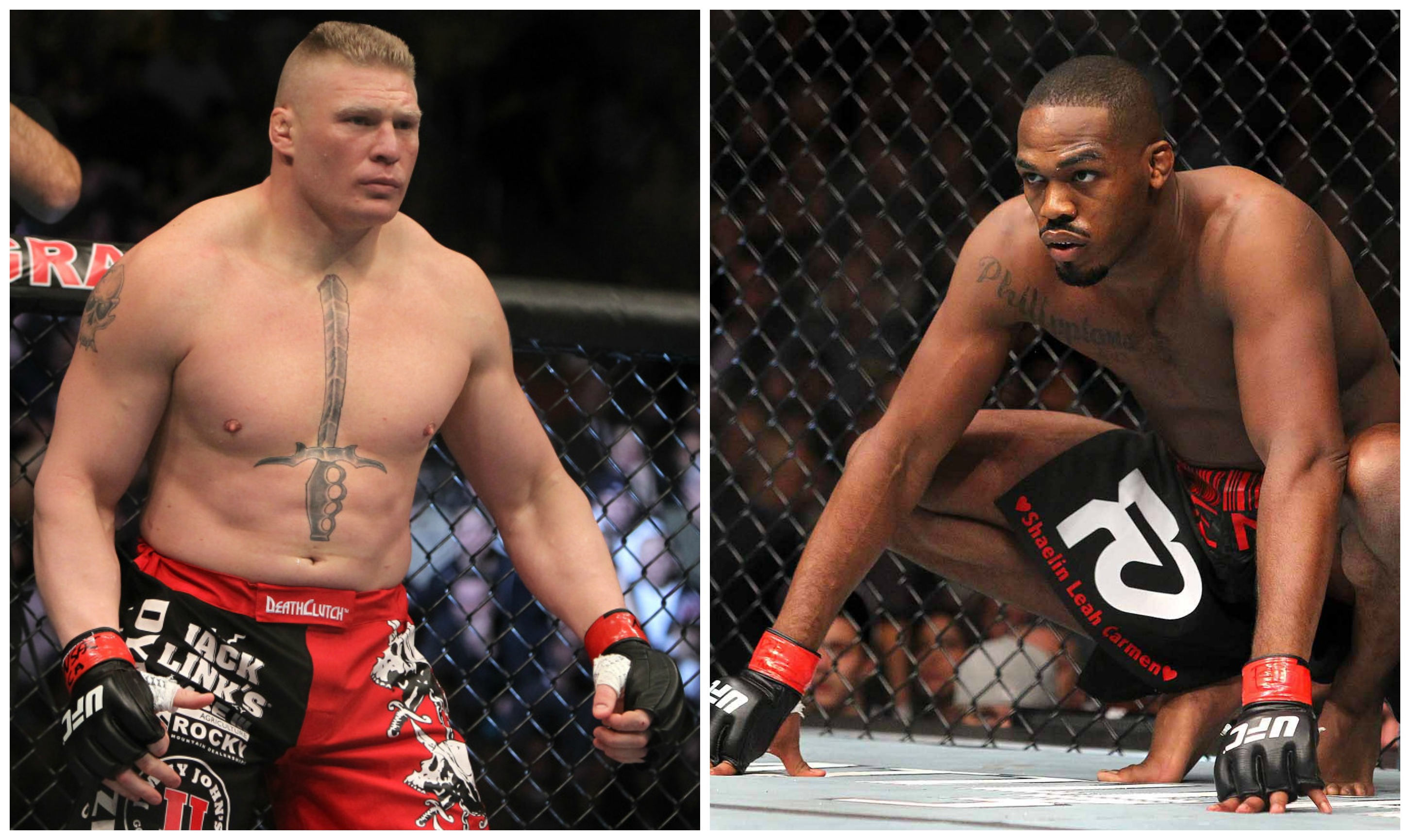 Jon Jones still has to take care of business at UFC 214 on Saturday. Despite that, talks of a super fight with former UFC Heavyweight champion Brock Lesnar have surfaced in the internet. It may have started out as a fan question but we know anything can happen in the UFC.

During a recent Facebook Live chat, Jones told a fan that he ‘would love’ to fight Brock Lesnar.

Lesnar is the former UFC Heavyweight champion who is now competing in professional wrestling’s WWE promotion. He retired from the UFC after failing a drug test last year. Even if he unretires, he will still have to serve out the remaining five months of the USADA suspension which he incurred last year. But very recently, Lesnar’s been rumored to be eyeing a comeback. While the UFC subsequently denied that rumor, Lesnar may really have intentions to return back to the UFC octagon.

If Jon Jones is really interested in taking on Brock Lesnar, Lesnar will be ready: https://t.co/LhV7N0snNx

Hours after Jones made his statement, the Associated Press contacted Lesnar and asked him about Jones’ challenge. Lesnar replied:

“Would I fight Jon Jones? Anytime, anywhere,” Lesnar said. “Right now he should be worried about D.C. on Saturday night.”

Jones is scheduled to fight bitter rival and current UFC Light Heavyweight champion Daniel Cormier at the main event of UFC 214 on Saturday night. Lesnar is a friend of Cormier, who has been king of the 205 division in the two years Jon Jones has been out because of personal troubles.

If Cormier wins at UFC 214, the whole idea of Jon fighting Brock is good as dead. But if he wins on Saturday night, which the oddsmakers are saying he will, who knows what’s going to happen next. Remember that Mayweather vs McGregor was just an illusion when it was first talked about. It’s happening in less than a month’s time.

Not Talked To Lesnar

During the UFC 214 Final press conference on Wednesday, the subject of Jon Jones fighting Brock Lesnar was brought up to UFC President Dana White. As expected, White made a denial in front of the press people:

“It’s crazy. don’t know where that thing came from or how it got started. First of all I haven’t even...talked... Believe me, I haven’t talked to Brock Lesnar. I don’t know.

White appeared to struggle saying out the word ‘talked’. But when he did, he then looked to his left, as if he could not look the reporters in the eye, to ask Jon Jones if he had talked to Lesnar. White added:

Before things could go out of proportion, Jon Jones saved Dana White by making another bold statement about Brock Lesnar. Said Jon Jones:

Whether he truly meant that or he simply wanted to save Dana’s face, only John knows. But what is certain is that a fight with Brock Lesnar would be massive, not just for the UFC but for Jon Jones as well.

Jon Jones is probably the most talented fighter the UFC has ever seen. He was the promotion’s youngest champion ever and the most dominant light heavyweight champion in history. Jones has the tools to be one of the sport’s best ever but each time he’s reached the cusp of greatness, he’s always found himself in trouble.

At UFC 214, Jones has the opportunity to redeem himself, one more time. He also has the chance to win back his belt and end his bitter rivalry with Daniel Cormier. After that, he can be a superstar once again. And what more fitting for a coronation would be a super fight against a big name, the biggest name the UFC had before Conor McGregor.

Jon Jones has beaten Daniel Cormier before. In fact, he’s beaten almost half of the 205 division’s Top 10. If he beats Cormier again, he will have no more legitimate threats in the light heavyweight division. He may have to move up in weight class. He’s talked about it before.

Over the years, Jon Jones has flip flopped on his desire to move up to the UFC’s heavyweight division. Last December, he said it will eventually happen. Against the right opponent:

During the Facebook chat, Jones talked about how he would fight Lesnar:

“I definitely wouldn't try to wrestle with him the whole time,” Jones said. “I would … I’m not gonna tell you what I would do.”

It did sound like Jon already knows how to deal with Brock Lesnar. Is The Beast Incarnate the right stylistic match-up that Jon Jones has been talking about? Maybe we’re going to find out after Jon Jones deals with Daniel Cormier at UFC 214.