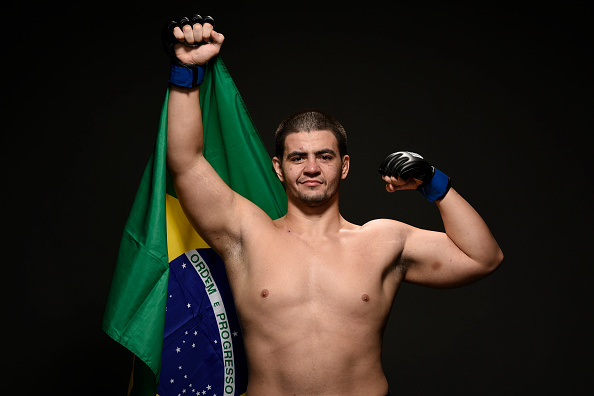 Albini made headlines last July during his promotional debut at the preliminary card of UFC on Fox 25 at the Nassau Veterans Memorial Coliseum in Uniondale, New York . As a +245 underdog and a virtual unknown fighting for the first time on U.S soil, Albini knocked out veteran Timothy Johnson in the first round of their heavyweight encounter.

But that’s not the reason why Albini’s UFC debut was unforgettable. The story behind his road to the UFC was.

During post fight interviews, Albini detailed the struggles he had to go through in order to get to the UFC. These included fighting for free for four years, working as a waiter at restaurants to make ends meet and watching his little daughter make do with used shampoo bottles as toys because he can’t afford to buy her one.

With the money he made in the Johnson fight, the first thing that Albini bought were toys for her daughter. Since then, life has been good for Junior Albini. He says he gets to train without worries and gets to go out with his family on weekends. More importantly, Albini says he can now get her daughter anything that she wants.

On Saturday night, Junior Albini caught the attention of the MMA world again. But this time around, he did so in the ‘wrong’ way. That’s because Albini brought a different kind of look when he entered the octagon for his UFC Fight Night 120 fight against Andrei Arlovski. It was a look like no other:

Paul Felder comments on Junior Albini's "diaper" shorts as the heavyweight makes his way to the octagon. #UFCNorfolk pic.twitter.com/l5HAzMVLDl

If you didn’t notice anything odd about Junior Albini’s look, take a closer look at his Reebok shorts and tell us that you notice something very different:

I know they call Junior Albini " Baby" but those shorts are Ridiculous. pic.twitter.com/hLts1JOald

If you can’t make a diaper out of his shorts, take a look at Junior Albini’s fightwear from other angles. Like this one from fellow UFC fighter Derek Brunson:

Or this rear view image from FloCombat’s Josh Sanchez:

Baby Will Be Back

The UFC Reebok fight kit has always sucked but this was at its worst. We know that Junior Albini is nicknamed as the “Baby” but boy, did he take his monicker too seriously. This Big Baby went to fight night wearing Reebok diapers. Good thing Andrei Arlovski didn’t get too distracted with the attire. The Belarusian Pitbull coasted to an easy ( but rather boring ) 29-28, 30-27 and 30-27 unanimous decision win over Albini.

The win ended Arlovski’s two year losing skid and staved off a possible retirement for the former UFC heavyweight champion. On the other hand, Junior Albini suffered his first loss since 2012 when he was still fighting in a regional promotion called NCF ( Nitrix Champion Fight ) in Brazil. Although it’s going to pull him down in the rankings, the win mattered more to Arlovski than the loss did to Albini.

This was just Albini’s second UFC fight and he fell to 1-1 in the promotion and 14-3 overall. He’s going to get more fights in the future not only because he has the potential as a fighter but because he has captured the fans’ imagination with his inspiring life story. Now you can add his ‘diaper shorts’ to the reasons why we want to see him back soon.