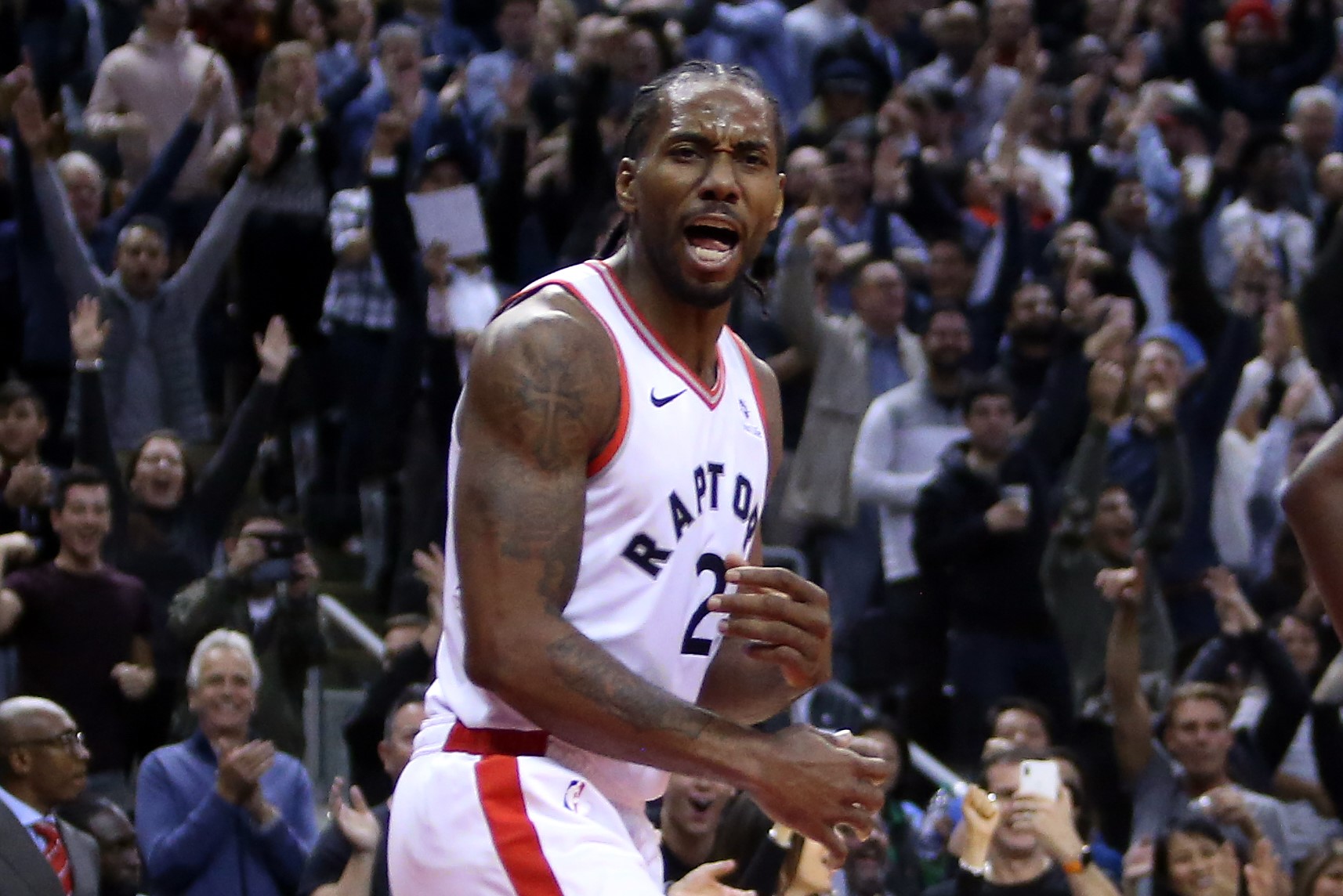 Kawhi Leonard And The Raptors Deliver Early Warning To Their Rivals

It’s still opening week in the NBA but the league’s 2018-19 schedule already has seen several marquee matchups that may be a preview of the 2019 NBA playoffs.

On opening night, the Boston Celtics blew out the Philadelphia 76ers in a rematch of last season’s 2nd round playoff matchup. The same night, the defending champions Golden State Warriors opened their bid for a three peat with a hard earned win over the Oklahoma City Thunder who could easily be their opponent in next year’s postseason. On Friday, the Warriors played the Utah Jazz, a team which experts feel could challenge the Dubs deep in the next playoffs. Golden State rallied for a 16 point deficit and then had to lean on Jonas Jerebko’s tip in with 0.3 seconds left to beat the stubborn Jazz. Earlier on Friday, the teams which are expected to battle for the Eastern Conference Finals, squared off in Toronto.

With LeBron James going West this year, the Boston Celtics and Toronto Raptors are expected to go head to head for the right to replace LeBron’s former team, the Cleveland Cavaliers as the beast of the East.

New Beast of The East?

This season, Boston is considered not just as the favorites in the Eastern Conference but also as the top threats to the title reign of the Golden State Warriors. That’s because good as they were in last year’s playoffs, the Celtics played without their top two players during the entire postseason.

Gordon Hayward missed the entire season with a leg injury while Kyrie Irving was shut down after midseason with a nagging knee. But instead of folding, players like Al Horford, Jayson Tatum, Jaylen Brown, Terry Rozier, Aron Baynes and Marcus Morris Morris stepped up to lead Boston’s deep playoff run.

Tatum was the most pleasant surprise for Boston as he emerged as the Celtics’ top scorer in the playoffs, delivering one spectacular game after another. Likewise, Jaylen Brown continued his steady improvement last season, scoring a career high 14.5 points per game and displaying the poise of a seasoned veteran.

With Hayward and Irving back this season and Danny Ainge deciding to keep last year’s team together, the Celtics have been projected as the best team in the Eastern Conference this season. With one of the great young minds in the game in Brad Stevens calling the shots from the bench, no question Boston is one of the top teams in the league this season. 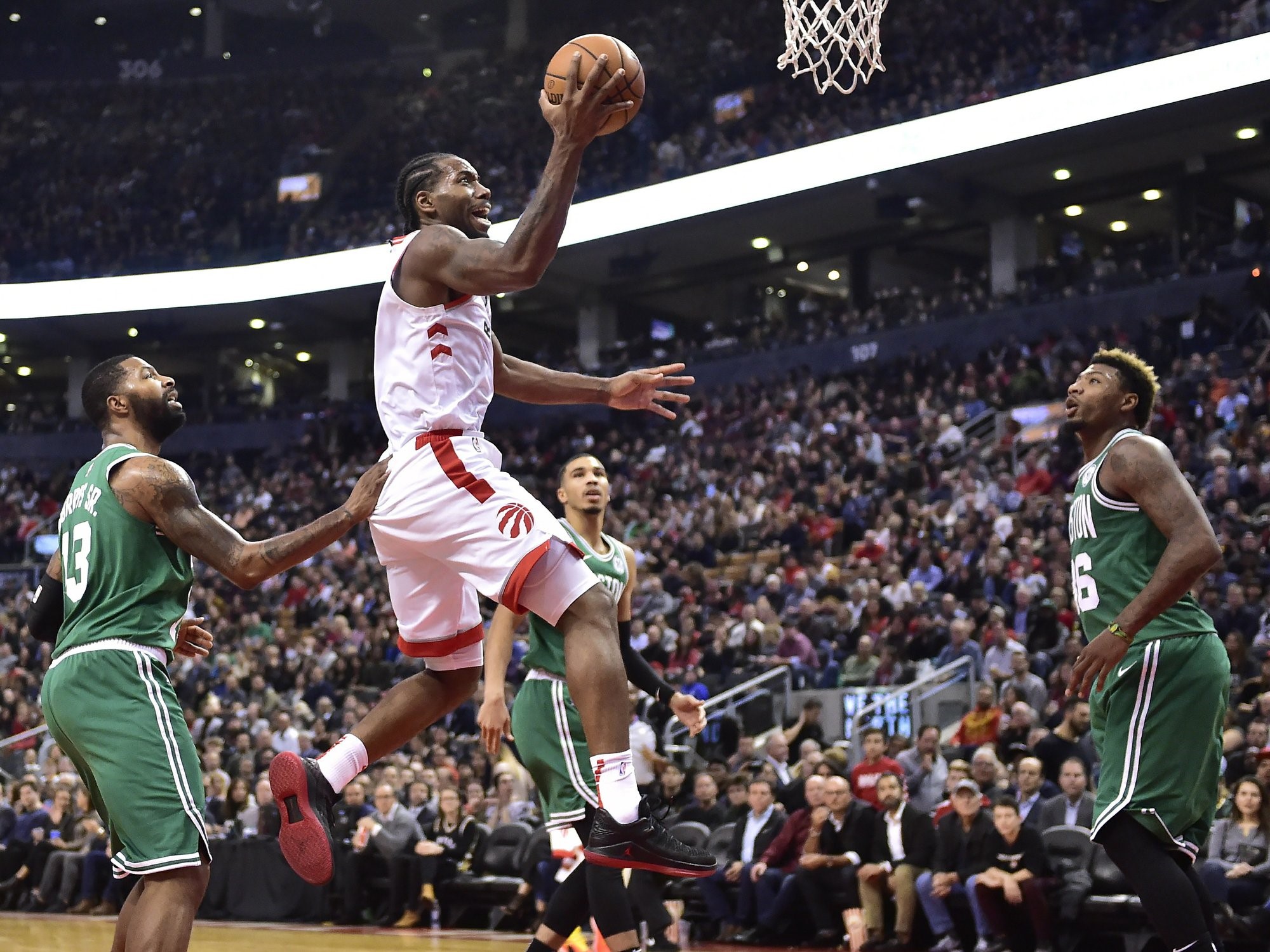 On the other hand, the Raptors took a different turn after last season’s success. They fired head coach Dwane Casey after the latter was named NBA Coach of the Year. Then Toronto went on to trade for the disgruntled Kawhi Leonard during the offseason, giving up one half of its all-star backcourt in DeMar DeRozan.

Aside from Leonard, the Raptors also got veteran sharpshooter Danny Green in the deal. Leonard, if he returns to 100% health, can easily be the next best player in the Eastern Conference with LeBron James gone. Green would provide the Raptors the additional firepower from behind the arc to compete with the top teams in the league who have a myriad of three point shooters.

Aside from the two, the Raptors have a lineup that can be considered as deep as Boston’s. First of course there is still Kyle Lowry who has developed into an all-star caliber player in Toronto. Lowry is at his peak right now, playing the best basketball of his career. At point guard, he is both an excellent scorer and passer. His value though lies in the fact that he is a big time player who is willing and able to deliver in the clutch.

The Raptors are also returning Pascal Siakam, the Cameronian they picked in the draft three years ago. Siakam was a revelation last season and played well in the playoffs. He may be on the verge of finally breaking out this year. The same can be said of O.G. Anunoby who was excellent in last year’s playoff series versus the Cavs.

Fred Van Vleet finished third in last season’s balloting for Sixth Man of the Year. Van Vleet was a valuable closer for the Raptors. Then of course they have big men Jonas Valanciunas and Serge Ibaka, who give them the leverage up front. Ibaka is one of the league’s top defenders while Valanciunas is coming off his best PER season.

Don’t forget Toronto also has the sweet shooting C.J. Miles, who provides them instant scoring off the bench. Miles shot a career best 2.3 three pointers per game last season for Toronto. Together with Danny Green, the Raptors have at least two specialty shooters who can provide them the much needed firepower from behind the three point arc.

And so on Friday, the Boston Celtics and Toronto Raptors squared off in an early showdown of Eastern Conference favorites. Boston was coming off a drubbing of the brash Philadelphia 76ers while the Raptors were coming off an opening day victory over the Cleveland Cavaliers.

For a game on opening week and only the second for both teams, the game had all the ingredients of a playoff contest. The crowd was into the game as both teams traded on big basket after another for 40 or so minutes. Boston led for most part of the game, owing to their incredible balance and shooting.

But after struggling in the first quarter, Kawhi Leonard came to life in the third for Toronto. The former Defensive Player of the Year and NBA Finals MVP poured in 15 points in the third stanza on 5-7 shooting from the floor and 5-5 shooting from the free throw line. With Leonard exploding in the third, Toronto kept the game close despite the Celtics firing from all cylinders and Gordon Hayward playing his best game in his comeback.

The teams went toe to toe in the final period before Jaylen Brown sank a three pointer that gave Boston an 87-86 lead. But Toronto would answer with 6 in a row behind Van Vleet and would take the lead for good. Lowry closed out the Celtics down the stretch by taking a charge on Tatum on one end and making a crucial three pointer on the other end.

Lowry would finish with 15 points on 3-5 shooting from behind the three point area while Danny Green made 4-7 from long range. Serge Ibaka had a monster game with 21 points while Van Vleet added 11 for Toronto. Anunoby scored 9 while Green finished with 14 points including a double block with Leonard on a Jayson Tatum drive in the closing minutes.

But the night belonged to Kawhi Leonard who delivered a message to the rest of the league. There were plenty of questions surrounding Kawhi entering this season especially since he played just 9 games last season with a nagging quad injury. Leonard also distanced himself from the Spurs while he was recuperating the injury and aside from doubts if he could return to form, some people began questioning his character and attitude.

But since coming over from Toronto, we have seen a different Kawhi Leonard not just on the court but off it as well. Not only does Kawhi look healthy, he looks like he has found a home for himself in Toronto. With all the issues he had with San Antonio, Leonard seems to be fitting nicely with his new teammates and it showed on the court on Friday night against Boston.

Leonard would finish the game with 31 points and 10 rebounds, his second double double in as many games. The Klaw shot 10-25 from the floor, 2-5 from behind the three point arc and went 9-9 from the foul line in 36 minutes of solid playing time. Said Leonard after the game:

"I'm not looking to get back to where I was before," Leonard said. "I'm worried about the now and the player I'm trying to become now and tomorrow."

No question Leonard is healthy and when he is, he is a top five player in the NBA. We saw a glimpse of that on Friday against Boston and the Celtics realized that the Raptors mean business this season. Toronto had a great year last season but with all due respect to DeRozan, the Raptors didn’t have a closer and a go to guy like Kawhi Leonard. Toronto’s always been good but they never had that transcendental star like Vince Carter was. Now they have Kawhi Leonard.

But despite Leonard playing as good and even perhaps better than ever, the Raptors are not taking any chances. Because they opened the season with three games in four nights, Toronto rested Leonard for their Saturday game against the Washington Wizards in Washington. It’s still too early in the season but the Raptors have drawn first blood in the East.