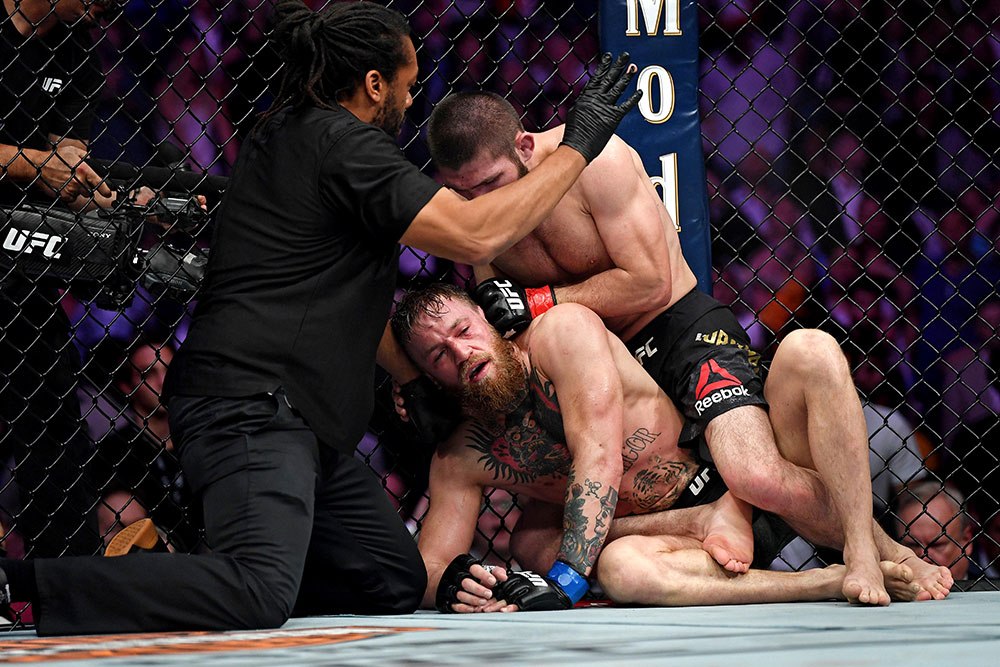 In a brilliant display of grappling and wrestling, the UFC lightweight champion put McGregor on his back three times on Saturday night before finishing off the brash Irishman via rear naked choke in Round 4 at the main event of UFC 229 at the T-Mobile Arena in Las Vegas, Nevada.

It was advertised as a stylistic battle between a striker and grappler. McGregor had the best left hand in the division and owns some of the most dynamic striking in the business. Nurmagomedov is an elite grappler, a former combat sambo world champion who is relentless with his takedowns and vicious with his ground and pound. Whoever would take the fight to where he wanted would win. That was what happened.

One minute into the fight, Nurmagomedov already closed the distance and was able to grab hold of McGregor. After McGregor defended well the initial attempt, Khabib would not be denied in putting McGregor on the ground. McGregor fought back, landing elbows while the jostled for position. Still, Round one went to Khabib who was able to put McGregor on his back early in the fight.

In a shock, Nurmagomedov put McGregor on his butt with a right hand in round two. As the Irishman tried to get back to his feet, Khabib attempted a flying knee and transitioned into a takedown attempt. Once again, McGregor was on his back. Khabib spent most of the round landing ground and pound on McGregor.

In the third, it appeared that Nurmagomedov was slowing down. McGregor stuffed his takedowns and the Irishman was able to pop Khabib with a huge uppercut. McGregor continued to defend the takedowns while scoring with knees and punches of the Dagestani champion.

Entering the championship rounds, McGregor had a small cut near his left eye. Both men were huffing and puffing. But it seemed like Khabib had more gas left in his tank than his opponent. Nurmagomedov used an outside trip to put McGregor on the floor. From there, it was easy. Khabib passed guard, moved to the mount and as McGregor gave up his back, Khabib went for the neck and choked McGregor out.

It was the fourth loss of McGregor’s career and all of his losses have been by submission. McGregor was also choked by Nate Diaz in his most previous MMA loss at UFC 196. For Nurmagomedov, it wasn’t just another win but it was a validation of his claim as the best lightweight in the planet. McGregor may have talked a lot on the mic in the lead up to the fight but Nurmagomedov let his wrestling do the talking on Saturday night. However, Khabib’s brilliant effort went to naught after he started an ugly free for all inside the arena.

All hell broke loose after the fight. After Herb Dean declared him the winner, Nurmagomedov snapped. After trash talking a defeated McGregor, Khabib threw his mouthpiece inside the octagon but in the direction of McGregor’s corner. He then leaped over the fence and attacked the Notorious’ corner, going after McGregor’s training partner Dillon Danis. A brawl ensued between the two and some people.

From out of nowhere, a man was seen leaping inside the octagon and punching Conor McGregor. The man was later identified as Khabib’s teammate Zubaira Tukhugov. Tukhugov spent 2.5 years outside the cage after a USADA doping violation. He had recently just gotten a U.S. visa so he could fight again. For sure, he’s not going to be fighting anytime soon.

More pushing and shoving took place before both camps finally calmed down as security was everywhere to end the madness. Khabib was nowhere to be found after the brawl. He was later escorted back to the octagon as he had not yet been officially declared the winner.

“A lot of bad stuff that shouldn’t have happened,” White said of the brawl. “Khabib jumped over the cage going after one of Conor’s guys, who I guess was talking trash to him, and all hell broke loose. I don’t even know what to say right now. I’m just disgusted and sick over it.”

More confusion happened inside the cage as Nurmagomedov was looking for the lightweight title belt which was supposed to be wrapped around his waist. It turned out the UFC President Dana White decided not to bring the belt out to prevent a riot because as White said, there were so many Irish fans inside the arena.

"I actually didn't allow [Nurmagomedov] to get the belt put on because I knew what was going to happen when we did it was, people were going to throw whatever they had into the Octagon, so let's just get him out of here. ... Sure enough, as soon as they started going through the tunnel, exactly what I knew was gonna happen. I was like, 'We'll be lucky enough just to get him out of here without the belt.'"

There were no post fight octagon interviews and Khabib was escorted by UFC officials and security outside the octagon.

"Where you at, McNuggets, you f---ing piece of shit?" Ferguson said, calling out Conor McGregor for stealing his title bout. "I'm going to kick your ass. If Khabib don't do it, I will. Son of a bitch, I'll give you a proper ass-whoppin' any day."

Unfortunately for Tony, McGregor couldn’t get the job done. Instead, El Cucuy may have booked himself another date with Khabib. Ferguson and Nurmagomedov have been previously booked to fight four times before but in each instance, one had to pull out from the fight because of injury.

The two were first booked to fight at the finale of The Ultimate Fighter 22 in 2015 but two months before that bout, Nurmagomedov pulled out of the fight with a rib injury. They were rescheduled to fight at UFC on Fox 19 the following year but it was Ferguson’s turn to pull out from the fight after suffering an illness that caused fluids and blood to fill his lungs.

The third booking was the closest they got to finally fighting but Khabib pulled out of their UFC 209 fight after he was hospitalized on the day of the weigh-ins because of weight cutting issues. Then earlier this year, the pair was supposed to finally throw down at UFC 223 last April but Ferguson suffered a freak knee injury after he tripped over a media cable while doing a media promotion for the event.

But after Ferguson’s win against Pettis and Nurmagomedov’s victory over McGregor, their paths are set to cross again. A lot of people have called Khabib vs Ferguson as the most cursed fight in UFC history. But each time this pair are separated by injury, they are drawn closer to each other by events. With Conor McGregor now officially out of the equation at lightweight, Khabib vs Ferguson is the best next fight to make.

Will McGregor Ask For A Rematch?

For sure, the main road block to that fight would be Conor McGregor because after the loss, you bet McGregor wants to redeem himself for his legions. Remember when he lost to Nate Diaz at UFC 196? The UFC booked the pair to an immediate rematch at UFC 202. Given that McGregor has recently signed a new contract with the UFC and with some contract renewals from his sponsors, no question Conor wants another crack at Khabib.

But as we saw on Saturday night, Conor McGregor is no match for Khabib Nurmagomedov. Khabib took him down in the opening minute of the fight and kept the fight on the ground for the most part of it. McGregor was always given a chance because every fight starts on the feet but even when it was on the feet, it was Khabib who landed the biggest punch of the night. If they fight again, it’s no longer a question of who is going to win but it’s just going to be how and how long.

Khabib Nurmagomedov beats Conor McGregor all day. McGregor can talk all day about Khabib having a glass jaw. But he never found that jaw in four rounds. You can even make a case that Al Iaquinta fought a better fight against Khabib. Iaquinta isn’t a star like McGregor but he is a balanced fighter. McGregor is a one trick pony and Khabib proved that.

I won’t be surprised if the UFC does give McGregor a rematch. That’s because he is their main business. The UFC’s numbers dropped significantly in the two years McGregor was out. He put them back in business as UFC 229 is a sure fire hit. But after taking a loss, the UFC can’t afford to put McGregor in the sidelines for too long. There are many fights to make for McGregor but him being stubborn proud, he’ll want one more crack at the Eagle.

Adding uncertainty in the lightweight division is Nurmagomedov himself who could very well be penalized by the UFC and the Nevada State Athletic Commission for starting the melee after the fight. A suspension is possible given what transpired after the bout and if that happens, the UFC could end up with another interim title fight involving Ferguson.

If Khabib does get a lengthy suspension after this, then you cannot discount the possibility of Tony Ferguson fighting Conor McGregor for the interim belt with the winner facing Khabib once he is eligible again. No, we’re not saying Khabib is going to be suspended but if that actually happens, it may open the door for a better script for the UFC.

Regardless, the fight we want to see is Khabib vs Ferguson. The champion is unbeaten in 27 fights and Ferguson is on an 11 fight win streak right now. Nobody in the history of the UFC lightweight division has won that many consecutive fights. Khabib has looked unstoppable and the only fighter who may have a chance of beating him is Ferguson. Whether we’ll finally see that fight happen remains to be seen.

Most of us thought that UFC 229 would give clarity to the UFC lightweight division. The winner of the co-main event would emerge as the #1 challenger and would face the winner of the main event. Instead, it has gotten murkier than ever. For the fans it’s not what they want. For Dana White, this kind of controversy is what he loves.