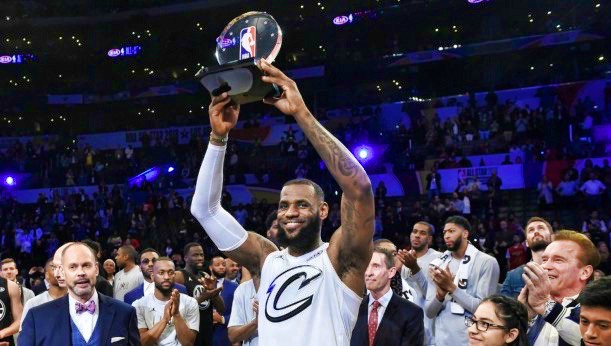 Cleveland Cavaliers’ superstar LeBron James won his third All-Star Game MVP award after leading Team LeBron to a come from behind 148-145 win over Team Steph in the 67th NBA All-Star Game at the Staples Center in Los Angeles, California.

King James scored a game high 29 points, including 4-8 from beyond the three point line. He also tied a game-high 10 rebounds and issued 8 assists, falling two dimes short of recording a triple double. James was the obvious choice for MVP not only because of his impressive statline but he scored the go ahead basket with 34.4 seconds left in the 4th period.

Prior to that, James tied the game 144 all with a three point basket. DeMar DeRozan then split his charities to pave way for James’ heroic layup. With Team LeBron up 146-145, James found a streaking Russell Westbrook for a lay-up that gave Team LeBron a three point cushion.

Down 145-148, Team Steph went for the three but James defended Curry well, forcing the Warriors’ two-time MVP to retreat to the corner only to be met by a double team from Kevin Durant. Curry had no choice but to give the ball up to DeRozan whose shot was both too late and too short.

Help From An Old Friend

But James did not do it alone. He had plenty of help, especially from an old friend named Kyrie Irving. The Boston Celtics point didn’t have an efficient game, scoring just 13 points on 16 shot attempts including just 1-5 from beyond the three point area. But Irving delivered when it mattered most.

With Team LeBron down 133-120, Irving over the shoulder pass after a dribbling exhibition led to a Paul George three pointer. On their next possession, Irving scored on a layup to cut the lead to single digits with 6 minutes to play. Another Irving assist led to a LeBron three point play that cut the deficit further to 131-136. After Team Steph took a 138-133 lead, Irving assisted to Durant then drive home for another layup to cut the lead to just one at 138-137.

Irving scored two crucial layups during their fourth quarter comeback and issued four assists in the final 6:30 of the game. Aside from scoring a total of 13 points, Irving also had 9 assists, 7 rebounds and 1 steal for Team LeBron. Aside from Irving, reigning NBA MVP Russell Westbrook also scored 8 points in the final 3:03 of the game, including the layup which gave Team LeBron a three point lead in the final seconds of the ballgame.

After the game, James said it was ‘phenomenal’ to play with Irving again. James paid tribute to Kyrie’s flashiness, ball handling and ability to shoot. He referred to their one-game stand as a ‘great moment’. But James and Irving weren’t the only former teammates who were in sync on Sunday night.

Russell Westbrook and Kevin Durant also teamed up for Team LeBron. This was the second straight All-Star game where the former Oklahoma City Thunder 1-2 punch played alongside each other following their 2017 break-up. While there were some tense moments in last season’s All-Star game,

Durant’s handoff pass to a cutting Westbrook cut the deficit to 139-140 for Team LeBron. Although Russ would miss the ensuing foul shot off a three point play opportunity, he would say after the game that playing with KD was ‘fun’. Westbrook also added that he and Durant communicate when needed but also said that the rest is history.

“For me to be the captain of the team, Steph [Curry] being the captain of his team, and us doing that, that draft was something that hadn't been done before," James said. "The great thing about our commissioner [Adam Silver], he's absolutely OK with trying something new, to change the format, and it definitely worked out for everybody. It worked out not only for the players, not only for the league, but for our fans, for everybody. It was a great weekend, and we capped it off the right way."

Capping it off the right way meant changing the narrative of the All-Star game. Previous All-Star Games were merely an offensive exhibition of the world’s best basketball talents, but this year’s format coupled with Team LeBron’s desire to put a high level of competitiveness for the NBA All-Star game produced a classic.

This was different. The game was decided on the final play and in that play, it was defense that prevailed over offense. It was symbolic that James and Durant, acknowledged as the Top 2 best basketball players in the world, would double team the opposite team’s captain, Warriors’ two time MVP Stephen Curry. Curry is unquestionably the best three point shooter of this era but against Bron and KD, he was forced to the sideline and give up the ball. That play and the defensive effort by Team LeBron all night long certainly changed the landscape of the NBA All-Star game.

The Night Belonged To The King

But the night belonged to King James who was named as the star of stars and the king of kings. His 6th assists of the game put him 5th in the NBA All-Star Game’s all-time list, passing Oscar Robertson. With that accomplishment, James is now Top 5 all-time in the NBA All-Star game in appearances, points, three pointers and assists.

At age 33, King James was the oldest participant in this year’s All-Star Game. But not only did he win the MVP award, score the most points and came two assists shy of a triple double, James also gave the fans the night’s most acrobatic highlight: a two handed reverse dunk off an alley-oop pass from Russell Westbrook. Said James:

"Listen, I respect the younger guys, and I love them," James said. "They're the next crew, for sure. They've got to keep this thing going. What I take pride in is taking care of my body. ... Making sure I'm available every night and continue to get better and better. I don't really take it as [playing against] a young guy, 'OK, I need to show him that I'm still able to do this. I need to continue to show myself,' you know, because every night I step on the floor, I have to lead my guys or prove to myself that I'm still able to play at a high level. I feel great."

James’ third NBA All-Star Game MVP came 10 years after he won his second. James had a near identical statline of 27 points, 9 rebounds and 8 assists when he led the Eastern Conference All-Star team to a 134-128 victory in New Orleans. James won his first All-Star Game MVP in 2006 in Houston.

The third NBA All-Star Game MVP trophy puts King James in a tie with Michael Jordan, Shaquille O’Neal and Oscar Robertson for 2nd most all-time. Kobe Bryant and Bob Pettit own the record for most NBA All-Star game MVPs with four apiece.

"From my very first All-Star up until now, I just try to get better and better and not only show myself but show my peers and show everybody that I belong. It's always been my fans who voted me in. For 14 straight years, my fans have voted me in as an All-Star starter, and it's been up to me to go out and let them know and show them, 'Listen, I appreciate that, and here's what I'm going to give to you every time you vote me in.'

James is having one of the best seasons of his NBA career. The All-Star Game MVP only adds to the brilliance of his 15th NBA season. Not to say that he wasn’t brilliant before because James has had one remarkable season after another. He’s re-written plenty of NBA history and he continues to assault the record books with his continued greatness.

The only question for James is whether he can lead his Cleveland Cavaliers back to the NBA Finals. Cleveland has faced the Golden State Warriors in the last three NBA Finals. They’ve won just once, losing in 2015 and last June 2017. James has played in the last seven NBA Finals but his team’s current struggles put a question mark to this year.

Cleveland overhauled its roster, in the hopes of salvaging the season. So far, it’s been good for James and his new team. But we know that there is always a honeymoon period. What’s going to be crucial is how they will finish the season in the standings. As far as winning the title is concerned, that’s still a long story as Cleveland will have to go through Boston and Toronto in the East before even thinking about a fourth date with the Dubs or the Rockets.

And as if the pressure to win the title this season isn’t enough, James is also likely headed to free agency as he can opt out of his current contract after this season. James has not committed to returning to Cleveland and is rumored to be willing to entertain offers from other teams once he becomes contractually free, Los Angeles included.

Before the game, James addressed the Staples Center crowd and called Los Angeles ‘a great city’. He also said after the game that L.A. is built for the stars, entertainment, the bright lights and cameras. This isn’t the first time that James has talked about L.A. with affection. He once casually referred to Los Angeles as home in a tweet.

Whether James is leaving for Los Angeles or elsewhere after this season remains a big question. For now though, the King is focused on getting his Cavs to the NBA Finals once again and give them another shot at winning their second NBA championship. Knowing how seriously he took the NBA All-Star Game, you bet he’s laser focused to do everything in his power to achieve that goal, whether he’s successful or not.