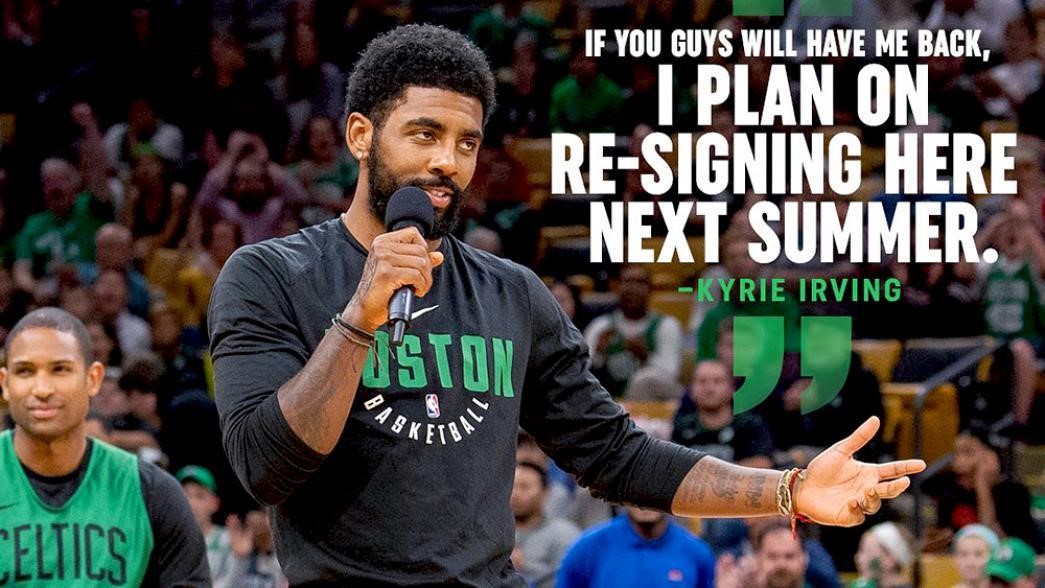 The Boston Celtics’ annual Fan Fest has traditionally been a low-key yearly event where Celtics’ players participate in fun events like a three point shootout or skills challenge. Yet on Thursday, Kyrie Irving made it one of the most important days of the Celtics’ year as he announced his intention to re-sign with the Celtics.

“If you guys will have me back, I plan on re-signing here.” - @KyrieIrving pic.twitter.com/0wDLzuv5WL

“If you guys will have me back, I plan of re-signing here next next year.”

That’s the most definitive statement that Irving has made so far about his upcoming free agency. Sure, there have been reports and indications that Irving wants to stay in Boston but by far, Thursday’s declaration was the most categorical statement he’s given regarding his future. 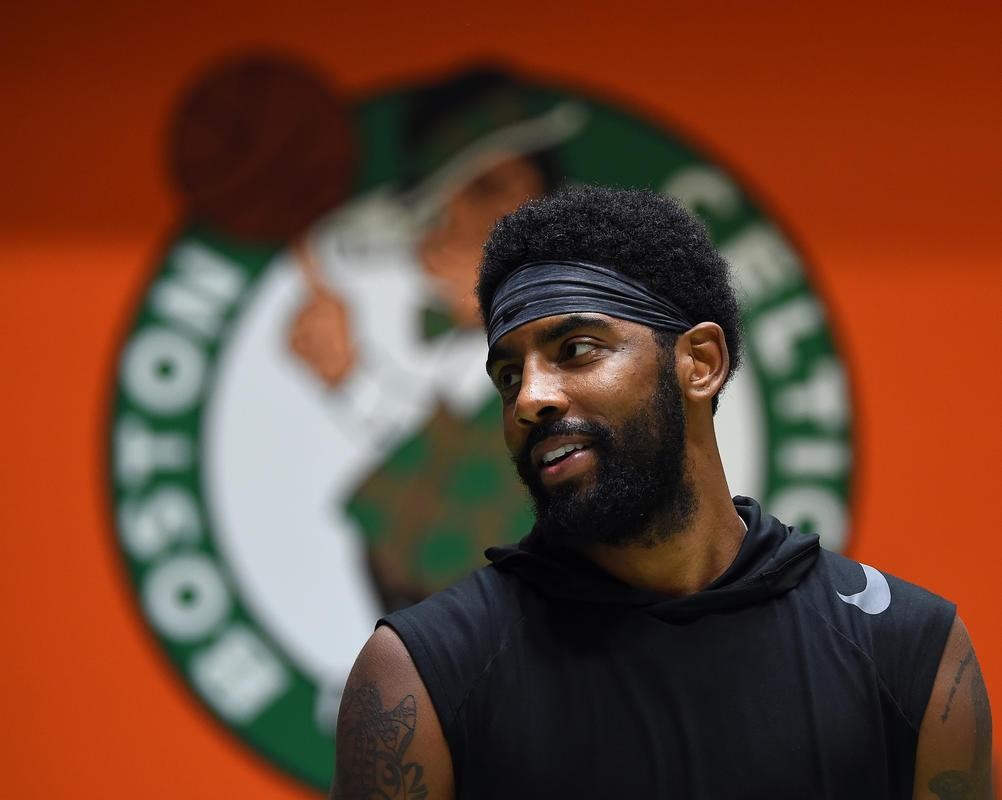 Months back, there were rumors that Irving was considering playing for other teams next season. One talked about him deciding to play close to home and signing for the New York Knicks. As that story went, Irving is supposedly planning to team up with Team USA teammate Jimmy Butler in New York. The disgruntled Butler has already asked to be traded from the Minnesota Timberwolves and he was reported to have “liked” a social media post that talked about him and Irving playing for the Knicks. But if, for a little bit, the Celtics were worried about losing Kyrie to the Knicks, or to any other team for that matter, the stakes have now changed. Nine months before the 2019 free agency, the Boston Celtics may have already have their top prize in the bag.

No question Irving will be a target of most teams seeking top tier free agents next summer. Irving is one of the most gifted offensive players the game has ever seen. But his declaration to re-sign with the Celtics means that it’s game, set and match for all the other probable suitors.

The Celtics landed Irving two summers ago after he demanded a trade from the Cleveland Cavaliers. Boston traded then all-star point guard Isaiah Thomas, Jae Crowder, Ante Zizic and a future first round pick just to get their hands on one of the most dazzling ball handlers the game has ever seen. Boston was also forced to trade guard Avery Bradley to help make room for Irving plus another all-star free agent signee in Gordon Hayward.

The addition of Hayward and Irving last summer turned Boston into an immediate contender. But before we found out how good they were, the Celtics lost Hayward to a season ending ankle injury five minutes into the 2017-18 season. Without Hayward, Irving took the baton and led the Celtics to the best record in the NBA in the early part of the season. But in the middle of an MVP-type season, Irving was slowed down by an old injury and was later shut down to heal his knee. Irving underwent successful surgery in April and his Celtics went all the way to the Eastern Conference Finals without their two all-star signees. Boston was on the verge of making the NBA Finals as they took a 3-2 lead before LeBron James and the Cleveland Cavaliers held them off. Despite losing, there was plenty to be optimistic about in Boston.

Without Hayward and Irving, everybody on the team stepped up. From veteran Al Horford to young guns like Jayson Tatum, Jaylen Brown and Terry Rozier and even role players like Aron Baynes, every player on the Celtics roster played a notch higher during the playoffs. With the much needed playoff experience gained plus the return of Hayward and Irving this season, much has been expected from the Celtics. However, the possibility of losing Irving in free agency next year has always lingered. Not anymore.

Focusing On The Task At Hand 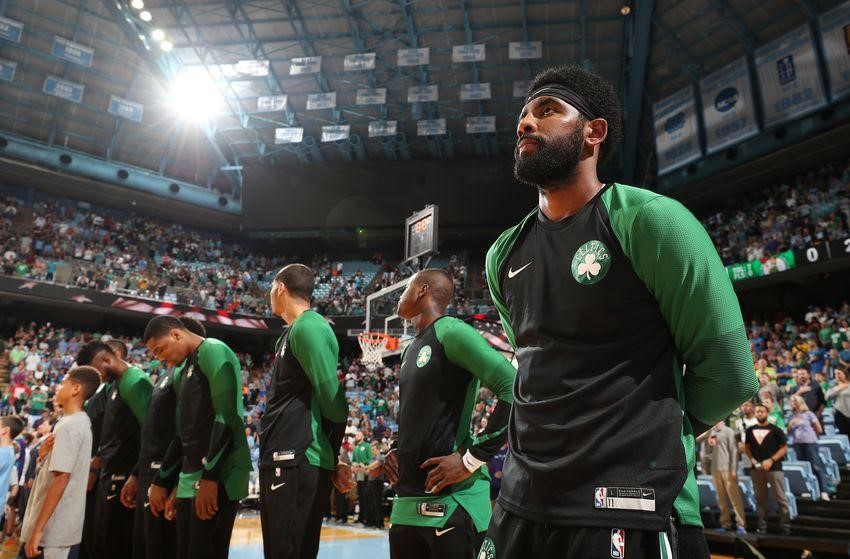 With Irving verbally committing to stay, the Celtics can now focus on the task at hand and that is winning the NBA championship. The Golden State Warriors are still favored to win the Larry O’Brien trophy a third consecutive season but the Celtics and the Houston Rockets have been touted as their chief challengers this coming season. With the way the Celtics played without Kyrie and Gordon and the return of the two this season, no question the Celtics will be a handful to everybody, including the Warriors themselves.

Although Hayward has looked rusty in preseason play and he has admitted that his recovery may be slower than he expected, the former Utah Jazz forward has looked completely healthy and getting his lift, his legs and his shots may only be a matter of time. As for Irving, he’s looked spectacular so far for the Celtics.

After scoring just 9 points in his preseason debut, Irving exploded for 20 points, 3 rebounds, 4 assists, 1 block and 1 steal in 29 minutes of appearance against the Hornets last September 30th. As usual, Irving dazzled the crowd with his ball handling wizardry and amazed them with his shot making trickery. By the looks of it, Irving is ready for the regular season grind.

As for the Celtics, they are the favorites to win the East this year along with the Toronto Raptors and Philadelphia 76ers. The Raptors added former Defensive Player of the Year and NBA Finals MVP Kawhi Leonard during an offseason trade. Meanwhile, the Sixers are coming off their first playoff appearance since 2012 and with the duo of Joel Embiid and Ben Simmons only becoming better, they are also expected to make a run in the Eastern Conference, whose landscape changed after LeBron James left Cleveland for the bright lights of Los Angeles.
Boston has also been linked to New Orleans Pelicans big man Anthony Davis for quite some time now. Although Davis recently said that he wants to help the Pelicans organization, there are rumors that he may be doing otherwise especially since he changed agents last month.

According to a new report from The Athletic, Irving recently spoke to Davis about the possibility of joining forces in Boston. Per The Athletic:

“Several league sources have said they believe Davis could end up either with the Celtics or Lakers if the Pelicans were to move him. If he landed with the Celtics, he'd be reunited with former Team USA teammate Irving. The two have already spoken about what it would be like to play together in Boston, according to a league source.”

No question, Davis would make Boston a more formidable contender. But that story is still far from even being close to reality and there are plenty of hurdles to overcome in order to bring that to fruition. For one, Davis must not sign an extension with the Pelicans. Then the Celtics will have to fight off other teams who will surely have equally better offers for Davis in a trade package. The Celtics will also have to give up significant players from their current lineup in order to give the Pelicans a good offer. With the way the Celtics were humming as a team during the playoffs, maybe it would be better if they kept this current lineup and test how far it could go.

Brad Stevens has done a masterful job with his positionless basketball ideology. He’s transformed Boston into a well-oiled machine that nearly toppled LeBron’s stranglehold of the Eastern Conference even while playing without their two all-star players. With the confidence that guys like Terry Rozier, Jayson Tatum and Jaylen Brown played with during the 2018 playoffs, no question Boston has the tools to go all the way even without Anthony Davis.

Adding Anthony Davis would be fantastic for the Celtics. But that’s looking too far ahead and that may not even be necessary. Kyrie Irving has just verbally agreed to stay in Boston and that’s a huge gorilla off Danny Ainge’s back. Ainge, Stevens and the rest of the front office can now breathe a sigh of relief and get ready for war knowing that their best player loves where he is and wants to stay in town.