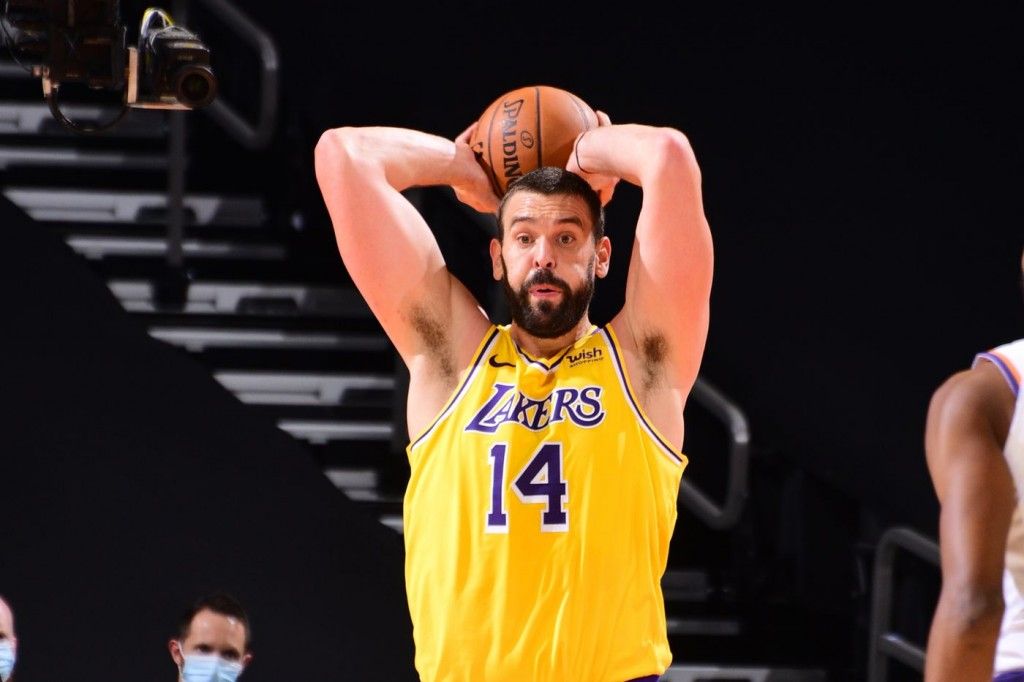 Lakers’ Marc Gasol demoted to a role off the bench

With the Los Angeles Lakers bringing in a new vital piece to their puzzle in the form of former All-Star big man Andre Drummond, someone on the team had to sacrifice their playing time. That turned out to be veteran big man Marc Gasol, who the Lakers signed last offseason to shore up their depleted frontcourt.

Gasol, who won his first NBA championship when he and the Toronto Raptors defeated the Golden State Warriors in 2019, was brought in to the Lakers’ camp following the departures of Dwight Howard and JaVale McGee. Both Howard and McGee were vital cogs in the Lakers’ successful championship run last year, especially with the rim protection and the intangibles that they provided on both ends of the floor.

With Gasol in place, the Spaniard big man checks everything that the Lakers need out of a defensive-minded center. He will not protect the rim like how Howard and McGee would do, but he has impeccable defensive instincts that he uses to position himself correctly on his team’s defensive schemes. On top of that, he can also make plays on the offensive end of the floor.

Gasol’s production has drastically dipped this season, but he has bounced back in the last few games. In the Lakers’ recent win against the Raptors, Gasol poured in an all-around stat line of 13 points, 9 rebounds, 5 assists and 4 blocks. With both Drummond and Anthony Davis sitting out due to respective injuries, it is becoming apparent that Gasol is grabbing the opportunity to show exactly what he can do on both ends of the floor.

As per Dave McMenamin, Gasol reiterated that he will always stay ready in contributing to the team’s cause, even if it is as a starter or a role player off the bench.

"I'll stay ready. I'm going to tell you this: I'm fully committed to the team. I'll stay ready when my number is called. I understand we have to get Andre acclimated to what we're trying to do. We have to get back our two main guys -- Bron [LeBron James] and AD [Anthony Davis] whenever they come back -- and they have to get that group going and get some chemistry going with the first unit for them. I'll be ready no matter what happens. No matter if it's five minutes, 10 minutes, if it's whatever position. If it's some nights, I might not play. But I'll stay ready, no matter what. I made that commitment.

It's been a process for me to reassess this situation a little bit, but like I said, I'm fully committed to this team. So, whatever is thrown at me, I'll be ready. You know, I can make a couple shots. I can play in the post. I can pass the ball. I can do a couple things quite well every now and then."

Gasol, who is now 36 years of age, is the younger brother of Pau Gasol, who teamed up with the late great Kobe Bryant in bringing two consecutive championships to the Lakers in 2009 and in 2010. The younger Gasol was selected as the 48thpick in the 2007 NBA Draft, but did not play in the league right away as he spent that year playing in Spain.

In 2008, he was awarded with the ACB Most Valuable Player plum. After that, he eventually took his talents to the NBA to play for the Memphis Grizzlies, where he spent ten productive seasons. Gasol was named to the All-Star team three times, and was named as the Defensive Player of the Year during the 2012-13 season.

Gasol would achieve tons of collective success with the Grizzlies, partnering with long-tenured point guard Mike Conley in steering the team to consecutive All-Star appearances. However, the Grizzlies were not able to snag a championship as a team, and they entered a rebuilding mode in the middle of the 2018-19 season. Gasol found himself being traded to the Raptors, where he helped the franchise win their first ever NBA championship in 2019.

Now that he is in a Lakers uniform, there is no doubt that he is here to bring in a much-needed veteran experience and leadership to this team. May that be on a starting position or a role off the bench, Lakers head coach Frank Vogel says that Gasol will be of big value for them as the season approaches its stretch run towards the more important games in the playoffs. (as per Christian Rivas of SB Nation’s Silver Screen and Roll)

“That’s still going to be the mindset every night is for him to be available and ready,” Vogel said on Friday. “He’s one of our better players, so we’re not going to have a mindset that he’s definitely not going to get in there; if we need him to play we’re going to throw him in there, and we certainly needed that with the Drummond injury the other night.

I don’t really see this as a situation where he’s going to fall out of the rotation long-term, and he knows that,” Vogel said. “Even if there’s nights where he may not play, he’s going to stay ready like he did the other night. He came in, and that’s hard to do is sit over there for three quarters without getting in, and then take your warm-ups off, get loose and go in and play as well as he did. That’s extremely hard to do, and it’s just a credit to his professionalism and what kind of player he is.”

In the 41 games that he played for the Lakers this season, Gasol has started in 40 nights. However, it is also the first time in his career that he is not eclipsing 20 minutes in playing time each game. Gasol is only logging in 19.6 minutes per game this season and as a result, his production on the court has also decreased.

So far, the three-time All-Star big man is only putting up a stat line of 4.9 points, 4.0 rebounds, 2.0 assists, 0.5 steals and 1.2 blocks per contest. Still, there is no doubt that Gasol can still be effective if he is fielded in for a significant amount of playing time, especially with all the injuries that this Lakers squad is going through.

It is also an excellent sign for the Lakers that the veteran big man has bought in to whatever role the coaching staff has in store for him. As per Eric D. Williams of Sports Illustrated, Gasol reiterated that he knows that roles quickly change in the NBA, and that it is up to him if he can immediately adapt to these changes.

“Things can change quickly in the NBA, just as they have changed for me. But I’m committed to this team. It’s a hard pill to swallow because I know I’m going to be out of the lineup at some point, and it’s never easy on a player. As a basketball player, you always want to play -- you want to contribute, especially when you made that commitment for that reason. But we’ll see.

I think there’s an asterisk to that. I think there’s an ‘if’; ‘if’ they need you, and it’s a big ‘if.’ You’re not Plan A right now. You’re Plan C or D. You have to accept it because it’s your job and that’s what you signed up to do. But it’s never easy to accept that, especially when you are asked if you’ve done something wrong and you try to do everything for the team. Obviously, I don’t care much about my stats, the shots I get or the rebounds I get. I try to box my guy out, make the next play and help   everyone out. So, it’s not easy, but it’s life. You have to adapt. Either you take it as a challenge, or you move on.”

After their recent morale-boosting victory against the Raptors, the Lakers are set on finishing the rest of their seven-game road trip with tough contests against Jimmy Butler and the Miami Heat, Kevin Durant and the Brooklyn Nets, Julius Randle and the New York Knicks, and Terry Rozier and the Charlotte Hornets.

It is also worth noting that the Lakers are yet to bring back their injured key cogs like LeBron James, Anthony Davis, Andre Drummond and Jared Dudley.