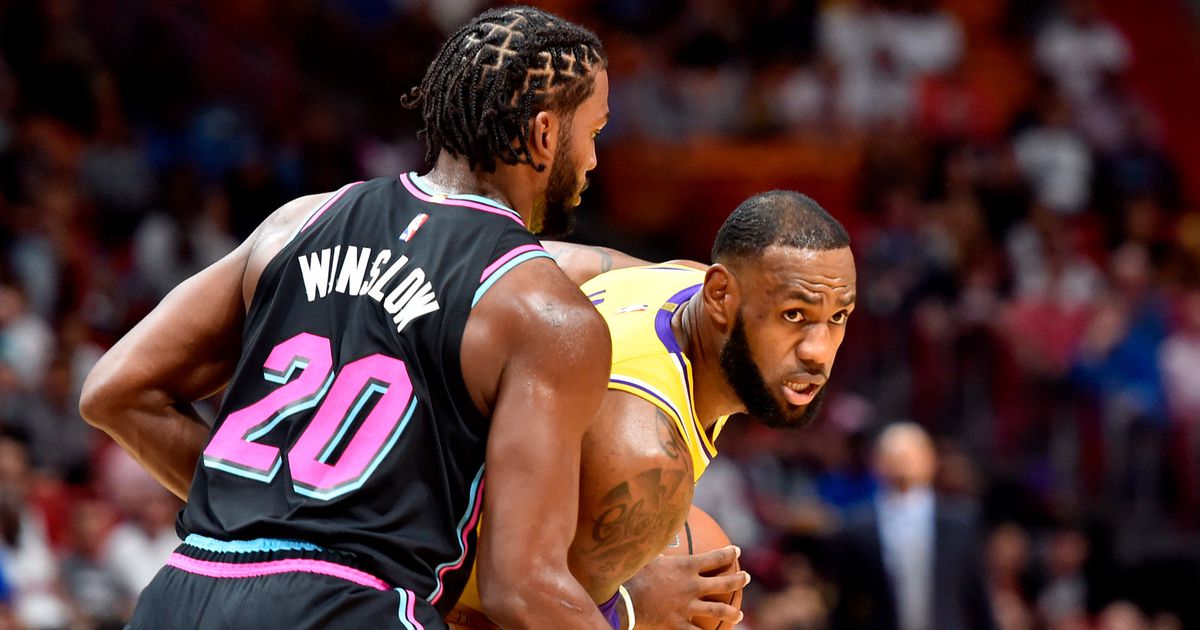 LeBron Drop 51 in First Game As Laker in Miami

LeBron James added another chapter in his ever growing legacy with an incredible 51 point game against his former team the Miami Heat on Sunday.

James’ 51 point night came after his Lakers had a disappearing act in Orlando the day before. Los Angeles had climbed to 8-6 on the season but lost 117-130 to the Magic on Saturday night. James gave his team a big bounce back win with a 113-97 victory over the Heat at the American Airlines Arena in what stands as his first win in Miami since leaving South Beach in 2014. Heading to Sunday, James had a career record of 5-13 at the American Airlines Arena when playing against the Heat. His last win there prior to Sunday was on January 25, 2010 and entered the game on a four-game losing streak. But with the Heat probably at their weakest in years, King James took advantage and turned in a royal performance.

"I felt pretty good. I felt pretty good," James said, playing on the second night of a back-to-back after mustering just 22 points on 8-for-19 shooting in a loss to the Magic on Saturday. "I think we were all kind of shell-shocked in Orlando from that cross-country flight, getting in late to Orlando and just having the time difference. ... But we was able to get some good rest last night and feel pretty good about today's game."

James didn’t waste any time as he dropped 19 points on 8-10 shooting in the opening quarter. By then we already knew that something special was going to happen. James became the fifth player in NBA history to score at least 50 points with three different NBA teams. He joins the ranks of Jamal Crawford, Bernard King, Moses Malone and Wilt Chamberlain on that elite list.

"I've played for three very, very historic franchises in the time that I played," James said. "Obviously, in Miami we did some historical things. In Cleveland we was able to do some historical [things]. And obviously the Lakers [name] speaks for itself, what they've been able to do. And so, my teammates, my coaching staff, they just put that trust in me to go out and make plays, and I just try to be as efficient as possible when I'm on the floor and make things happen."

James’ 12th 50-point game of his career also moved him to sixth place in the list of player with the most 50 point games in NBA history, breaking a tie with Allen Iverson. It’s interesting to note that all but one of his 50 point games have come while playing on the road. James’ 51 points also ties Vince Carter for the most points scored by one player against the Heat. The legendary Michael Jordan’s regular season career high against Miami was only 50 points. James also becomes only the third player in NBA history to have multiple 40 point games during his 16th NBA season. Only Kobe Bryant and Dirk Nowitzki have ever achieved that feat. 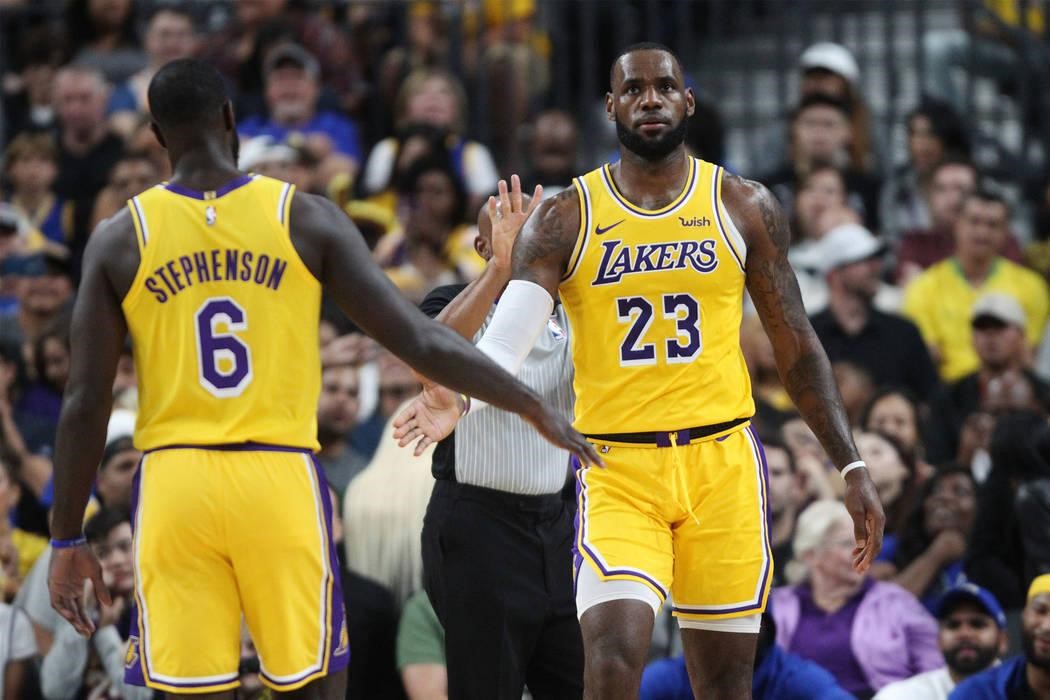 James was at 48 points with less than a minute left to play but then he sank a 32 footer to up his total to 51. While going back, he pointed to teammate Lance Stephenson at the bench after making the three pointer. James talked about that after the game:

So while it was James who scored 51, credit also goes to Lance Stephenson- the James whisperer, for challenging the King to finish the game with flare. Hopefully, the Lakers can challenge each other to play better interior defense so that they will be more consistent with winning games. That’s another story though. Sunday is about the King returning to his former kingdom with 51 points.

"I spent 33 years of my life on the East Coast, so going to the West Coast, everything changes. Even though it is just three hours, everything has changed for me drastically," James said, explaining how the move affected his game. "When you live on the east side of the country for so long, I think for me, it's taken me a little while to get adjusted, with my game, moving, the family, everything. We are all figuring things out."

King James struggled to shoot the three ball at 27.3% ( 12-44 ) last month. He’s been shooting remarkably well this month at 26-52 or 50%. James made 6 out of 8 three pointers against the Heat on Sunday with his final three pointer of the game giving him 51 on the night.

But James’ 51 point night isn’t the only mammoth individual scoring performance of the current season. In fact, it is already the 6th 50 plus point game with barely just one month gone by during the NBA’s 2018-19 season. Yes, and this season’s 50 point games are more than just ordinary 50 point games. Each has been pretty special in their own way.

Here are the other 50+ performances this season, arranged in chronological order:

After missing his rookie season due to injury, Blake Griffin arrived in the NBA with flare. He would become one of the league’s most exciting players and at the same time one of it’s most lethal scorers. Griffin made 5 straight trips to the All-Star game before injuries slowed him down year after year. Finally, the Los Angeles Clippers traded Griffin to the Detroit Pistons last season and it seemed that at 29, his days as an elite player would be over.

But in his third game of the 2018-19 NBA season, Griffin scored a career high 50 points as the Pistons beat the highly touted Philadelphia 76ers 133-132 in overtime. Griffin scored the winning free throw as he made a layup and got fouled with two seconds left in the overtime period. Aside from a career high 50 points, Griffin also made a career best 5 three pointers and attempted a personal best 10 three pointers in that game. And yes, Griffin owns the distinction of being this season’s first 50 point scorer.

Scoring 50 points is nothing new to Stephen Curry. With his shooting touch, you bet he can drop 50 more times than anybody can. One day after Blake Griffin tallied the first 50-point game of the 2018-19 NBA season, Curry topped him with a 51 point effort in a Golden State win over the Washington Wizards. The Warriors’ two time MVP shot 15-24 from the floor, 11-16 from behind the three point arc and 10-10 from the free throw line. And yes, he didn’t play the entire fourth quarter because the game was way out of hand already,

But 51 isn’t Steph’s career high. The son of Dell Curry scored a personal best 54 points against the New York Knicks on 2/27/13 in the game that stands as the one that announced his arrival as the next big thing in the league. That Knicks game was Steph’s breakout game and no other 50 point game is going to top that. However, his 51 point effort against the Wizards last month tied a career high at the Oracle Arena. His 31 points in the first half marked the 9th time in his career where he’s scored at least 30 points in one half. Only James Harden has more 30 point halves with 14. He also moved to 5th in the NBA’s All-time three point list after the game.

Stephen Curry and Klay Thompson aren’t called the Splash Brothers for nothing. Less than a week after Splash Brother Steph scored 51 points in three quarters against the Wizards, Klay Thompson poured in 52 points in 27 minutes against the Chicago Bulls in a 149-124 win by the defending champions. You got that right folks, 27 minutes of action. Now doesn’t that sound like an NBA 2K game or something? Not only was Thompson’s 52 points in 27 minutes impressive. He also set records along the way.

Klay made 14 three pointers to set a new NBA record. In the first half alone, Thompson made 10-14 three pointers, with the 10 makes tying Chandler Parsons’ NBA record. He continued to shoot four more to break the record set by, who else, Stephen Curry. Had Steve Kerr played him the rest of the way, God knows how many he could have made that day. Golden State also made an NBA record 17 three pointers in the first half of that game and their 92 first half points was the second most in NBA history. And yes, don’t forget that Thompson was 5-36 from the three point territory before that game. Talk about breaking out of a shooting slump.

Derrick Rose was supposed to be the Bulls’ messiah after Michael Jordan retired. And during the 2011 season, he showed that he was capable of doing so. Rose won the NBA’s 2011 MVP, becoming the youngest played in NBA history to win the award. He also led the Bulls to their first 60 win season since the Air Jordan era. But then Rose suffered one knee injury after another and he missed more game than he played. Soon, he found himself being traded to the Knicks. He signed with the Cavs last season, was traded again and waived. But former Bulls head coach Tom Thibodeau, who now calls the shots for the Minnesota Timberwolves, took a chance on the former MVP and now it seems to be paying off.

After playing a significant role in the Wolves’ playoff campaign last season, the team brought back Rose this season. On Halloween 2018, Derrick Rose turned back the hands of time and delivered a vintage performance that shocked ( in a good way ) the entire NBA community. D-Rose dropped 50 points on the Utah Jazz in the most meaningful way possible. Rose made the go ahead basket with 30 seconds left and then sealed the win with two free throws with 13.8 ticks to go. And yes, he blocked the potential game tying basket on Utah’s final play. Vintage D-Rose? Impressive after four knee surgeries that would have ended somebody else’s career. Probably the most nostalgic 50 point game of the season, so far.

Kemba Walker has always been one of the high scoring guards in the NBA. In fact, he’s the only player 6-2 or shorter this season to average at least 20 points per game. Moving higher, Walker’s current 28.7 points per game scoring average ranks only second to Stephen Curry for players 6-3 shorter. That means Walker averages more points per game than the likes of Russell Westbrook, Damian Lillard,Kyrie Irving and even Donovan Mitchell. Really? Well, Kemba just proved how great a scorer he is on 11/17/18.

Forget the fact that Jimmy Butler drained the game winning three pointer to enable the Sixers escape with a win. Kemba Walker dropped a career high 60 points against the Sixers on November 17th. Walker scored 58 points on 20-29 shooting at the end of regulation, giving him the most points by anybody this season. In overtime, he added to more to score 60 for the first time in his NBA career. Walker’s 60 is also the new franchise best for Michael Jordan’s Hornets. He is also only the 2nd played 6-1 or below to score 50, the other is Allen Iverson. Walker is also the 2nd player after Wilt Chamberlain to drop at least 60 on the Sixers. That’s just wow!