Lebron James and Dwyane Wade are two of the greatest basketball players of this generation. Not only that, the two share a lot in common and are good friends off the court.

James and Wade were drafted on the same year, with King James going #1 overall in 2003 and Wade going 5th. They spent the first seven seasons of their NBA careers playing as Eastern Conference rivals. In 2010, James joined Wade in Miami and the two would play in four straight NBA Finals, winning twice. LeBron left Miami and returned to Cleveland and last season, Wade joined James there for half a season. The Cavs traded Wade back to Miami and Wade signed last summer for what he called as his “Last Dance”. James meanwhile, left Cleveland for the bright lights of Los Angeles, making the two of them rivals again.

James returned to Miami early this season and poured in 50 points for a Lakers win, setting up one final duel between these two great basketball players on Monday night at the Staples Center. Interestingly, James and Wade had played each other a total of 30 times prior to Monday and their one-on-one record was 15-15. That meant that the winner of the game between the Heat and the Lakers on December 11th would take home the bragging rights.

The game went down the wire and down to the final play. With the Lakers up 108-105, LeBron James switched to Dwyane Wade, forcing the latter to take an off balanced three point basket that missed the mark and preserved the Lakers victory.

"Sixteen-fifteen!" James said with a smile after the game "Whoo! I got some bragging rights ... that I will not use."

Prior to the final play, James was at the line taking two free throws with the Lakers up by just one point. After he made his first foul shot, Wade approached him and said:

“Bro, just miss it so I can shoot the game-winner. Me and you. One on one. Just let me shoot it and go for it.”

LeBron James didn’t miss but the two of them still got their “me and you” one on one moment in the final play. It just wasn’t for the game. The best the Heat could do was tie the game and send it to overtime. However, King James made sure that he had the last say in their 16 year friendship/rivalry. When all was said and done, the two hugged each other and exchanged jerseys, a thing that Wade has done with the opposing team’s star player since this season began. But it wasn’t just jerseys that they exchanged. The two swapped compliments. Said Wade:

"He knew my move at the end that stopped me from getting to my shot," Wade said. "That's how well we know each other, man. Just two competitors who enjoy the game of basketball, who love each other and love competing. So I'm glad that in my 16 years that we were on the court together, we was in this game, we've made a big impact on and off the court."

"I knew at some point after the game it was going to hit me that this would be the last time we was competing against each other, and it hit me right away once the buzzer sound," Wade said. "And we got an opportunity on the court just to look at each other and be like, 'Man, this has been fun, this has been one helluva ride,' and we've enjoyed it together." 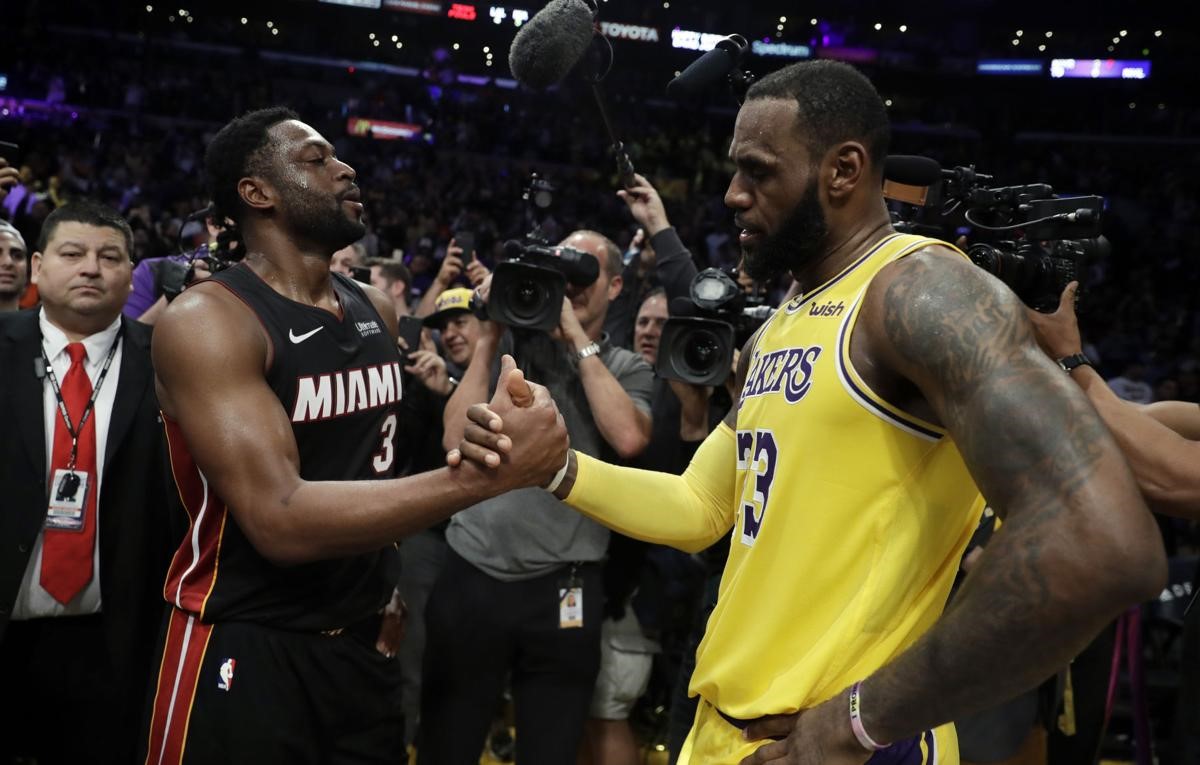 Four years together in Miami, 46 games together in Cleveland, Four trips to the NBA Finals, two NBA title rings and twice teammates on the Olympic team and forever Banana Boat brothers. Before playing together though, James was a two-time MVP who never won a title in Cleveland. Wade was already a champion when he welcomed Bron with open arms in South Beach. James recalls:

"I came to a point where I felt like I needed more with my career, I needed to be with guys that I could see eye to eye and try to get to a point in my career of what I sought out to do and that's to win at the highest level," James said. "So for me to go to Miami and for him to open the door to that city, open the door to that franchise and then to eventually give me the keys to the franchise, give me the keys to the city, it just shows you how selfless he is and how much more of a person he is than just a basketball player. And then, I mean it goes without saying, what we were able to accomplish on the floor. It was instant chemistry. There's no way we were going to be able to fail. We lost two championships, but we didn't fail. There was no way we were going to fail because our chemistry goes beyond just basketball."

James gave credit to Wade not just for pushing him during the first seven seasons of their NBA careers when they were rivals but also for helping him build his resume. Said James to ESPN after the game:

"Obviously, without D-Wade in my career, I wouldn't be sitting here with this resume that I have. Individually I think I would still be doing my thing individually but as far as me accomplishing the team goals that truly mean most to me? Twenty-seven wins in a row. Four straight Finals. Two back-to-back championships. It goes without saying. I wouldn't be able to accomplish it without him."

Sophomore Kyle Kuzma scored 33 points to lead the Lakers while Justise Winslow scored a career high 28 points with six three pointers for the Heat. James and Wade missed big shots in the end game and it wasn’t the kind of duel that we expected. But James finished the game with 28 points while Wade scored 15 in the second half. When the dust settled though, the stat that mattered was 16-15, LeBron James beat Dwyane Wade by just one game in their career head to head matchup. And it was fitting that it came down to the final one, during Wade’s Last Dance, that the winner was declared. It was King James who came up with the win. But he may have never been the player he is today without Dwyane Wade pushing him as rival, teammate and friend for the last 15 years.