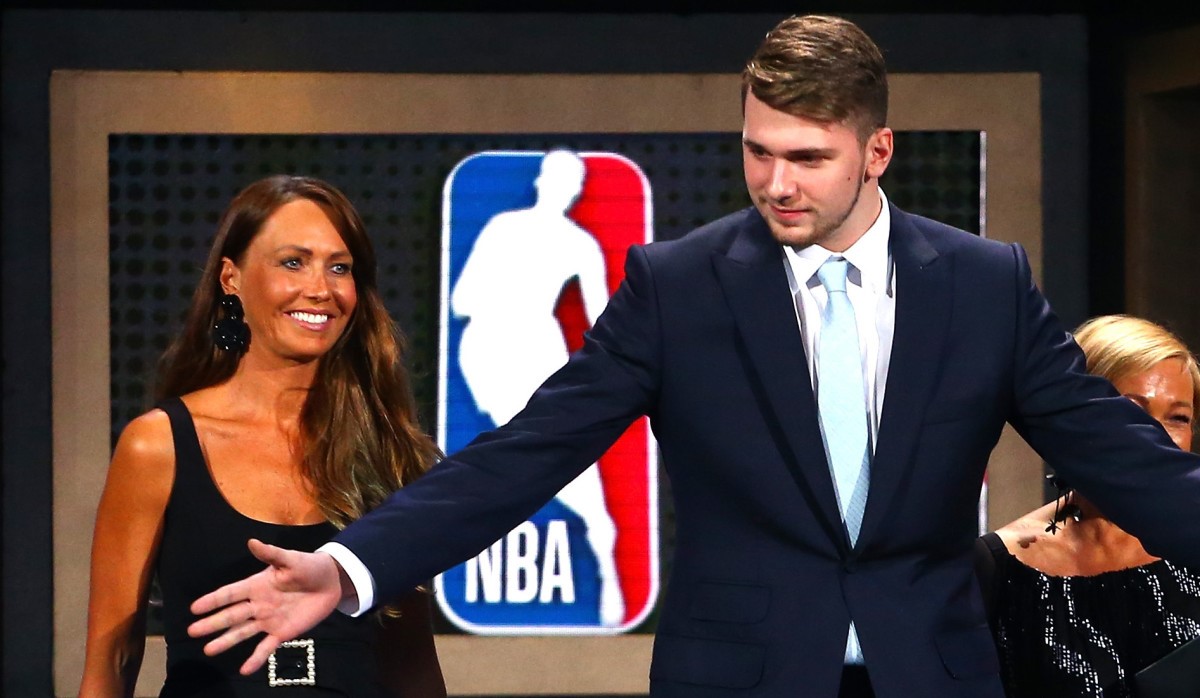 The 3rd pick of the 2018 NBA Draft got traded within minutes to the Dallas Mavericks. But that didn’t make the headlines. His hot mother did.

The Mavs picked up Luka Doncic and his mom....The draft is over, they won already pic.twitter.com/1a6tws7WxO

Mirjam is Luka’s biggest fan. She’s almost present in every game he plays. You can’t blame these two for being almost inseparable. That’s because Mirjam raised Luka by himself after she and his father Sasa split.

Luka’s father Sasa is a basketball coach. The couple filed for divorce in 2008. According to SLAM Luka’s mom was a former hurdler and dancer while his dad played basketball in Europe. Aside from being involved in sports, Mirjam was also a former model and now owns a beauty shop in Real Madrid. Mirjam moved to Spain to be with Luka as the latter played professional basketball for Real Madrid. She considers Luka’s move to Spain at the age of 13 as the ‘toughest decision she had to make’. But their sacrifices have paid off.

Luka was picked 3rd overall in the 2018 NBA draft by the Atlanta Hawks. Just minutes later, he was traded to the Dallas Mavericks in exchange for Trae Young and in a decision the Hawks may regret soon. As for Mirjam, she caught the attention of the cameras when Luka’s name was called. Some even though she was Luka’s girlfriend.

Even the Warriors’ Andre Iguodala couldn’t hide his appreciation for Doncic’s hot mom that he gave her a Twitter shoutout:

Iggy dear, decent may be an understatement. Just take a look at more pics of Mirjam Poterbin: 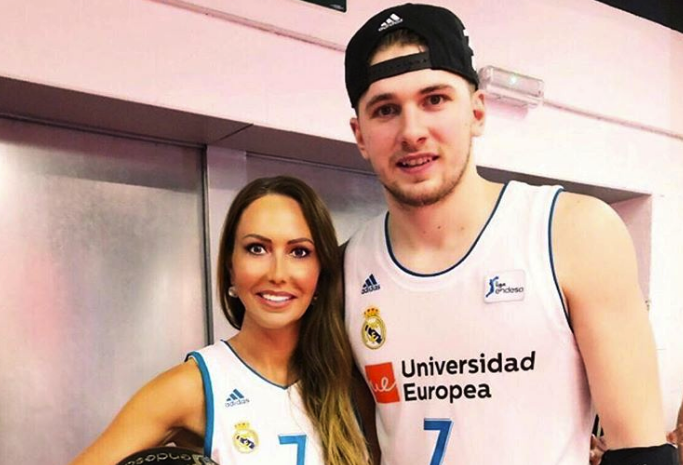 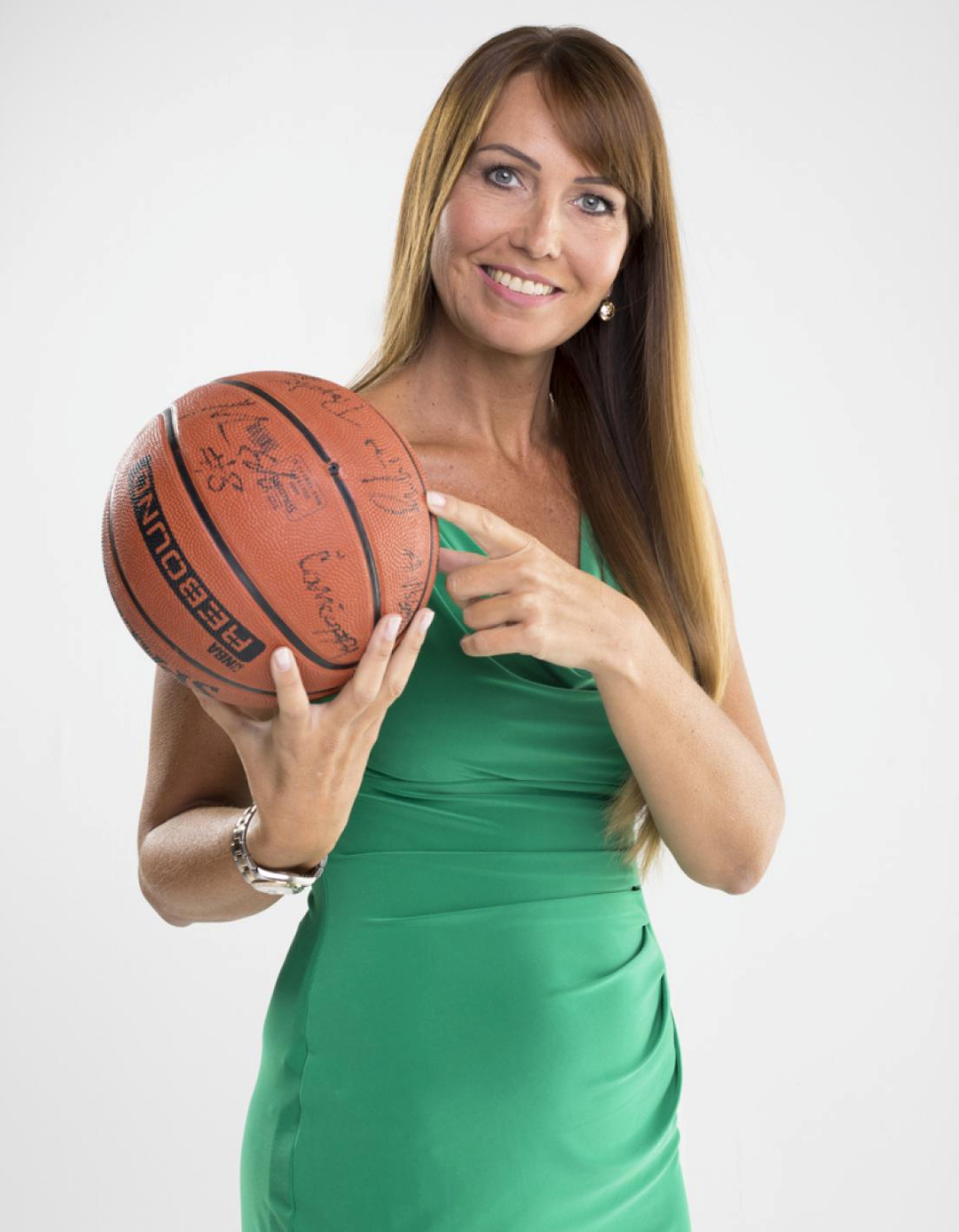 We can fill up an entire page with her images and you still won’t get enough of her. For more of Mirjam Poterbin, you can just check out her Instagram account because she is active there.

Some experts say the Dallas Mavericks got short changed because they traded a future first round pick along with Trae Young just to get Luka Doncic. No they were wrong. In fact, Luka may have been just a filler for that trade. Mark Cuban and the Mavs landed a gem in Mirjam Poterbin. No doubt about that. They got the finest and the hottest NBA player mom today.

Here are some of the hottest NBA player moms we’ve seen in recent years. Check them out: 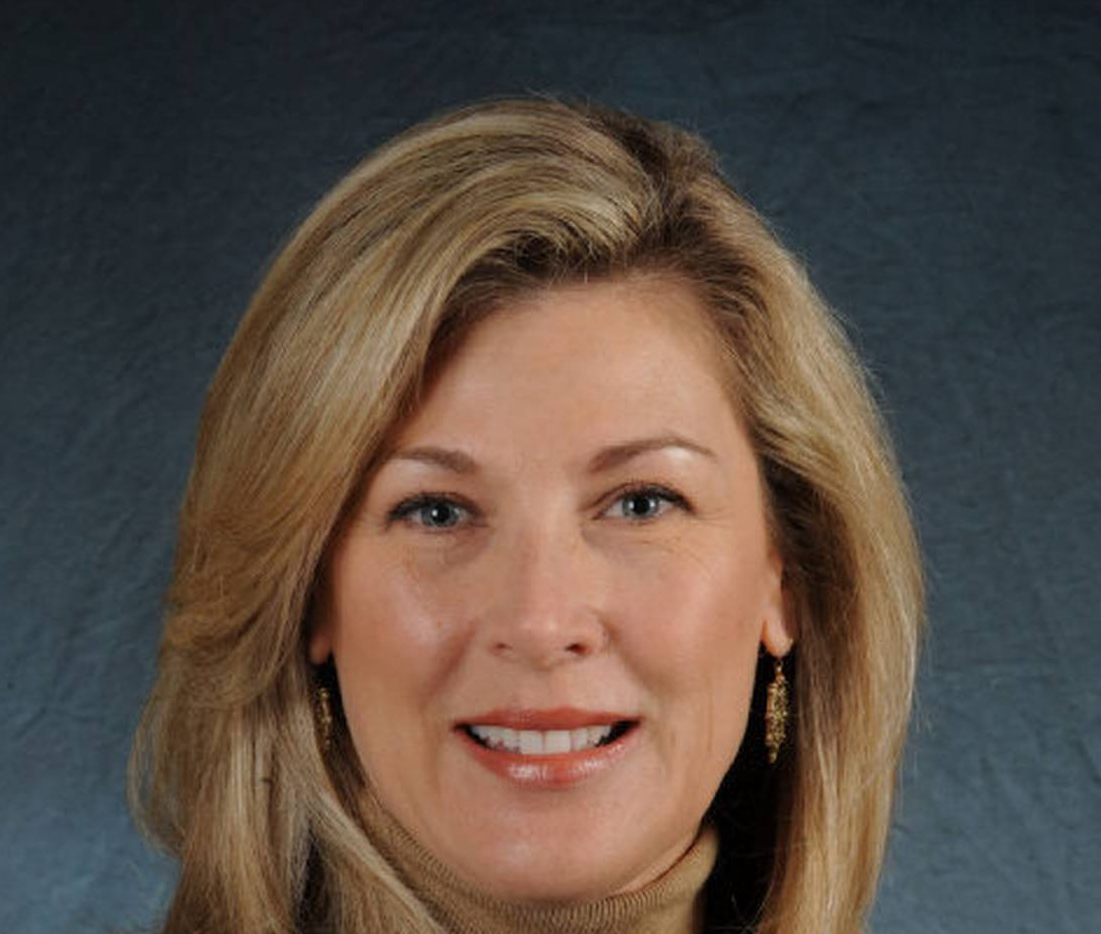 He played seven seasons in the NBA, the last of which was in 2016-16 when he suited up for the Charlotte Hornets. In 2017, Hansbrough played for the Fort Wayne Mad Ants in the NBDL before signing with the Guangzhou Long-Lions in the Chinese Basketball Association later that year.

Enough of Tyler though as his mom is the topic of our conversation. Tami Hansbrough was married to ( and later divorced ) Tyler’s dad Gene, an orthopedic surgeon. She worked as an Associate Director of development at the University of North Carolina School of Dentistry to serve as fundraiser for major gifts. Tyler was senior at that time and led the Tar Heels to the National title that season. But after Tyler graduated, she got involved in a scandal where she and boyfriend Matt Kupec illegally used school money to fund personal travel. She and Kupec resigned from their respective positions at UNC.

Traveling with boyfriend at the school’s expense? What fundraiser was that? Surely it raised something else other than funds.

Here’s a better view of Tami Hansborough though, if you need one. 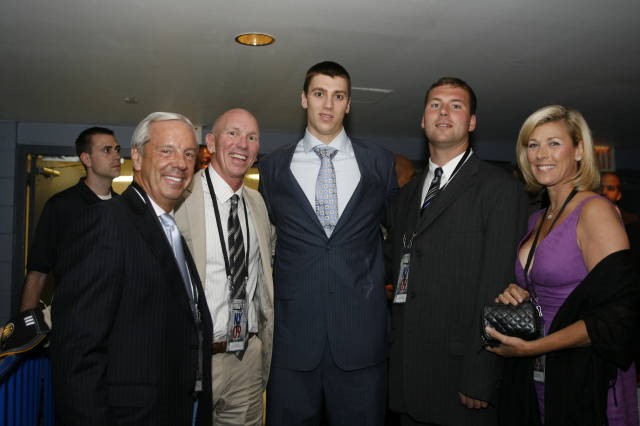 Literally, Tami was a bad mama for that. Otherwise though, well….what do you think? 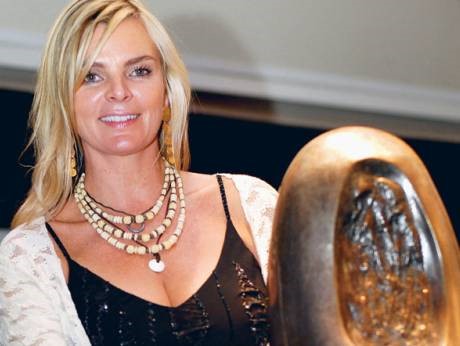 If Tyler Hansbrough’s mom didn’t really live up to your standards, what about Joakim Noah’s mom, Cecilia Rodhe?

Noah was the Chicago Bulls’ 9th overall pick in 2007. But after two All-Star appearances, making two All-Defensive First teams and winning Defensive Player of the Year in 2014, Noah’s performance began to drop. In 2016, he signed with the New York Knicks as a free agent. After a knee surgery midseason, he was suspended for 20 days for violating the NBA’s anti-drug policy. He spent the following season at the end of the Knicks bench after a spat with head coach Jeff Hornacek.

With Hornacek out as coach, it remains to be seen whether Noah can regain a spot on the Knicks’ rotation or if he will be moved somewhere. For now though, let’s talk about his mom.

Cecilia’s profession alone makes her hot….she’s a sculptor. That’s correct. And if we add the fact that she was Miss Sweden 1978 and finished 5th in the 1978 Miss Universe competition in Mexico, well that decides the case. No wonder she’s got the stunning good looks and well, the hot mom body as well.

She was previously married to former tennis superstar Yanick Noah, who is Joakim’s dad. Aside from Joakim, the former couple also has a daughter named Yelena.

Here she is ..at the middle: 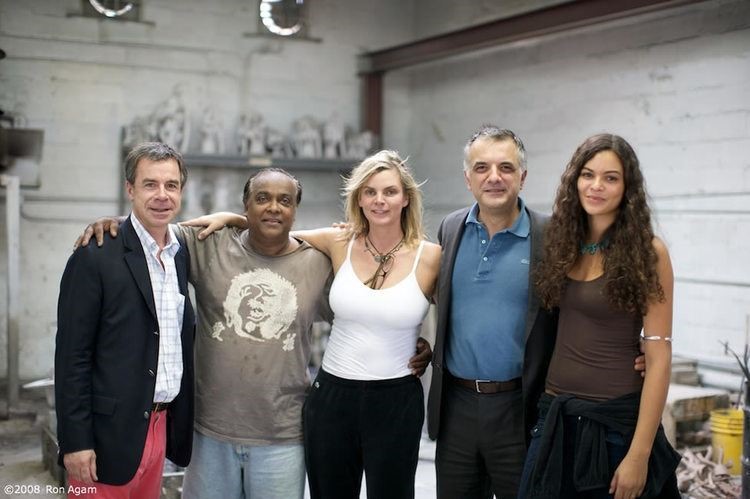 The chick at right is Joakim’s sister Yelena and ye gotta love her too. But his mom, well oh well, if you’re talking about the NBA’s hot moms, she’s gotta be up on that list too. Don’t you agree? 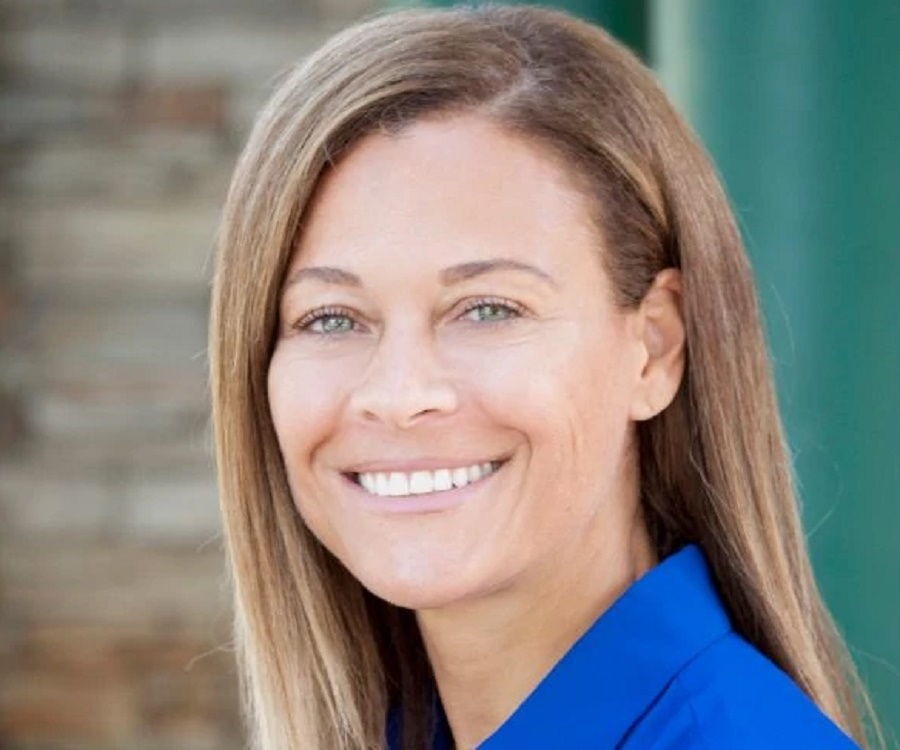 Sonya was into volleyball, basketball and track and field during her high school days at the Radford High School in Radford, Virginia. During her senior year, her school won the state AA volleyball championship and she was named Virginia Defensive Player of the Year. Radford also won two state championships with Sonya on the team.

After becoming one of the top volleyball prospects in high school, she chose to attend Virginia Tech where she was named to the All Metro team during her junior season. Sonya graduated with a degree in elementary education and a minor in family studies.

She met husband Dell at the Virginia Tech campus when he was a junior and she was a freshman. The couple married in 1988 and have three children: Stephen, Seth and Sydel. Of course most of us know only Steph. But that’s okay, we’re talking about Sonya here. 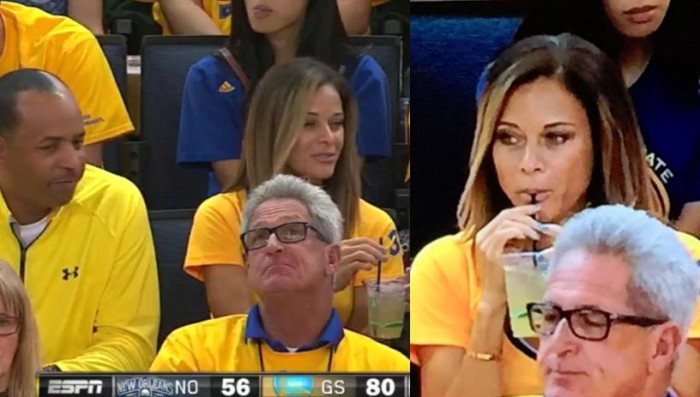 Sonya is currently the Head of School of Christian Montessori School of Lake Norman. She’s had 24 years of experience in an educational institution, including 21 years at CMSLN. We see her during the Warriors’ games, often with Steph’s wife Ayesha. You sometimes wonder which one is hotter….

Up to last season, Sonya reigned as the hottest and most popular NBA player mom. But that should change during the 2018-19 season. No doubt about it. Luka Doncic’s mom is going to steal the show in Dallas.