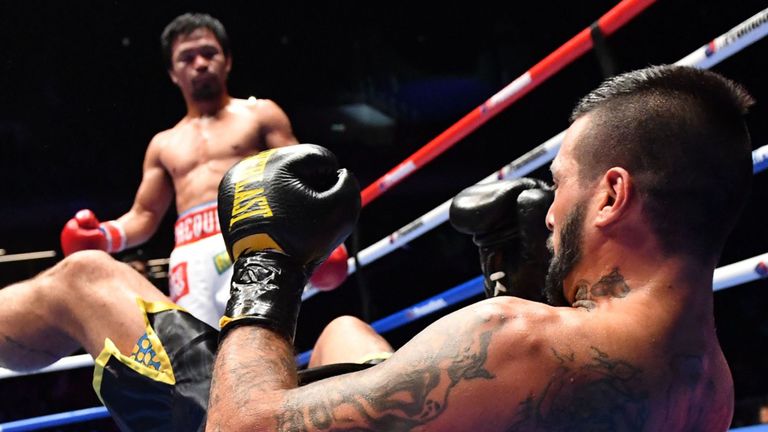 Manny Pacquiao silenced all his doubters with a vintage performance against Lucas Matthysse on Saturday night in Malaysia.

Pacquiao brought back the aggressive Pacman as he dominated Matthysse for 7 rounds en route to winning the latter’s WBA (regular) welterweight title. The belt was another feather in the cap for Pacman but the win proved that even at 39 years of age, he still has what it takes to compete with the elites of the division.

A well-time uppercut dropped Matthysse for the first time in the 3rd round. Two rounds later, the Argentinian machine took a knee after a couple of hooks to the temple. Then in the 7th round, Pacquiao landed another left uppercut that sent Matthysse down a third time. As referee Kenny Bayless was administering the count, Matthysse spit out his mouthpiece, prompting Bayless to put a halt to the bout.

Pacquiao didn’t just overpower Matthysse, he broke his opponent down with volume punching. Pacquiao threw 344 total punches compared to Matthysse’s 246. The Pacman also out-landed El Maquina 95 to 57. According to Compubox, Pacquiao also connected on 44% of his power shots.

But while the victory in itself was impressive, it didn’t prove anything and was merely a feel good moment for Pacquiao and his supporters. What it does though is give the Filipino fighting senator a chance to go out on top.

Manny Pacquiao was tearing up one opponent after another during his rise in the weight classes. But as he got into the heavier divisions, his punching power seemed to disappear. There was no surprise to that though because Pacquiao has always been a small welterweight, often fighting in catchweights to eliminate his opponents’ advantage in size.

In 2009, Pacquiao knocked out Miguel Cotto, who then was one of the most feared punchers in the sport. But Pacquiao and Cotto fought at a catchweight of 145 pounds, eliminating Cotto’s natural advantage in size. The victory of Cotto is believed to be the peak of Pacquiao’s powers. Since that victory, Pacquiao didn’t record another knockout-until Saturday night (Sunday noontime in Malaysia).

Prior to the Matthysse fight, Pacquiao went the distance nine times. During that period, he went 9-4, including the controversial loss to Timothy Bradley (first fight) and the disputed defeat Jeff Horn. Pacquiao had not fought since losing to Horn. He is 39 and will be turning 40 in December. He is also busy as a lawmaker in his home country. And he fought without Freddie Roach for the first time since his breakout fight against Lehlo Ledwaba in 2001.

During his fight against Jeff Horn, Pacquiao showed flashes of his old brilliance. But for most of the fight, he looked like an old man who was being roughed up by a younger punk. Horn abused Pacquiao inside the ring, although most of it were dirty tactics. Still, Manny looked like a shot fighter last year. If there were doubts that he didn’t have the desire anymore, those doubts are gone now. The Pacquiao of old and not the old Pacquiao showed up against Matthysse.

But while Lucas Matthysse was a big name (no doubt about that) with a world title belt (a secondary one though), he was never really going to give a 39 year old Manny Pacquiao a challenge inside the ring.

For one, Matthysse has lost the biggest fights of his career. Yes, he was a world champion coming in to this fight but it was a secondary belt, that WBA “regular” title. Prior to winning the belt last January, Matthysse took a year and a half off to heal an eye injury he suffered during his loss to Viktor Postol. Matthysse also quit during that fight because he suffered the injury.

Although he was welterweight champion, Matthysse isn’t also a natural welterweight. He’s fought majority of his professional boxing career as a 140 pounder. In fact, the Pacquiao fight was only his third fight at 147 pounds. Pacquiao meanwhile has been campaigning at 147 pounds since the Cotto fight in 2009. Matthysse has never known to be quick on his feet. The added weight at welterweight even made him more slower.

Aside from being too slow, Matthysse also was never known to have good head movement. The Argentinian machine also knows only one way to fight and that is to plod forward with his haymakers. 36 of Matthysse’s 39 wins have come via knockout. So while he was a feared puncher, he was far from an elite boxer. In shot, Matthysse was the perfect opponent to make Pacquiao look good. He was tailor made for the Filipino ring legend.

Nothing More To Prove

Still, Lucas Matthysse’s shortcomings aren’t Manny Pacquiao’s fault and they don’t take anything away from a fantastic performance by one of the greatest fighters of this era. Great as it was though, it doesn’t prove anything except that Pacquiao is already a 39 year old fighter.

While he still threw punches in bunches, it was obvious that Pacquiao has lost a step or two. That’s expected, given his age. And against an slower and smaller opponent, he will still look good. But against the younger and hungrier lions in the division like Errol Spence, Keith Thurman and Terence Crawford, Manny Pacquiao will certainly look his age.

Pacquiao talked about the possibility of fighting again this year, but obviously, there is no more need to fight for Manny Pacquiao. He’s been boxing for 23 years and has achieved everything there is to achieve- well of course except beating Floyd Mayweather Jr. But other than that, Pacquiao’s legacy is secure. There is nothing more to prove for Manny Pacquiao.

The win against Lucas Matthysse is probably Pacquiao’s biggest win since beating Cotto because in that victory, his fans saw the Manny Pacquiao they fell in love with two decades ago. You can argue that Pacquiao can still beat Top 10 fighters but for sure, he is no match for the likes of Crawford, Spence and Thurman. No, not because those fighters are better but because he is way past his prime.

Let’s face it, the Manny Pacquiao we all loved has been gone for nearly a decade. What we saw on Saturday night was just the old him turning the page one more time. But when Father Time catches up on you, you can’t keep on turning back the hands of time. Let’s just hope that when Pacquiao goes home, he realizes that. It’s always special to go out on top because not all the greats do. For Manny Pacquiao, this might be it.