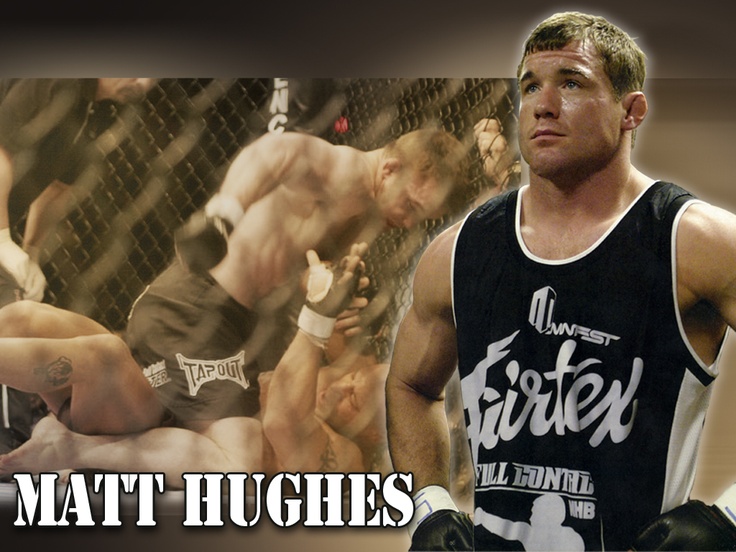 Matt Hughes’ Progress Is Nothing Short of A Miracle

Matt Hughes going out for some sushi doesn’t sound like very interesting news. But when you realize that Hughes was in a coma and put in a ventilator two months ago after a near fatal truck accident, it’s got to be news. Encouraging news.

On Sunday night, Matt’s good friend Tony Zucca posted on Instagram the first photo of the former UFC welterweight champion since the accident:

I can't even describe the emotions I am feeling as I write this post. Less than two months ago I didn't know if my best friend was going to make it, and tonight we made a jail break for sushi (in disguise. Ha). Talk about a rollercoaster of emotions! His progress is nothing short of a miracle. He is working so hard and fights through the frustration. He is, as he's always been, an inspiration. I can't wait to hit the mats with him again...and he told me today that he has "one more round" left in him! Ha. (He laughed...but definitely wasn't joking!). Thank you for all of your prayers! Please keep them up as he still has a long road ahead of him. I am witnessing the power of them firsthand! So thankful!

Nothing Short of A Miracle

Considering the accident, it’s no surprise why Matt Hughes looks almost unrecognizable in the photo. He looked slimmer, frail and very different from the stocky and muscular octagon veteran who won the UFC welterweight title on two separate occasions during his hall of fame career.

But yes, seeing Hughes for the first time since the accident is nothing short of a miracle. Not many expected him to make this kind of recovery. After the accident, there were talks of potential brain damage and coming out of the coma this soon was already a miracle in itself. Having a ‘jailbreak’ for sushi is very encouraging, despite still being in a wheelchair.

In mid-June, Hughes’ truck collided with a train on Beelers Trail in Montgomery County, Southwest of Raymond and 12 miles off his Hillsboro, Illinois home. According to the report from Illinois State police, Hughes drove his pick-up truck across a railroad grade, crossing directly in front of a train when the train collided with vehicle, hitting the passenger side of the truck.

Hughes didn’t suffer any broken bones or any internal injuries but he was airlifted to the HSHS St. John’s Hospital in Springfield, Illinois and stabilized by a trauma team. Hughes was barely responding after a week and remained unconscious until fellow UFC Hall of Famer Pat Miletich revealed last month that Hughes was out of the coma.

Matt Hughes was one of the first superstars of the UFC. He is considered as one of the best welterweights of all-time, having held the 170 pound title from 2001-2004 and 2004-2006. During his prime, he put together two six fight winning streaks and defeated all available contenders during his era. Hughes defended the welterweight title seven times, a record that stood before Georges St. Pierre broke it.

Hughes retired in 2013 after suffering back to back losses to Josh Koscheck and B.J. Penn in 2011. During his illustrious career, he defeated the likes of Georges St. Pierre, Sean Sherk, B.J. Penn, Royce Gracie, Renzo Gracie, Frank Tigg and Matt Sera among others. He was inducted to the Hall of Fame at the UFC 114 Fan Expo in 2010 and later joined the UFC as Vice President of Athlete Development and Government Relations.

A month before his accident, Hughes told media that he was contemplating a return to MMA. Said Hughes to Ariel Helwani at the MMA Hour:

“I would love to come back. I didn’t want to retire in the first place. Dana thought it was the best thing for me and so did my stinking wife. My wife said she didn't want me to fight anymore and that it wasn’t as fun like when I was out there kicking ass. She didn’t like the worry, and Dana said the same thing, so that’s why I retired.”

“I would love to go out and fight again. My problem is, I lost my last two fights and that’s the only thing I think about is those stinking losses,” he added. “What would be fun for me is to fight with my buddy Chuck Liddell, if he came out of retirement. It would be a blast to fight on the same card together.”

Hughes and Liddell were reportedly on the radar of Bellator MMA who in recent years have brought back the legends of the sport to fight for their promotion. Bellator brought back the likes of Ken Shamrock, Royce Gracie, Tito Ortiz and Chael Sonnen to add star power to their events. There were no serious negotiations with Liddell or Hughes but President Scott Coker openly said he was willing to talk. That will have to wait.

Priorities have changed. Before he can think of a return in mixed martial arts, Hughes must complete a more important comeback. The road to recovery is long and oftentimes frustrating but it starts with small steps. Going out for sushi on a weekend is just one of those small victories.

Tony Zucca said that Matt Hughes told him that he ( Hughes ) still had ‘one more round’ left in him. Zucca added that Hughes laughed when he said that but wasn’t joking. Knowing the competitor in Matt Hughes, that is not impossible. He may not be able to fight inside the octagon once again. But overcoming this trial will be a victory more valuable than any of his cage conquests.