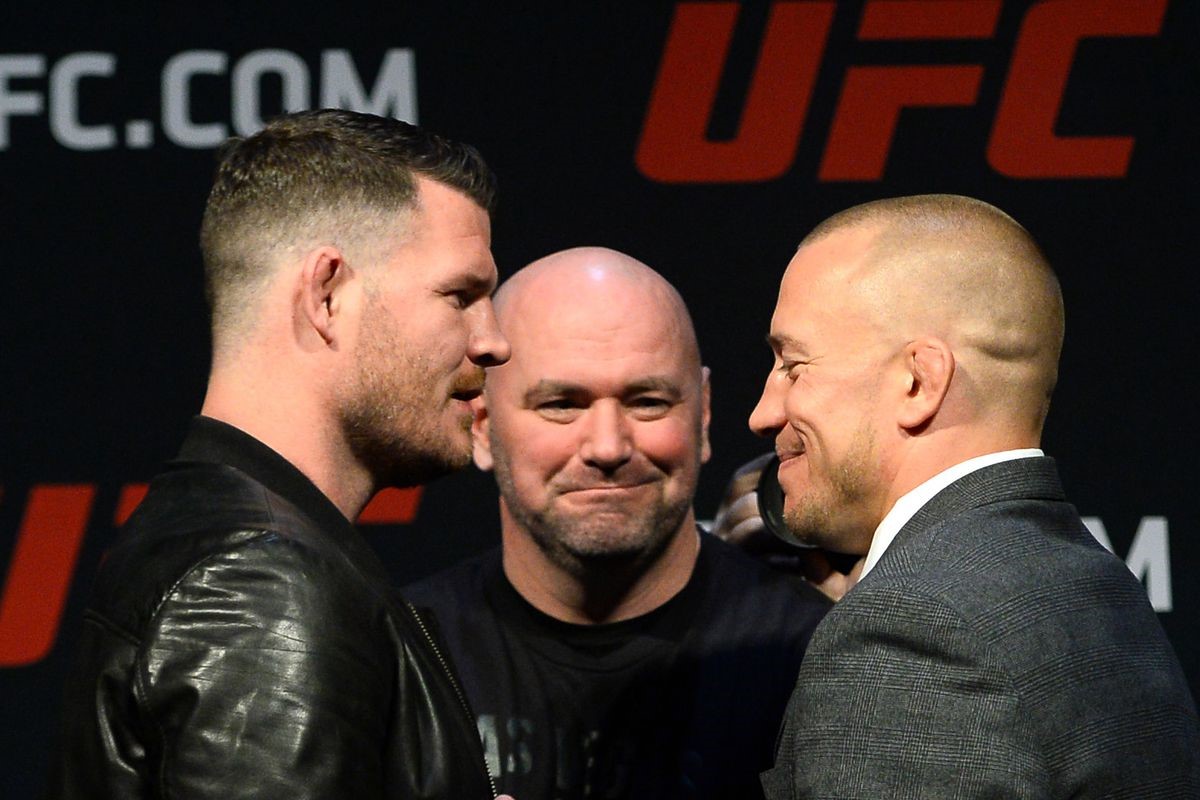 Almost one year after their fight was first announced, Michael Bisping and Georges St. Pierre finally go at each other this Saturday night at the headliner of UFC 217 in New York.

Bisping will make the second defense of his middleweight belt while St. Pierre attempts to become the third two division champion in company history. Bisping and St. Pierre have two of the most storied careers in UFC history. Combined, their 50 total UFC bouts are the most ever for two protagonists fighting in a world title fight. If you think that’s impressive, that’s just the tip of the iceberg. 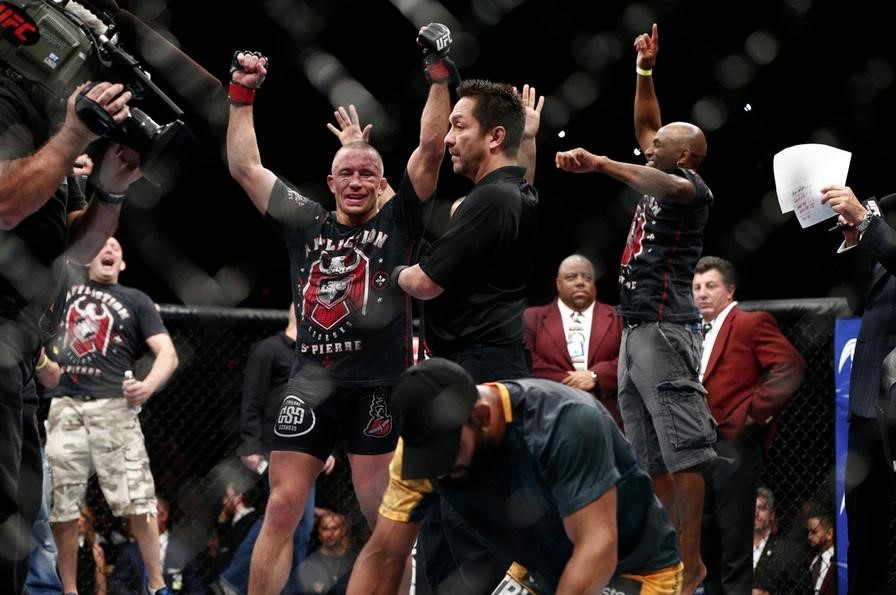 Before Ronda Rousey and Conor McGregor took the UFC by storm, there was Georges St. Pierre. St. Pierre was the most recognizable fighter in the sport. Not only way he the top Pay per View draw of his generation, he was also its most dominant fighter.

St. Pierre was a two-time UFC welterweight champion who competed in a total of 14 title fights ( second to Randy Couture’s record of 15 ), winning 12 of them ( tied with Demetrious Johnson for most in UFC history ). 9 of those victories were title defenses, won consecutively, from 2008 to 2013. That stood as the UFC record when St. Pierre relinquished his belt. Since then Johnson ( 12 ) and Anderson Silva ( 10 ) overtook it.

Relinquish is the key word. St. Pierre never lost his belt during his second reign as welterweight champion although his critics say he should’ve, against Johny Hendricks at UFC 167 in 2013. After that controversial win, St. Pierre walked away from the sport without clear reason. He later said he did so because among others, he had lost his love for the sport. In short, it was like a burnout that forced GSP to a hiatus in 2013. 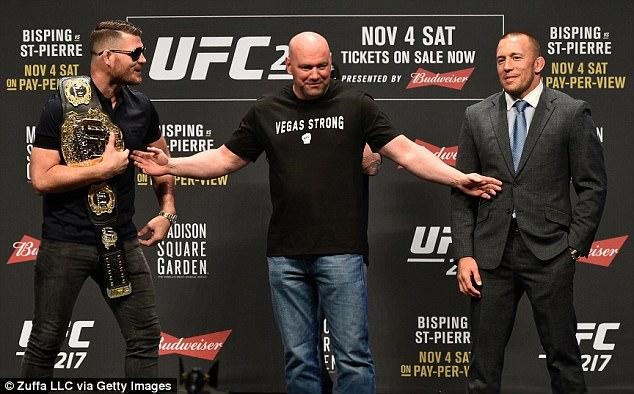 On Saturday, St. Pierre returns to the UFC Octagon after nearly four years - 1,449 days to be exact, the longest layoff in his UFC career. He will face Michael Bisping at the main event of UFC 217 at the fabled Madison Square Garden in New York. The fight will be for the UFC middleweight championship.

If St. Pierre wins, he will become only the third fighter in UFC history to win world titles in multiple weight classes. The only other fighters to accomplish that rare feat are Randy Couture and Conor McGregor. The problem is that not only St. Pierre is coming off a long hiatus but he is also fighting at a higher weight class, one he’s never fought at before.

But perhaps it’s that challenge in chasing history that’s driven St. Pierre back to the octagon. Whether his highly anticipated return ends in a fairy tale is another story. He will be facing a formidable opponent in Bisping. The Englishman isn’t just the naturally bigger fighter, he’s also equally notable. 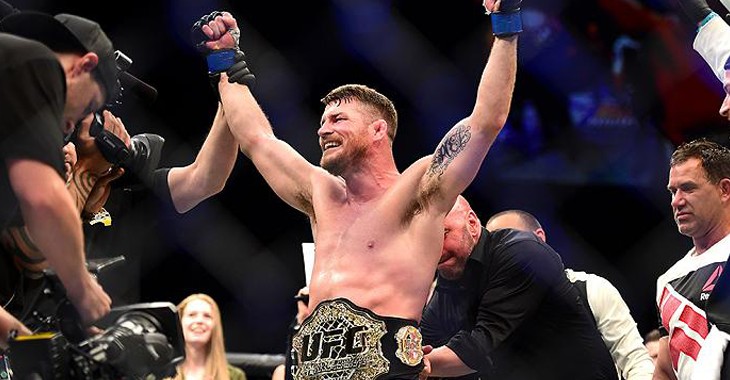 Michael Bisping has been in the UFC forever. At UFC 217, he will be making his 28th UFC appearance, tied for the most in promotion history with Jim Miller. It will also mark his 23rd middleweight fight, a new record for most fights in division history. Bisping’s total octagon time of 5:48:40 is second longest in UFC history, only Frankie Edgar’s 6:27:49 is longer.

Saturday night will also mark the 13th time Bisping will be involved in a main event bout. He is 8-4 overall in headliners. Including UFC 217, 21 of Michael Bisping’s 28 UFC bouts have either been the main event or co-main event. These speak highly of Bisping’s status in the UFC.

The Count owns the most victories in UFC competition with 20 ( St. Pierre is among three fighters tied for second with 19 ). His 16 wins at middleweight are the most in divisional history. His 10 knockouts are 4th most in UFC history while his 7 knockouts in the middleweight division ranks only next to Anderson Silva’s record of 8.

Put these two legends together in one fight and you have a super fight. Champion vs Champion from different weight classes. Not only that. St. Pierre was a well-loved fighter during his time. Bisping is a hated man because of his foul mouth so it’s also a hero vs villain battle of sorts.

St. Pierre was the PPV magnet of his generation but he never had McGregor’s gift of gab nor the Irishman’s ability to promote fights with his WWE-styled mouth. Bisping has both. Not only does he have that rare gift of gab, his biggest claim to fame is his natural ability to trash talk his opponents, pro-wrestling style.

In fact, if there’s one man who can match McGregor foul word for foul word, it’s Bisping. If there’s one fighter who can promote an event using his mouth alone, it’s Michael Bisping. St. Pierre meanwhile, doesn’t talk too much. He does his talking inside the eight-sided cage. 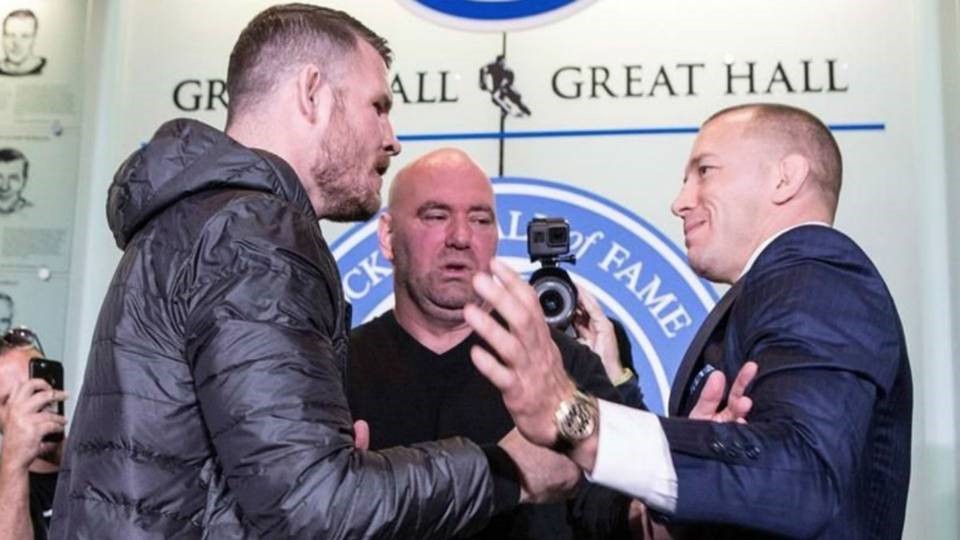 It’s not just their personalities that contrast. Bisping is a volume striker who likes to put constant pressure on his opponents by keeping himself busy. St. Pierre was the supreme grappler who took out his opponents chances of winning by taking them to the ground relentlessly.

Bisping owns the UFC record for most significant strikes landed with 1,533. Georges St. Pierre is the UFC record holder for most takedowns landed in a career at 87. Michael Bisping is one of only five UFC fighters to land at least 100 significant strikes in five different bouts. The Englishman’s total 210 leg kicks landed in middleweight competition are the most in the history of the 185 pound weight class.

Georges St. Pierre’s 73.7% takedown accuracy is second best in the history of the UFC. His total control time of 2:35:57 currently stands as the UFC record. He has gone 175 straight minutes of winning cage time without a stoppage, the longest stretch among active UFC fighters. GSP’s 23 submission attempts are third most in welterweight history. 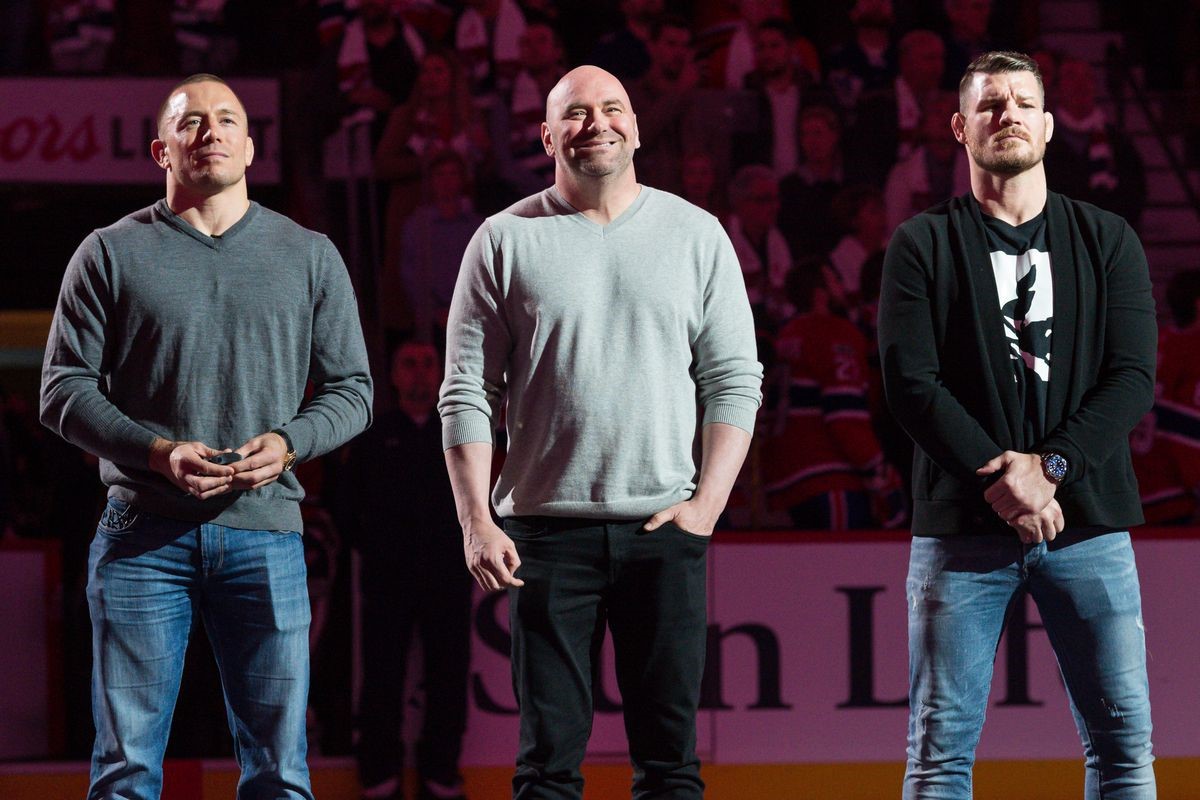 They say that styles make fights and this one makes for a very interesting fight - good or bad of the word. Bisping’s high volume attack always produces exciting battles. We don’t have to go farther back than his back and forth war with Anderson Silva in 2016 which virtually earned him that replacement title shot against Luke Rockhold at UFC 199.

St. Pierre meanwhile is unbeaten since 2007 but majority of his bouts have been called ‘boring’. That’s because the Canadian superstar was grit and grind personified. GSP was always content to taking his opponents down and laying on top of them until he drained them of their will to fight.

You may find it interesting that St. Pierre is the UFC leader for total strikes landed in a career ( with 2,523 ). But only a handful of those strikes were landed in a stand-up and were usually done so to set up a takedown. GSP landed most of his strikes on the ground and on top of his opponents. 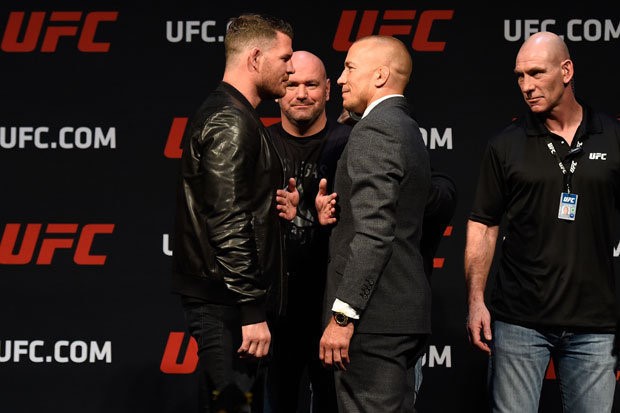 Georges St. Pierre is the best welterweight of all-time, no doubt. But to challenge for the middleweight title after four years of hiatus and never having to beat a single middleweight contender to earn the fight isn’t fair, not especially when you have the likes of Luke Rockhold, Robert Whitaker, Yoel Romero, Chris Weidman and Derek Brunson waiting in line.

Add the fact that Bisping has fought just once since winning the belt from Rockhold in April 2016 and that that lone bout was against an unranked, 40-something, over the hill Dan Henderson who had lost six of nine bouts. Don’t forget that Bisping struggled to beat Henderson too.

UFC title bouts were supposed to be the best vs the best. But since McGregor arrived, that has changed. Rankings have taken a backseat to PPV buys. The best fights are secondary to the biggest fights that could be made. This is an example. You can’t deny the significance of Bisping and St. Pierre in the history of the sport. But you can’t say either that this is a true middleweight title fight. Let’s hope they won’t disappoint on Saturday night.