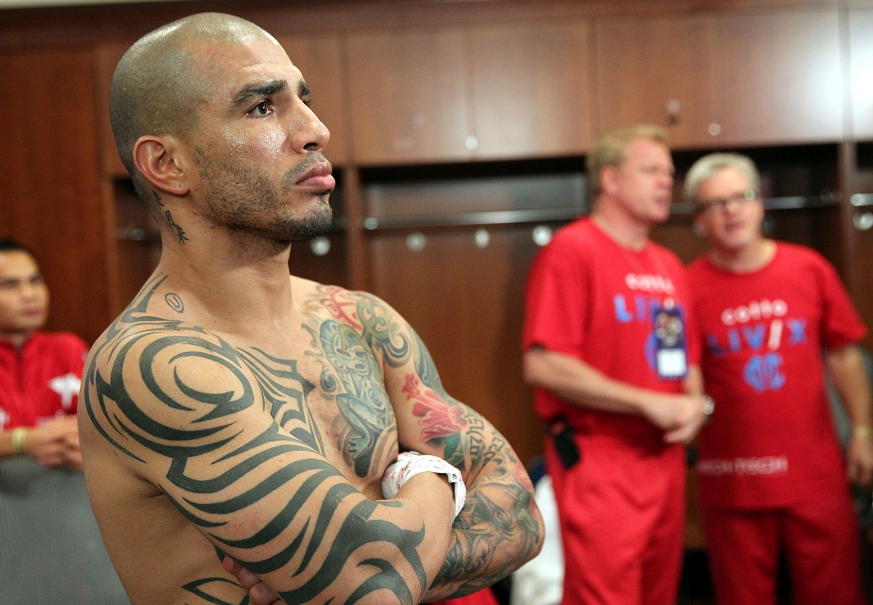 Known as a pressure fighter and as a hard hitter, Cotto is a huge fan favorite in New York, which boasts of a large Puerto Rican population. Seven of his fights in New York were held on the eve of the Puerto Rican Day parade, a march along Fifth avenue on the second Sunday of June. Cotto has fought 10 times at the Madison Square Garden and has lost just once there, to Trout in 2012.

Not only has Cotto been a staple in New York, he is also one of the top PPV attractions during his era. Eight of Cotto’s fights were on PPV events ( seven under HBO and one under Showtime. ) His bout with Manny Pacquiao generated 1.25M views while his showdown with Mayweather had 1.5M buys.

A month before fighting Kamegai, the 36 year old Cotto announced that he will be retiring at the end of the year. Cotto said that he had already achieved more than he ever imagined in the sport of boxing and that it was time to move on to dedicating his life to his family and live a healthier life:

"I've been enjoying everything since arriving in Los Angeles in 2013, so I have not lost any motivation when it comes to training. I remain positive, I will continue doing good and until the 31st of December I'll be good. There is a lot of satisfaction and work, but most of all is the satisfaction of knowing that I have achieved more than I could have ever imagined. What I was going to do in my career is already coming to an end. I have to dedicate myself, my body and soul to my home and from then on to crown a healthier environment."

For his farewell bout, Cotto would have loved to fight the winner of the September 6 bout between Saul ‘Canelo’ Alvarez and Gennady ‘GGG’ Golovkin. But that fight ended in a close and controversial draw and will likely face each other in an immediate rematch, likely on Cinco de Mayo weekend and with no interim bouts for both in between.

Among those names mentioned, it was reported that Mikey Garcia came close to signing the offer, despite the huge disparity in weight. Garcia didn’t mind moving up in weight to fight Cotto however, Golden Boy’s contract included a stipulation requiring Garcia to commit to three more fights under Golden Boy after Cotto. Garcia’s had problems with a promoter in the past, so he turned down the fight.

In the end, only Sadam Ali took Golden Boy’s offer. Ali is a 2008 U.S. Olympian who has a record of 25-1, with 14 KOs. The 29 year old from Brooklyn, New York once challenged for the WBO welterweight title and was knocked out by Jessie Vargas. Ali is coming off a wide decision win over former interim 140 pound champion Johan Perez last July 29. The victory was Ali’s third in a row since losing to Vargas.

However, much as we applaud Ali for taking the fight, we’re among those disappointed in Cotto’s choice of opponent. We’ve seen Miguel Cotto in so many wars before that we’re surprised why he chose an underwhelmed opponent for his final bout. Cotto is a huge step up in opposition for Ali but it’s the opposite for the Puerto Rican.

With all due respect to his credentials, Ali is just a fringe contender who hasn’t really beaten any big name in the pro ranks. Sure, he was an amateur standout but he has not been able to carry over his success to the next level. Ali was even knocked out by the pillow fisted Jessie Vargas in a 147 pound title bout. What do you expect against a 154 pound champion like Cotto?

Early in the year, it was rumored that Cotto would face former middleweight champion David Lemieux. Lemieux is coming off a sensational KO of Curtis Stevens last March and a decision win over Marcos Reyes in May. A bout between the two would have been fireworks but Cotto seems to prefer taking the easier route.

Miguel Cotto has had an excellent boxing career that will almost surely translate to a first ballot induction to the international boxing Hall of Fame. It is sad to note that he is leaving the sport for good. But nearing 37 years of age, it’s about the right time to hang up those gloves. Miguel Cotto’s legacy is secure. However, in choosing the easy way out for his retirement bout, you can’t help but think, maybe his detractors were right all along: Miguel Cotto is indeed a diva.