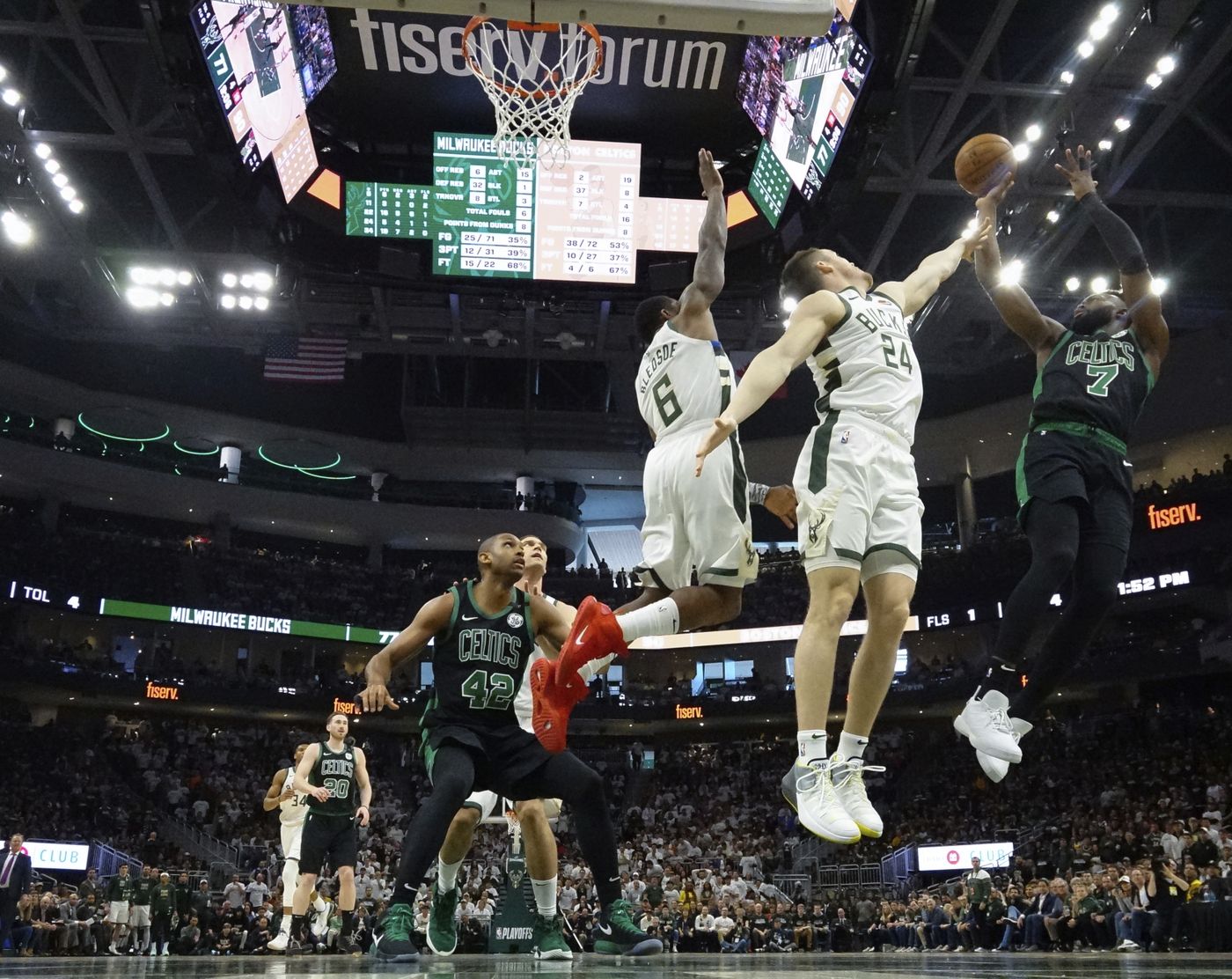 After an inspired total team performance by the Boston Celtics in the series opener, the Milwaukee Bucks returned the favor as they hammered out a strong third quarter display to even the series and reclaim homecourt advantage. With the series going to the historically-rich basketball city of Boston, the Celtics will definitely feed off the energy of a crowd wanting no less than the 18thchampionship banner in the rafters. It will be a battle of two powerhouse teams that will ultimately lead to a classic duel by superstars Kyrie Irving and Giannis Antetokounmpo.

18 total free throws in Game 2. That single stat alone says a lot about the Greek Freak’s aggressiveness in the second game. After being limited by Horford and the suffocating Celtics defense in the series opener, Giannis got extra aggressive in attacking the rim and a massive free throw tally became his reward. Horford can only do so much as he also covers a lot of bases in Boston’s defensive schemes so the Celtics can’t really stop Antetokounmpo from racking up the points. For the Bucks to again be successful in Game 3, they need their MVP candidate to hack-and-slash all the way through the rim as it can open up a lot of opportunities for his teammates. Take for example Middleton’s seven three-pointers in Game 2.

4-18 for only 9 total points. While the loss isn’t entirely Kyrie’s fault, he is still the fire that the Celtics need to emerge victorious. Overall, it was just a horrible offensive showing for Boston’s most skilled scorers – they got only 10 total points from both Gordon Hayward and Jayson Tatum. With those paltry numbers from their two scoring forwards, you would expect Irving to rack up the points, right? You guessed wrong. It’s not the unwillingness to be shot-hungry as he had 18 attempts in Game 2. The Celtics have to do a better job getting Kyrie on his rhythm or else they fail again and go down a 1-2 hole after Game 3.

With only 5 points in the second game, Jayson Tatum now has a grand total of 9 points in the series. Tatum was an offensive beast during the Celtics’ playoff run last year. He posted 18.5 points on just 10.0 attempts last postseason, but so far, we haven’t seen that kind of production this year. Clearly, something isn’t right with the talented 6-foot-8 forward and it might be time for him to lessen the isolation plays and involve himself more with off-ball scoring opportunities. With Hayward also struggling as we expected him to be, Tatum has to switch up the gear and find more ways to contribute on both ends of the floor.

Irving had zero attempts from the free throw line. So far, Kyrie hasn’t been to the charity stripe in this series. It’s quite astonishing to find out that a ball-handling wizard who has amazing finishes around the rim can’t even fish for a foul. Luckily for him in the first game, his shots were falling so this wasn’t an issue at all back then. But in Game 2, Kyrie struggled mightily from the floor, and it could definitely help if he had been to the free throw line a couple of times to regain his confidence and rhythm. It may be that Milwaukee is doing a good job not giving him the green light to drive to the paint, but if his shots aren’t falling like it did in Game 2, Kyrie has to use all his trickery to get creative around the rim and force the referees to blow the whistle.

Prediction: Celtics draw a fine performance from Irving on the way to a hard-earned victory

I still see the Celtics winning this series, and if that should deem true, they have to win Game 3 and avoid the risk of giving the Bucks too much momentum entering the pivotal fourth game. In the previous game, the Celtics were still very much in the game despite measly performances from their top scorers. Everything was just falling for the Bucks offensively in the third quarter, and that was when the game slipped out of Boston’s hands. It is also obvious that the green-and-white was not quite ready for the Bucks’ switching defensive scheme so that could be their point of adjustment before Game 3. Most importantly, it’s hard to imagine Kyrie having another massive off-night. There’s also a high possibility that Tatum will be motivated from his non-existence in the first two games. It will be a close-call game entering the dying minutes of regulation, but expect both Irving and Tatum to turn on the scoring jets and overwhelm the Bucks on their way to an important Game 3 win.