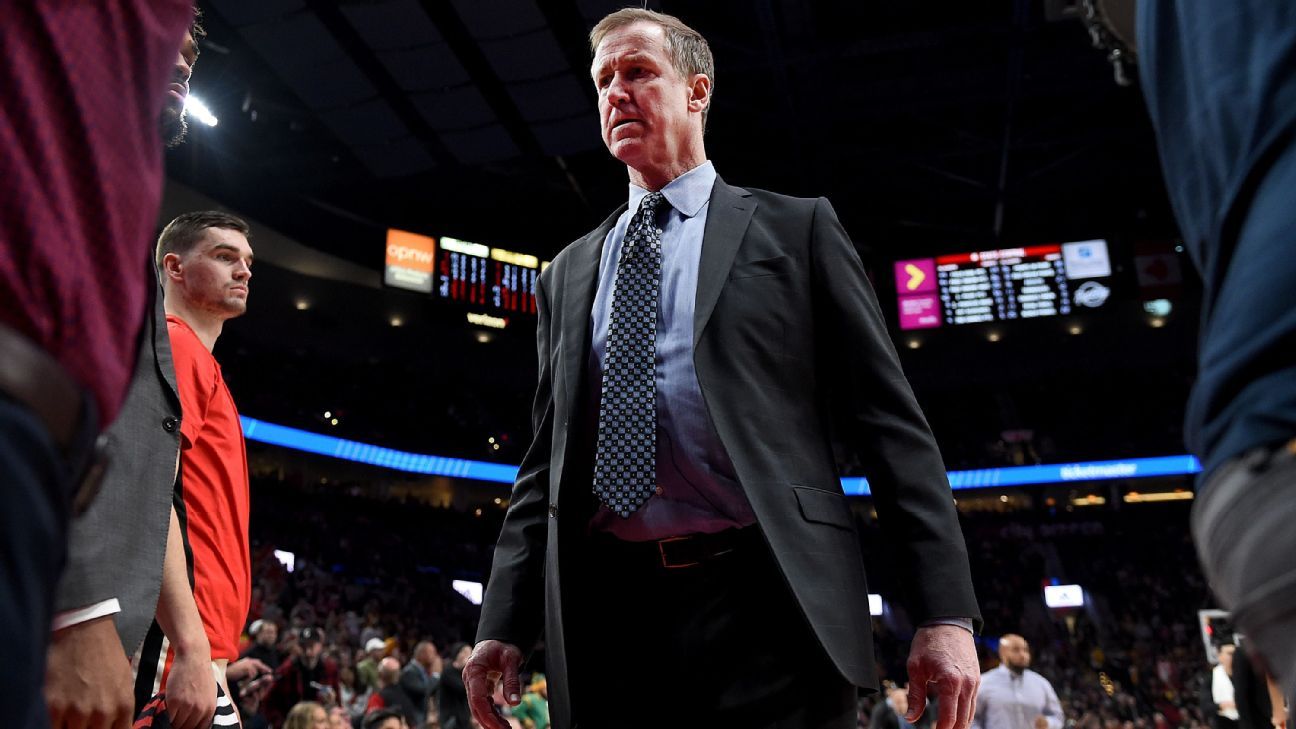 After another disappointing first round playoff exit, the Portland Trail Blazers are now bent on making a big change not just on their roster, but also on their coaching personnel. After nine years of productive partnership, the Blazers and head coach Terry Stotts have mutually parted ways.

As per a breaking report by Senior NBA Insider Adrian Wojnarowski of the ESPN, the Blazers have finally put an end to Stotts’ long tenure with the team, a very fruitful stint that produced eight playoff appearances for the franchise. But while it is true that the Blazers have been in the playoffs year in and year out, the team has lost in the first round of the playoffs in the last five years.

Neil Oshley, the Blazers’ president of basketball operations, pointed out that this was a very difficult decision in all fronts. Oshley said that while it is true that parting ways with Stotts is hard on both the personal and the professional level, it is also a fact that the team needs a change in direction right now.

"I have the utmost respect for Terry and what he has accomplished these past nine seasons," president of basketball operations Neil Olshey said in a statement. "This was a difficult decision on both a personal and professional  level but it's in the best interest of the franchise to move in another direction.

Terry will always hold a special place in the Trail Blazer family and the Portland community. We relied on the integrity, professionalism and consistency he brought to the job every day and we wish he and Jan nothing but the best."

Stotts, who is now 63 years of age, started his NBA coaching career as an assistant coach for the Seattle Supersonics during the 1994-95 NBA season. He spent four seasons with the Sonics, before he transferred to the Milwaukee Bucks in 1998 to also work as an assistant coach.

Stotts’ first head coaching gig in the NBA came during the 2002-03 NBA season when the Atlanta Hawks brought him in as their top coach. However, it would prove not to be a successful stint as the Hawks compiled a record of 24 wins and 31 defeats in Stotts’ first year with the team, then followed it up with another lowly record of 28 wins against 54 losses the next year.

Stotts then went back to assistant coaching for a year with the Golden State Warriors, before accepting another head coaching role with the Milwaukee Bucks in 2005. His first year with the team turned out to be a decent one after sporting a record of 40 wins against 42 losses. Stotts had the promising rookie big man Andrew Bogut at that time, along with sophomore point guard T.J. Ford, sweet-shooting shooting guard Michael Redd, and experienced veterans such as Toni Kukoc and Joe Smith.

But Stotts and the Bucks struggled the following season, leading to the end of their two-year partnership. Stotts was then hired as an assistant coach for the Dallas Mavericks in 2008, and stayed there for four years. Then it was in 2012 when Stotts became the head coach of the Blazers, forging a partnership that would last for nine years.

So what definitely led to this drastic move of firing Stotts even after consecutive playoff appearances? Jason Quick of The Athletic offered his insights, saying that Stotts failed to improve the Blazers’ effort and system on the defensive end of the floor, and failed to bring at least one playoff series win this season.

Stotts was given two clear objectives for this season: Improve the defense and win a playoff series. He failed to reach both. Although Stotts had led Portland to a franchise-record eight consecutive playoff appearances, they had been bounced in the first round in four of the past five seasons, and lack of defense continued to overshadow what had become one of the NBA's most prolific and reliable offenses.

Portland last season was the 27th-ranked defense, and ownership believed the team adequately bolstered their defense with trades for Robert Covington and the signing of free agent Derrick Jones Jr., but Portland this season had the league's second-worst defensive rating.

So what comes next now in terms of the Blazers’ search for a new head coach? Stotts has made his stamp with this team for nine long years, and he is actually the only coach that Damian Lillard has even played for. Stotts may be just one person, but he has been the head of the snake for a while now. Everything in the Blazers’ system is a product of his brain and direction, so this is indeed a huge change for the Blazers moving forward.

The big question now follows: Who will succeed Stotts as the new head coach of this Lillard-led Blazers squad? Lillard inked a massive five-year, $139 million contract that just kicked in this season, which means that he will be under contract for the next four years. So whoever the next coach of this Blazers squad will be, it is without a doubt that that person should be able to maximize what’s left of Lillard’s peak years, and carry the pressure and responsibility of taking this team to greater heights.

There are some rumblings that current Los Angeles Lakers assistant coach Jason Kidd or former NBA champion point guard Chauncey Billups are the frontrunners for the Blazers position, but anything might happen in the near future. According to Bobby Marks of ESPN, this is the first time that the Blazers will be active in pursuing a new head coach since the year of 2012.

When a coach leads a team to the playoffs in eight consecutive seasons, he shouldn't face questions about whether his job is secure. However, as past offseasons have repeatedly taught us, life for a head coach in the NBA is rarely fair. That was proven again when Stotts and the Blazers mutually agreed to part ways one day after Portland's season ended in the first round.

Stotts posted a regular-season winning percentage of .558 and reached the playoffs in all but his first season in Portland, with the team peaking with a conference finals appearance in 2019. However, that was one of just three times under Stotts in which the Blazers advanced beyond the first round, and his 22-39 playoff record will be at the center of the decision to bring him back or send Portland looking for a new coach for the first time since 2012.

As for the Blazers roster, there is no doubt that they have the pieces to contend year in and year out. They have one of the best players in the league in Lillard, and two more borderline All-Stars in shooting guard CJ McCollum and starting big man Jusuf Nurkic. They made some important moves this season, acquiring veteran defensive-minded forward Robert Covington and a promising scoring wing in Norman Powell.

The Blazers are still hoping for more improvement and development from their young talented players such as combo guard Anfernee Simons, combo forward Nassir Little, small forward CJ Elleby, and injured young center Zach Collins. This current roster is already built to contend for a playoff spot, but what are the things that they should improve on if they want to take the next step and finally reach the NBA Finals?

But then again, it is about how the Blazers front office could make Lillard happy, both on the roster front and the coaching front. Lillard already made it known that he is singling out the names of Kidd and Billups as his preferred choices for the team’s next head coach, and the Blazers should at least honor that recommendation. It is not as if Lillard will be making a trade demand anytime soon, but honoring their superstar guard’s request will also tell everyone that this organization is all about winning and making their star players happy and content.

But of course, this is still a very disappointing season for the team. Having a player-recommended coach will not immediately right the ship for the Blazers. As per Royce Young of the ESPN, Lillard pointed out that he and the whole team have to go back to the drawing board and dive deep into what went wrong this season. Lillard said that he was frustrated by the fact that they lost to a Denver Nuggets who were playing without Jamal Murray or Will Barton, two of the team’s best playmakers and scorers. Lillard also emphasized that if they cannot defeat an injury-plagued squad in the first round of the NBA playoffs, then they still do not have the personnel or the system in place that will get them to a coveted trip to the NBA Finals and possibly win a championship.

But the positive takeaway, as what Lillard points out, is that he and the team never made any excuses when they lost. They took the series loss to the Nuggets series with much sportsmanship, and Lillard says that that positive and classy attitude will be important in building a much needed winning culture within and around the Blazers organization.

"I mean, we didn't win a championship, so obviously where we are now isn't good enough. I don't know what a shakeup looks like or what changes will be made or could be made, but obviously as is, it wasn't good enough. We came up  short against a team without their starting point guard and shooting guard (Will Barton and Jamal Murray). ... Obviously, where we are isn't good enough to win  a championship if it's not good enough to get out of a first-round series with two of their best three or four players not on the floor. For our season to end on our home floor is disappointing. That's as far as I am right now. I'm not thinking about none of the other s--- like change or whatever, man. We'll see what happens, but I haven't even thought that far out.

We didn't make excuses and we still don't make excuses. Disappointing ending, this isn't what we wanted, but we don't hang our heads. Just came up short. We didn't do what was necessary to win a series and gotta keep fighting, keep working and keep coming back to battle. Regardless of how it ended, we're always going to have our heads held high, have class and go about it like real warriors. We lost, they were the better team, congratulations to them. It's back   to the drawing board for us.”

Lillard, who will turn 31 years of age next month, put up another tremendous performance this season with an all-around stat line of 28.8 points, 4.2 rebounds, 7.5 assists and 0.9 steals per contest. He also shot an efficient set of shooting percentages by producing a 45% overall clip from the field, a stellar 39% clip from the three-point line, and an excellent 92% clip from the free throw line.

But it was when the stakes are higher that Lillard would turn it up a notch and step up to the spotlight. The six-time All-Star point guard normed playoff career-highs of 34.3 points and 10.2 assists, on top of his 4.3 rebounds and 1.0 steals per contest. Lillard also shot a 46% overall clip from the field, an astounding 44% clip from beyond the arc, and a highly efficient 94% clip from the free throw line.

Aside from being a multiple-time All-Star player, Lillard has also made it to the All-NBA team five times in his career, and won the 2012-13 NBA Rookie of the Year award.