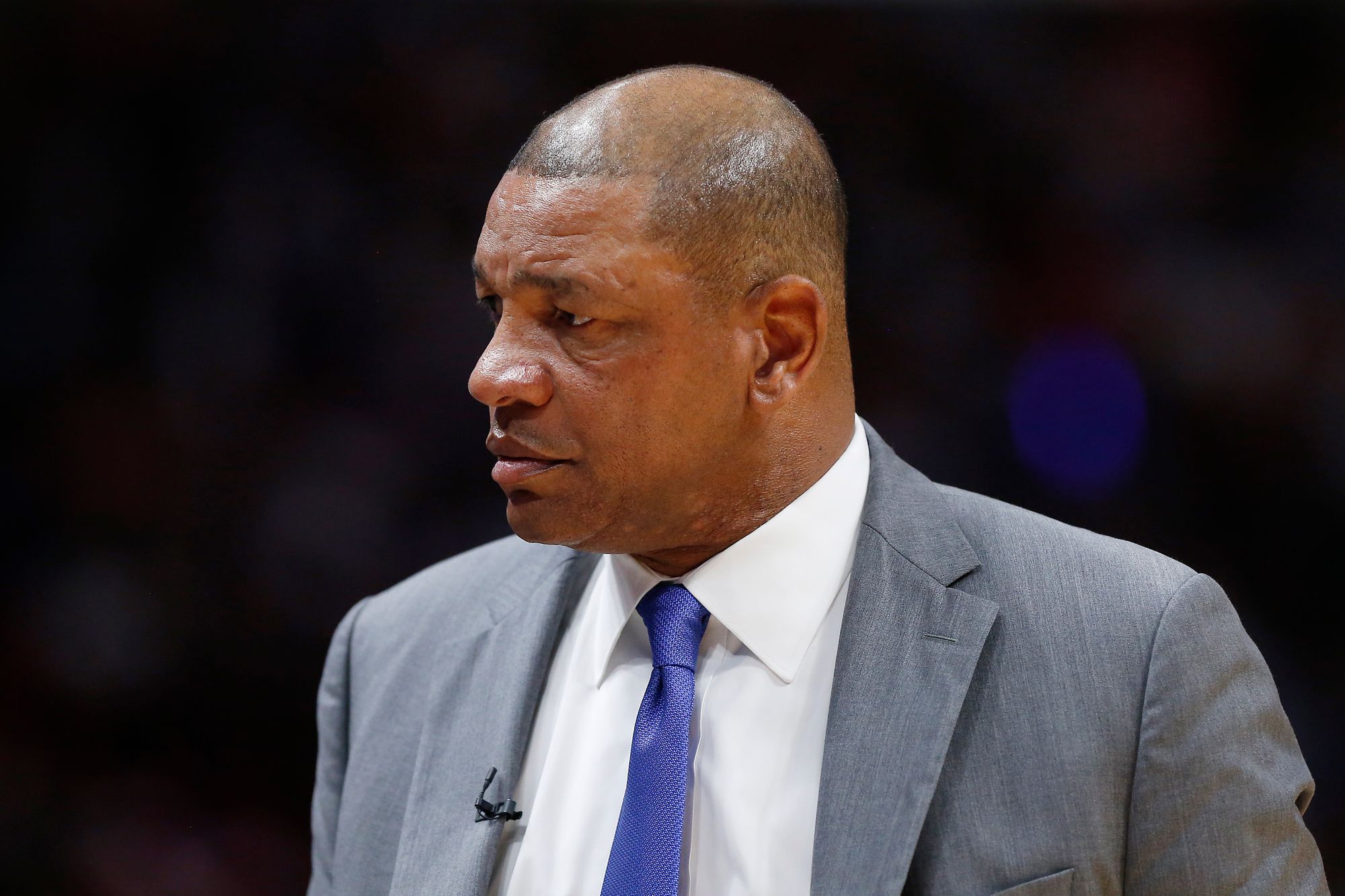 Former Los Angeles Clippers head coach Doc Rivers did not find himself jobless for too long, as reports revealed that he has already found a new home. It took just three days for the 58-year-old coach to get a new job after he was fired the by the Clippers following their disappointing exit in the 2020 NBA Playoffs.

According to Adrian Wojnarowski of ESPN, who first reported the hiring, Rivers agreed to a five-year deal to lead the Philadelphia 76ers starting next season. The 76ers have been searching for a new coach after they let go after Brett Brown, who failed to lead Philadelphia past the first round in this year's playoffs.

Shortly after the Clippers announced that they have mutually agreed to part ways with Rivers, the 76ers reportedly called the one-time champion coach to gauge his interest in their coaching vacancy. Rivers immediately overtook Mike D'Antoni, who was reportedly the leading candidate to take toe 76ers job before Rivers became available. Wojnarowski said that Rivers and the 76ers front office did not find it hard to strike a deal.

"Sixers general manager Elton Brand on Monday reached out to Rivers and his agent, Lonnie Cooper, to gauge interest in the Sixers job," Wojnarowski said of the events leading to Rivers' hiring. "Rivers soon was on a flight to Philadelphia, where meetings on Wednesday with Brand, owners Josh Harris and David Blitzer had the sides moving quickly toward negotiating a multiyear deal."

Although the 76ers failed to hit expectations in the past two seasons, Rivers was reportedly intrigued with the current roster of Philadelphia. The team will continue to build their roster around All-Stars Ben Simmons and Joel Embiid. Both Simmons and Embiid were mentioned in trade rumors right after their playoff exit, but Brand has already made it clear that he will not trade either of the two.

Rivers will also be reunited with Tobias Harris, who failed to make significant impact for the 76ers last season. Harris had the best years of his career playing under Rivers. During 2017-18 season, the 28-year-old forward averaged a then-career-high 19.3 points in 32 games. His production increased in the following season, as he posted 20.9 points on 49.6 percent shooting from the field before he was dealt to the 76ers.

Golden State Warriors head coach Steve Kerr did not hide his happiness after Rivers immediately found a new home. Shortly after the Clippers' decision to move on from Rivers, Kerr told NBC Sports that the news "felt like a gut punch" to him and his coaching staff. He lauded Rivers for being a strong voice in the league, which was proven by the praises he received from fellow coaches and players when the veteran coach was still inside the NBA bubble.

"I'm excited for Doc and for the Sixers," Kerr said of Rivers, who holds 943 career wins as a head coach. "He's a great coach, and as I mentioned the other day, great for the league. So I'm happy that he's quickly back in the NBA. He's important for the league and for the rest of the coaches."

Clippers assistant Tyronn Lue was previously considered as a strong candidate for the 76ers vacancy. But now that the 76ers have found their man, it appears that Lue will likely be on his way to being promoted as the head coach of the Clippers. Wojnarowski revealed that the Clippers will start their coaching search soon, and said the Lue is emerging as a "strong candidate" for the job.

According to Dan Feldman of NBC Sports, hiring Lue makes a lot of sense of the Clippers. The former Cleveland Cavaliers head coach has championship experience, after leading the LeBron James-led Cavs to a title in 2016. He also helped the Cavaliers advance to the NBA Finals for four consecutive seasons. Not only that, Feldman thinks that Lue is the perfect solution to the Clippers' chemistry issues.

"Lue would be a sensible hire," Feldman said. "He has championship experience, which would help the Clippers hit the ground running in a make-or-break season before Kawhi Leonard and Paul George can become unrestricted free agents. Lue managed stars in LeBron James and Kyrie Irving. The Clippers must improve their chemistry around their stars. And the last time Lue got promoted from assistant to head coach, his team won a title."

The Lue-to-Clippers scenario is not set in stone, though, because the one-time champion coach is also said to be a strong candidate for the New Orleans Pelicans coaching job. The Pelicans remain a strong threat because of their promising roster led by 2019 first overall pick Zion Williamson.

Lue also has a relationship with Pelicans executive vice president of basketball operations David Griffin. Griffin was the general manager of the Cavaliers when Lue rose to the ranks in Cleveland. However, Feldman thinks that the Clippers are in the driver seat because they are "closer to championship contention" and team owner Steve Ballmer have the money to outbid any interested teams.

Aside from Lue, former New York Knicks and Houston Rockets head coach Jeff Van Gundy is also being mentioned as a possible candidate for the Clippers job. Dwight James of Yahoo Sports believes that if Ballmer is too pick between Lue and Van Gundy, he will likely go with Van Gundy. And for Van Gundy, the Clippers job would be too attractive to pass up despite previously resisting offers to return to the bench.

"He has resisted attempts to draw him out of coaching retirement on other occasions," James said. "But it’s possible that Ballmer could make just about anyone an offer they couldn’t refuse. And Van Gundy would likely be coaching the most talented roster he’s ever had. Tyronn Lue has been listed by many as a favorite for the job, but I’m not certain he is the most glamorous choice for Ballmer, who might want to make a splash worthy of Tinseltown."

Kyrie Irving Thinks the Brooklyn Nets Have No "Head Coach"

The Brooklyn Nets made the most surprising moves this year in the NBA, when they hired former NBA Most Valuable Player Steve Nash as their new head coach. While has Nash has built a strong reputation as a player, the hiring sent shockwaves to the entire league because there were no reports about his interest in moving to coaching.

Talking about his new coach, Nets superstar Kyrie Irving said that he has a great relationship with Nash and he expects to make it grow in their years together in Brooklyn. But interestingly, Irving thinks that they do not have a real "head coach" because it would be a collaborative effort between their coaches and the players, including him and superstar teammate Kevin Durant.

Nevertheless, Irving is looking forward to playing for Nash, who had no coaching experience prior to accepting the Nets coaching job. While Nash is inexperienced when it comes to leading a team from the bench, Irving has no doubts that Nash would be an excellent coach because he knows how to co-exist with his players.

"We always hear how great Nash was or saw how great Nash was as a player, but  when you know him as a person, you understand why he can co-exist with us," Irving added. "We don’t need someone to come in and put their coaching philosophy on everything that we’re doing and change up the wheel. It’s just like, ‘No.’ I need somebody that’s going to understand that I am a human being first. I serve my community and where I come from first."

Irving also addressed reports, which suggested that he and Durant had a hand in the firing of former Nets head coach Kenny Atkinson. Brooklyn's decision to let go of Atkinson received mixed reactions with most experts criticizing the move. Atkinson is being credited for turning the Nets from cellar-dwellers to playoff contenders. Irving insisted that they had nothing to do with Atkinson's dismissal.

"I want to give a shoutout to Kenny Atkinson because some people came out and said Ky and KD got Kenny fired," Irving said. "That was completely false. Kenny was great for the group that he served, and I was very appreciative of what he was giving us throughout the season when we were playing."

Atkinson is still available in the market, as was previously mentioned as a candidate for the Chicago Bulls coaching job before they hired Billy Donovan. Atkinson's interim replacement Jacque Vaughn opted to remain in Brooklyn as Nash's lead assistant and is reportedly now one of the highest-paid assistant coaches in the league.