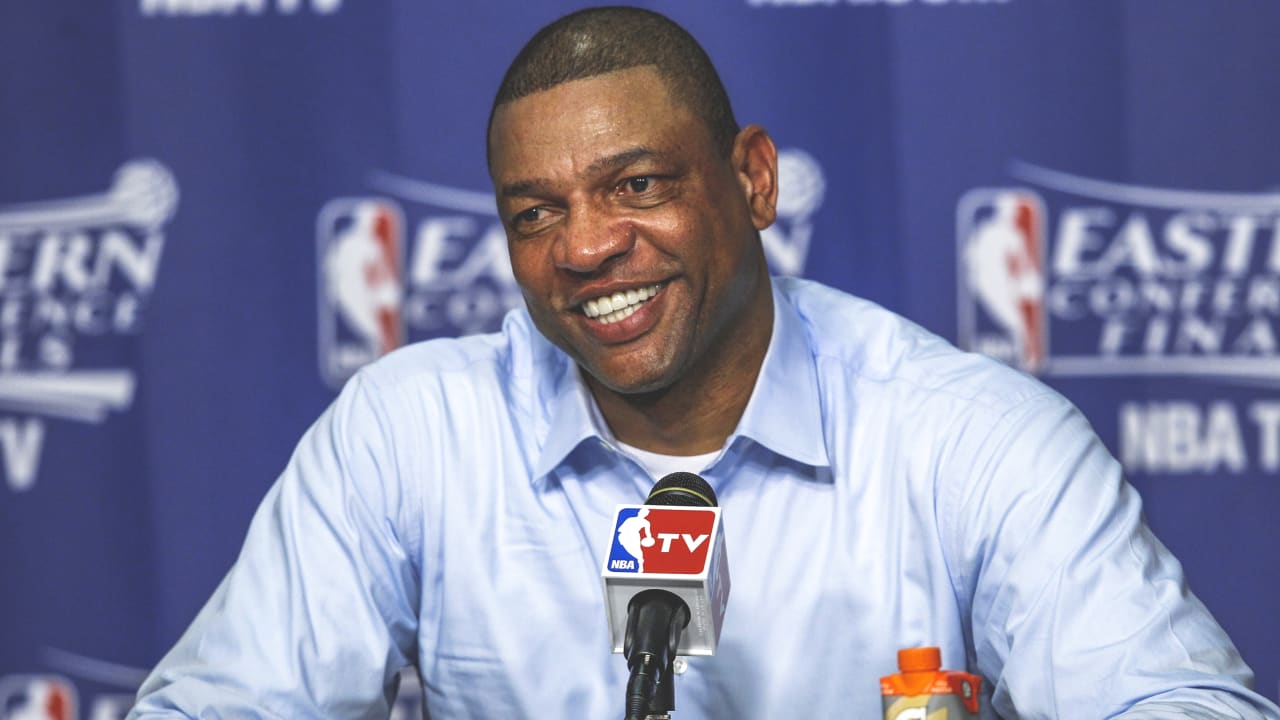 The Los Angeles Clippers looked ready to have another run with Doc Rivers at the helm despite their failed title campaign this season. But in a sudden turn of events, the Clippers, led by team owner Steve Ballmer, opted to go into a different direction and made a bold move by firing Rivers. However, it did not take long for Rivers to find a new home, as he accepted to lead the Philadelphia 76ers just three days after losing his job in Los Angeles.

During his introduction as the new head coach of the 76ers, Rivers admitted that he contemplated taking a break from coaching following his disappointing year with the Clippers. However, right after the news of his sacking spread like a wildfire, the veteran head coach revealed that at least three teams called his agent to gauge his interest in coaching the franchise. Rivers wanted to take at least a day of break, as he wanted to make the right decision.

"I love coaching. I absolutely love it," Rivers said of getting back to bench again next season after his firing via ESPN. "But I was not going to just coach anybody, I can tell you that. I was ready to take a break ... it just depended on the team that was available, and if that team in my opinion was ready to win."

And when he learned that the 76ers are interested in naming him as their next head coach, Rivers said that it was an easy decision to fly to Philadelphia to sit down with the team's front office. He said that he was thrilled with handling a young team led by rising stars like Joel Embiid and Ben Simmons, who are still reaching the peak of their respective careers. He said that the 76ers job was an opportunity that he "just couldn't turn down" at all.

Rivers said that while the 76ers underachieved this season after getting swept in the first round by the Boston Celtics, he believes that the team is oozing with talent. He addressed questions about making the tandem of Embiid and Simmons work, pointing out that the duo has proven that they can be effective together after winning 65 percent of games where they both played.

The one-time champion is excited to work with Embiid, who is considered as one of the best big men in the league. Rivers is no stranger to coaching an elite big man, having coached Kevin Garnett and DeAndre Jordan earlier in his coaching career with the Boston Celtics and the Clippers. He feels that Embiid has all the qualities a current-generation big man in the NBA should have in his arsenal.

"In this generation, that level has changed even more now that they're out shooting 3s and, in some cases, even running the offenses of teams," Rivers said of how the center position has changed in the past several years. "I think Joel can do all those things. Watching him on film the last couple days is exciting, I can tell you that. I remember a game, I think it was three years ago, in L.A. that he came in and had a dominant performance. I think he is a dominant big man, and will be a dominant big man for   me."

The 58-year-old coach also expressed confidence on Simmons. One knack on Simmons game is his lack of outside shooting, but Rivers sounded like he is not concerned at all. Rivers pointed out that Simmons is still young and would have a lot of things that he can work on. But at this point of his young career, Rivers thinks that the former first-overall pick would be a valuable piece of his team in Philadelphia.

"Ben has proven that he's a guy that can create scoring whether that's him doing it or him creating scoring for anyone else on the team. But this is what I know about Ben: He's an All-Star, he's an all-defensive player," Rivers said of Simmons. "Listen, he's young. And I'm sure there are things that we're going to work on and get him better at and get him better at attacking."

Embiid averaged 23.0 points and 11.6 rebounds this season, while Simmons posted 16.4 points on top of 8.0 assists and 7.8 rebounds per game. Following their exit in the playoffs, there were talks about the possibility of breaking the tandem, but 76ers general manager reiterated that he will not trade either of the two. Instead, he'll build the roster around Simmons and Embiid, and find the right mix for them.

Meanwhile, Rivers admitted that he has yet to move on from the disappointing end of his tenure with the Clippers. The Clippers were considered as heavy favorites to win the title this season after they secured the services of free-agent superstar Kawhi Leonard and trade for superstar Paul George. The Clippers surrounded them with valuable role players, who can excel on both ends of the floor, which made them an easy pick to win it all.

The Clippers struggled early in the playoffs, as they needed six games to dispatch the Luka Doncic-led Dallas Mavericks, who played without Kristaps Porzingis for the majority of the series. In the second round of the playoffs against the Denver Nuggets, the Clippers looked deadly, as they blew past the Nuggets in Game 1 of the series, and eventually took a 3-1 lead.

In Game 5 of the Western Conference semis, the Clippers looked on their way to advancing to the next round after building a 15-point lead. However, they blew the lead and the Nuggets extended the series. In Game 6, the Clippers were in control again but collapsed in the second half. The Nuggets gained a lot of confidence from the two big wins, and eventually completed the upset with a blowout win in Game 7 -- a loss that Rivers will not easily forget.

"I'm always a guy that looks forward. I think you have to keep it going and keep moving. As far as what went wrong, we had a 3-1 lead and didn't [win]. I love that we got up 3-1. It tells us that we're doing something great. What I didn't like is we didn't close. That's something that I do evaluate and look at, and it's something that'll bother me for a long time until we win here," Rivers admitted via Sports   Illustrated.

Following the loss, Rivers and Ballmer mutually agreed to part ways. According to Los Angeles Times, Ballmer was disappointed of how the team failed to live up to expectations despite the upgrades that they made. The Clippers are reportedly looking for a coach "innovative enough" to get the most out of their deep roster. Recent reports indicated that the current Clippers assistant coach Tyronn Lue is a strong candidate to replace Rivers in Los Angeles.

The Houston Rockets are also searching for a new coach following the decision of former head coach Mike D'Antoni to seek other opportunities. The Rockets have been linked to several coaching candidates, but a new has floated around on Monday. According to Marc Stein of the New York Times, the Rockets are considering John Lucas for their coaching vacancy mainly because of his relationship with superstars James Harden and Russell Westbrook.

"John Lucas is an emerging candidate in the Rockets' search for a new head coach, league sources say," Stein posted on Twitter. "Lucas served as the Rockets' player development coach on Mike D'Antoni's staff for the past four seasons and has strong working relationships with Rockets star guards James Harden and Russell Westbrook."

Lucas might emerge as the strongest candidate for the Rockets because of his familiarity with the current roster, and how the team wants to play. The Rockets were one of most unconventional teams this season, as they opted to play without a legitimate center. Houston managed to advance to the second round of the 2020 NBA Playoffs, but they struggled to keep up with the Los Angeles Lakers, losing the series in five games.

The 66-year-old coach is no stranger to leading a team despite being mostly an assistant coach since 2003. He was the head coach of the San Antonio Spurs from 1992-1994, the Philadelphia 76ers from 1994-1996, and the Cleveland Cavaliers from 2001-2003. His final year in Cleveland did not go well, but it led to the franchise getting the first overall pick in the 2003 NBA Draft, where they selected LeBron James.

Aside from Lucas, Tyronn Lue and fellow Clippers assistant coach Sam Cassell were mentioned as strong candidates to replace D'Antoni. Cassell also has a relationship within the franchise, as he was part of their two championships in the 90s. Adrian Wojnarowski of ESPN recently reported that Minnesota Timberwolves associated head coach David Vanterpool will also get an interview for the Rockets coaching position.

Vanterpool, who was an assistant to Terry Stotts before he moved to Minnesota, has received strong support from Portland Trail Blazers stars Damian Lillard and CJ McCollum. Lillard said that teams who are doing a coaching search would make a mistake if they do not hire Vanterpool. McCollum added that "it's only a matter of time" before the 47-year-old becomes a head coach in the league.