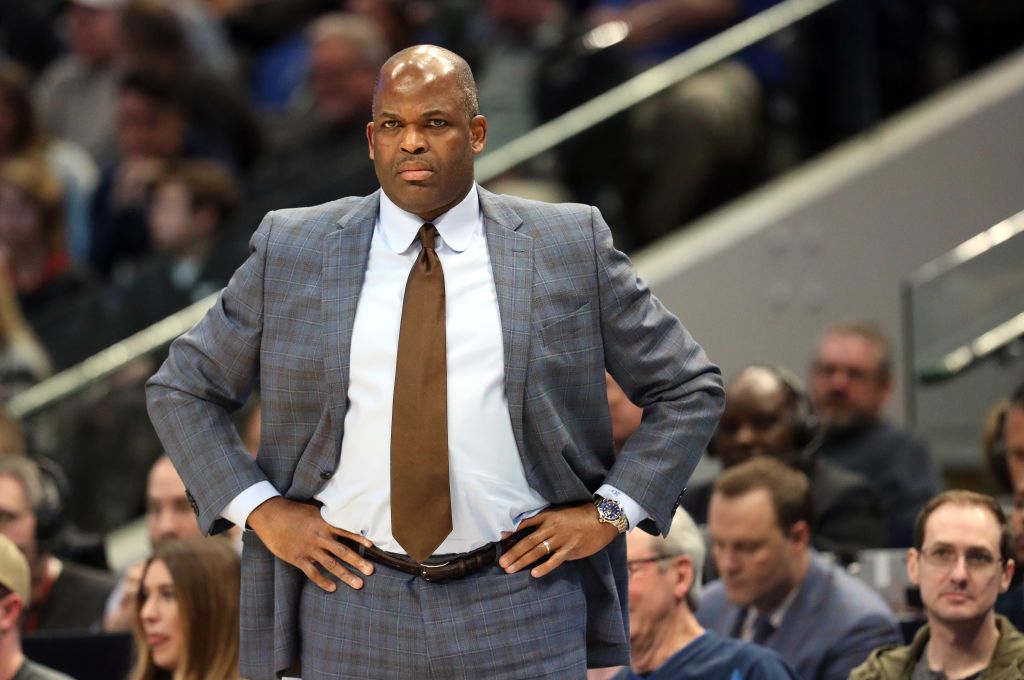 After the Indiana Pacers surprisingly fired him after they lost to the Miami Heat in the first round of the 2020 NBA Playoffs, Nate McMillan found a new home when the Atlanta Hawks hired him as their assistant coach. But with the Hawks still not having much collective success under young head coach Lloyd Pierce, the team decided to part ways with him, then promoted McMillan to the top coaching role.

That move turned out to be a very wise decision as the Hawks have compiled an excellent record of 18 wins against only 7 defeats since McMillan took over the head coach position. There is no doubt that McMillan has been thriving in his role as the Hawks are now finding themselves in the 5th spot in the Eastern Conference standings, sporting an overall win-loss slate of 32 wins against 27 defeats.

On top of that, they are above other serious contenders in the East such as the Boston Celtics and the Miami Heat. The Hawks are currently ranked 11thin total points per game, 8th in total rebounds per contest, and 5thin the league in overall free throw percentage. They are just seated a rank below the top half of the league in holding opponent points per game, so it is definitely on the defensive end that they still need more adjustments and improvements.

As per Jeff Schultz of The Athletic, McMillan emphasized that eventually nabbing the head coaching role did not enter his mind when he first committed to being an assistant coach for Pierce’s Hawks squad. McMillan also reiterated that his first message to his players upon assuming the head coaching role was for them to take it upon themselves to be better on both ends of the floor.

“I wouldn’t have come down here if I didn’t think he could coach and he could help the organization take the next step. My focus was to assist him, not to be viewed as the No. 1 guy. I didn’t want that. … I’ve been in his shoes. I was in his shoes last year with the Pacers. I was saying the same things he was saying. He was talking about taking the next step and getting to the playoffs. I was talking about taking the next step and winning the first round. And I’ve had young teams before, and I know it’s tough.

The first time we spoke, we talked about what happened and what needed to happen and what happened was a coach was just let go. Lloyd basically took the hit for the team not performing. So no one needs to point fingers at anyone. Everybody needs to point the fingers at themselves about what they can do better. That’s coaches and players included. That was my message to the team: You need to do better. Because Lloyd took the hit for all of us. I know that goes with the territory. But you need to look at yourself and see what you’re going to do about that.”

This is not the first time that McMillan has assumed a head coaching role in the NBA. McMillan started his coaching career in the league via an assistant coach position for the Seattle Supersonics in 1999. After just a year, the Sonics eventually promoted McMillan to the top coaching role. McMillan was just 36 years of age back then, and he led the Sonics to a 38-29 record in his first go-around as their coach.

In 2005, McMillan then moved to the Portland Trail Blazers, but he did not immediately found success there. He and the Blazers actually started on the wrong foot as they compiled a lowly record of 21 wins against 61 defeats in their first season together. But with a solid core in place in the form of Brandon Roy and LaMarcus Aldridge, McMillan and the Blazers eventually put up an excellent record of 54 wins against 28 defeats during the 2008-09 season.

After his long tenure with the Blazers, McMillan took a one year of leave from the NBA before returning to the league to become the associate head coach for the Indiana Pacers in 2013. After three seasons, he was again promoted to the top coaching role, and assumed that role for the Pacers for four seasons.

Now that he is coaching a very young Hawks team, McMillan knows that the only way for him to be successful is to be just himself. The veteran head coach says that while it is very difficult to teach his players a brand new system at the middle of a season, McMillan reiterated that his players are actually doing well in terms of adapting to the tweaks and additions that he put forth in the team’s system on both ends of the floor.

McMillan also emphasized that he is not yet looking forward to re-signing with the Hawks as their head coach. He says that it is a decision that the Hawks front office will have to make, and that he is just focused on bringing this very young Hawks team to the more important games in the playoffs where they have the chance to make some noise and surprise a lot of teams.

“All I know is, I’m being me. When I took over in Seattle and got my first coaching job, I got letters from Mike Fratello and Lenny Wilkens, and the message from them was, ‘Be yourself and coach what you know.’ That’s one of the things I talked to Lloyd about. Don’t try to be someone you’re not because the players will catch on to that, and that’s all I’ve done. I haven’t come in with a magic wand. It’s really difficult to change a lot in the middle of the season so we’re doing a lot of what we’ve been doing. Certainly, we’re doing it a little bit better. We’ve tweaked some things, added some things. But it’s hard for me to change a lot and get my system in place in the middle of the season. But the focus in what we’re doing is better.

That’s a decision that the organization will have to make. I think that’s the approach for them because we haven’t done anything in the sense of talking about negotiations. The focus when I took over was: We want you to try to get to the playoffs. That’s pretty much the last conversation I had with them about this season. So I got the message. Nothing has been offered to me.”

As for the Hawks, there is just no doubt that they still have a lot of work left to do. If they indeed book a coveted ticket to the playoffs this season, they will be one of the youngest and most inexperienced teams among a pack of other elite superstars and veteran squads.

All-Star point guard Trae Young will be the one leading the way as he is currently putting a tremendous stat line of 25.3 points, 3.9 rebounds, 9.6 assists and 0.9 steals per contest. However, Trae’s shooting percentages definitely need more improvement as he is only producing a 42% overall clip from the field, including 35% from the three-point line.

But of course, it is not just Trae who will steer this Hawks team to a potential deep run in the playoffs. The Hawks are also looking forward to the impact that combo wing stalwart Bogdan Bogdanovic can bring in the playoffs. Even though Bogdanovic is not experienced yet in the playoffs, he is already one of the elder statesmen in this team. The 28-year old long-range gunner is logging in 28.4 minutes per contest, while putting up averages of 14.5 points, 3.7 rebounds, 3.0 assists and 0.9 steals.

Bogdanovic admits that he struggled during his first couple of months with the Hawks this season, but he also emphasized that McMillan’s more structured system helped him bounce back in a big way. As per Chris Kirschner of The Athletic, Bogdanovic said that McMillan is more inclined on getting everyone involved and running more plays on the offensive end of the floor.

“I can tell a difference. They’re using me differently, as you can see during the games. We have more plays running. Nate is trying to get everyone involved. With Lloyd, it was kind of more of a free game. He was running stuff with lots of freedom. Nate is a little bit old school and more experienced, and he knows what can get us to the next level.

He doesn’t want any selfish game. He told us he wanted more ball movement and how we’re all pros and how we didn’t need to mess with the game, respect the game and let the game come to you. He told us how we all needed to be ready to compete every single night. Nate is also more experienced. He’s been in the league since he’s been a player and then went into coaching right after his playing career. He’s been in the league forever and knows what he’s doing. I trust him.”

However, the Hawks have recently suffered a minor setback due to the ankle injury that Trae Young has sustained in their previous game. It is being reported that the young star will miss the team’s next couple of games, which happen to be two very important contests against the Miami Heat and the Milwaukee Bucks.

Young sustained the injury with a little over a minute left in the third quarter of the Hawks’ game against Julius Randle and the New York Knicks. He shot his usual effective floater down the lane, but he twisted his left ankle as he landed. It is with a heavy sigh of relief X-rays on Young’s injured ankle turned out to be negative, which means that he did not suffer a major setback.

With Young sustaining his All-Star caliber performance this season, the Hawks are in a position to enter the playoffs. Aside from his elite multi-dimensional skill set in terms of scoring, Young is also focusing on always involving his teammates and helping them become better players. Young emphasized the importance of getting his teammates going so that they already have a solid feel on their shots when the game reaches its crucial stages in the decisive fourth quarter.

Young also emphasized that he is not too focused on his scoring anymore, just like he did in the past couple of years.

I don’t know. I don’t know. I got some other guys who can really shoot the ball. I’m still shooting my floaters and still doing all of that. I’m still one of the top guys in the league in assists. I don’t care about shooting 3s and all of that stuff. If I get open 3s, I’m gonna shoot them. If I find gaps in lanes, I’m going to attack them. That’s kind of how it is. I don’t really play numbers or percentages or how many 3s I take. I don’t focus on all of that. I just focus on making the right play.”

After their recent overtime loss to Julius Randle and the New York Knicks, the Hawks will go up against Jimmy Butler and the Miami Heat, followed by a contest against reigning back to back MVP Giannis Antetokounmpo and the Milwaukee Bucks.

The Hawks will then embark on a tough three-game road trip that will feature games against Jerami Grant and the Detroit Pistons, then a mini two-game series against leading MVP candidate Joel Embiid and the impressive Philadelphia 76ers.