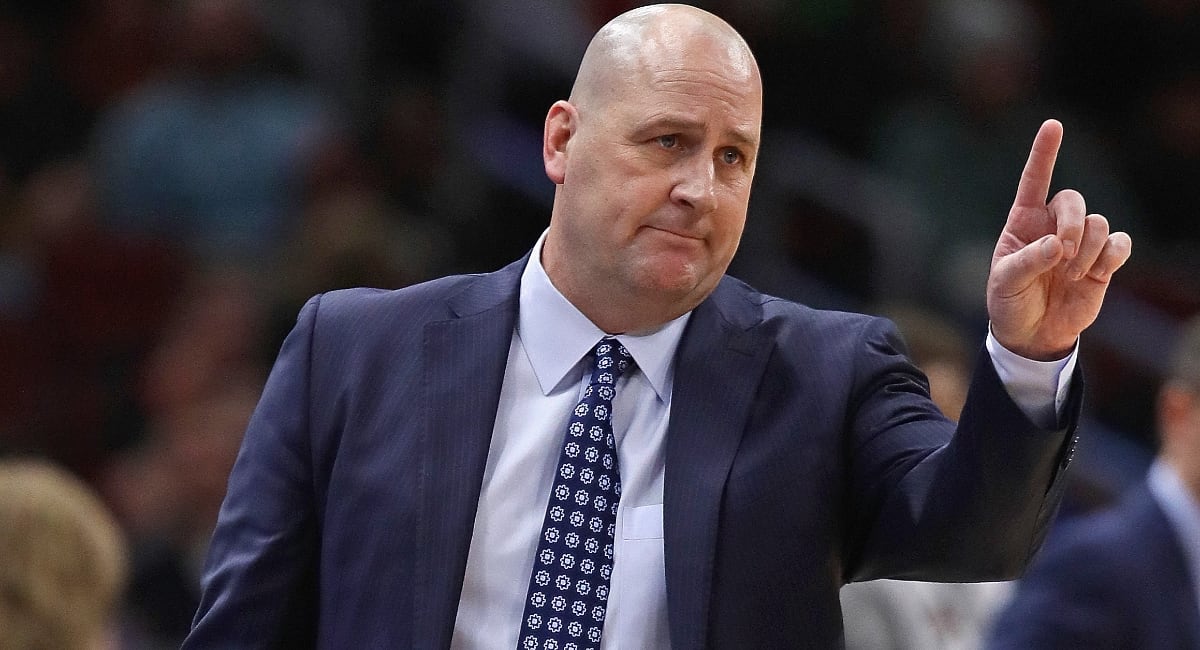 The Chicago Bulls made a front-office shakeup, and fans expected the head coach Jim Boylen would be on his way out as well. Fans were also calling for the firing of Boylen, but it appears they are unlikely to get their wish.

The Bulls hired Arturas Karnisovas as executive vice president and Marc Eversley as general manager. Karnisovas reportedly received negative feedback about Boylen from key players, which placed him in the position of moving on from the embattled coach. However, Boylen might get at least one more season because of financial reasons.

"There is growing thought that financial concerns the Reinsdorfs have about the 2020-21 season will keep Boylen and most of his staff on the Bulls’ bench," Joe Cowley of Chicago Sun-Timesrevealed. "It seems the 'players first' motto Karnisovas and general manager Marc Eversley were touting several months ago will be pushed aside by money. That would be a small slap to several Bulls players and a large slap to a vocal Bulls fan base."

The revelation gave some light on the seemingly slow process of evaluating the coaching staff. Just a few weeks ago, reports surfaced that the Bulls are already planning to make a run at several coaching candidates like 76ers assistant coach Ime Udoka and Raptors assistant coach Adrian Griffin.

Sources added that the opinion of the fans will not be a huge factor because of the uncertain scenarios for next season. It remains to be seen if fans will be allowed to watch the games inside the arena next season. If the NBA decides to play in an empty arena, the owners won't need to worry about the displeasure of the fan base.

"As far as upsetting the fan base even more? Jerry Reinsdorf never has cared what fans say on talk radio, on social media, or in their own houses. Empty seats catch his attention. But if the NBA doesn’t allow fans in arenas next season, there will be no empty seats to count and no boos to hear," Cowley added.

Boylen is also reportedly confident that he will keep his job and he is optimistic that he will be able to prove that he is worthy of the position. In an interview with Jack Doles of WOOD-TV, the 55-year-old coach believes that he is forming a good relationship with Karnisovas and Eversley.

"I think they understand where we were, what we're trying to get to," Boylen said. "They've been very supportive and collaborative. It's a process to build this team into what it can be. I just like the fact that we have a relationship already. It's never perfect. Nothing's perfect. You just work at it. Tell the truth. You get your guys to play hard."

It remains to be seen whether or not the Reinsdorfs will keep Boylen in the long run despite the negative comments from players. Bulls young stars Zach LaVine and Lauri Markkanen have reportedly voiced their issues with their coach. Boylen's scheme on both ends of the floor is also being tagged as the reason for the Markkanen's failure to make a big leap this season -- his third in the league.

Markkanen, the seventh overall pick in the 2017 NBA Draft, was expected to have a breakout year after averaging 18.7 points and 9.0 rebounds per game last season. However, the former Arizona standout took a step back, posting just 14.7 points on top of 6.3 rebounds per game, which is almost similar to his numbers as a rookie.

Morten Jensen of Forbes recently reported that keeping Boylen would bring more harm to the Bulls. He pointed out that his rocky relationship with his players would hurt their chances of signing free agents in the future. He added that Boylen's presence would lead to diminished fan interest and failure to get respect within the league.

Former Golden State Warriors head coach Mark Jackson has made it no secret that he wants to coach again. The 55-year-old has not coached in the NBA since he was fired in 2014 despite leading the Warriors in two playoff appearances in his three seasons at the helm.

Jackson was recently mentioned again as a possible option for the New York Knicks but he did not get a chance to make a case for himself. The Knicks hired former Bulls and Minnesota Timberwolves head coach Tom Thibodeau without interviewing Jackson for the job.

Knicks fans were voicing out their support for Jackson, and former NBA player Jalen Rose also had nothing but praises for the former Warriors coach. He said that if he was to decide, he would have Jackson on top of his list of possible coaches for the Knicks followed by Kidd. Jackson appreciated the support and also confirmed that he is very eager to coach again in the NBA.

"I appreciated the love from the Knicks fans and Jalen Rose’s opinion," Jackson said via ESPN. "I truly look forward to having the opportunity to coach again. I had a blast at Golden State, built incredible relationships that will last a lifetime and I look forward to the challenge of coaching again."

Jackson is being mentioned as a possible candidate for the Nets head-coaching job. The Nets fired Kenny Atkinson earlier in the season, but it remains to be seen whether or not they will settle for interim coach Jacque Vaughn.

However, Brad Botkin of CBS Sports believes that there is a growing belief that Jackson has little to no room for improvement, which is hurting his chances of getting another coaching gig. There were questions about the way we handled his players and his failure to develop a good relationship with the front office and his assistants.

"Jackson was beloved for allowing his players the opportunity to learn through their mistakes, apply those lessons, and become better for the process," Botkin said. "But he's yet to get the chance to do that for himself. He's been open that he wants that chance. But it can't happen until some team decides that he deserves it."

In three seasons with the Warriors, Jackson compiled a 121-109 record. After he was booted out of the Bay Area, the Warriors won a championship under first-year head coach Steve Kerr.

Thibodeau's hiring has received mixed reactions, but former players of the veteran head coach and colleagues in the coaching circle are convinced that Thibs deserves the job. For Fizdale, Thibodeau would be a great fit for the young Knicks squad because of his toughness.

Most fans saw the Thibodeau hiring coming because he has developed a good relationship with Knicks president Leon Rose when the latter was still an agent. New Knicks senior vice president William Wesley is also connected to Thibodeau, while general manager Scott Perry was reportedly blown away by Thibs during the interviews.

Thibodeau inherited a young roster led by budding star Mitchell Robinson and RJ Barrett, the third pick in the 2019 NBA Draft. It remains to be seen whether or not the Knicks will immediately overhaul their roster in the offseason, or wait until several superstars hit the free-agency market in 2021.

Rose, who is also in his first year as the Knicks president, also added Mike Woodson to the coaching staff. Mike Miller, who served as interim coach this season, is also expected to be retained. Fizdale believes that signing Woodson was also a good decision because the veteran coach has experienced coaching in New York.

The Knicks have nothing to go but up with Thibodeau at the helm. Perry has placed the Knicks in a good position to acquire key players either in the draft or free agency. New York had a chance to add two max players last year, but their main targets -- Kyrie Irving and Kevin Durant -- opted to sign with the Brooklyn Nets.

After failing to land top free agents last offseason, Perry and the Knicks decided to sign free agents on short-term deals to keep their cap flexibility. It is also worth noting that the Knicks have seven first-round picks in the next four drafts, which they can use to acquire promising young players or use as trade baits for marquee players.