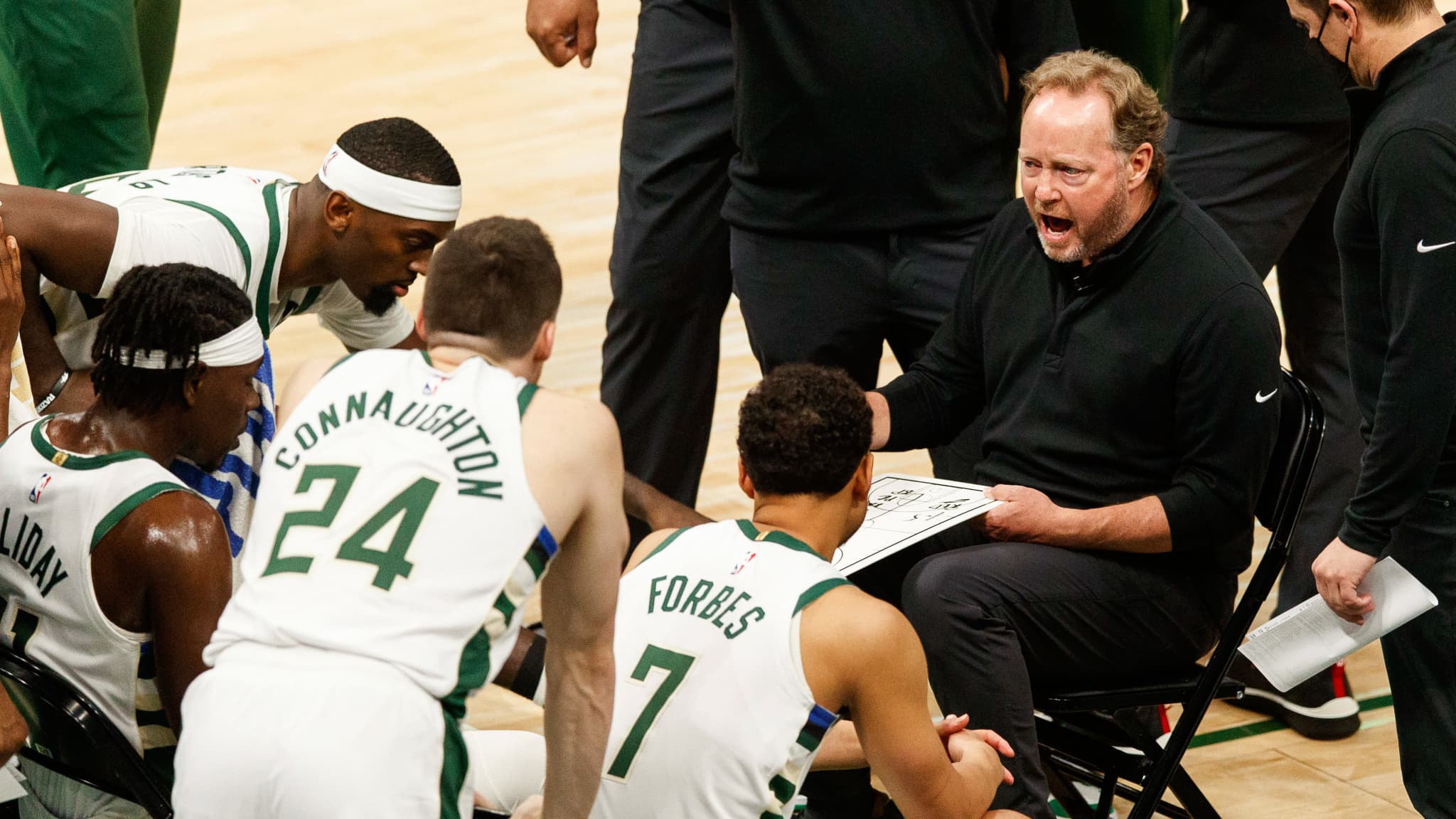 After a successful championship run during the 2020-21 NBA season, head coach Mike Budenholzer has landed a multi-year contract extension with the Milwaukee Bucks. Budenholzer has been with the team for three seasons, and they finally won the elusive and coveted Larry O’Brien championship trophy by beating Chris Paul, Devin Booker, Deandre Ayton and the Phoenix Suns during the 2021 NBA Finals.

Senior NBA Insider Adrian Wojnarowski reported about the interesting development, saying that Budenholzer will now be with the Bucks until the 2024-25 season. Wojnarowski would also point out that Budenholzer was about to enter the final year of his current contract next season. If the Bucks did not win the championship last season, there could have been a huge chance that the team will fire Budenholzer heading into their next campaign. The Bucks embarrassingly lost to the Miami Heat in the second round of the 2020 NBA Playoffs, and it was obvious right there and then that the jury was already on Budenholzer last season.

As per an official article by the Bucks via NBA.com, Budenholzer took the time to express his gratitude to the entirety of the Bucks front office, singling out team owners Marc Lasry, Wes Edens, and Jamie Dinan, along with team general manager Jon Horst. Budenholzer said that his appreciation of the organization is definitely at the highest level as he now starts or continues a brand new chapter in his stint as head coach of the Bucks.

“The appreciation I have for being a part of the Bucks organization is hard to express,” Budenholzer said. “And today, to realize that Marc and Wes and Jamie from our ownership group, along with Jon as our GM, have extended my contract to be the head coach is very special -- thank you!

“The players make the success happen on and off the court. We have the best players and to them I am grateful. They’ve grown and we’ve grown together during the last three seasons. We’ve had success along the way, finishing with an NBA Championship this season! The assistant coaches’ efforts and contributions to our success has been so vital also. Each of them individually are so important to me, and collectively they make so much good happen for me and our players. We all can’t wait to get back to work and face the great challenge of competing again for an NBA Championship. Again, being a part of the Bucks organization is very special. Let’s keep getting better and building great teams and doing great work on and off the court. Let’s go Bucks!!!”

Budenholzer has been a prominent figure in the NBA coaching field for some time now. He first got into coaching in the NBA when the San Antonio Spurs brought him in as an assistant coach during the 1996-97 NBA season. He would have a long career there, learning from head coach Gregg Popovich, who is obviously one of the best basketball tacticians in the world. Budenholzer stayed with the Spurs until the 2012-13 NBA season.

In the summer of 2013, Budenholzer would finally receive the opportunity to be a head coach when the Atlanta Hawks hired him. He did not have the right tools on the roster in that first season as the Hawks only amassed a decent record of 38 wins against 44 defeats. But he and the Hawks would bounce back the following season as they sported an excellent win-loss slate of 60 wins against 22 defeats. Budenholzer would also bag the Coach of the Year award in that season, establishing himself as one of the most promising new head coaches in the league.

He took the Hawks to multiple playoff appearances, but the team started to rebuild at the end of the 2017-18 NBA season. It also marked the end of Budenholzer’s tenure in Atlanta. But because of the tremendous potential and leadership that he showed with the Hawks, Budenholzer became a widely sought after coaching candidate and the Bucks were able to snag him and hire him as their new head coach in the summer of 2018.

Budenholzer immediately made his impact felt at Milwaukee as he led the team to 60 regular season wins in his first year. His arrival to the team also coincided to Giannis Antetokounmpo’s growth as a player, and that resulted into an excellent partnership between the two. In an appearance with local media a month back, Horst pointed out how important it is for the team to secure the services of Budenholzer for the years to come. As per a column written by Jim Owczarski of the Milwaukee Journal Sentinel, Horst reiterated that extending Budenholzer’s contract was certainly a priority for the team moving forward.

“I think it’s obviously important. You look at, collectively, from an organization – (owners) Marc (Lasry), Wes (Edens), Jamie (Dinan), Mike (Fascitelli), (team president) Peter (Feigin), myself, “Bud” – partnering, working together, some pretty high level goals over the last three or four years of retaining our talent, building an organization that has sustainability, compete for championships, the things that we’ve been able to do – have the most regular season wins, the most playoff wins, two Eastern Conference finals, an NBA championship now, Giannis (Antetokounmpo) signing to stay with us, Khris (Middleton) deciding to stay with us, acquiringJrue (Holiday), that’s not me, that’s not Marc, Wes and Jamie, that’s not Peter, that’s not ‘Bud,’ it’s us.

Doesn’t mean that we’re going to do it again next year or that we’ll ever do it again, but collectively I think we’ve proven that we can work really well together. We can accomplish big things. We have a mission, we’re all pulling in the same direction and Bud’s an incredible partner, someone I want to work with for as long as I possibly can, the player’s want to work with and our ownership trusts and believes in. So, that’s the goal. Absolutely.”

Of course, the road gets tougher for the Bucks moving forward. The other teams in the Eastern Conference have gotten even better. The Miami Heat, who already has Jimmy Butler, Bam Adebayo and Tyler Herro, will now be fielding in newly-signed point guard Kyle Lowry, a fully-healthy Victor Oladipo, and veteran defensive-minded power forward PJ Tucker, who interestingly helped bring a championship for the Bucks last season.

The Brooklyn Nets are still the favorites in the East as their three superstars in Kevin Durant, James Harden, and Kyrie Irving will be building up their chemistry following a disappointing season. There is also the fact that Tucker has moved to Miami, depleting the Bucks of a defender who can effectively guard all five positions.

While it is true that the Bucks lost Tucker to the Heat, it is also a fact that young shooting guard Donte DiVincenzo will be coming back next season after undergoing an ankle surgery a few months back. In his third year in the league last season, DiVincenzo averaged career-highs of 10.4 points, 5.8 rebounds, 3.1 assists and 1.1 steals per contest. He also shot a decent 38% clip from the three-point line, which shows a drastic improvement in his outside shooting.

In that same column, Horst pointed out that while it is a fact that DiVincenzo had a very successful surgery, he said that it is too early to know if the young combo wing can join the team at the start of the team’s training camp. Horst also answered a couple of questions about DiVincenzo’s contract and how his injury would affect his contract extension negotiations.

“Really too early to know. Incredibly successful surgery, he’s doing everything he can right now to be ready as soon as he possibly can. Just kind of the way this one works it’s just going to be a little bit before we really know what the timeline looks like. Because it’s just going to be based on strength and conditioning. We’re not going to put Donte in a position where he’s not healthy and not ready to come back and put him out there too early. So, it’s too early to know. But he’s ahead of where he should be at this time and he’s doing an incredible job right now.

Donte and I have talked about this a little bit and I’ve talked with his agents, that whole thing, it gets complicated. Injuries complicate things. But that doesn’t mean that we have a lack of information on Donte. We know who Donte is, we know what he can do on the floor. We have complete confidence in his health. This is not some sort of injury that he had that players struggle to come back from. There’s no questions on Donte.”

The Bucks will still rely heavily on their three stars in Giannis, Khris Middleton, and Jrue Holiday. Middleton and Holiday are coming off successful stints with the Team USA in the recently-concluded Tokyo Olympic Games.