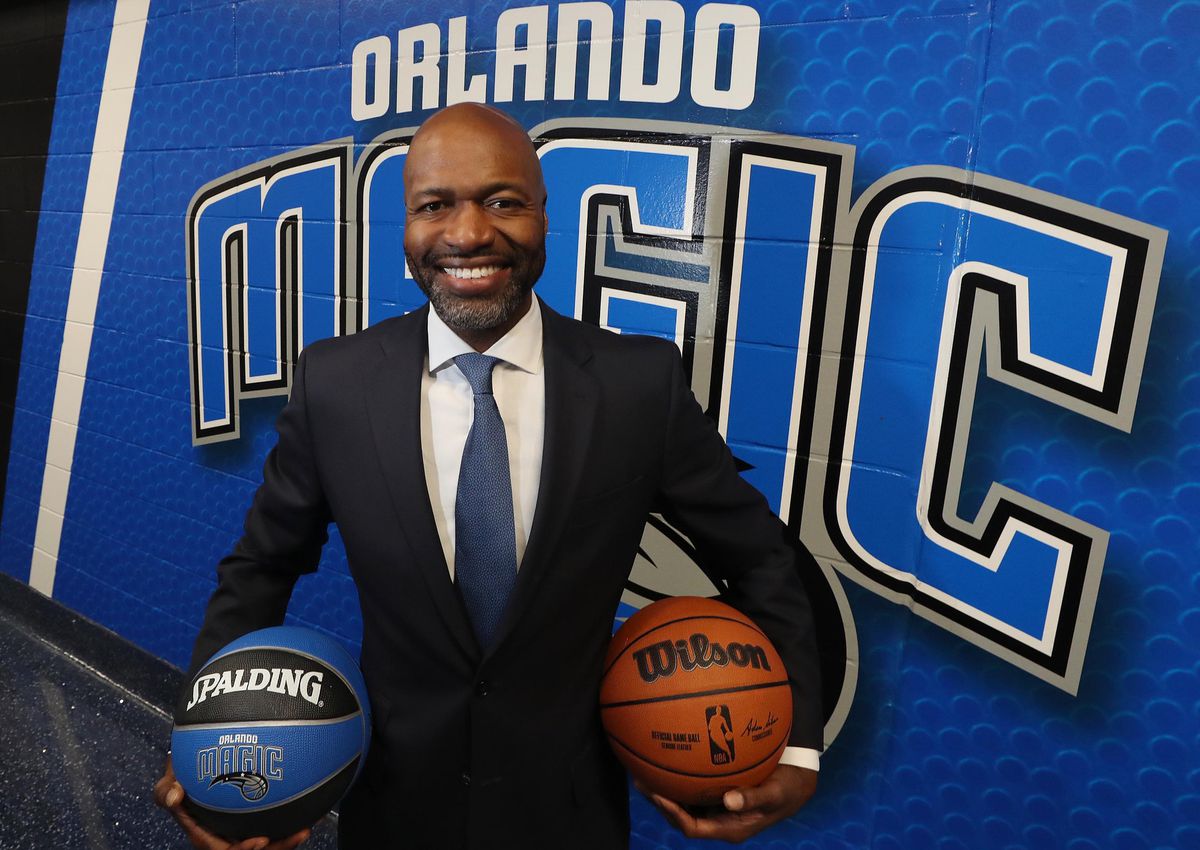 With the Orlando Magic setting their sights towards rebuilding for the future, they will be bringing in a new voice inside the locker room and on the sidelines. As per a report by senior NBA insider Adrian Wojnarowski of the ESPN, the Magic front office has decided to hire former Dallas Mavericks assistant coach Jamahl Mosley as their new head coach.

Mosley, who is one of the younger assistant coaches in the league, will be turning 43 years of age this October. He will be replacing Steve Clifford, who was the Magic’s head coach in the past three seasons. Clifford was able to steer the Magic to two consecutive playoff appearances, but it was obvious that they do not have the roster talent and depth to escape the first round of the postseason. The Magic front office then opted to rebuild this season, trading away their key cogs to make way for more draft assets and young talented players. It was already expected by then that Clifford’s time with the Magic organization was steadily closing.

Wojnarowski also noted that it was not just Mosley who was at the top rung of the ladder in their search for a new coach. He pointed out that Denver Nuggets assistant coach Wes Unseld Jr. was also a frontrunner for the job, but it was Mosley that the Magic front office ultimately decided to hire. Mosley’s name made huge waves last week when Mavericks superstar point guard Luka Doncic publicly endorsed him for a potential head coaching role in the league. Mosley has been with the team ever since Luka first suited up for Dallas during the 2018-19 NBA season.

The Magic are replacing Steve Clifford, who mutually parted with the team  last month. Orlando had reached the playoffs in consecutive years before trade deadline deals including All-Star Nikola Vucevic (Chicago) and Evan Fournier (Boston) this season moved them into rebuilding mode. The Magic's           search process had narrowed to two candidates, Mosley and Denver assistant Wes Unseld Jr., who has also emerged as one of the leading candidates for the Washington Wizards' vacancy, sources said earlier this week.

Mosley's role with the Mavericks over the past seven years has notably included his close connection and impactful work with All-NBA guard Luka Doncic. After Mosley replaced a quarantined Rick Carlisle for a Mavericks victory over the Knicks in Madison Square Garden in April, Doncic told           reporters of Mosley, "He's got the things needed for a head coach." Mosley, 42, spent the past seven years with the Mavericks under Carlisle, ultimately taking on the associate head coaching role. Mosley also served on the staffs of  the Cleveland Cavaliers (2010-2014) and Denver Nuggets (2005-2010). Mosley's offensive philosophy has been shaped under two Hall of Fame-level coaches: Carlisle and George Karl.

Mosley has been on the coaching field in the NBA since 2006. He first started as an assistant coach and player development coach for the Nuggets, spending four years there fulfilling the said role. He was then hired by the Cleveland Cavaliers as an assistant coach in 2010, the same summer when LeBron James opted out of Ohio to take his talents to South Beach and join Dwyane Wade and Chris Bosh in the Miami Heat squad.

Interestingly, when LeBron made his way back to Cleveland in 2014, the Cavaliers front office let go of Mosley, and at that point he accepted the important and valuable role of an assistant coach for the Mavericks. Since the 2014-15 season, Mosley has been on the Mavericks camp, establishing himself as one of the prime candidates for a potential head coaching role within the league.

Before he tested the waters of coaching in the NBA, Mosley was also a basketball player himself. He played college ball for the Colorado Buffaloes, where he played all four years of his eligibility. Mosley, a 6-foot-8 power forward, played a role off the bench in his freshman year, but eventually was inserted into the starting line-up during his sophomore year. Mosley put up decent averages of 11.4 points, 6.6 rebounds, 0.8 assists, 0.7 steals, and 0.6 blocks per contest in his four years of college ball at Colorado.

However, Mosley never played in the NBA. He had professional basketball stints at Mexico, and in the Australian National Basketball League (NBL). Mosley would also suit up in Finland and in South Korea, where he would play for the Seoul Samsung Thunder, which was interestingly the last stop of his playing career. Right after he finished his playing career in South Korea, Mosley started his NBA coaching career by landing a gig with the Nuggets as their player development coach and scout. He was then relegated to an assistant coach role two years later.

As per a column written by Josh Robbins for The Athletic, former Mavericks head coach Rick Carlisle had heaps of praises for Mosley. Carlisle, who parted ways with the Mavericks and landed another head coaching role this time with the Indiana Pacers, says that there is no doubt that all the players that Mosley handled and taught definitely love him as a coach and as a person.

““That 30-second clip of how the players responded to him coaching that game — it looked like a World Series Game Seven victory celebration in the locker room. I see him as the basketball version of a young Mike Tomlin from the Pittsburgh Steelers: a natural leader of men who builds strong,     meaningful  relationships. Players will love his energy and his enthusiasm and knowledge for the game. I just had this belief that players will not allow  him to fail. He was close to all our players.

They all loved him. People saw him working with Luka before games and  stuff like that, and he had a great relationship with him. But it wasn’t specific to only Luka Doncic. (Jamahl’s) very consistent with all the players. To a man, if you talk to every one of the guys that played on our team in  Dallas, I believe they would tell you that. He’s willing to take on all different kinds of challenges, whether it’s something in player development, whether it’s something having to do with defending a great player. You name it, he’ll get it done.”

But of course, there is still a lot of work left to do for the Magic front office. They finished this season with a paltry record of 21 wins against 51 defeats, signalling the start of a rebuilding movement. They traded away their key cogs, particularly All-Star big man Nikola Vucevic, versatile combo forward Aaron Gordon, and veteran scoring swingman Evan Fournier.

It will be tough but this is part of rebuilding for the future. The Magic roster is now brimming with young and up-and-coming talented players such as Wendell Carter Jr., Markelle Fultz, Cole Anthony, Jonathan Isaac, Chuma Okeke, Gary Harris, R.J. Hampton, and Mo Bamba. These are not top-tier players in terms of untapped talent in the league, so it means that Mosley and his coaching staff has their work cut out in front of them.

One of the most interesting storylines in this Magic roster is the recovery of Fultz from a major knee injury. Fultz was in the midst of another good season when he suffered a torn ACL injury on his left knee. He was putting up all-around numbers of 12.9 points, 3.1 rebounds, 5.4 assists, and 1.0 steals per contest before the unfortunate injury happened. While it is true that his shooting percentages still leave more questions than answers, his ability to do almost everything on offense will be a bright spot in the Magic’s future.

As per a separate column by Robbins for The Athletic, Fultz says that this recent injury just adds another chip on his shoulder. He says that he is putting his full trust on the Magic’s medical staff, and that everything happens for a reason.

“Seeing what my (team’s) medical staff has done with people who had ACL injuries, I know they have some experience with that. That also gives me a little bit of confidence going into it, and I have a little bit of a blueprint to see how it goes and how it feels. I have people to ask questions that are my peers, somebody who I can relate to, which also gives me a boost of confidence going into it knowing that they’ve come back stronger and better.

It just puts another chip on my shoulder again, to come back and play for this organization and the city, and just give it my all. (I want to) just show them the love that I have for the city and how thankful I am for the opportunities that they’ve given me. It’s been rough, just with the love I have for the game  and, of course, just wanting to be as competitive as I can on the court. That’s been the tough part about it. But again, everything happens for a reason. So, it’s just been a blessing. I’ve just been able to really get a chance to watch my teammates’ games, and try to learn … what I feel like their strengths are, what I feel I can help them with. So that’s really just been a big learning experience since I’ve been sitting out. But it’s been extremely tough.”

Still, it is completely obvious that Fultz has untapped potential in him. That also goes for his teammates, who need a figure to help bring out the best in them. That is where Mosley’s vast experience in player development will enter the picture, and this is probably the main reason why the Magic front office opted to bring him on board.

On top of all the names listed in this article, the Magic will also have the luxury of selecting two players in the first ten picks in the upcoming 2021 NBA Draft. They will have their first selection with their 5th pick, followed by the 8th overall selection that they got from the trade with the Chicago Bulls. It is without a doubt that player movement is on-going in Orlando.