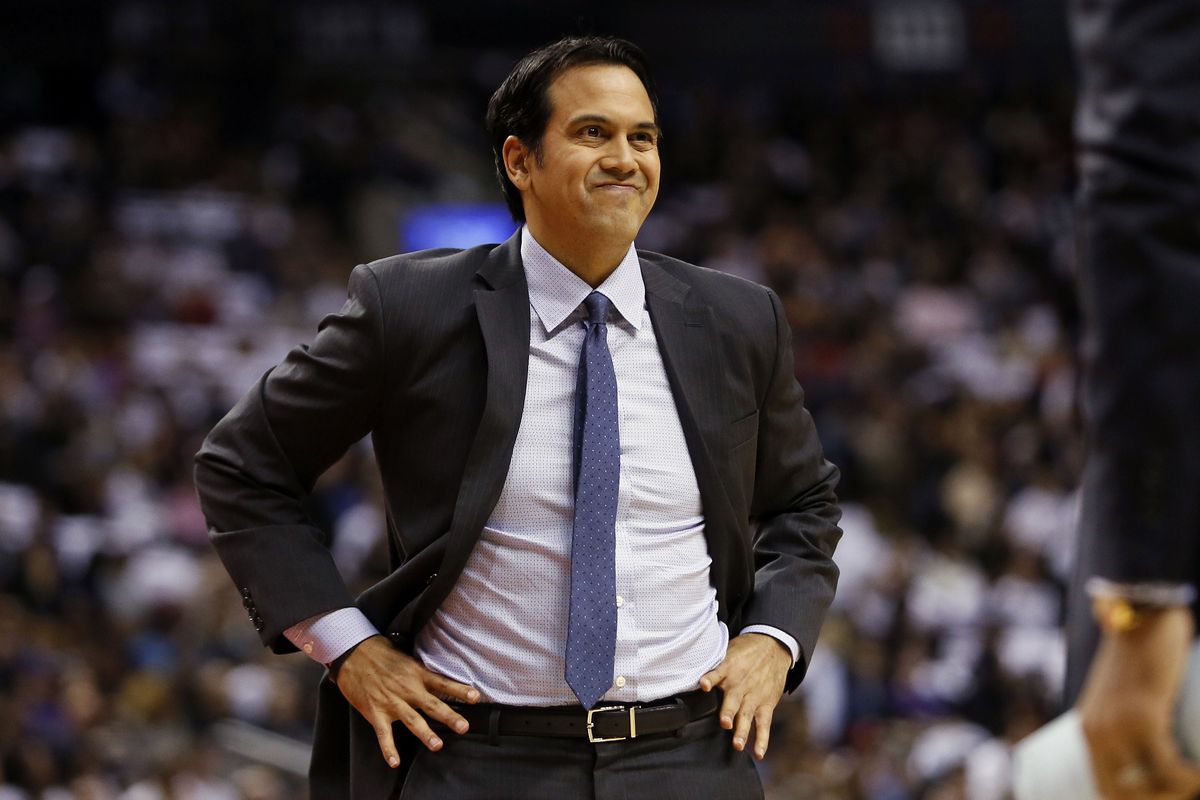 Erik Spoelstra’s incredible story of working his way up from being just a video coordinator to becoming a champion head coach is a widely-documented. Now holding up two championship rings for the Miami Heat, Spoelstra has become one of the most respected coaches in the best basketball league in the world. He has worked with almost all kinds of players – from Hall of Famer caliber superstars like Dwyane Wade and LeBron James, to unproven yet very productive rookies such as Tyler Herro and Kendrick Nunn.

The Heat’s surprisingly great campaign this season just shows how resourceful and committed Spoelstra is in making the most out of the talent he has on the roster. With Jimmy Butler expectedly taking on the main man role for his new team, this is the year that we have seen him turn into a fully-fledged all-around leader. Miami also traded Hassan Whiteside last summer, giving the frontcourt keys to an unproven young big man in Bam Adebayo. But lo and behold, Adebayo not only became the anchor of the team’s defense but he also grew into a playmaking big and eventually an All-Star.

Even his rookies have plenty of positive things to say about Spoelstra. Herro, who could have been an easy frontrunner for the Rookie of the Year award had he not sustained injuries throughout the season, says that Spoelstra has taught him how to be a defensive player. During an appearance on Portland Trail Blazers star CJ McCollum’s Pull Up podcast, Herro says that Spo has been very hands-on on his progress on and off the court.

“Coach Spo, he called me the other day and he just wanted to make sure like I was keeping up on the routine. He said that’s going to be the biggest thing. We’re really just trying to stay productive, whether it’s reading a book or doing something different. Trying to better yourself in a different way during this time.

He teaches in a different way that’s unique, different than coaches that I’ve had before. He always pushes me defensively, that’s where he’s on me every single day.  He doesn’t care about my offense at all. He’s just on me every day about my defense.”

As for Spoelstra, this is his 12th year as head coach of the Heat. He has compiled a stellar record of 564 wins against 387 losses while leading them to eight playoff appearances, four Finals trips and two successful championship runs. He has went through every obstacle and challenge that an NBA head coach has to endure, and he has worked through it with his calm and mild-mannered leadership approach.

But more than his calm approach on the court, Spoelstra has also successfully instilled a tough, winning culture not just on his players but in the whole Heat organization. The Heat is now popularly known for their strict fitness regimen, as well as their knack for having tough-minded players.

It is the main reason why Butler chose Miami when he became a free agent last summer. He has been part of a tough-minded team while playing for the Chicago Bulls squad that boasted the likes of Derrick Rose, Joakim Noah and Luol Deng. Early into the season, Butler already expressed how happy he is to be donning the Heat jerseys, as per K.C. Johnson of NBC Sports Chicago.

“It’s our whole organization. Everybody is around the work every day. Everybody is putting their time in. It just makes me smile because that’s what I do. I don’t got too much to say. It makes it fun because when you put in that much work, you’re not doing it for no reason. You’re doing it because you want to win.

Everything is phenomenal now. Like I tell everybody, I’m happy, man. We’re winning.We’re competing at a high level. Organization is great — people around it, teammates. I want to see what happens whenever it’s not going so well for us. I don’t want to lose two in a row or three in a row; don’t get me wrong. But whenever it isn’t the way that we want it to be, how are we going to respond? That’s going to be a test for myself and everybody else here.”

But it is not just Butler who is thriving in the Heat culture. This is the first time in years that All-Star point guard Goran Dragic has come off the bench. Yet, the veteran has bought into Spoelstra’s game plan and is now a candidate for the Sixth Man of the Year plum. Undrafted players like Nunn and Duncan Robinson are now producing big-time numbers as starters, while underrated role players such as Derrick Jones Jr and Meyers Leonard continue to be instrumental in their specific roles.

So for Spoelstra, the decision to stay in Miami is definitely a no-brainer. He has been part of the Heat family for almost three decades, and team president Pat Riley’s trust in him has been unwavering. In a recent interview with SiriusXMNBA analysts Rick Kamla and Jason Jackson, Spo says that he takes a great pride in maintaining the culture that the Heat organization has held over the years.

“I love working for this franchise. I feel a great sense of purpose for that, to be able to carry on, be a caretaker of this culture that I did not create. This was Micky and Pat created this culture. And some people might think they need to venture out on their own to create their own image or whatever. I do not have any of those kind of feelings. I feel a sense of purpose by carrying this culture on and this legacy to future teams.  And it’s what I enjoy. It’s what fills my cup up. So, I just want to keep this going as     long as I can. I just love being a part of this association. I love being part of this team.   I grew up in an NBA family, and it doesn’t feel like a job. I’m motivated every day to show up and try to add value to the organization, add value to all the guys in the locker room.”

With the season currently suspended, Spoelstra and his coaching staff still have tons of work to do. They need to be in touch with their players to remind them to be active and always keep their bodies in game shape. The Heat are currently sitting on the 4th spot in the Eastern Conference, and they need to be in their best shape when they go up against powerhouse squads like the Milwaukee Bucks, the Toronto Raptors and the Boston Celtics.

Miami also has some personnel movement problems to handle if the NBA decides to just cancel the season and proceed with the draft and the free agency. Jones is set to become a free agent in the offseason, and the Heat front office has to decide if they let him walk or offer him a multi-year contract that should be a lot higher than the two-year, $3 million deal they agreed upon in 2018.

On top of that, Dragic’s contract will also expire. There is no doubt that the veteran guard will garner another big payday, probably his last lucrative contract now that he is entering the twilight of his career. The best scenario for the two parties would be if Dragic agrees to sign a one-year deal with the Heat. Riley has been positioning the franchise’s cap space to be financially-flexible by 2021, the year when tons of big-name superstars are entering free agency.

Other than Dragic and Jones, Leonard will also become a free agent, stripping them of a starting center. Recently-acquired 3-and-D stalwart Jae Crowder’s contract will also expire after this season.