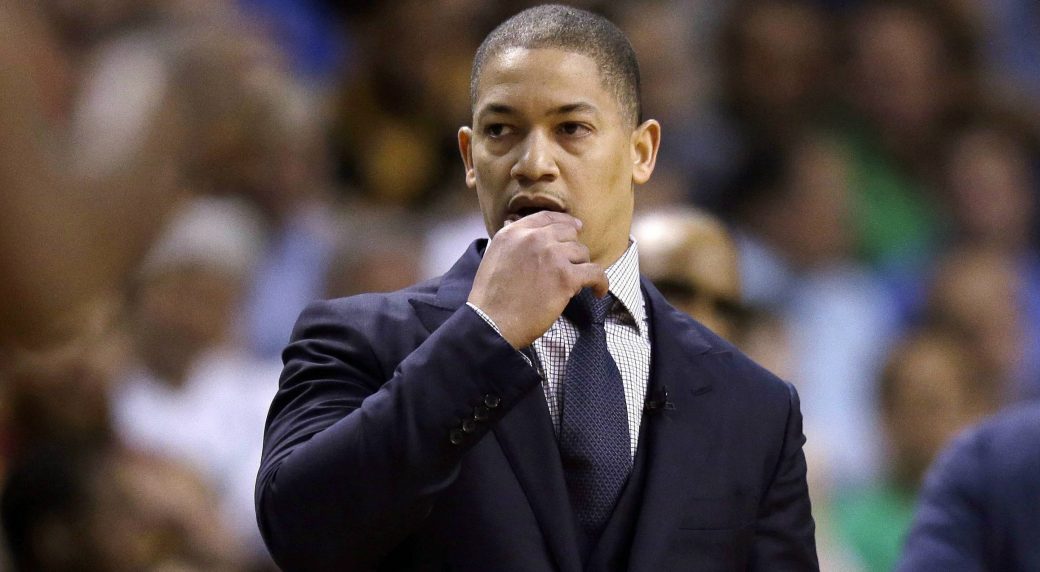 NBA Coaching Report: Tyronn Lue Likely to Get a New Job Next Season

Los Angeles Clippers assistant coach Tyronn Lue is unlikely to stay as a deputy beyond the current season. The one-time NBA champion will reportedly be a strong candidate for several head-coaching vacancies in the offseason.

Lue is currently focused on helping Clippers head coach Doc Rivers in their title aspirations this season. Los Angeles is tagged as one of the favorites to win the title this year. However, once the season is done, Chris Mannix of Sports Illustrated said that Lue will likely become a head coach again.

"If the buzz around Lue in the NBA bubble is correct, that may be the length of his tenure with Los Angeles," Mannix said of Lue. "Lue is expected to be a leading candidate for what could be several NBA coaching openings, multiple league executives told Sports Illustrated."

Lue is a high-profile assistant coach, having won a championship as a head coach during his tenure with the Cleveland Cavaliers. The 43-year-old coach took over in Cleveland in 2016 when the Cavaliers fired David Blatt despite having the best record in the Eastern Conference at that point at 30-11.

The decision to fire Blatt midway through the season worked wonders for the Cavaliers, as Lue led Cleveland to their first championship in franchise history despite going down 1-3 in the 2016 NBA Finals against the Golden State Warriors. He was eventually fired during the 2018-19 NBA season after having a 128-83 record with the team.

All coaching positions are currently filled after the Knicks decided to sign Tom Thibodeau as their new head coach. However, Mannix said that there would be several vacancies after the current season. One of the teams that are expected to do a coaching search is the Brooklyn Nets. The Nets are expected to strongly consider hiring interim coach Jacque Vaugh after a 5-2 record in the bubble, but Lue will get a strong chance because of his credentials.

"Jacque Vaughn has been brilliant in the bubble, leading Brooklyn to a 5-2 record despite missing Kevin Durant, Kyrie Irving, Spencer Dinwiddie, DeAndre Jordan, Wilson Chandler, and Taurean Prince. Vaughn will get strong consideration to retain the job," Mannix said. "But with Durant and Irving returning from injury next season and the Nets expected to contend for a championship, ownership prefers a national search."

The New Orleans Pelicans might also part ways with head coach Alvin Gentry after having another disappointing season. The Pelicans had high hopes heading into the NBA Restart, but they failed to live up to expectations, leading to speculations that Gentry will eventually get his pink slip after their stint in Orlando.

Lue is also expected to get a shot if Gentry gets fired considering his previous relationship with Pelicans executive vice president of basketball operations David Griffin. Griffin was Cleveland's general manager when Lue took over from Blatt and was already out of the Cavaliers when they made another coaching change.

Houston might also look for a new head coach if they fail to make a lot of noise in the postseason. The veteran coach is in the final season of his contract with the Rockets. The two sides sat down before the season to talk about a contract extension but no deal was reached.

"While the Rockets have publicly supported D’Antoni, he is in the final year of his contract," Mannix said. "An early playoff exit -- the Rockets are in the middle of the Western Conference playoff picture, while Russell Westbrook’s quadriceps injury will keep him out for at least the final seeding game this week -- could give Houston reason to make a change."

Brett Brown's status in Philadelphia is also hanging in the balance. An early playoff exit this season might end up as the final straw for Brown. The 76ers are in a tough situation, as they will face the Boston Celtics in the first round of the playoffs without superstar Ben Simmons. According to Ryen Russillo on the Bill Simmons podcast, there are talks about the possible firing last season, which is also floating around this year.

"It was just a foregone conclusion that Brett was going to get fired if they didn't do something special [in the 2019 playoffs]," Russillo said. "And then, it was like, 'Oh  wow. They kept him.' And I'm telling you now, that same stuff has picked up again."

The Chicago Bulls are also among the teams who could potentially look for a new coach in the offseason. It is no secret that several Bulls players have raised their concerns about Boylen's way of handling the team. However, KC Johnson told NBC Sports that new Bulls executive vice president of basketball operation Arturas Karnisovas and new general manager Marc Eversley will likely keep Boylen at least for next season.

"With the 2020-21 season so uncertain -- when does it start? Will it be 82 games? --and the roster likely to look largely the same, Boylen returns," Johnson said. "Karnisovas and Eversley use the 2020-21 season to evaluate the staff and roster during game action. Then, potential big changes arrive during the 2021 offseason."

Adrian Wojnarowski of ESPN also said that Karnisovas and Eversley are still evaluating Boylen, watching the coach work with the players, and knowing his philosophy. Wojnarowski said that the Bulls front office is not planning to open the search process anytime soon.

While other coaches are fearing for their job security, Boston Celtics Brad Stevens will not be jobless anytime soon. The 43-year-old coach agreed to a contract extension with the Celtics, the team announced in a statement on Wednesday. Terms of the deal were not disclosed.

"Brad is one of the most intelligent and hard-working coaches in the game today," Celtics president of basketball operations Danny Ainge said of Stevens. "More importantly, his character and integrity have contributed to a culture that we all highly value here. Brad is a great teammate, and a leader people want to follow. We are honored to have him with us as we continue to pursue our next championship."

Stevens is coaching in his seventh season in Boston after replacing Doc Rivers before the 2013-14 NBA season. He has a 318-245 win-loss record and is currently the fourth-winningest coach in franchise history – just behind Red Auerbach, Tom Heinsohn, and Rivers. After having a dismal 25-57 record in his first season, Stevens led the Celtics to six consecutive playoff appearances, including two trips to the Eastern Conference Finals.

Meanwhile, the Indiana Pacers are also not ready to make major changes in their coaching staff anytime soon. The Pacers also agreed to a contract extension with head coach Nate McMillan. The terms of the deal were not disclosed, but McMillan revealed that he agreed to a one-year extension, and admitted that it has been on the table since July.

"I just felt that that was appropriate for both sides," McMillan said via ESPN. "Normally I don't do any negotiations until after the end of the season. This has been an unusual season for all of us -- myself, the organization, the NBA. And we've been talking about this and thought that one-year extension was really the appropriate thing for both sides."

McMillan is in his fourth season in Indiana and has led the team to the playoff in each of the four seasons at the helm despite being hit by injuries. This season, the Pacers will end up as the fifth seed in the Eastern Conference despite playing the majority of the season without superstar guard Victor Oladipo, who is still working his way back from a knee injury. Malcolm Brogdon also missed 18 games earlier in the season due to various injuries.

Indiana is also playing without Domantas Sabonis with a left foot injury and will miss the entire season. Jeremy Lamb will also not see action for the Pacers in the postseason after sustaining a season-ending torn anterior crucial ligament, torn later meniscus, and lateral bone fracture.

"What Nate has done in four seasons with our franchise merits this extension," Pacers president of basketball operations Kevin Pritchard said. "Between injuries and changes in personnel, he and his coaching staff have adapted and produced positive results. He also represents the franchise, the city, and our state in a first-class manner."

McMillan has recorded 181 wins against just 136 losses as Pacers coach. With the win against the Houston Rockets on Wednesday, the veteran head coach surpassed current Dallas Mavericks head coach Rick Carlisle as the third-most winningest head coach in Pacers franchise history. With his future secured at least for one more season, the former Portland Trail Blazers and Seattle Supersonics coach is looking forward to having a healthy season next year.

"My hope is that we will be healthy next year and see what we can do with a full roster," McMillan, whose team will face the Miami Heat in the first round of the 2020 NBA Playoffs, told the Indy Star. "I'll have that opportunity and the organization thought it was only fair. It's just another year but I'm OK with that."