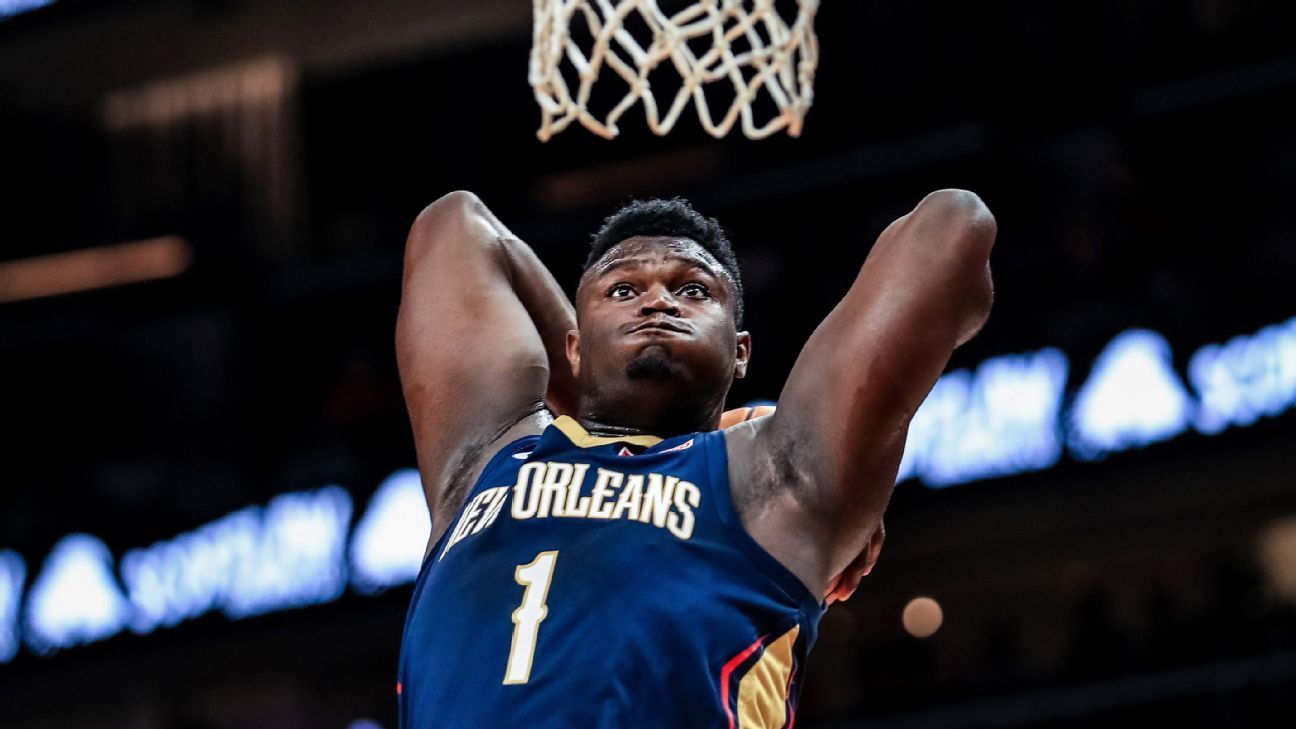 Veteran head coach Stan Van Gundy drew a lot of flak during his most recent coaching stint with the Detroit Pistons, but he did not remain jobless for long. Van Gundy got another crack at coaching because the New Orleans Pelicans love his ability as a teacher of the game and the fact that most of the criticisms he received in Detroit were about the moves he made as a team executive, not as their coach.

With Van Gundy at the helm, experts believe that the Pelicans have nothing to go but up. There is a growing consensus that the veteran head coach will do wonders in New Orleans, and will help incoming second-year forward Zion Williamson become a more complete player. It was previously reported that the Pelicans centered their coaching search on candidates who could help their young core realize their strong potential.

According to Brendon Kleen of FanSided, Williamson will benefit a lot from the arrival of Van Gundy. While Williamson is known for his athleticism since his high school days, his explosiveness was a question during the postseason because he sustained a torn meniscus. Kleen believes that Van Gundy will be able to preserve and make Williamson more effective starting in his second season in the big league.

"The freakish leaping ability that allowed Williamson to block 3-pointers and rotate like the Flash in college rarely showed up with the Pelicans," Kleen said. "Where Van Gundy comes in is limiting Williamson’s responsibilities. I wouldn’t expect this Pelicans team to switch a ton, but the makings of an aggressive team defense with Williamson on the backline as a rim protector and rebounder are already in place. At the very least, Van Gundy is likely to work harder with Williamson in this regard than Alvin Gentry was."

Van Gundy is known as an excellent defensive-minded coach. In eight of his 11 full seasons as a head coach, the 61-year-old coach helped his team finish within the top 10 in defensive rating. In 10 of 11 seasons as head coach of the Miami Heat, Orlando Magic, and the Pistons, his team ended up at the upper half of the defensive rankings. This is one of the reasons why many thinks that Williamson will show a lot of improvement on both ends of the floor.

William Guillory of The Athletic also agreed that Van Gundy's arrival will do wonders for Williamson. While there were reports about his struggles to connect with his star players before, Guillory thinks that Williamson has nothing to go but up with Van Gundy constantly on his ears. SVG is no stranger to handling big guys, as he has already coached superstar big men like Shaquille O'Neal, Dwight Howard, and Blake Griffin.

"Van Gundy would be an excellent coach to teach Zion the game and get him to understand winning from a cerebral approach rather than always physically overwhelming others. He’s won 50-plus games five times and has been around some of the most legendary figures in the game over the past two decades," Guillory said. "The ability to pick Van Gundy’s mind daily would be tremendous for Zion because the veteran coach has such a brilliant way of seeing every aspect of the game and how they’re all connected."

Van Gundy has made it no secret that he is very excited to start working with the promising core of the Pelicans. Aside from Williamson, the Pelicans will be bannered by reigning Most Improved Player Brandon Ingram, former second-overall pick Lonzo Ball, and Josh Hart along with 2019 NBA Draft lottery picks Jaxson Hayes and Nickeil Alexander-Walker. New Orleans also owns the 13th pick and three second-round picks in this year's draft.

"I am honored and excited to coach this talented group of players in New Orleans," Van Gundy said via ESPN. "This opportunity was one that I was really attracted to due in large part to David Griffin's record of putting together highly competitive, talented teams in a great family atmosphere. It became clear how committed and invested they are to winning."

Meanwhile, former Phoenix Suns teammate Steve Nash and Amar'e Stoudemire will be reuniting, but this time as coaches. Nash was named as the new head coach of the Brooklyn Nets after their NBA bubble exit, which was a hiring that caught the league by surprise. With Nash at the helm, the former two-time NBA Most Valuable Player added a familiar face to his staff, as first reported by Shams Charania of The Athletic.

"Six-time All-Star Amar’e Stoudemire has agreed to a deal to join new Brooklyn Nets coach Steve Nash’s staff as an assistant coach," Charania said on Twitter. "Nash and Stoudemire starred together in Phoenix. Stoudemire and Nash formed the league's lethal pick-and-roll duo for years in Phoenix -- one Kevin Durant and Kyrie Irving are sure to duplicate. Stoudemire will focus on player development in Brooklyn."

Stoudemire has no previous coaching experience like Nash, and is expected to rely on his vast knowledge he gained while playing in the NBA and overseas. Since his stint with the Miami Heat in 2016, Stoudemire has bounced around, playing as reinforcement in China and Israel. The former superstar was named as the Israeli League Finals MVP earlier this year after leading Maccabi Tel Aviv to a third consecutive championship.

The hiring drew mixed reactions with some saying that Stoudemire would be a great teacher to Brooklyn's young big men like Jarrett Allen, while some labelling it as a locker-room hiring. Jack Maloney of CBS Sports thinks that Nash added Stoudemire make his transition to coaching easier. While he is assigned to handle player development, Maloney thinks that the six-time NBA All-Star will have an impact inside the locker room.

"This isn't to take anything away from Stoudemire's basketball knowledge, or how he can help the team's frontcourt players, but it feels like this move is as much about the vibes inside Brooklyn's locker room as it is about Xs and Os or coaching acumen," Maloney said. "After all, if Nash wanted a more experienced coach, he could easily have found one. Instead, he brought in his friend, someone he trusts and knows better than most people in the league."

Nash also reportedly tried to hire Raja Bell, another former Suns teammate, but the latter declined because he wants to focus on his family and coaching his kids. Dallas Mavericks legend Dirk Nowitzki also confirmed that his former teammate approached him about his interest in becoming his assistant coach, but he also declined. Nowitzki told The Dallas Morning News that he does not see himself being in another place other than Dallas.

"First of all, I don’t know if I could do it anywhere but here," Nowitzki said when asked about Nash's offer to join his coaching staff. "That’s of course first. Second, I just think the timing is not right. I love being with the family. I’m so over basketball at this point that it wasn’t even a thought for me."

Nowitzki reportedly has an outstanding offer from Mavericks team owner Mark Cuban about rejoining the franchise in any position that he likes -- whether it is coaching or part of the team's front office. The former NBA Most Valuable Player spent his entire 21-year career with the Mavericks, leading Dallas to two NBA Finals stint, including their successful title run in 2011, where they beat the star-studded Miami Heat.

Meanwhile, former Nets head coach Kenny Atkinson might find his new home soon. According to Marc Stein of the New York Times, the Los Angeles Clippers are reportedly interested in adding Atkinson to their coaching staff. The Clippers recently named Tyronn Lue as their new head coach and are also targeting former Cleveland Cavaliers head coach Larry Drew to fill one of the assistant coaching positions.

Atkinson has been mentioned in numerous coaching vacancies this offseason but has yet to get an offer. He is not expected to become jobless for long, though, as he has received positive feedback for his work in Brooklyn, turning the Nets from a cellar-dweller to a playoff team. He was also credited for developing young players like Caris LeVert, Spencer Dinwiddie, and Jarrett Allen.

He was fired earlier this year and was replaced by interim head coach Jacque Vaughn. Nets superstars Kyrie Irving and Kevin Durant reportedly had a hand in the decision to let go of Atkinson, but both superstars have already denied the allegation. In fact, Irving recently praised Atkinson for his performance during his tenure as coach and reiterated that he was not involved in the decision to let go of the 53-year-old coach.

"I want to give a shout out to Kenny Atkinson because some people came out and was like, Ky and KD got Kenny fired. And look, that was completely false," Irving said. "Listen, Kenny was great for the group that he served, and I was very appreciative of   what he was giving us throughout the season when we were playing."