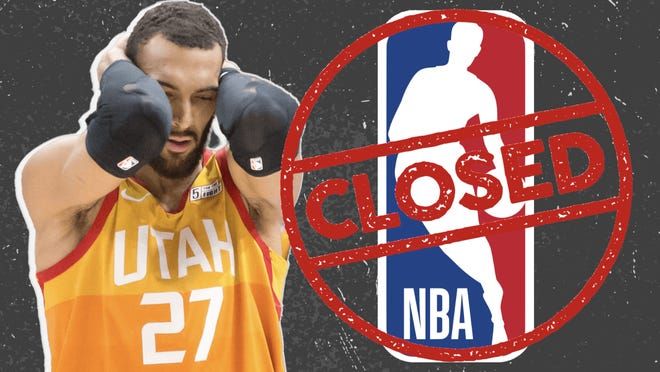 With millions and millions of basketball fans wondering what will happen to the current NBA season and its future, league commissioner Adam Silver has finally addressed these questions through an exclusive interview with ESPN’s Rachel Nichols. Silver has met with league officials and team executives several times since the coronavirus outbreak was heard all over the world. The league initially intended to have games without live fans, but Utah Jazz big man Rudy Gobert’s positive testing for the virus ultimately forced Silver’s hand to suspend the season.

In his statement during the interview, Silver wrapped up what he has in his mind through the three options he provided regarding the resumption of the current league schedule.

"One is, when can we restart and operate as we've known it with 19,000 fans in buildings? Option two is, should we consider restarting without fans, and what would that mean? Because, presumably, if we had a group of players, and staff around them, and you could test them and follow some sort of protocol, doctors and health officials may say it's safe to play.

A third option that we are looking at now ... the impact on the national psyche of  having no sports programming on television. And one of the things we've been talking about are, are there conditions in which a group of players could compete -- maybe it's for a giant fundraiser or just the collective good of the people -- where you take a subset of players and, is there a protocol where they can be tested and quarantined and isolated in some way, and they could compete against one another? Because people are stuck at home, and I think they need a diversion. They need to be entertained."

The NBA has always been an entertainment source for a lot of fans, even those who are not avid followers of basketball. Without the support and the revenue that the league receives from the millions of people who watch the game live, teams will also lose millions of profit in the process. There are already speculations that the salary cap will be much lower next season.

But then again, this is more than the business and entertainment side of the NBA. The bread and butter of this league is still its players, and their health should be the optimum priority. On top of that, it is not just the players who are present in a single game. Fans, coaches and trainers’ safety are also in great risk if the league rushes to resume, as well as a large number of arena employees and staff who work behind the scenes.

Indeed, it is a big problem for Silver and his people to tackle. But if anything is sure, we can be comforted by the fact that the commissioner has been doing an excellent job in handling all these unexpected issues. With the basketball community reeling from the sudden devastating death of Los Angeles Lakers legend Kobe Bryant, Silver led the way for the league to bounce back and commemorate the legacy that Kobe has left his imprints upon.

There is also the infamous Daryl Morey controversy that led to China’s animosity towards the NBA. Given the fact that the league makes a lot of money from the viewership and merchandise revenue it receives from China’s huge following of fans, this unfortunate happening could have blown to pieces if Silver was not able to handle it well.

Still, this global pandemic caused by the coronavirus is a new territory for the whole NBA and for the whole world. It is not just the NBA who has closed its services, but thousands and thousands of companies in infected countries are affected by the virus. Almost all sports leagues have suspended their games, and a vast number of workers and employees are having difficulties making ends meet due to the suspension of their work.

As for Silver’s plans for the immediate future of the league, it is admirable that he is able to balance the needs of the players and the desire of the fans. There are numerous reports saying that the NBA could forego this season, resulting to a total cancellation of the games under the 2019-20 season. In short, there will not be a single playoff game and no team will be crowned as champions.

Silver definitely hears about this sentiment, and assured everyone that there is still a possibility that the current season can continue after a few months.

"I'm optimistic by nature, and I want to believe that we're going to be able to salvage at least some portions of this season. I would say we have done new and creative things in the past. We experimented with this year's All-Star Game with a unique ending. We've talked about play-in tournaments for going into the playoffs. There may be other things we can do with the format.

I have heard from a lot of our players. ... They're going stir-crazy, they want to play, they want to compete. Players as you know, I mean, unlike a lot of us in our positions we can just go back to what we were doing, but every player is fighting something that's unwinnable, and that's the aging process. So a lost year or lost portion of a season in their careers is very different from other people, so we're gonna try by every means we can to play basketball again, but I say that the safety and health of our players is first, and our fans, which is why I don't want to speculate more on that.”

Of course, we cannot blame fans and players for still wanting the season to resume. Teams have poured in sweat and blood to achieve what they have accomplished this year. There are franchises like the Lakers who have worked their way back to an elite position in the league, while there are superstars like the reigning MVP Giannis Antetokounmpo who wants to prove once and for all that they are do not just rack up the numbers, but can also win the Larry O’Brien trophy as well.

Lastly, Silver also addressed how this suspension could affect the NBA calendar. Under his tenure, Silver has tweaked little changes to the calendar like having a week-long break after the start of the All-Star weekend, and starting the regular season at an earlier date to reduce the number of back-to-back games for each team.

But this suspension of games is unlike any other. It will be at least three months before it is deemed safe for the games to continue. But that is just an optimistic estimate and there is a high possibility that we will wait until August to see our favourite NBA players on the court again.

Here is Silver’s statement on how he and the rest of the league executives are planning to work around the schedule:

"Possibly. Those are things we're always talking about whether they're executives at ... ESPN or Warner Media, together with our regional sports networks. I will say that the conventional television calendar has changed so much, certainly since I got into this business. Prime time means something very different than it used to now that people in essence carry televisions around with them in their pockets.

The summer is viewed differently than it was historically from the television standpoint, so regardless of whether we had been going through all this, it's something that the league office together with our teams has been spending a lot of time on. And we have a lot of our team owners who are technologists, media mavens by background, and so it's something that committees of owners and league officials have been working on a lot, especially over the last year or so."

We are just one week in after the NBA announced its suspension, but it already feels like an eternity. The important thing is we all come out safe and be ready to help out the people who are unfortunately affected by this virus.